Winter hung on far too long this year, and things were getting weird. Not only did I have to put the oil company on speed dial, but the oil delivery man had started to leave a toothbrush and overnight bag here. Things got awkward in the mornings. My poor wife seems to have gotten fused to her long underwear. I don’t think I’ve seen her legs since last September – just two fleecy sticks jutting down from her waist. And the birds! They spent the past month marching around our back yard carrying little signs that read, “No Chirping Until Summer!!” and “We Won’t Chirp! We Won’t Sing! Give Us Back Our F#@%ing Spring!” Things were getting weird, I tell you. I received a postcard from a flock of geese that used to hang out around here. They were good geese. Very polite. But this postcard was anything but.

Dear Morons,
We’re staying in Florida. Have fun freezing your asses off.
Sayonara, suckers!!
– The Geese

I was steeling myself for this new perpetual winter. I could turn the swimming pool into a reserve oil tank. I could chop down the forest for firewood. I could install skis on the car. I could…

And then, just like that, the world thawed. Spring arrived and delivered a weekend that knocked winter on its bony white ass and sent the oil man scurrying home.

Handan and I stepped out onto our deck. We blinked in the bright morning sun and looked around the yard. The fresh air invigorated us. We saw the promise of summer. And then we saw the reality of spring.

Cleanup. And lots of it. Too much for one weekend. But we had to start somewhere, so we started near the new deck.

Since the deck project took far longer than we anticipated last year (The Big Reveal is coming…just as soon as things get a little greener and bloomier around here), we didn’t have a chance to fully clean the area before winter set in.  One of our tasks was to remove the old fire pit. We’ll be building a new one in a new area either this summer or next, but the old one needed to go. It was too close to the deck, and it was squatting on sacred ground: my future grill and barbecue area. 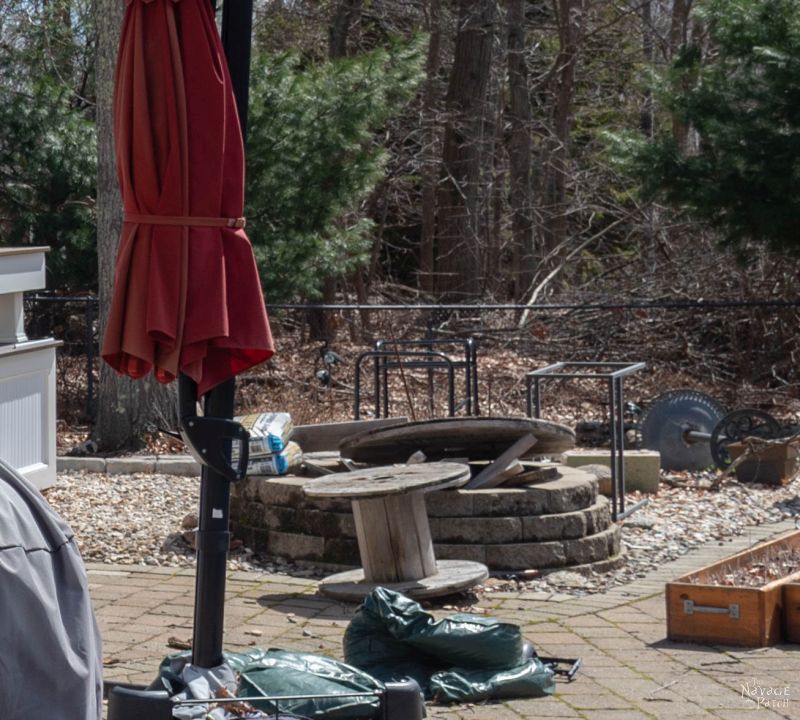 Before we could remove the fire pit, we had to pull all of the crap out of it. Fortunately, we still have a construction dumpster in our front yard that’s been there since last summer. 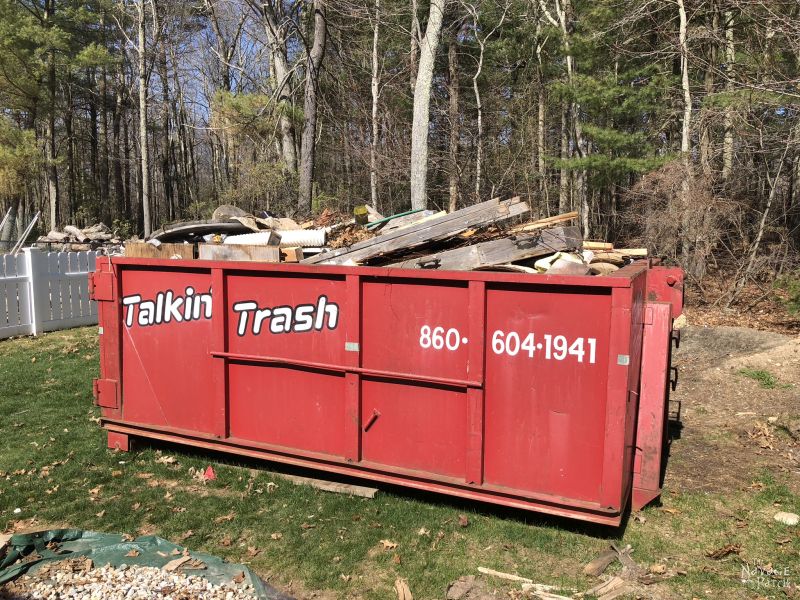 We’ve filled it twice already, and a third will be delivered tomorrow. Though I’m looking forward to quickly filling and getting rid of the last dumpster, it has been great having it around for all our miscellaneous dumping needs. I’m sure Handan has thought about tossing me in there a time or two 😀

Once the junk was cleared, Handan, Barish and I got to work hauling bricks away. 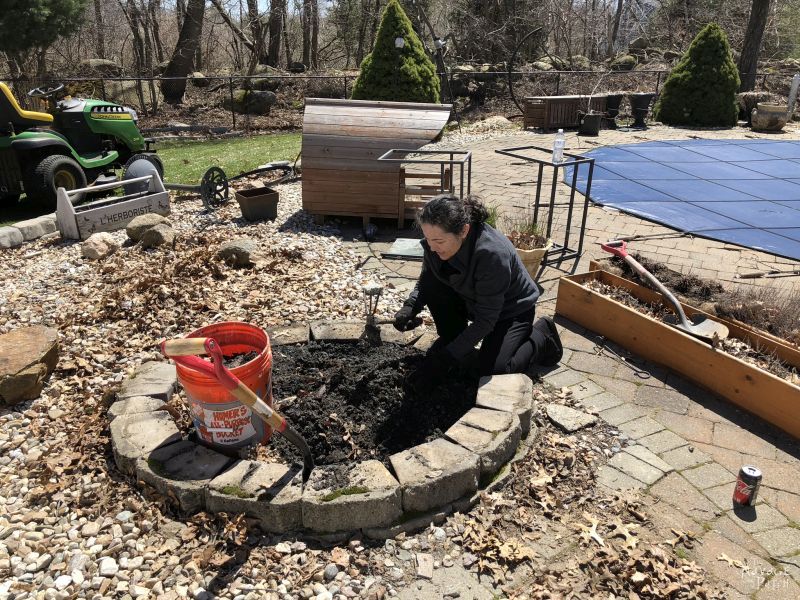 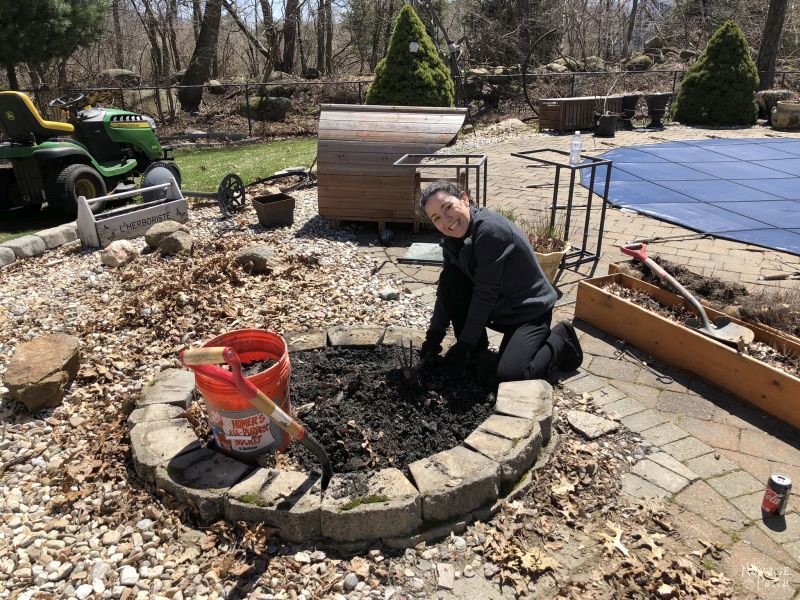 We also needed to remove about 20 years of compacted ash. Handan dug it up and filled 5 gallon buckets which Barish and I lugged to the fence and dumped in the woods. I was hoping we’d find ancient relics and artifacts, but the best we found was a few rusty nails.

Last summer we had a couple of cubic yards of river stone, like the stuff pictured above, delivered and dumped next to the dumpster. We needed it to fill in some low areas around the deck and bring it up to grade. We ordered too much, and then we ran out of summer, so the pile sat through the winter. 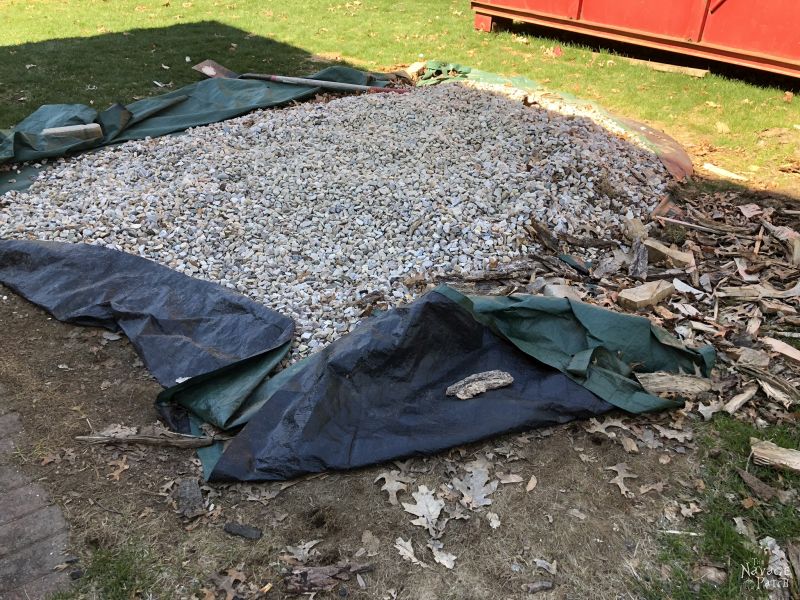 Until this weekend. We first laid down a plastic woven weed barrier, and then we piled on the stone.

Our deck area is now one step closer to being in shape for the summer, and my new grill area awaits! 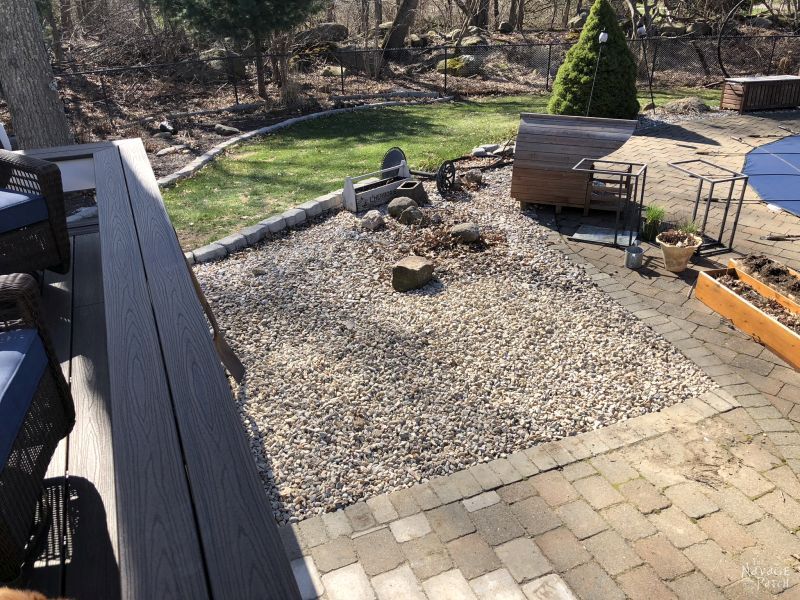 Soon, I will move them over to their new home and the steaks, burgers and ribs will flow like manna from heaven. 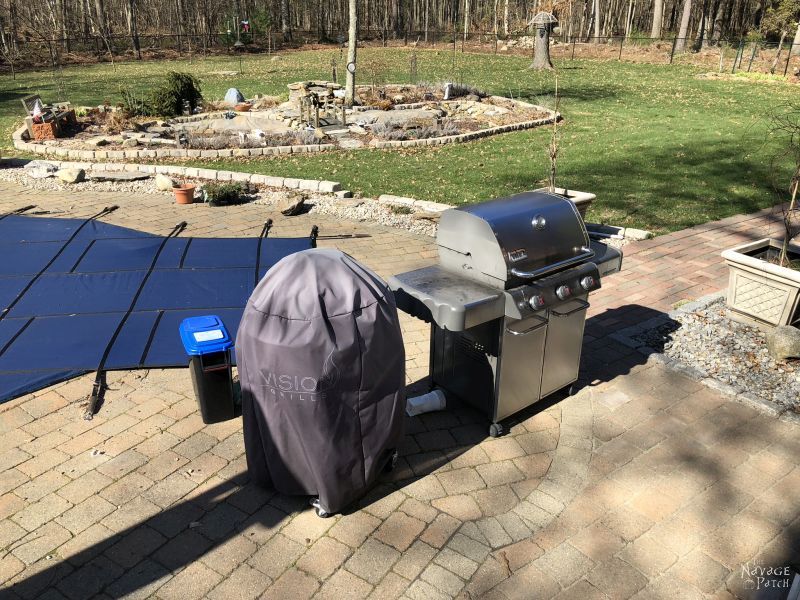 With one task completed, we moved on to the vegetable garden. Something’s been bugging Handan about that area. We made all of the beds from cedar (except three small decorative brick circles), but our blueberry bush enclosure was made from cinder blocks and green metal posts. It was an eyesore, and Handan wanted it gone. 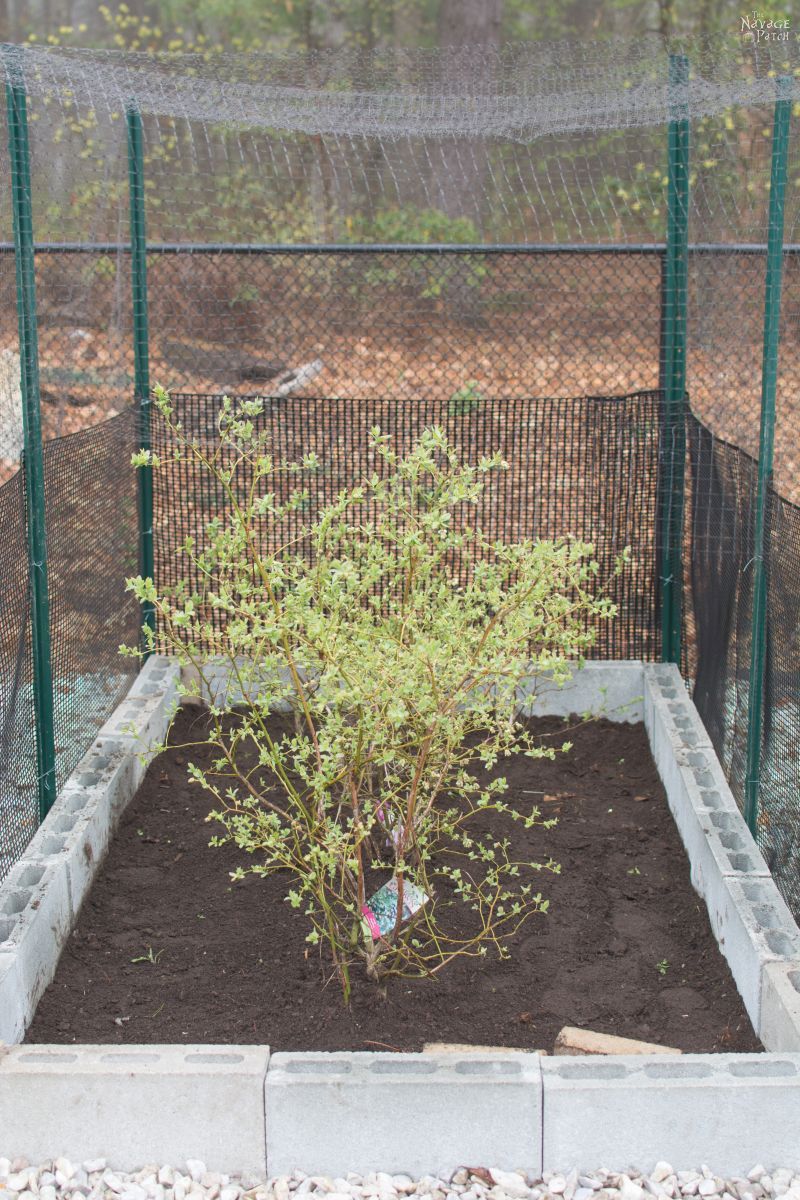 Furthermore, last year it had turned into a lush jungle of weeds, as the enclosure did not allow for easy entry, and if I did manage to get inside, I needed to crawl around like an infant to pull the weeds. We needed a better way.

I assured her that it would be taken care of and that I’d build a new enclosure. She wanted me to build it with the non-ruined remains of 47 landscape logs we had bought and had delivered two years ago. The original plan was for me to build a small fence around the garden area, and I was gonna get around to it, but then….HEY LOOK OVER THERE!

Huh? Oh, I could have sworn I saw something. Anyway, what was I talking about? Ah, yes – I had a plan to build the new blueberry bush enclosure. I told my babes that I would build it while she went inside to take care of some blog business. I set to work removing all traces of the old enclosure.

When I was ready to start building the new one, I called for Handan and Barish to help me. Six hands are better than two, eh? I had gathered the tools I thought I would need: sawhorses, circular saw, drill, screws, impact driver. We decided to widen the bed first, so we’d be able to walk in on either side. Once we had our measurements, I started cutting the logs. Barish found straight ones for me, and Handan helped lay them out. 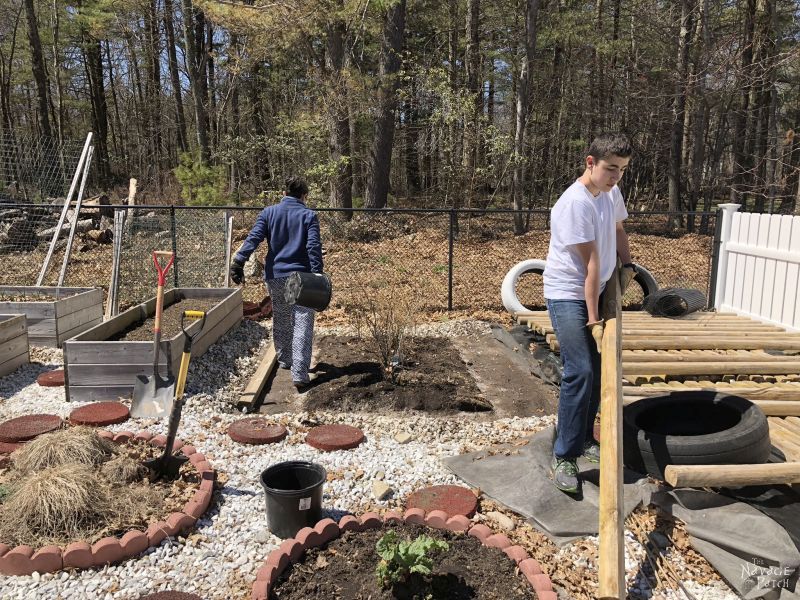 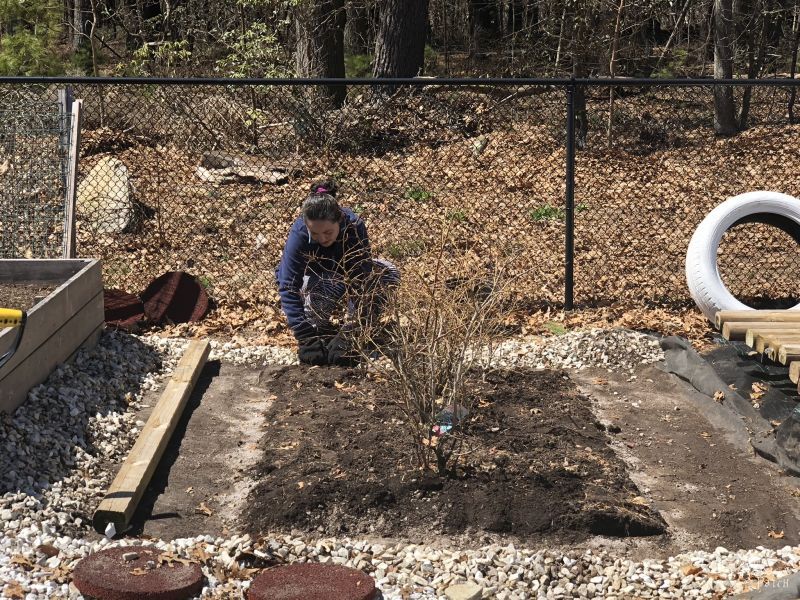 When the first four pieces were cut and laid around the blueberry bushes, I stopped to consider how I’d be fastening them together.

Handan took this pause as a sign that I didn’t have a plan. She hates it when I just barrel headlong into a project on a wing and a prayer.

But I did have a plan! And it would work! But when I tried to explain it to her, either my mouth wasn’t cooperating with my brain or her ears had become disconnected from hers. She wasn’t getting it, and I was having trouble explaining it. Finally I just blurted out, “Well, you’re an engineer, can’t you figure it out?”

As helpful as that sounds, oddly it didn’t help matters at all.

After a few more minutes of me lamely attempting to explain my very fuzzy vision for the blueberry enclosure, and after Handan all but giving up and telling me to go to Lowe’s to go drop a bunch of money on cedar planks, I was able to get our frequencies in tune. She understood! (I think this was more due to her figuring it out on her own than me explaining) We’d use 12 inch galvanized spikes to secure the first course into the ground. They were also bought two years ago when we bought the logs. My original plan was to use deck screws to to fasten each new layer to the one below it, but Handan suggested we keep using the galvanized spikes.

It was a good plan, and we set to work. With the help of a yard-long carpenter’s level, a 3/8 inch drill bit, the galvanized spikes and a framing hammer, we got the first course set and level. We used bricks and stones to prop up the logs on the lower side. 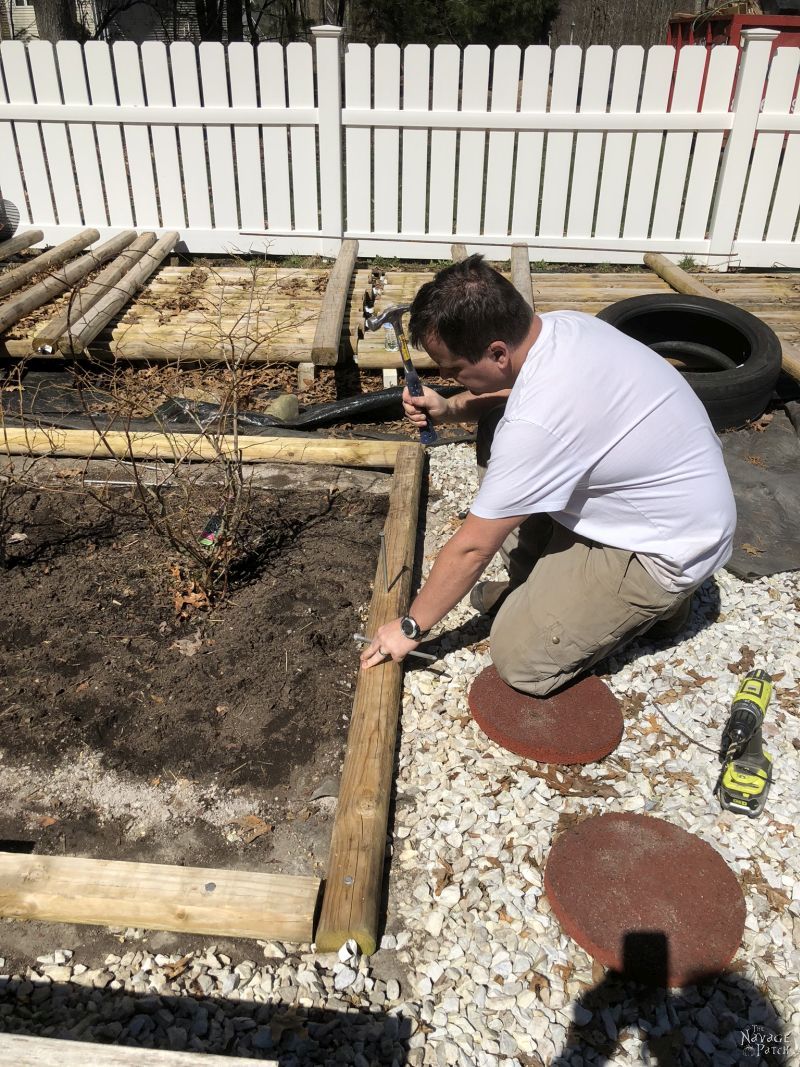 But once we got to the second tier, I realized that my small drill bit wasn’t long enough. It’s every man’s worst fear: the moment he discovers his drill bit isn’t long enough for the job. I hung my head in shame and told Handan to get dressed.

She’d need to change out of her pajamas so we could go to Home Depot where I could upgrade my tiny drill bit to an 18 inch monster that could fulfill all my drilling needs. It seems size does matter. Especially when there’s drilling to be done!

We got back home, and I twisted on my new bit. I was ready for some serious drilling. 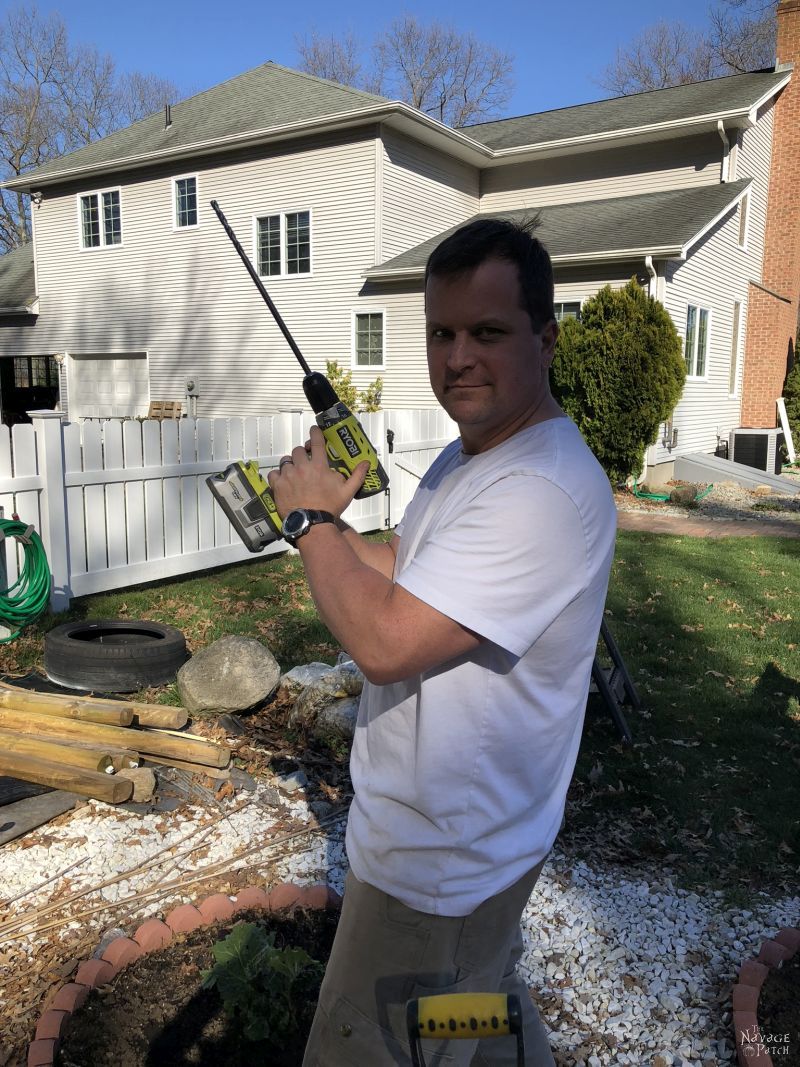 I drilled the logs and then pounded in the spikes. Even Handan got in on the pounding. 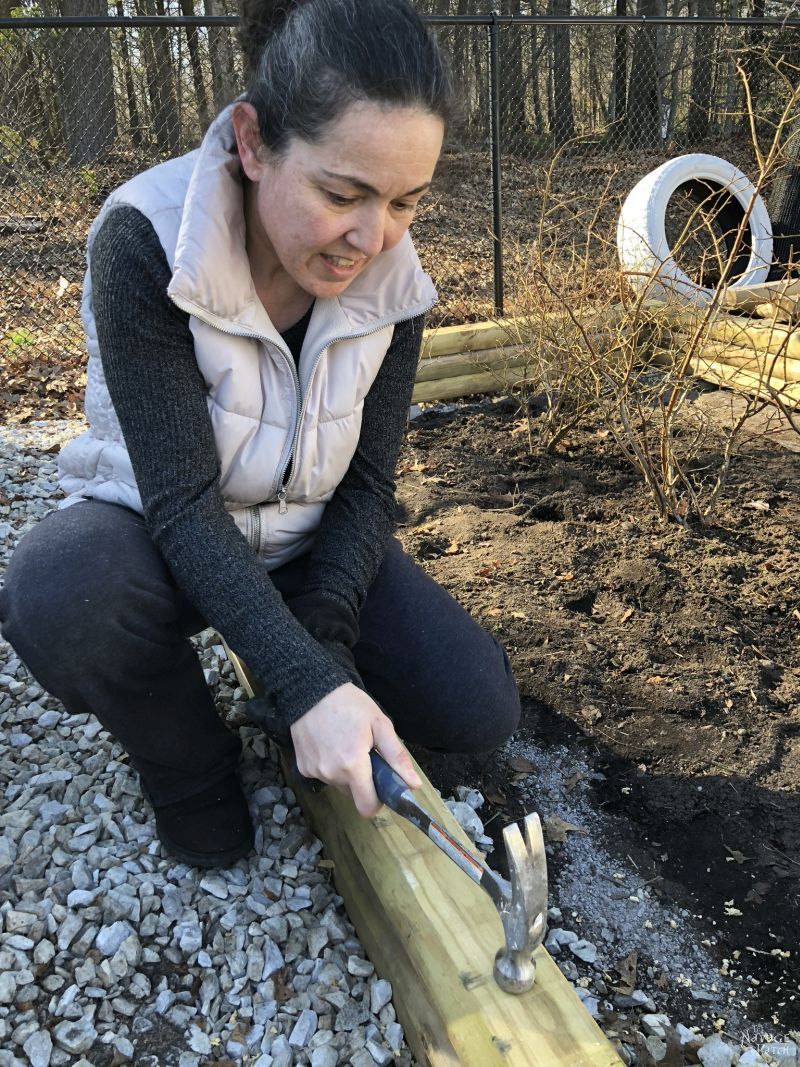 We laid three layers of logs, and then Handan filled back some stone. 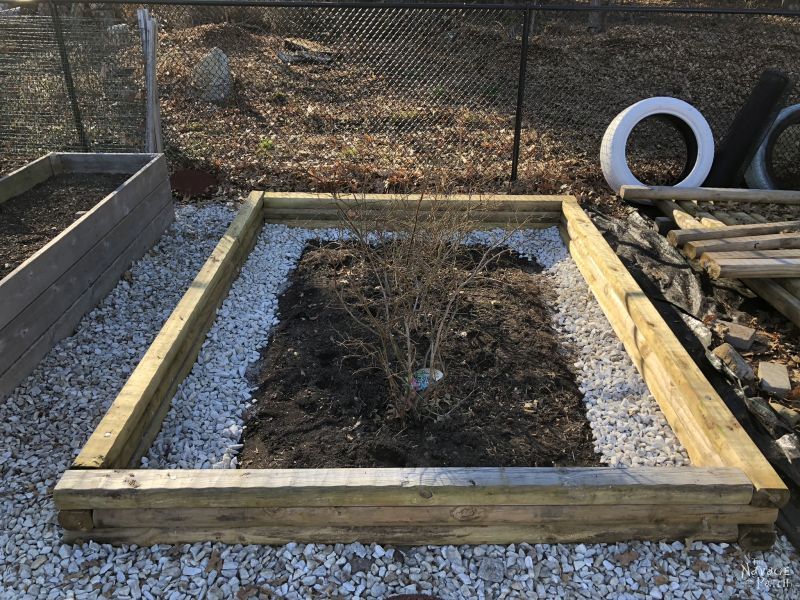 This week, I will build the rest: four corner posts from 4x4s and some 2x4s that will go around the top of the 4x4s. From that, we’ll hang bird netting. All this work, just to keep out the birds and the chipmunks! Last year was the first year that our entire crop wasn’t eaten. But it was such a pain in the butt to get into the old enclosure that most of the fruit just hung there, uneaten. Not this year, my friends. This year, I shall have blueberries or I will eat my shoes!

Yeah, yeah, I know I made a similar promise last year:

This year, I will eat blueberries or nations will crumble and burn at my feet.

And I did eat blueberries. I just could have eaten a lot more if I had easier access to the bushes!

So that was our first weekend outdoors. We were tired and sore come Sunday night, and there was only one thing that could fix that: steak, martinis and spiced rum. Our backs are still barking at us today, but we’ll be back in shape in no time and ready for more work!

We still have ton of work to do (include yard cleanup this week), but we’ll knock all of the items off our list, one by one, and we’ll be ready when summer arrives!

Stay tuned for the next installment of the Dining Room Makeover. I just finished building a Farmhouse Console Table, and I’ll be sharing that post with you guys in the next day or two.

Have you guys ventured outside yet this spring? How are things looking in your yard? What outdoor projects do you have planned this spring and summer? Let me know in the comments!