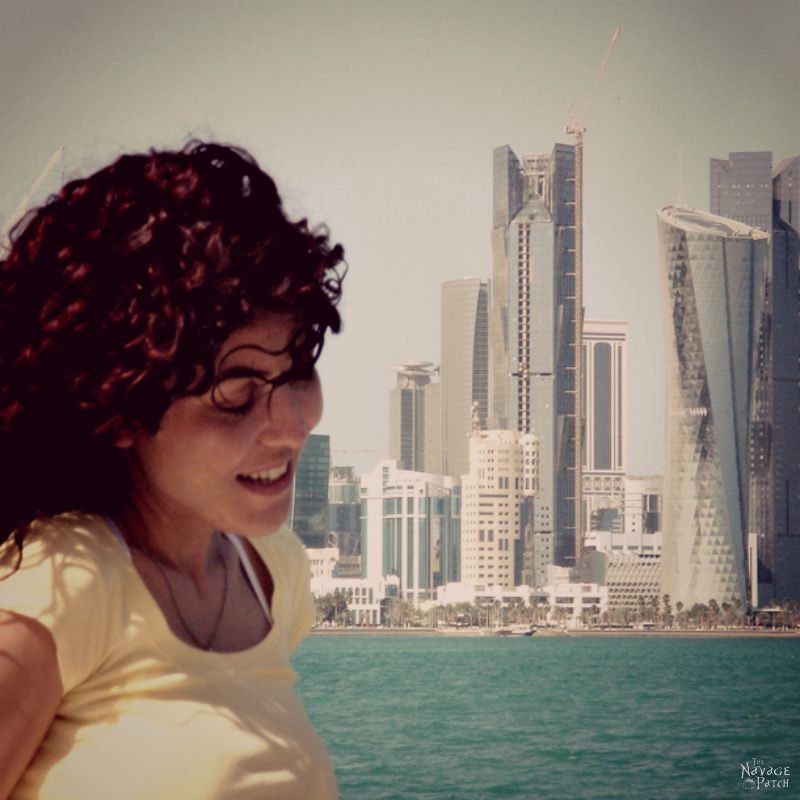 CONTINUED FROM>> About Us

12 hours later, I landed in Doha on a warm evening in March of 2010. The eyebrow-arching plan hatched three months prior was about to be realized. All I had to do was deplane, clear customs and meet my fiancée. If the customs agents thought it strange that an American guy was landing on their shores with two massive suitcases, a carry-on, and a backpack while traveling on a two month tourist visa, they gave no indication. I breezed through without question and exited the airport. There I stood, in the pick-up zone of an airport in a desert far across the world from my home. Alone.

No worries, though. Handan would be along any moment to pick me up. The minutes rolled by, and I occupied myself with trying to understand this foreign land and its strange inhabitants. Did you know that in the Middle East it is customary to light fires in trash receptacles? It harks back to a time when desert nomads would signal between tribes at night by burning fish oil in upturned camel skulls. 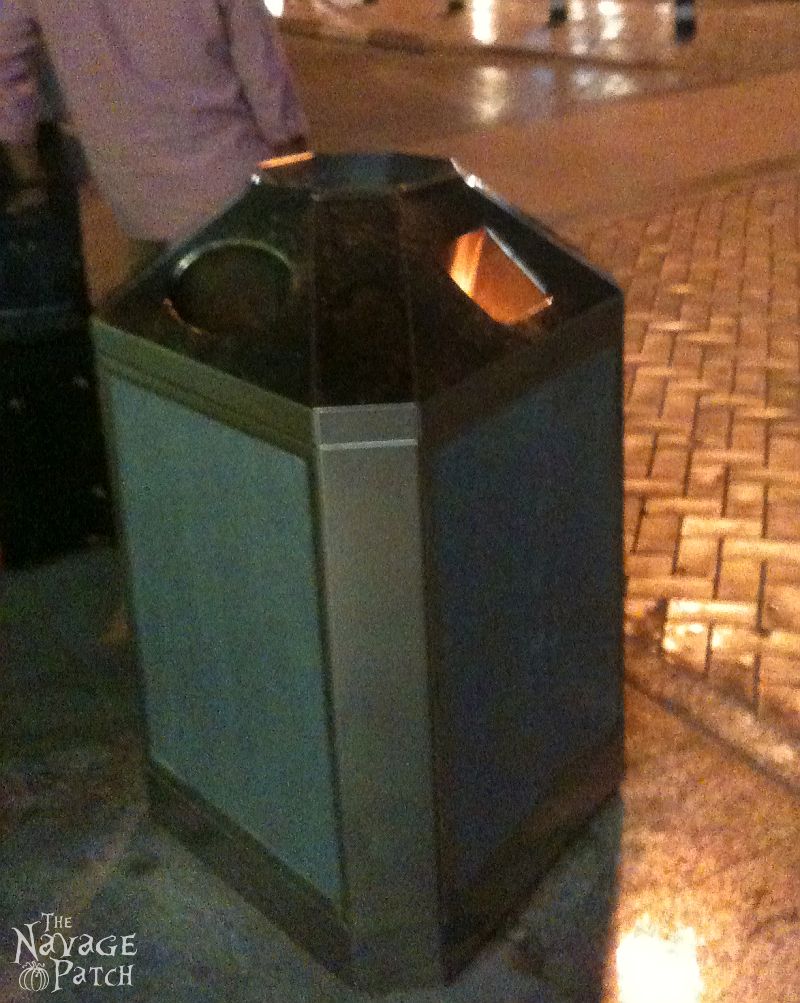 Nah, I’m just sh!tting you. This garbage can just started smoking, and then flames started shooting out of it. People took it in stride, by which I mean they totally ignored it.

Handan was now 30 minutes late, but I had no way of contacting her. My mobile phone seemed confounded by Qatar. After a time, I spotted a bespectacled fellow in a Kangol speaking American English into his mobile phone. 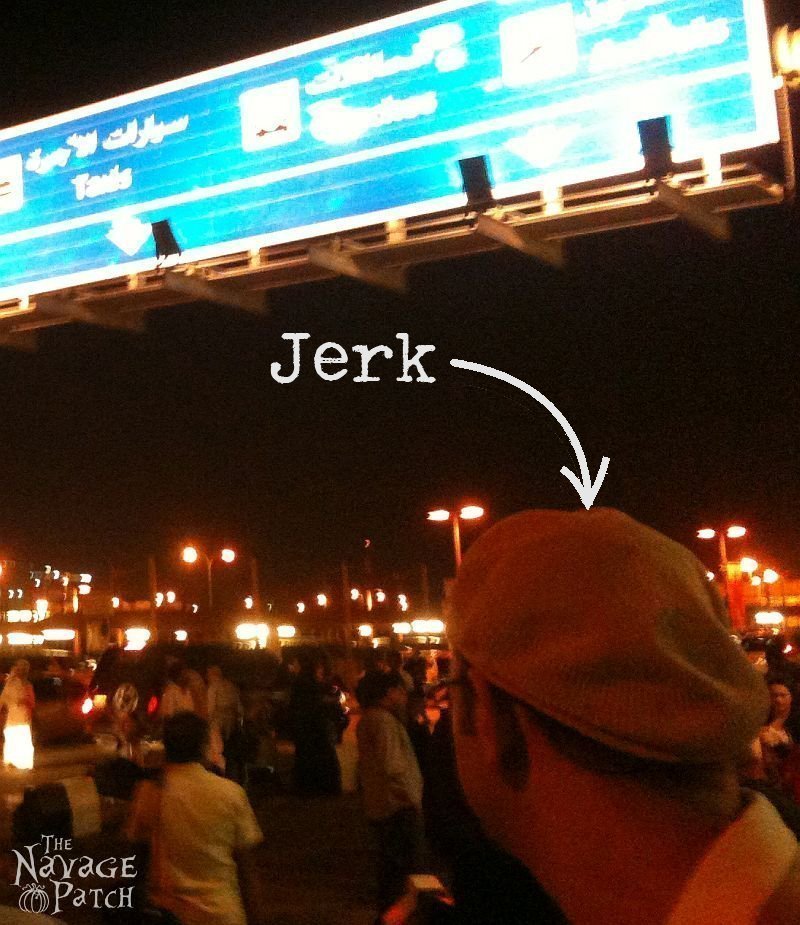 I waited until he finished his conversation, then introduced myself and struck up a conversation. He was there on business – had been there a few times before. After a reasonable amount of time, I told him my story and my plight. I kindly asked if I could borrow his phone to make a quick call to my fiancée to, you know, find out where she was and if she was actually coming!

Wow, really? I was getting a little nervous now, but not to worry. I’d figure out a way. After a time, I powered up my iPhone once more and turned on cellular coverage. I figured I’d just wait and see if it could grab a signal from somewhere. After two full minutes, my phone connected to QTel, the local network. Huzzah! I dialed my lovely bride-to-be (I hoped) and…nothing. No answer.

I pecked out a text message to Handan: “Hi. I’m at the airport. Where are you? Is everything ok? I love you!” Minutes passed.

An hour had passed now. I pulled out my phone and dialed her number again. This time there was an answer!

Followed immediately by a hangup.

My mind raced, questions and possibilities careening through my brain like a 16-year-old with a new drivers license and a Ferrari. Had something happened to her? Had she been in an accident? Did she really exist (I had plenty of Skype talks to prove that, but at that point my brain was hurling scenarios like Zeus hurls lightning bolts)? Did she change her mind? What time was the next flight back to the States? Would I have to sleep in the airport? Did I have enough space on my credit card to purchase a ticket? Could I get my old job back? I stood there at the pickup curb of the Doha International Airport, a stranger in a strange land, alone, confused and a little scared. I waited and watched. The desert night deepened.

An hour and a half after stepping out into the warm Doha night, a small red Toyota pulled pulled to the far curb, just across the taxi pickup lane. A woman with beautiful deep red curls stepped out, looked around, and locked eyes with mine. Handan had arrived.

A smile spread across my face and drove all the worry and fear off into the night. I lumbered across the road with my luggage and met Handan by the trunk. We hugged. Our first contact. But before a second had passed, she gently pushed me away.

“We can’t do that here. We’ll be in trouble if anyone sees and reports us.”

I had forgotten that we were now living under Sharia law. We were, in fact, breaking the law by living together. Because of this, I had bought us each wedding bands before leaving the States. Mine was already on. I gave Handan hers. As far as the casual observer could tell, we were married. Hopefully no one would ever have reason to dig deeper. [spoiler: they never did :)]

Here is what happened to Handan that night.

Handan was on her way to the airport to pick me up, but she was running just a little bit late (this was a common theme in her life before she married Mr. Punctuality. Mr. Punctuality can’t abide tardiness). When I called her the first time, she looked at her phone but didn’t answer since the number came up as unknown. In the Middle East, it is not uncommon for men to dial random numbers until they chance upon a woman, whereupon they attempt to engage her in conversation. You can imagine how well that usually goes over.

Shortly thereafter, she received my text and read it, still on her way to the airport. Texting or talking on a phone while driving is illegal in Qatar, and of course, Handan’s infraction was seen by two of Doha’s finest. Now, a traffic stop in Doha is a lot of things to a lot of people. If they are Qatari, the stop would likely be quick and result in no fine. If they are Qatari royalty or wealthy…what am I saying? They are immune, and would never be pulled over! I mean it. They can basically do whatever they want. If they are women, and Western, and attractive, well, then the stop could take a VERY long time. Procedures to check, documents to inspect, that sort of thing. So Handan found herself at the mercy of two big-eyed lawmen looking in all the wrong places. It was sometime during this stop, as Handan begged and pleaded to be let go (so she could pick up “her dad” at the airport), that I placed my second phone call. Since the officers were standing just outside her car, she grabbed the phone, hit “answer” then immediately hit “end.” She couldn’t risk them asking questions about who it was on the line. After what felt like an eternity to her, the officers relented, having filled their eyes with Western delights, and let her go. She continued to the airport and pulled up to the curb, only 90 minutes late.