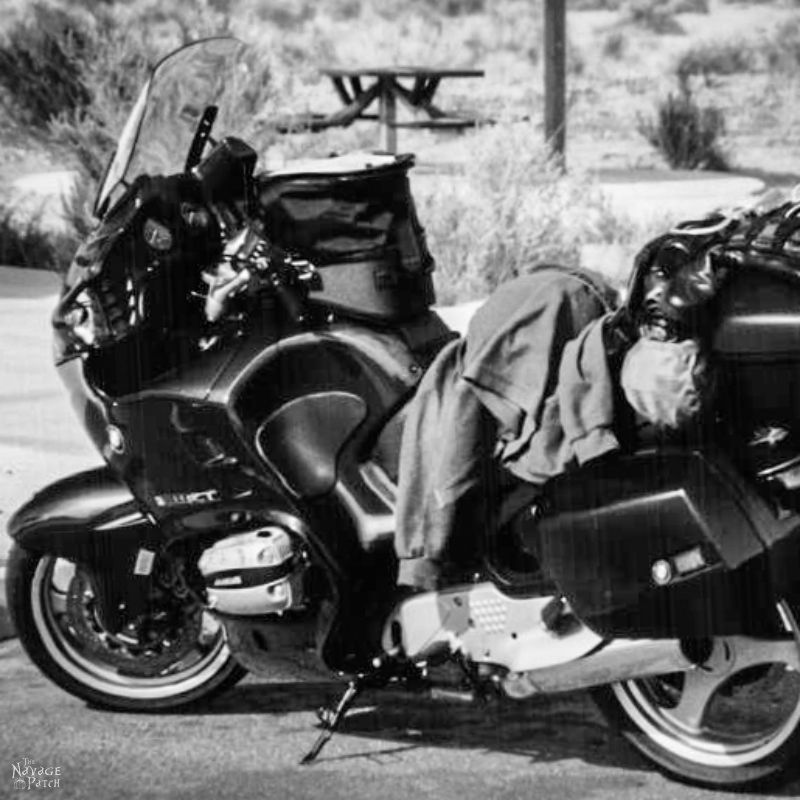 I left Grand Junction feeling refreshed and looking forward to the day ahead. I was excited because I would enjoy the company of friends and family that day after three days alone with my thoughts. I was also champing at the bit to take my bike up into the Rocky Mountains. It would be my first time riding on real mountain roads, and I couldn’t wait to get started. Of all the great feelings, adrenaline spikes and endorphin releases delivered when riding a motorcycle, none compares to the thrill of leaning the bike into a tight turn and getting so low to the ground that the inside footpeg drags along the asphalt while the brain balances a frisson of fear with the calm logic of friction.

The morning was sunny and warm. I rode southeast on Rt 50 and then picked up a smaller road into the mountains. The light jacket I wore would soon become unnecessary as the temperature climbed with the sun. It was a glorious day.

The mountain roads were everything I hoped they would be, and by the time I reached Aspen, I was grinning from ear to ear. I consulted my map to find the way to my destination, The Little Nell Hotel. If you are traveling to Aspen, and if you happen to have money flying out of your wazoo, then you should certainly stay at The Little Nell. You’ve no doubt heard of ski in/ski out hotels that offer the convenience of slopeside accommodations, but The Little Nell is so close the mountain, that I’m pretty sure you can order a chairlift to come right into your window and pluck you out of bed. Location like this doesn’t come cheap – a room will run you between $1000-$3000 PER NIGHT during the winter. Like I said, if you have the unfortunate condition of $100 bills shooting out of your bum, you can put them to good use at The Little Nell.

I parked my bike across the street and slithered in to the resort, sweaty and greasy and leaving a trail of stink behind me. I felt like an oily rag on the hood of a Rolls Royce. But hey, I can fit in most anywhere, so I told the man looking down his nose at me to attend to my BMW across the street. I told him that I’d like it washed in filtered rainwater with lavender-scented soap and an organic sea sponge, dried with a brushed goatskin chamois and then lightly creamed and buffed with a baby’s diaper. I tossed him a shilling and demanded a dry martini be served to me on the lanai.

Just kidding. I kept my head down and scooched through the lobby before I could offend the gentry with my smell.

I walked out onto the stone veranda and found Margo, Chuck and baby Aidan. It had been about a year since I’d seen my sister and brother-in-law, and it was my first time meeting my nephew. He was a handsome baby, clearly taking after his uncle.

I had some refreshment, caught up with everyone and then started planning my departure. I consulted my map to find the most interesting route to Winter Park. 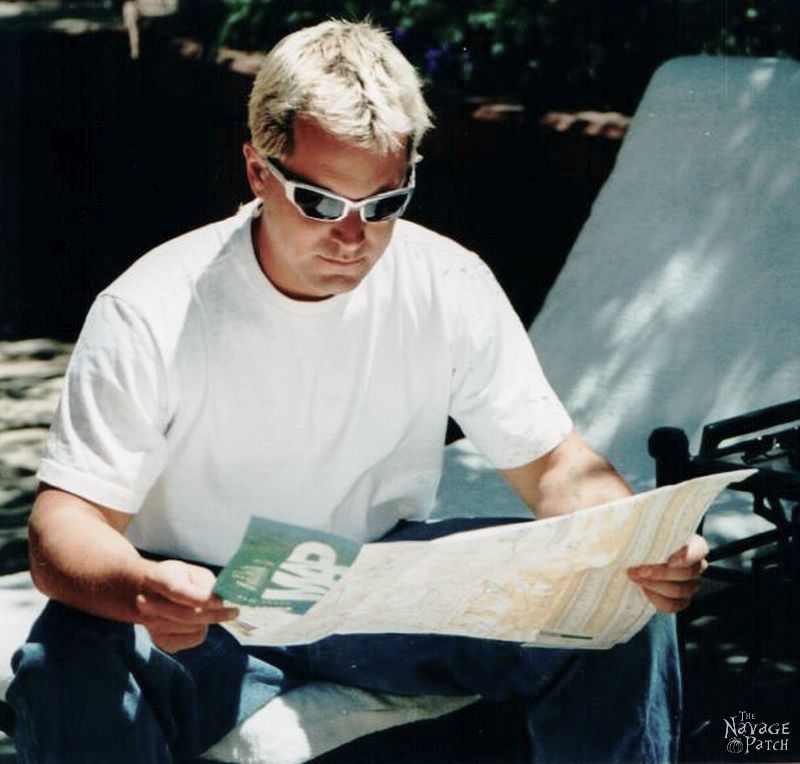 Yes, that’s a real old-fashioned map! I count myself lucky to have grown up in the days before GPS. My father taught me to navigate with a map when I was 16, and it’s a skill I intend to teach to Barish as well. If the sh!t ever hits the fan, at least he’ll be able to find his way home, wherever he may be.

I said my goodbyes, slunk past the reception desk, darted across the street and mounted my bike. It was mid-afternoon, and I still had some great riding to do, including two crossing of the Great Continental Divide. I rode out of Aspen, picked up Rt 82 heading east, and then the real fun began!

The roads up to and over Independence Pass were even more twisty, narrow and fun than the roads into Aspen. I could ride those mountains every day and never tire of the experience. As I neared Independence Pass, the air got noticeably colder, but I didn’t stop to layer up – I was having too much fun! When I got to the top of the pass, I pulled over to take a photo. I’m a sucker for continental divides, and none compares to The Great Divide. 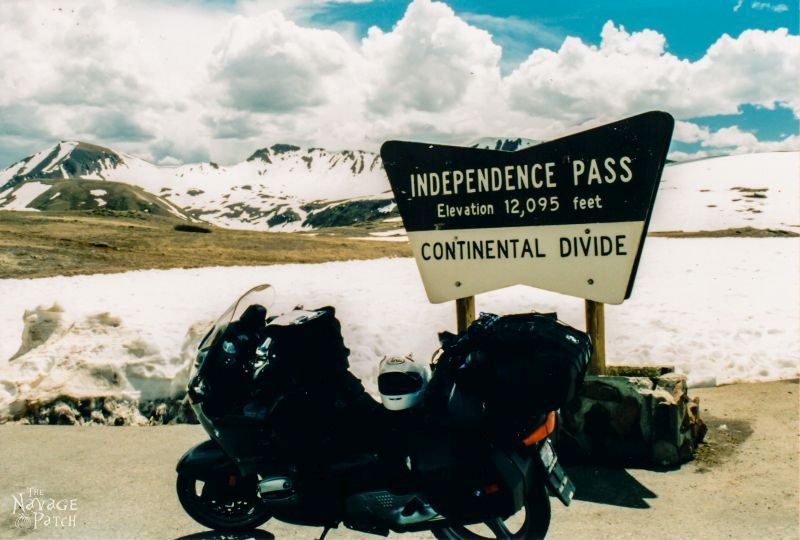 I grabbed two water bottles from my bags and found what I thought was the exact geographic divide. I straddled the Divide, facing north, my left leg to the west and my right leg to the east. I opened the bottles, held out my arms and poured a few measures of water from each bottle. The water I poured from my left hand (assuming no evaporation) would eventually make its way into the Pacific Ocean. The water I poured from my right hand would drain into the Gulf of Mexico and eventually work its way into the Atlantic Ocean. I love stuff like this!

It was pretty chilly up there at 12,100 feet, so I took the opportunity to layer up for the backside of the mountains. Since it was pushing into late afternoon, I’d be riding in the shade on the eastern slopes.

The eastern side of the Divide was wild, with many more switchbacks than the western side. Going downhill around those hairpin turns kicked up my adrenaline a notch or two!

As I rode into a valley between the Elk Range (where Aspen lies) and the Mosquito Range, I saw some nasty-looking clouds hanging over the mountains in front of me. I’d had great weather until then, so it wasn’t unreasonable to expect a little rain. I pulled over to don my rain suit. 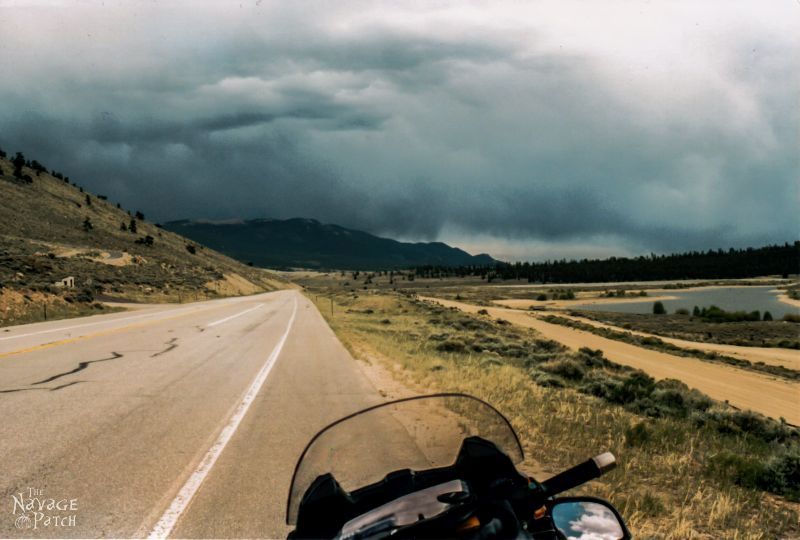 My rain suit was a one-piece bright yellow thing that I’d never worn before. I bought it just for the trip. I was actually kind of excited to try it out. I squeezed into it (maybe I should have gotten a bigger size) and headed into the gloom.

And wouldn’t you know it, I hit an intersection and turned left, heading north before I got to those ominous clouds. The gloom lifted and the sun shone through. I rode on and before long, I realized that I was steaming like a Maine lobster in that one-piece portable sauna. I pulled over again and peeled it off, as clouds of steam billowed into the dry mountain air. Cooler now, I resumed my northward push, heading towards Leadville.

At 10,152 feet above sea level, Leadville, Colorado is the highest incorporated city in America. It is a former silver boom town and its population was once second only to Denver. Its fortunes waned as the silver mines played out, and now Leadville is a small, historic town of only a few thousand hardy souls. I thought about its violent past as I drove through its streets. During the gold rush and westward expansion of The United States, Leadville was known as the most lawless city in the great lawless west! What stories the land could tell…

After Leadville, I rode a while and passed through Breckenridge before picking up Interstate 70 at Frisco. After a short ride on the interstate, I picked up Rt 40 at Empire and headed back up the switchbacks. This was a road I had traveled many times before. I was heading towards Fraser, a small town that lies just past the ski resort, Winter Park/Mary Jane. I lived in Fraser and worked in Winter Park the year after I graduated college during the winter of 1994/1995. I would soon be reunited with some old friends who were still living there.

I crossed back over the Great Continental Divide at Berthoud Pass, but it was undergoing some construction which marred its natural beauty. I powered through without stopping, as Winter Park was not far from the Divide.

As I rode through the town of Winter Park towards Fraser, my mind flooded with memories. I never expected to see this place again, at least not so soon after leaving (six years isn’t exactly soon, but I really didn’t think I’d ever make it back there). Writing this has put me in a mind to find some photos of that era, so here we go down memory lane.

There was a lot of this: 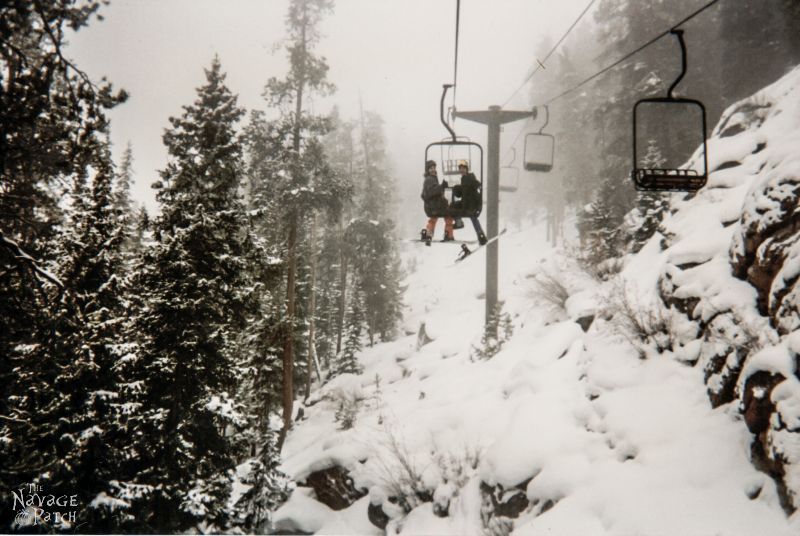 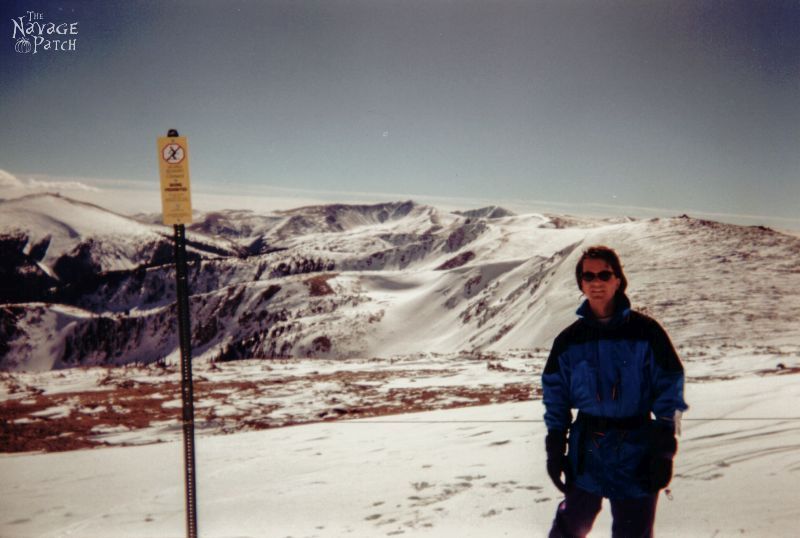 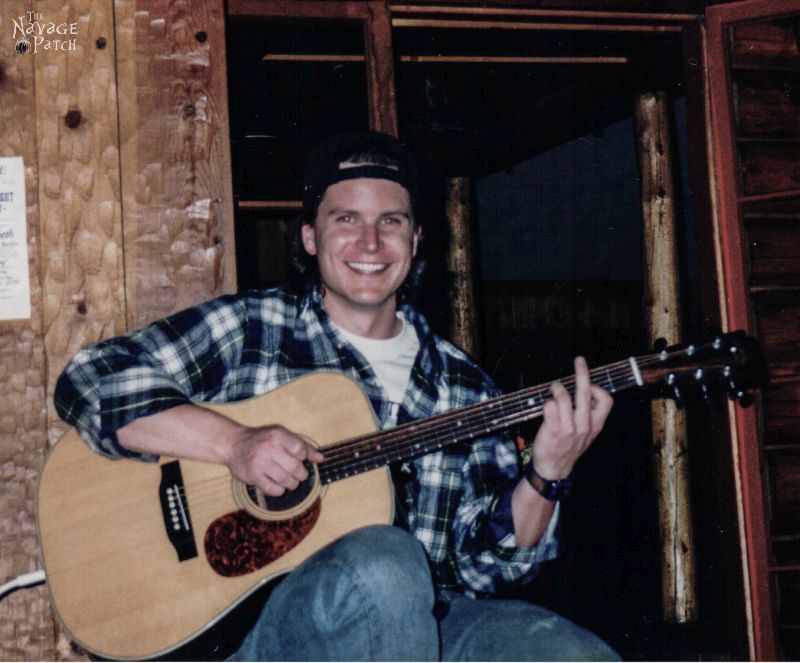 A little bit of this: 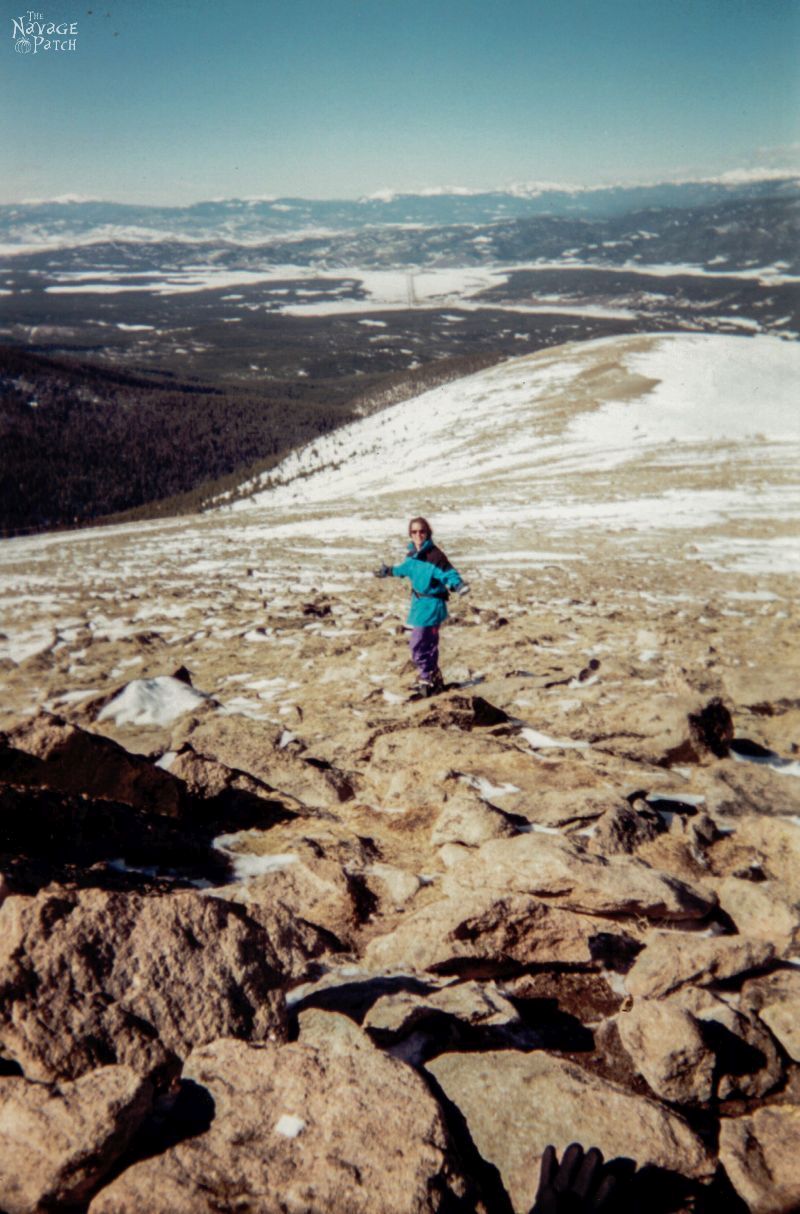 One night of this: 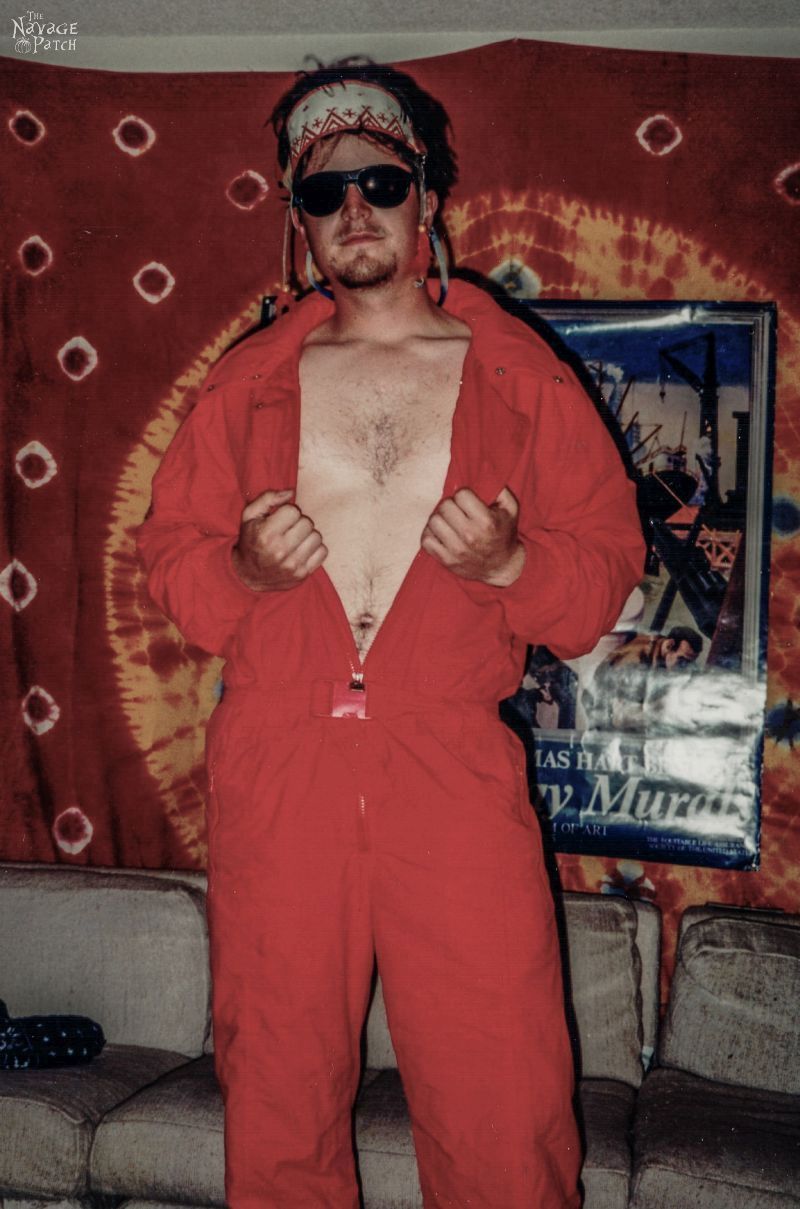 And a few days of this: 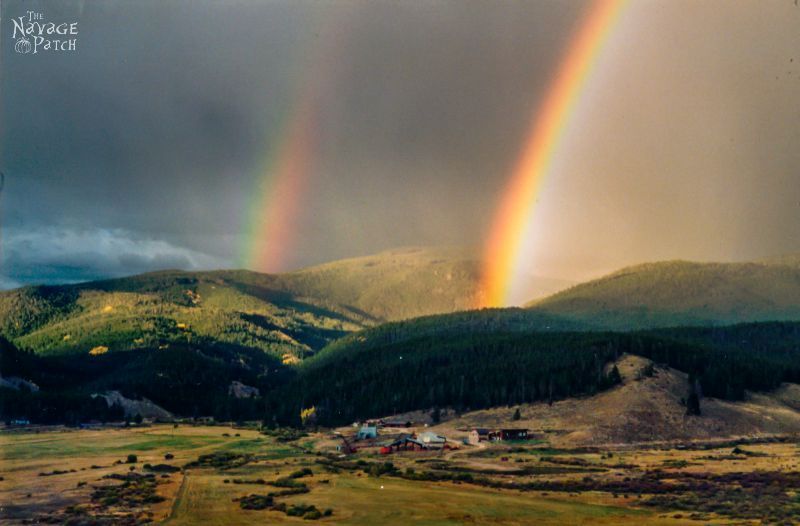 I rode past Fraser and hooked a right onto the back road that led to Devil’s Thumb Ranch in Tabernash. Don’t bother Googling it now. I just did, and I didn’t recognize the place. In 1994/1995, when I lived there, Devil’s Thumb Ranch was a little gem, owned by a small group of dedicated folks who didn’t have a clue what they were doing. It was awesome. I spent my weekend nights volunteering at the tiny bar attached to the restaurant, because none of the staff knew how to mix a drink! When I visited in 2001, I think ownership may have transferred. But whatever passes as the Devil’s Thumb Ranch, Resort and Spa nowadays is a lavish paradise for the monied set. Either they tore down every building and started over, or they built it on a new spot. It isn’t the Devil’s Thumb Ranch I remember and love. It is just another fancy resort designed solely to separate you from your money. I suppose I won’t be going back there again.

I arrived at the Ranch that I remembered to visit my friends, Jason and Emily, who both lived and worked there together. It was late afternoon, and I was tired from my ride. The next day was a perfect Colorado mountain day, and I spent it relaxing at the ranch. 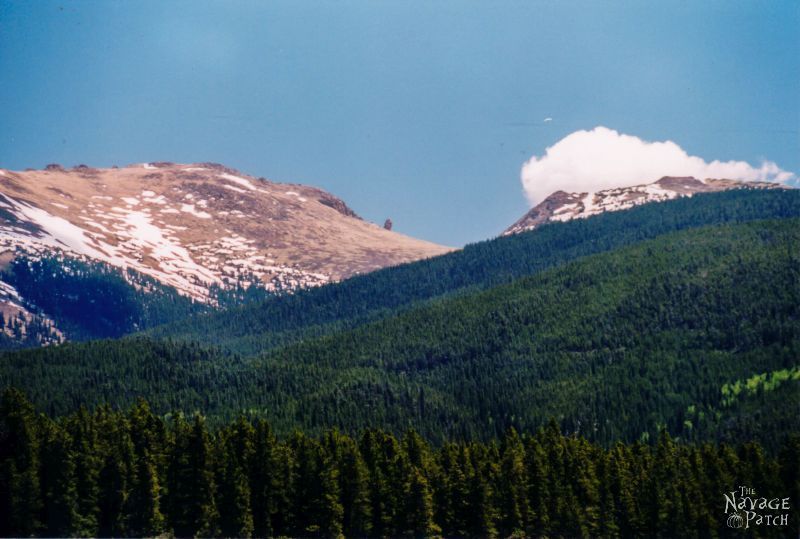 That’s Devil’s Thumb, sticking out of the side of that mountain. 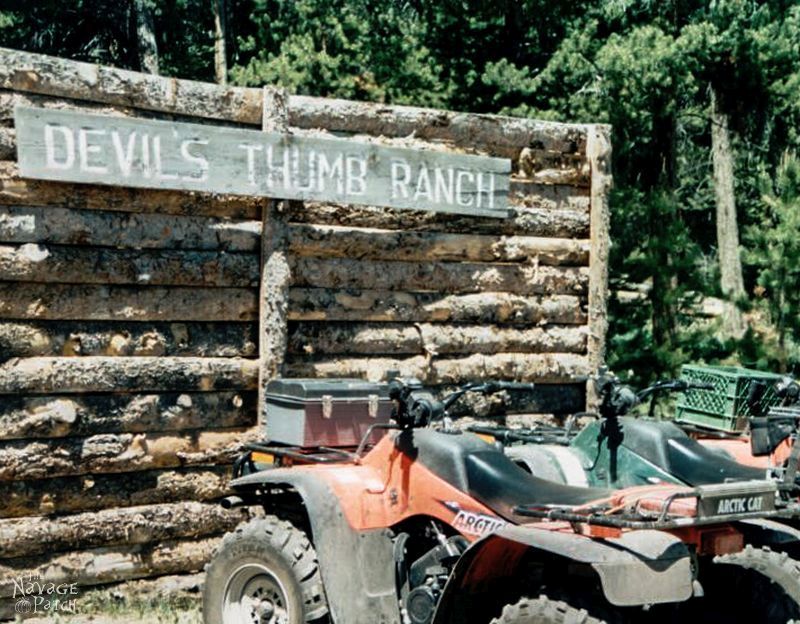 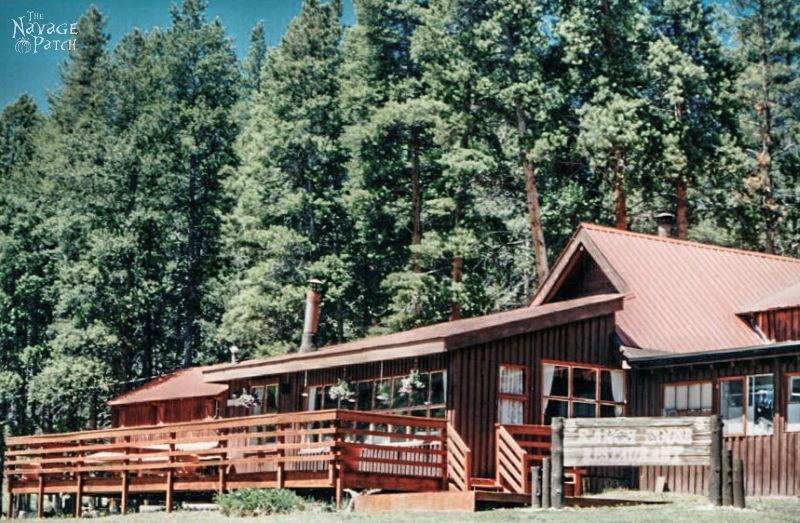 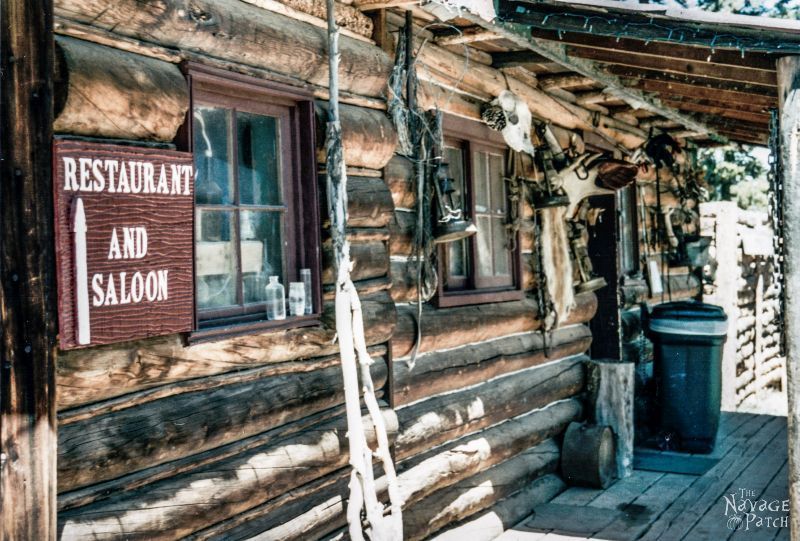 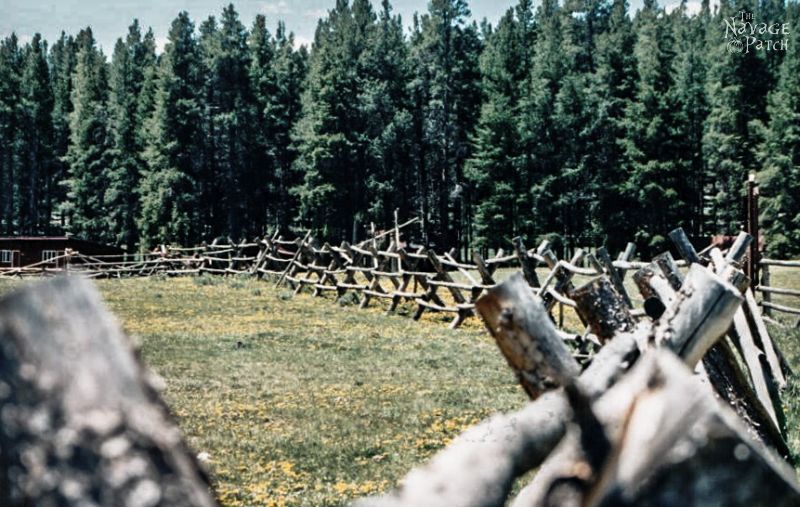 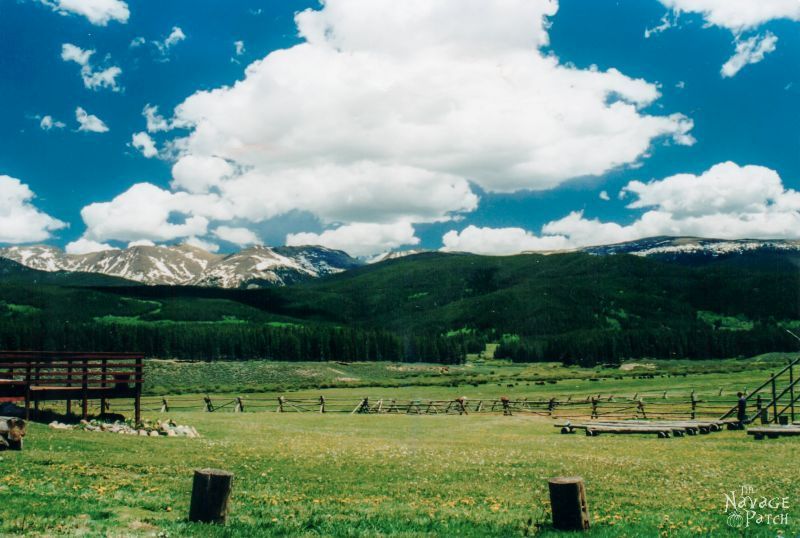 That night, I consulted my map again. I was only about one third of my way across America, and it looked like most of the interesting stuff was behind me. I looked at the expanse of plains still to come. That would be some boring riding! I checked the weather forecast, and it looked like it was going to be brutally hot, to boot. Long, straight roads and 100 degree temps. I reconsidered my plan to take smaller roads across the country. I decided that I would hop on Interstate 70 the next morning to cross the front range, eastern Colorado and Kansas, then I’d reconsider my options. I turned in for the night and slept easy, unaware of what lay in store for me the next day. 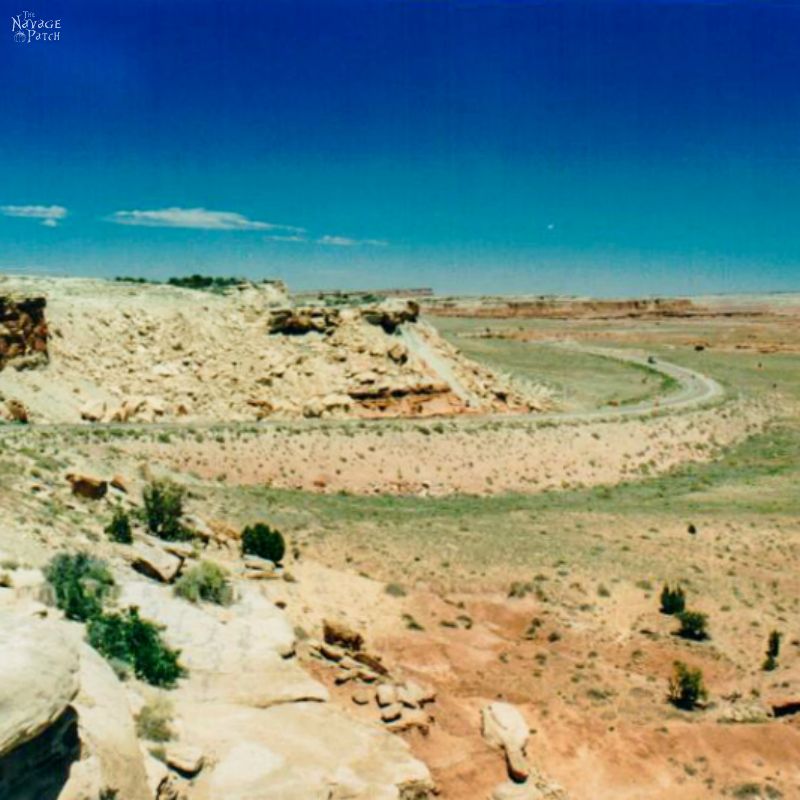