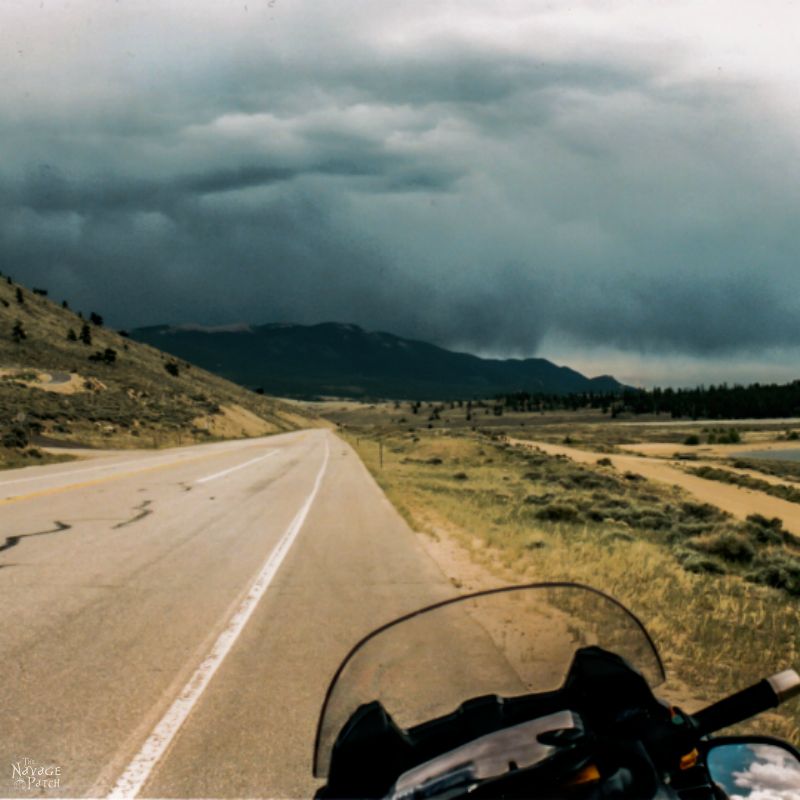 I only spent one full day off the bike, but the road was calling me back. There is a rhythm to the road, and I was eager to pick up the beat. I packed up my gear and said goodbye to my friends. As I rode the gravel drive out of Devil’s Thumb, I looked around at those beautiful mountains and thought that it would be a long time before I saw them again. I put the Thumb to my back and motored down the road. I picked up Rt 40 in Fraser, rode back through Winter Park, up and over Berthoud Pass and back down the mountain where I picked up I-70 east again in Empire. From Empire, it was a 27 mile trip down the mountain to the eastern edge of the Rocky Mountain foothills on the outskirts of Denver. Those 27 miles were the last good riding I had until the rolling hills of central Pennsylvania, some 1500 miles to the east. But I didn’t know that yet, so I enjoyed the downhill twisty turns of the Rocky Mountain front range. It was morning and already a scorcher. The farther east I push and the lower down the mountain I got, the higher the temperature soared. Although I preferred to ride highways with at least a light jacket on, those temps demanded shirt sleeves, so I pulled over once I got through the Denver metropolitan area and stowed my jacket.

About 30 miles past Aurora, Colorado, Interstate 70 jogs southeast for about 45 miles before turning east again. The town of Limon, Colorado lies just past the eastward turn. It is the last town heading east on I-70 that has any semblance of a hill or any other interesting geological feature until Kansas City, Kansas, over 500 miles away. Just 10 miles to the east of Limon begin the Great Plains, the massive swath of prairie, steppe and grassland that sweeps down from Canada through the middle of America to the Mexican border. Much of the American Great Plain has another familiar name: Tornado Alley.

I remembered from studying my map that after Limon, the riding would get real monotonous real fast, so I decided to pull off for some refreshment. As was my habit back in those days, I pulled into my preferred eatery, McDonald’s. If I were to take another trip like this, I would spend more time eating in small diners and talking to the locals. But I was 28 and always in a hurry, so I chose the easy convenience of the Golden Arches. I pulled into the parking lot under clear skies and dead-still air. I secured my helmet to my bike and stretched. There were a few tables outside, and I briefly considered eating there, but I thought that a little time in the cool would do me some good. I walked back to my bike and grabbed the paperback science fiction novel I was reading and headed into the restaurant. Since it was such a hot day, I decided to take a little more time than usual eating my Quarter Pounder with Cheese while the air conditioning evaporated my sweat and cooled my skin. I was out of the mountains, and I had a long stretch of, well, nothing ahead of me, so I might as well start slow, relax and read a book for a while.

I spent about 30 minutes eating and reading. When I felt rested and cooled, I disposed of my trash, pushed open the door (like opening an oven) and walked back to my bike. But there was something different.

Something with the light.

I was facing east and the sky ahead was blue and clear, if a little hazy. What was different?

I looked up, and my stomach tightened.

I felt like I was in the movie, Independence Day. Have you seen it? There is a scene where an alien ship hovers over Manhattan casting a shadow over half the city. 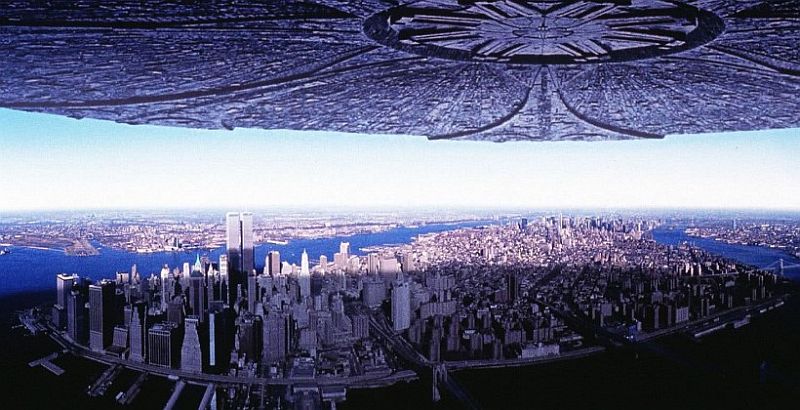 This is what the sky looked like directly over my head, and I was standing under the leading edge. It scared me.

I hurried back to my bike, jammed my helmet on my head and roared out of the parking lot. I wanted no part of that ominous thing overhead. I craned my neck to take another look. The cloud arced away to my left and to my right. It seemed to stretch from horizon to horizon, and I was in the dead center of the leading edge, the farthest point east in a great, black disk that had been thrust down over the land. There is a time to stay and fight and a time to run like a gutless chicken. This was the latter. I twisted the throttle and got back on the freeway. I accelerated to 80 miles per hour in the hopes of outrunning it. After ten minutes, I looked up.

It was still there, the leading edge directly over my head.

I twisted the throttle some more and increased my speed to 100 miles per hour. The road stretched out ahead of me, endless and hot and shimmering in the distance from the oppressive heat.

There’s a curious thing about riding in extreme heat: the faster you go, the hotter you get. This happens when temperatures climb into the upper 90s and higher. It’s like riding in a blast furnace. Just like a wind chill would lower your body temperature faster, riding into a scorching 100 degree “wind” makes you feel like a meatloaf in a convection oven. And there I was, charging through that thick, super-heated air trying to outrun a cloud that looked like a UFO.

I rode on and on, never letting the speedometer drop below 100 miles per hour. On a bike as loaded down as mine, this is a highly discouraged practice. When riding with saddlebags and loaded with gear, speeds should be kept under 75 (the owner’s manual says even slower). But I was scared of that thing in the sky that was following me. I couldn’t lose it, no matter how fast I went!

Okay, look, I’m not some hayseed who thought it was the apocalypse or an actual UFO. I knew exactly what it was, and I knew exactly what it meant. Storm fronts like that mean a very high chance of tornadoes. I was riding right in the danger zone, so I was pushing my bike to its limit to try to get out from under that zone.

After some time, I checked my left side mirror. What the hell was that?

I slowed the bike to 80 miles per hour so I could twist around in my saddle to have a look with my own eyes.

The thing I’d been dreading.

Dropping down from the cloud.

I spun back around and twisted the throttle all the way. I laid my torso against the bike to lower my wind resistance.

(Your bike is not designed for this)

I glanced in the mirror again.

The funnel cloud reached lower, the dirty finger of a mischievous giant looking to stir up some trouble. I could see the rotation where it met the cloud layer above.

I didn’t think I was in danger from the funnel cloud. It looked to be at least a mile back. But where there is one, there could be more. I don’t know if that particular funnel ever reached the ground and became a tornado. I didn’t have the luxury of studying it. I laid my chest and chin on the bag strapped to my gas tank and rode with all of my concentration.

The miles wore on, and my fuel ran low.

Seventy five miles past Limon, I approached the town of Burlington, Colorado, only a few miles from the Kansas border. An overpass crossed the highway at the exit, and I spotted two state troopers standing on that overpass, facing west and staring through binoculars. I needed to refuel, so pulled off and turned left onto the overpass. I rode past the troopers, fueled up in town and then rode back to see them still standing there. I pulled over.

“Excuse me, officers. What do you see? I’ve been running from that damn cloud for the past hour!”

They lowered their binoculars and turned to me.

“We have reports of a tornado touchdown in Limon.” Said one of the troopers.

“Jesus, I just ate lunch there…” I said.

The other glanced at my bike. “There’ll probably be more. Be careful out there.” She said.

“Yes, ma’am. Thank you, officers.” I said and pulled away.

I got back on the freeway and resumed running away from the big, bad, tornado-spewing storm.

Minutes later, I crossed into Kansas. Though storms take no notice of geopolitical boundaries, this one felt less threatening once I crossed into the Sunflower State. I kept my speed at 100 miles per hour, though, until I was certain I was out of danger.

The miles ticked past, and I kept a wary eye on the sky above. Either I was finally putting distance between it and me, or the storm system was weakening and petering out. Either way, the clouds above were lighter and less menacing. I breathed a little easier and backed off the throttle a bit. Since I couldn’t be sure of what the weather would do, I maintained 80 miles per hour for the rest of that afternoon.

A few hundred miles after I began my run from the storm, I was finally in the clear. It was late afternoon, and the sun was breaking through the clouds in the west. The temperature had dropped into the 80s, and it was looking like a fine evening as I exited the highway to find lodging in Hays, Kansas.

It had been a stressful day, and I was desperate for a shower and a beer. I checked into a Days Inn, unpacked my bike and cleaned myself up. I went outside to find a perfect evening settling in. Shafts of golden sunlight bathed the town in the ethereal calm that only comes before warm summer nights. I closed my eyes and breathed in the waning day. That night, I wanted to dine in my room, so I saddled up and drove down the road to the Dillons supermarket. I bought a load of junk food and a six pack of beer, loaded it in my saddlebags and rode back to my room. I turned on the TV, opened some chips and cracked open a beer. I found a weather channel. It turned out there was a tornado outbreak all across eastern Colorado that afternoon, so the funnel cloud I saw in my mirror was not the only one that day. What a ride. I laid on the bed and sipped my beer.

I was asleep before it finished. 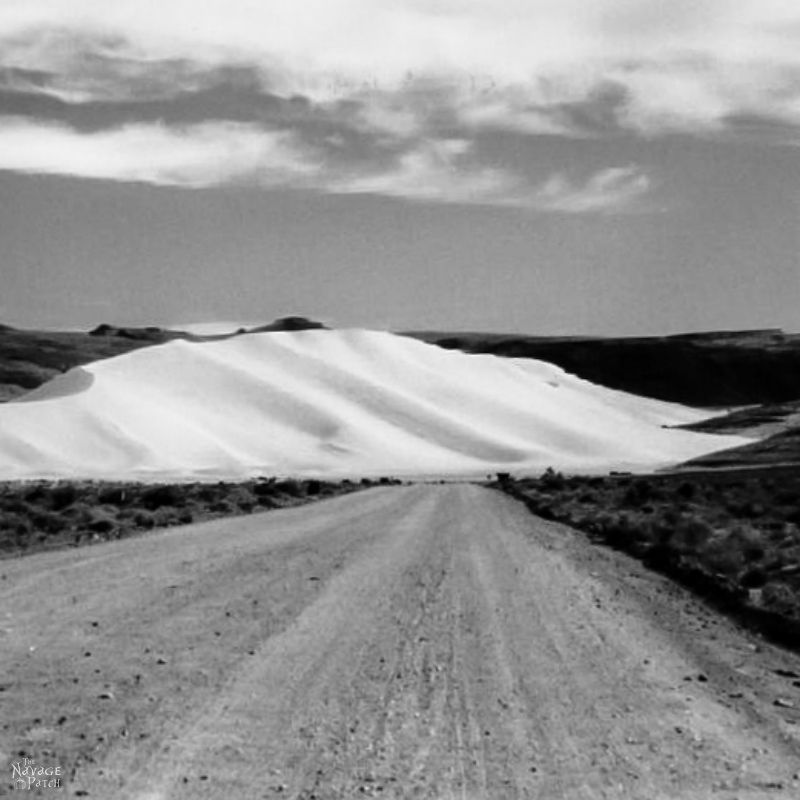