A frozen drain pipe flooded our basement and led to an emergency DIY repair as the sun set on a sub-zero winter’s day. Oh, the boundless joy of being a New England homeowner in winter!

They don’t teach what it means to be a homeowner in school. Perhaps they should.

I went down to the basement yesterday morning and turned right at the foot of the stairs to go to the storage room. I had a small box in my hand that needed to be placed inside a bigger box that was stored there. Since I was just down there to put a small box in a big box, I didn’t turn on the lights. There was enough light coming from a small bulb near the oil tank for me to see, and I was familiar with the way. I placed the box where it belonged and mentally patted myself on the back. I normally don’t put things back like that – a fact that has infuriated Handan to no end over the years. But yesterday, I did. I’ve been trying to be a better, more organized person lately. It not only helps me when I forget things (an unwelcome side-effect of middle age), but it makes my wife happy. And when Handan is happy, the universe shines.

As I left the storage room and started back for the stairs, I noticed the glint of a footprint on the floor, reflecting back light from the small bulb over the oil tank. Not dirt, then; dirt doesn’t reflect. Water. But I hadn’t been outside in the snow, so I couldn’t have tracked it down there. That meant one thing: flood. But it hadn’t rained – in fact, it was 0 degrees outside. No water could have come in from the outside. I looked down at the floor.

I ran and flicked on the lights so I could survey the damage and pinpoint the cause.

There! By the furnace.

Water poured from the humidifier attachment and from the condensation pump. It didn’t take long to figure out why. The temperatures had been hovering near zero for the last few days, so the discharge line that runs under the deck must have frozen. The old line came out of the house and ran almost straight down into the ground. It never froze, despite stretches of sub-zero temps. But when we had our deck rebuilt this summer, we asked our contractor, Rich, not only to extend that line all the way under the deck, but also the discharge line from our water softener. Each day, the softener cycles and discharges several gallons of water. Our old discharge pipe had broken, and the water used to flood out each day. In the winter, it caused our patio bricks to heave up, and in the summer it kept things wet. So when Rich built the deck, we asked him to extend those pipes to drain farther away from the house and the patio.

Staring down at the pond in my basement and the overflowing discharge pump, I began to see the error of my ways. I ran and grabbed a stepladder so I could turn off the water valve feeding the humidifier. With the bleeding staunched, I found my wet/dry vac, pulled off the air filter and started sucking up the floodwaters.

This was bad. The house was dry even with that stupid humidifier. I couldn’t imagine how bad it would get without it.

Before we closed on this house, I did a walkthrough with a home inspector. I remember when we were looking at the furnace, he pointed out the humidifier attachment and told me what a bad idea they were, because they can leave moisture in the ducts. The moisture promotes the rampant growth of mold spores, which are then blown to the four corners of the house, infecting all who breathe the air and leading to all manner of maladies including (but not limited to) Zombification, Vampirism, Crusty Butt Syndrome, and The Black Snot.

I was young and naive in matters of the home, so I nodded my head, narrowed my eyes and said, “Mmmmmm,” in a knowing and conspiratorial manner.

That winter, I wisely left the humidifier out of the HVAC loop. I wouldn’t see my family turned to black-snot-encrusted zombies!

That winter, the relative humidity in our house fell to 11% as measured by the hygrometer I keep next to the kitchen sink.

For reference, the Sahara Desert has an average relative humidity of 25%.

Our hardwood floorboards shrank, and great gaps appeared, revealing the ugly sub-floor below. Our noses dried out and [censored – you don’t want to know]. Nosebleeds became commonplace. I think I once saw a tribe of Bedouin walking their camels through our living room searching for watering holes, but my eyes were dried and crusty, so I can’t be sure.

Yep, it sure was dry that winter. Anyway, I learned my lesson. Figuring the home inspector must be a shill for Pond’s or Cetaphil or Oil of Olay, I turned on the humidifier the next year, and we all breathed easier.

So as I hoovered up the mini Great Lake on my basement floor, I considered my options.

I discarded option 1 immediately. The thought of paying someone to come out to diagnose and fix a problem I already understood on a Holiday weekend was abhorrent to me. I wouldn’t stand for it. Option 2. Hehehehe…they’ll never know! Except they would, eventually. And then Handan would kill me.  Option 3 was appealing, and I decided to run with it until Handan shot me down for not thinking it through. Those whole-house humidifiers are big, ugly and noisy. Option 4 became the front-runner, and I intended to do the job myself. Only I was going to do it the next day with Barish’s help.

Handan was having none of it. She said that I couldn’t fit under the deck. She said it had to be her that did the job.

And she said she was going to do it right then, with the sun about to set.

It was 0 degrees out and the wind was gusting.

Trying to talk her out of it would have been futile.

We put on our warmest layers, and I gathered supplies: pipe insulation, scissors, tape, hair dryer, rope and an extension cord.

The plan was for her to worm her way under the deck, carrying only the extension cord and one end of a large loop of rope. Once she reached the house, I’d tied the rest of the gear onto the rope, and we would use the loop like a pulley system. Easy in, easy out. Right?

We headed outside as the sun nestled into the horizon – the perfect hour to start an outdoor project in the dead of winter in a cramped and inaccessible place! 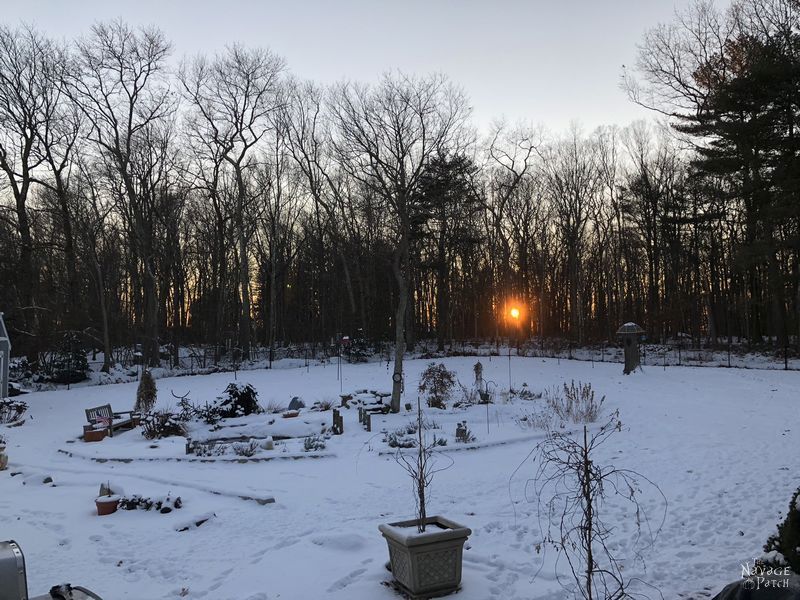 Handan needed to be here: 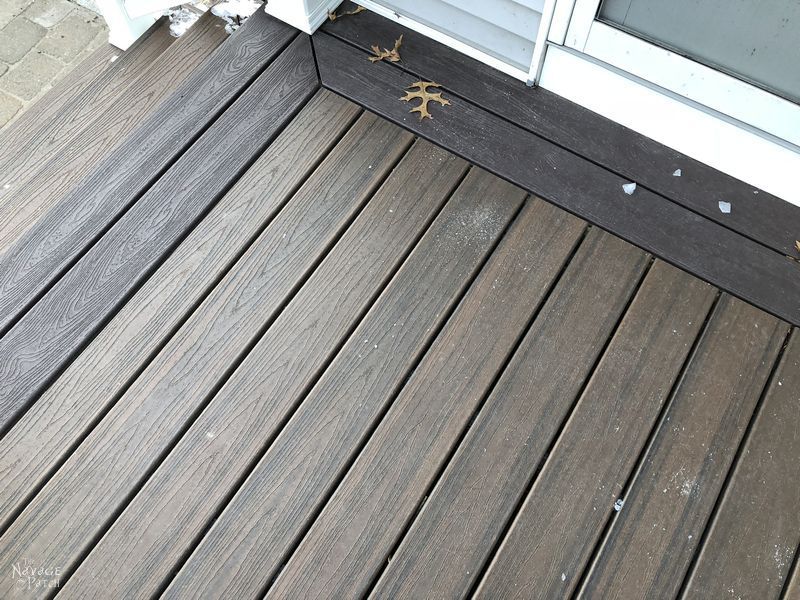 What I mean is that she needed to be under there.

Here’s another shot of where she needed to be under. 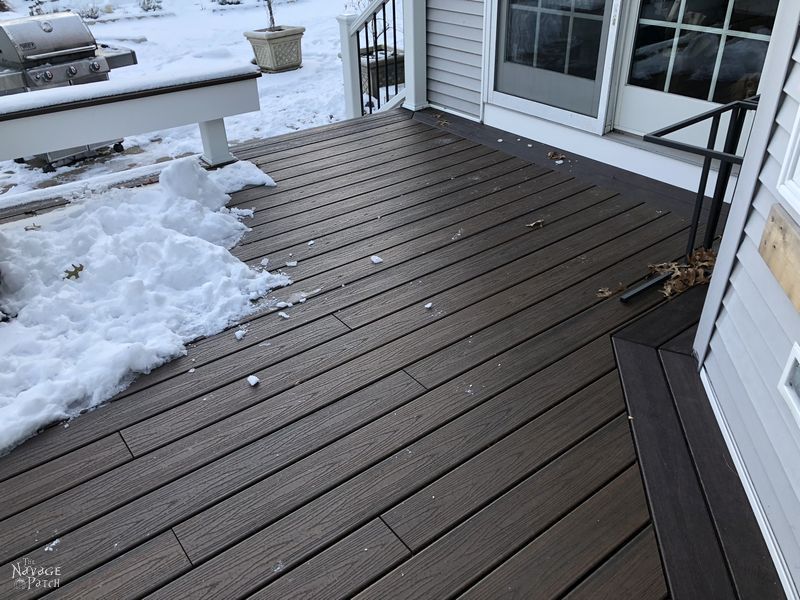 If you look at it from this angle, there doesn’t seem to be a way under. 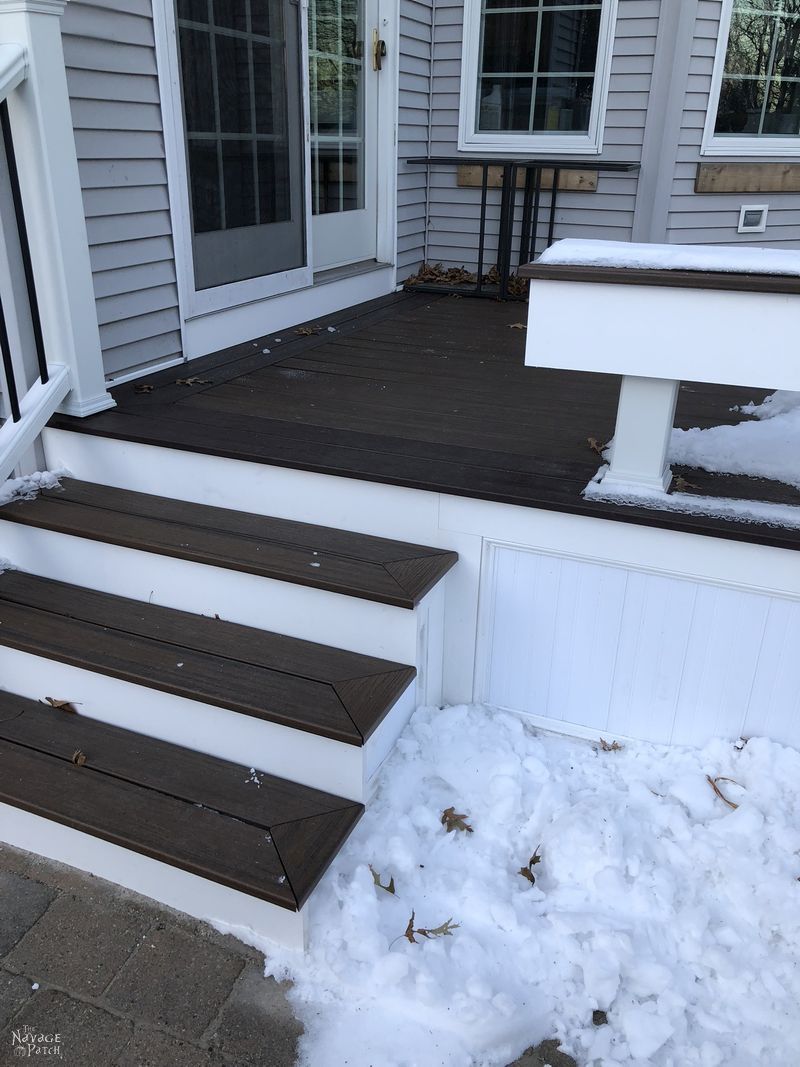 Oh wait – I remember! We put a little door on the side of the deck. Way. Down. There. 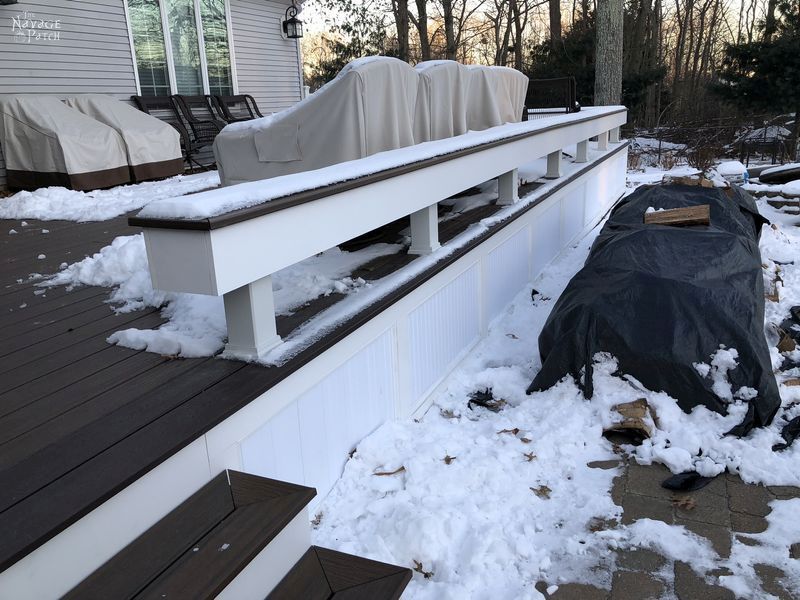 It was a beautiful evening, despite the bone-shattering cold. 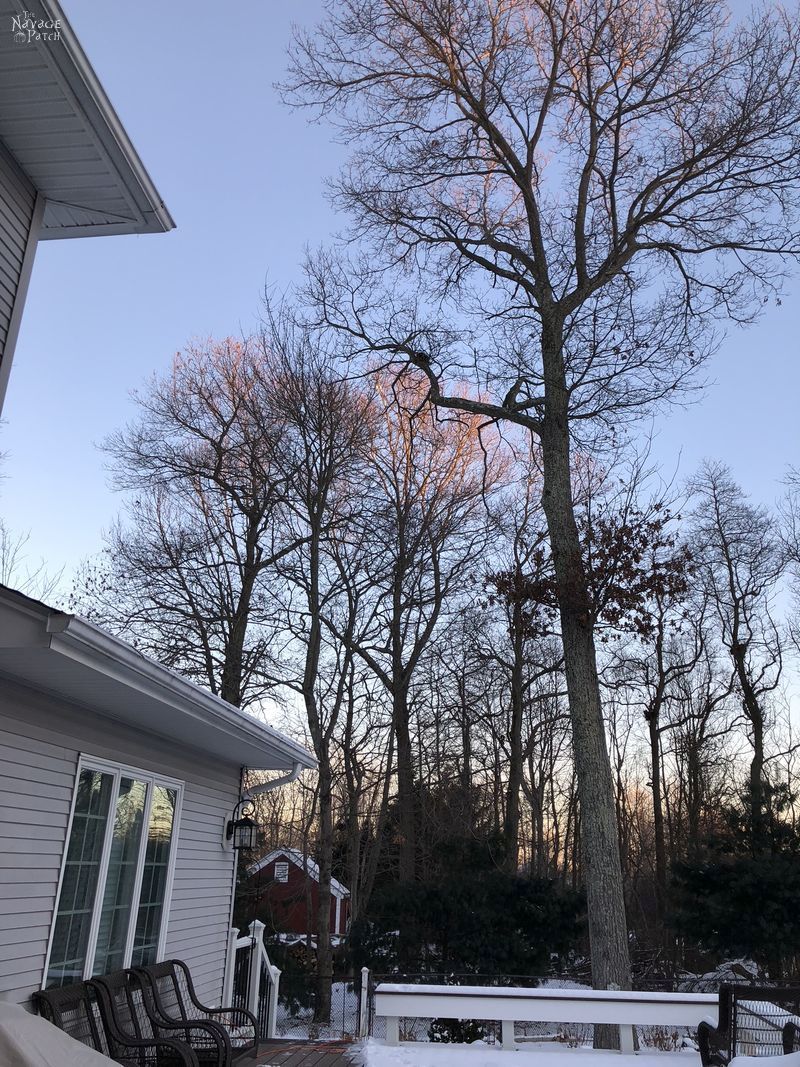 I set up a powerful flashlight by the opening, 35 feet away from the house. It would be Handan’s only source of light. 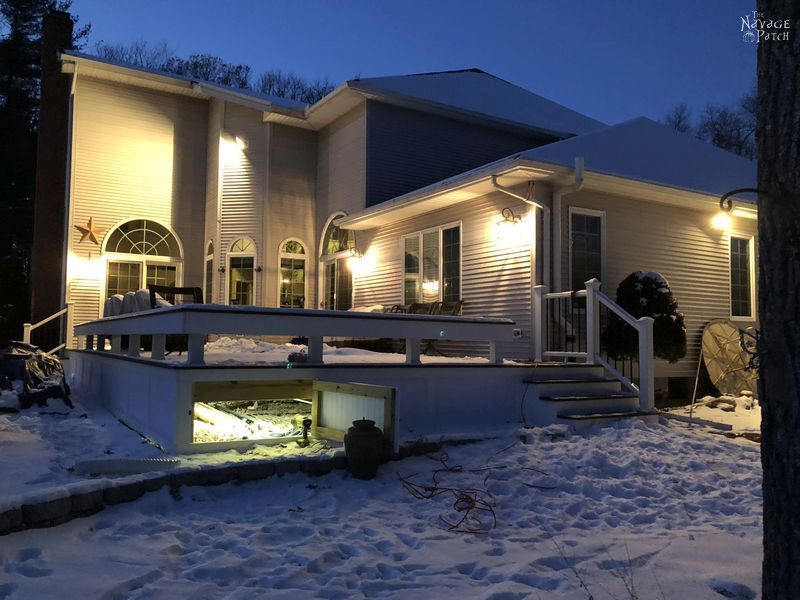 She entered the hole, and belly-crawled along the frozen stones. 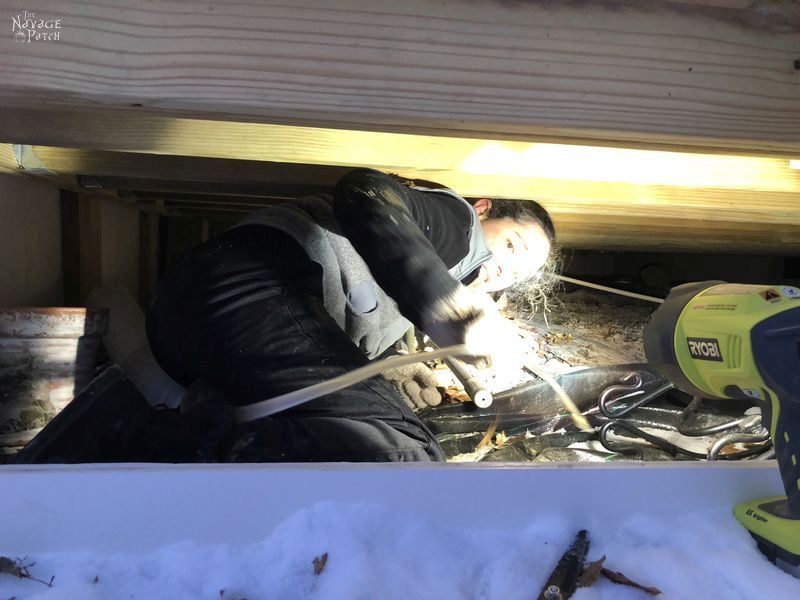 Once she reached the house, I sent her the tools, and she began thawing the pipe with the hair dryer.

There she is. Can you see her? 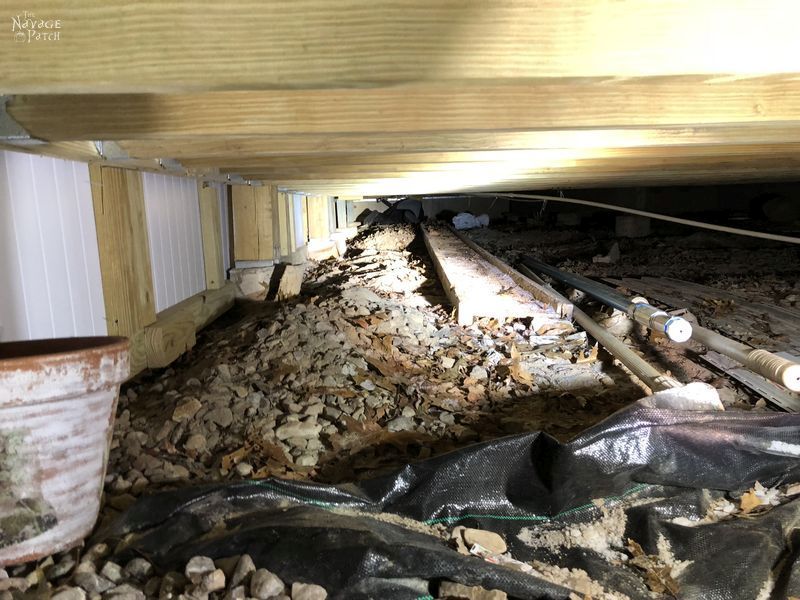 How about how? I think she’s smiling! 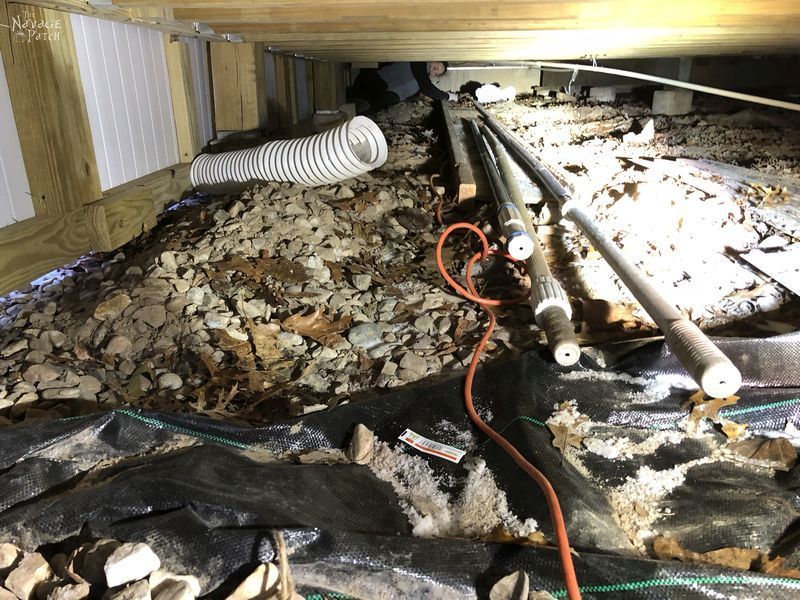 Apparently the hair dryer warmed up the space for her, so it wasn’t too uncomfortable.

I wish the same could be said for me! I stood out in the wind and waited and talked to her and made sure she was okay. Meanwhile, I lost feeling in my toes. Poor me. 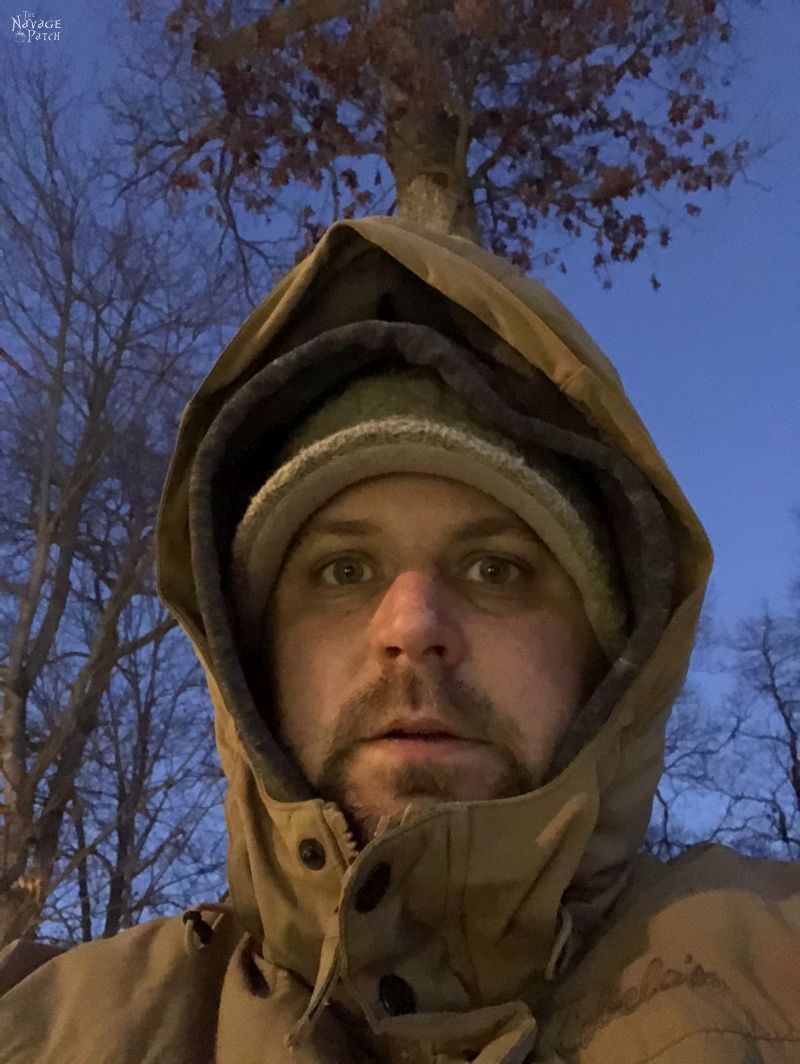 Just as Handan was finishing up her work, the flashlight died. With these batteries, there is no period of slowly waning light. It goes full bore, and then it just quits.

Handan was in the dark.

While I panicked for her, she called back, “It’s okay my babes! I’m coming!” 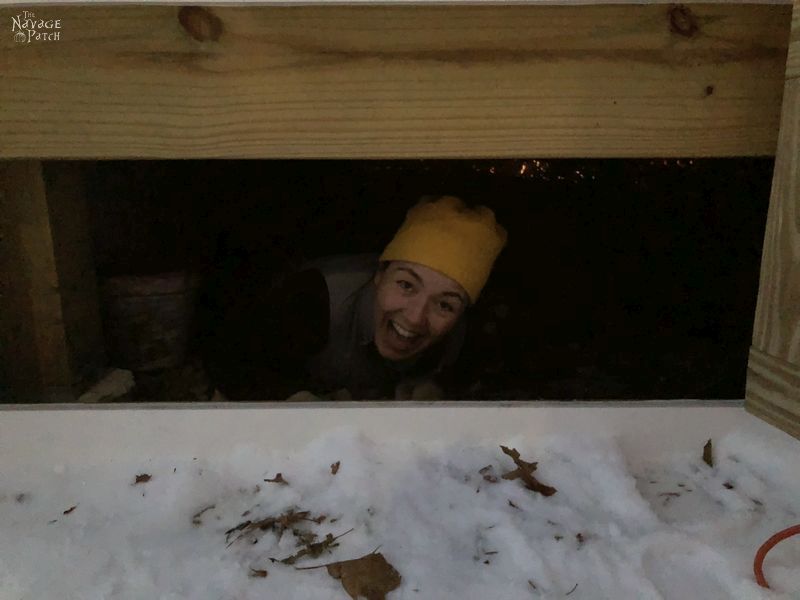 She kinda looked like something out of a horror movie as she crawled out of the dark hole.

But then it was all smiles again. 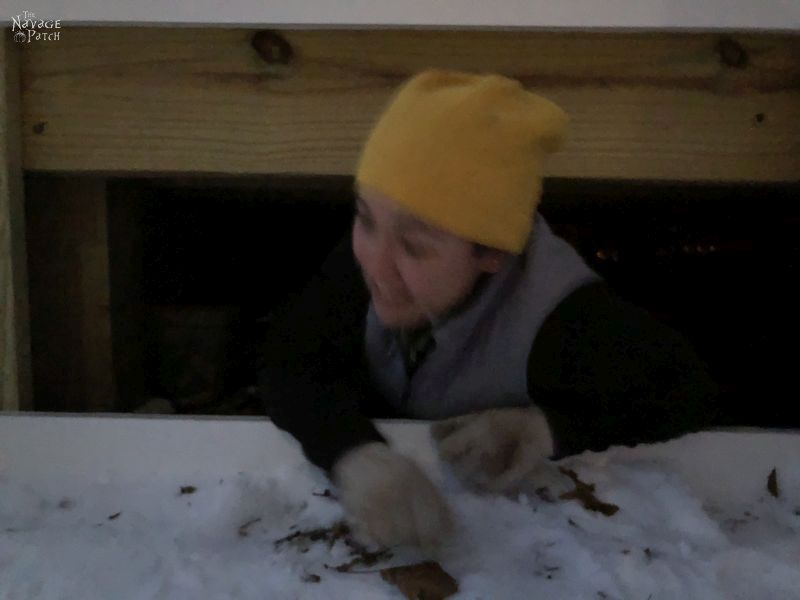 My feet were lifeless ice cubes, and my face stung, but hey, we had time for a selfie! 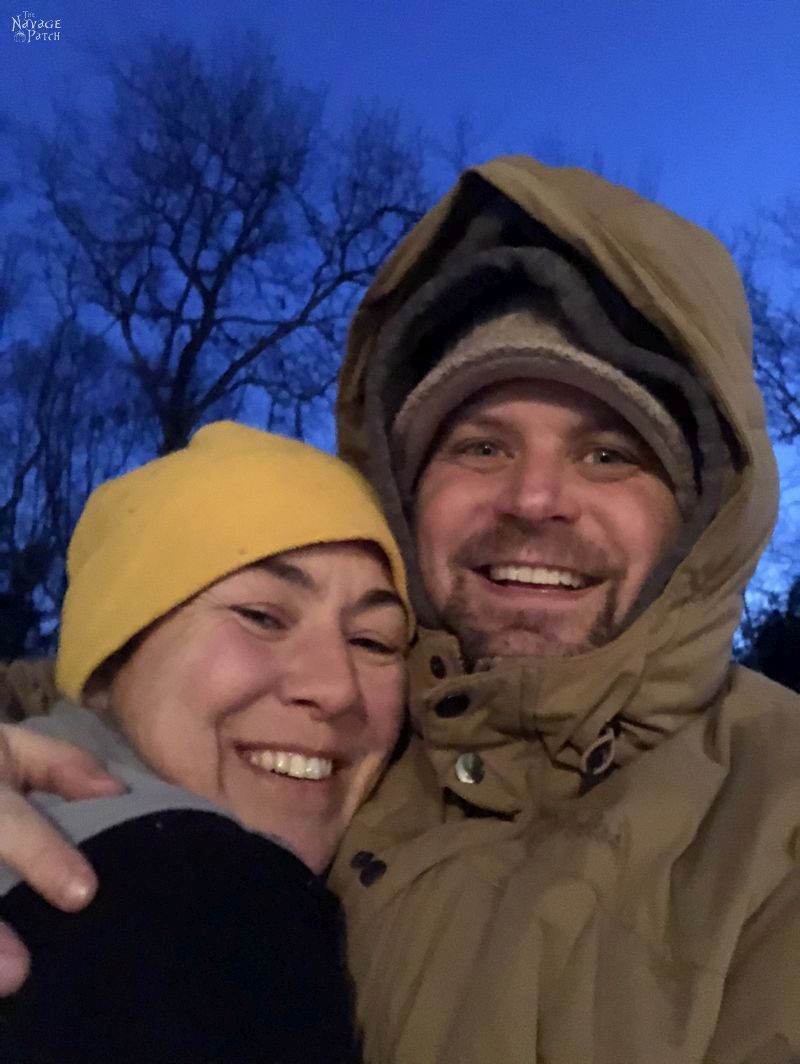 Inside, I set about reclaiming my toes. 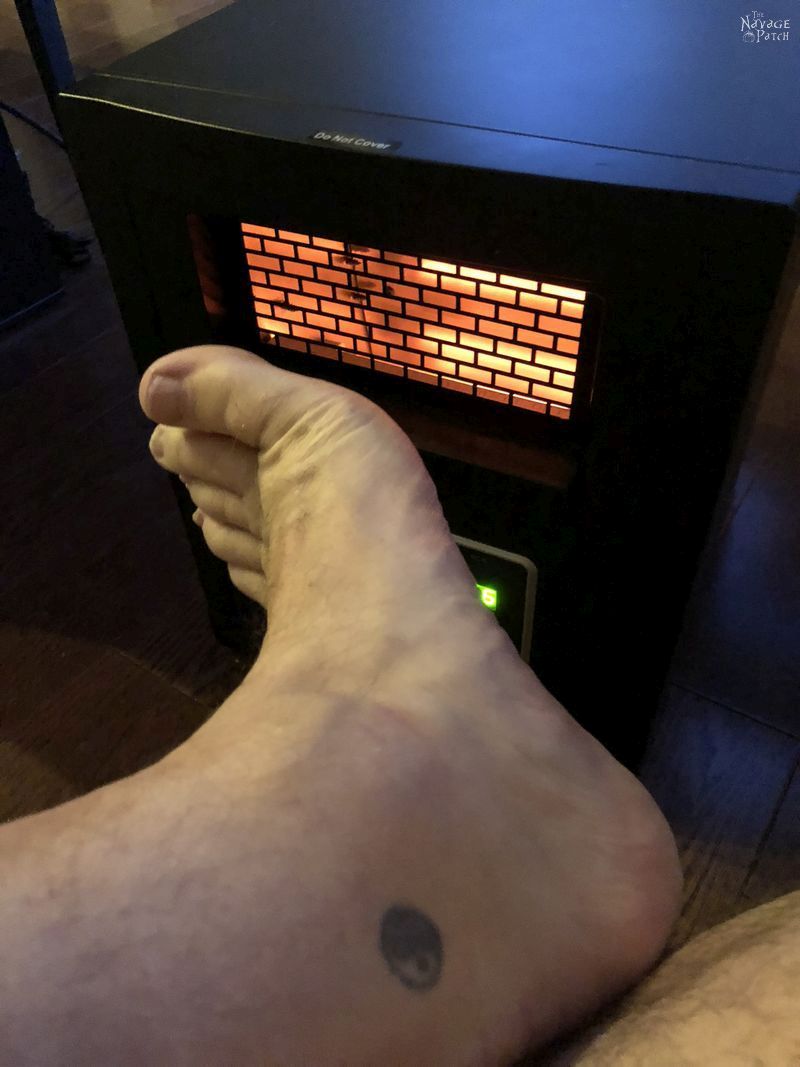 When feeling had returned, I went downstairs to plug in the condensation pump…

Handan and I went down mid-morning to do some cleaning. I had been down there at 5am to jump-start the furnace (that’s a whole different joyous winter homeownership story), and everything was fine. Between then and 9:30, the pipe froze again, and the basement was even more flooded than last time.

Time to suck some more water.

This time, I have a new plan. I’m tired of running waste pipes to drain into my yard. I want all of my waste water to drain into my septic system…under my yard. When this holiday is over, I’ll be calling a plumber to run both the condensation overflow line and the water softener drain line into our waste pipe. Problem solved for good!

Now, about that furnace… 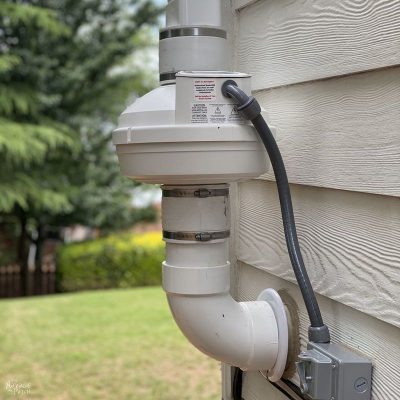 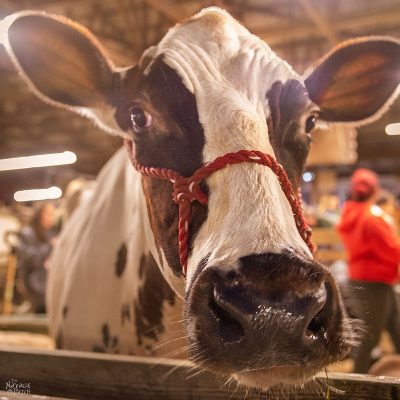 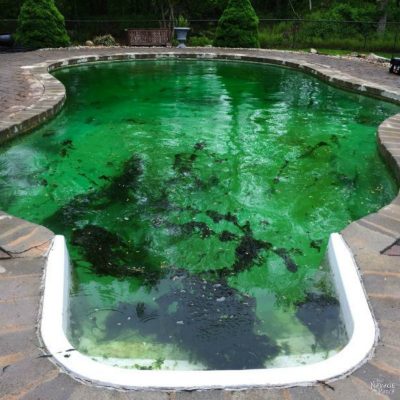 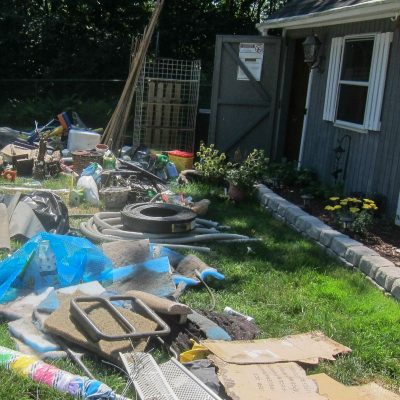 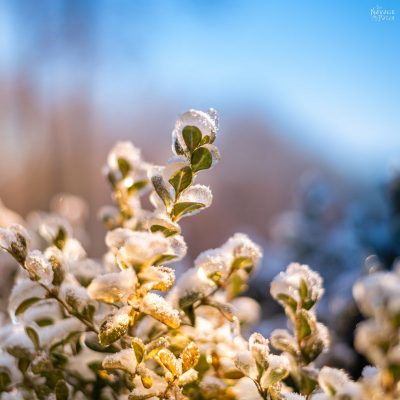 The Navage Haps (& How to Pronounce Our Name!) 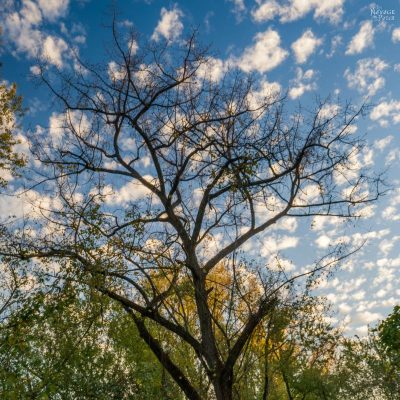 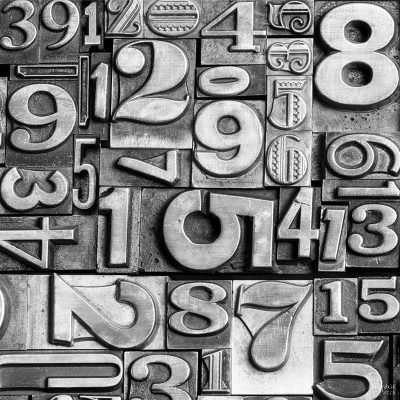 Digging Up Numbers in The Patch