My first thought upon waking the next morning was coffee.

I had loaded my Starbucks app with $100 before the trip, and I was ready to start charging. I opened my iPad and searched for Starbucks near us. There was one in our hotel, but I had seen it the night before. It wasn’t a real Starbucks, but rather a kiosk within the hotel’s pizza/sandwich/snack bar. I don’t trust those. I wanted a proper store. I found another promising one on the map and told my phone to take us there. After a five minute drive, Robot Woman instructed me to turn into another hotel.

I picked another Starbucks from the map. Robot Woman led me into a parking garage.

I could see that I was going to have to have a real difficult talk with Robot Woman after the holiday. I gave up on her and shut her down. We would have to abide the pseudo-Starbucks they slung at our hotel. I got back on Rt 535 and started heading back towards the Hilton. It was a 3-lane road, and I was in the left lane. I was bitching to Handan about the utter lack of proper Starbucks stores when I saw the sign off to my right.

“STARBUCKS!” I screamed, and jerked the wheel to the right, cutting across all lanes of traffic. Handan screamed and started praying in Turkish as our Camry careened towards the narrow driveway.

“YES! Yesyesyesyesyes!” I was thrilled, Handan was terrified, but we would have our proper coffee!

Oh, and what a Starbucks! I’ve been in countless stores in almost every state and in several other countries, but the Starbucks located at 13401 Blue Heron Beach Drive in Orlando is the best I’ve ever encountered. The friendly crew is anchored by Scott on the register, the most outgoing and hilarious barista I’ve met, and by Lisa on the Espresso machine. From the first day, they made us feel like locals. On our second visit and all the rest thereafter, Scott remembered my name and our order. That’s customer service! Are you reading this, Starbucks Corporate Headquarters? Give Scott, Lisa and the crew a bonus. Or a medal. Or a medal wrapped in cash. Do something, dammit! Good baristas don’t just grow on palm trees!

We were caffeinated and ready for action. I loaded the family into the car, and we lit out for Universal Orlando.

Enough of my ham-fisted prose. Let’s see some pictures! 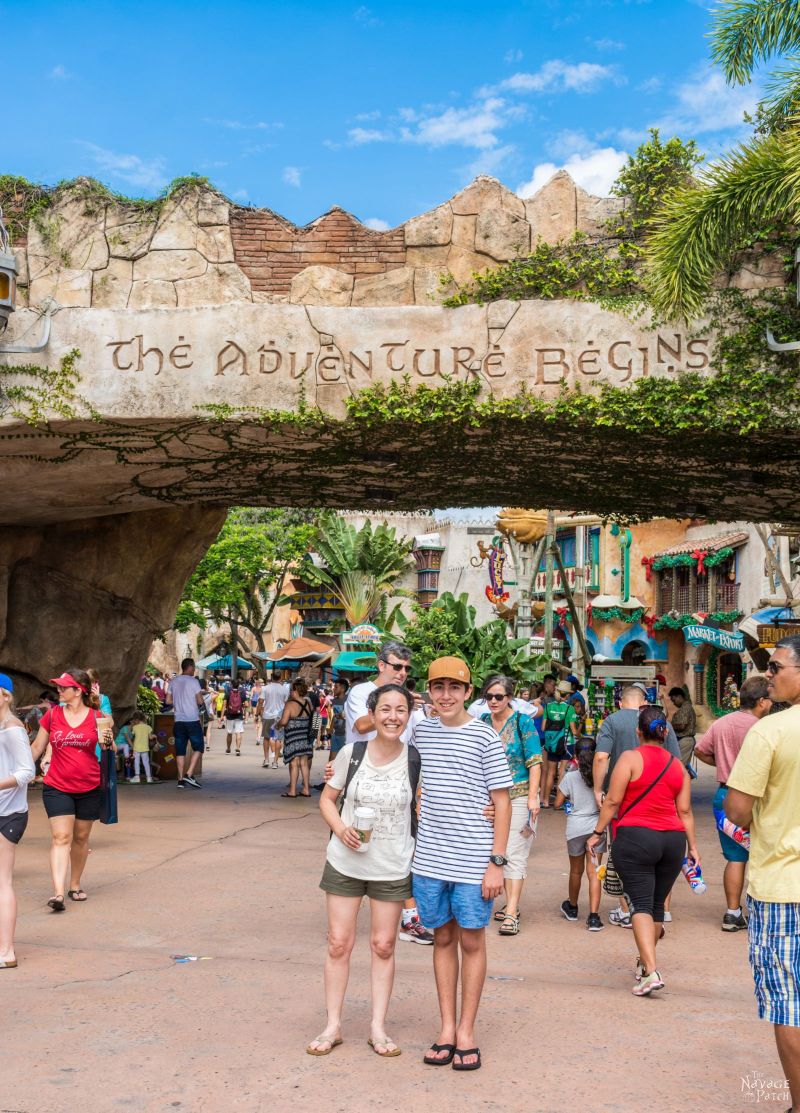 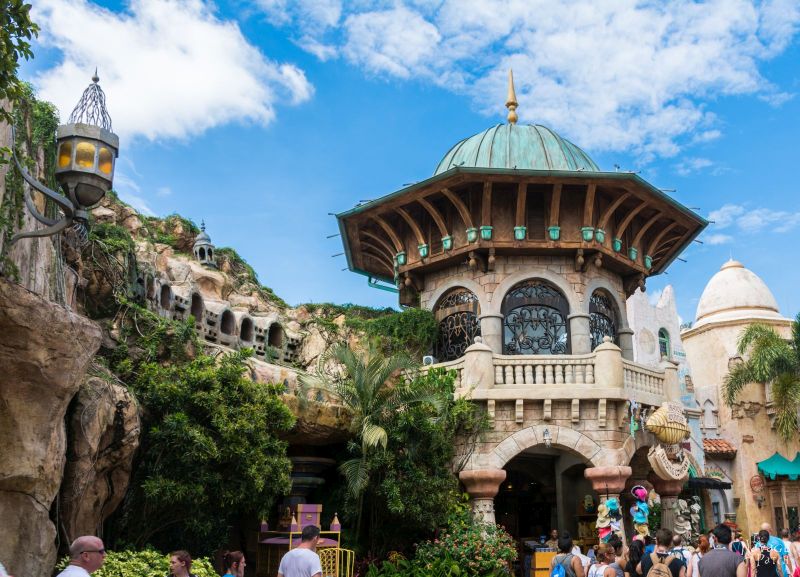 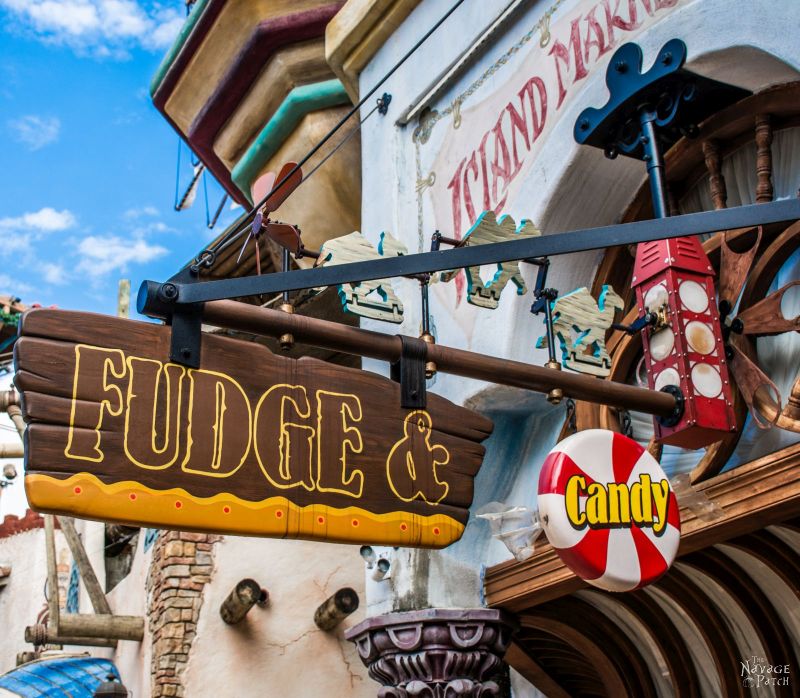 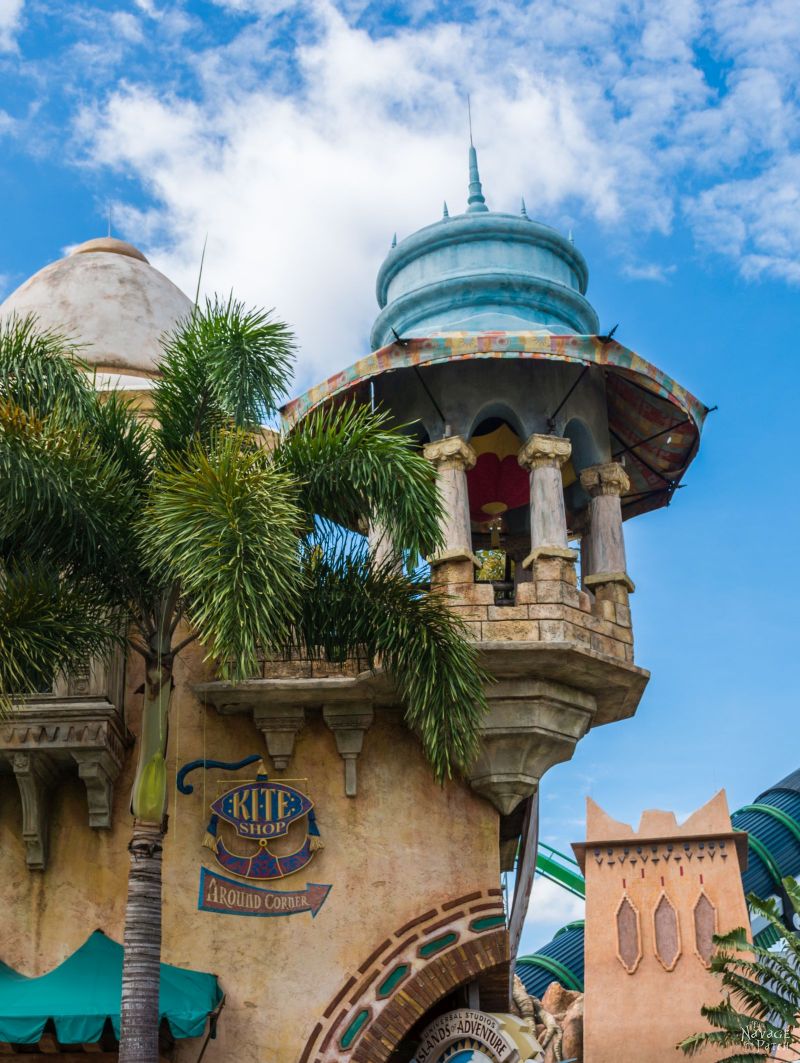 Islands of Adventure was overwhelming that first morning. The sights, the sounds, the crowds and the heat! Oh, the heat. I hadn’t hydrated enough that morning. Within a half hour, my head started to pound. But there was so much to see and do! It was an assault on the senses, but not in a bad way.

Universal gets big points for having a lot of water features sprinkled around the park that double as cooling stations. 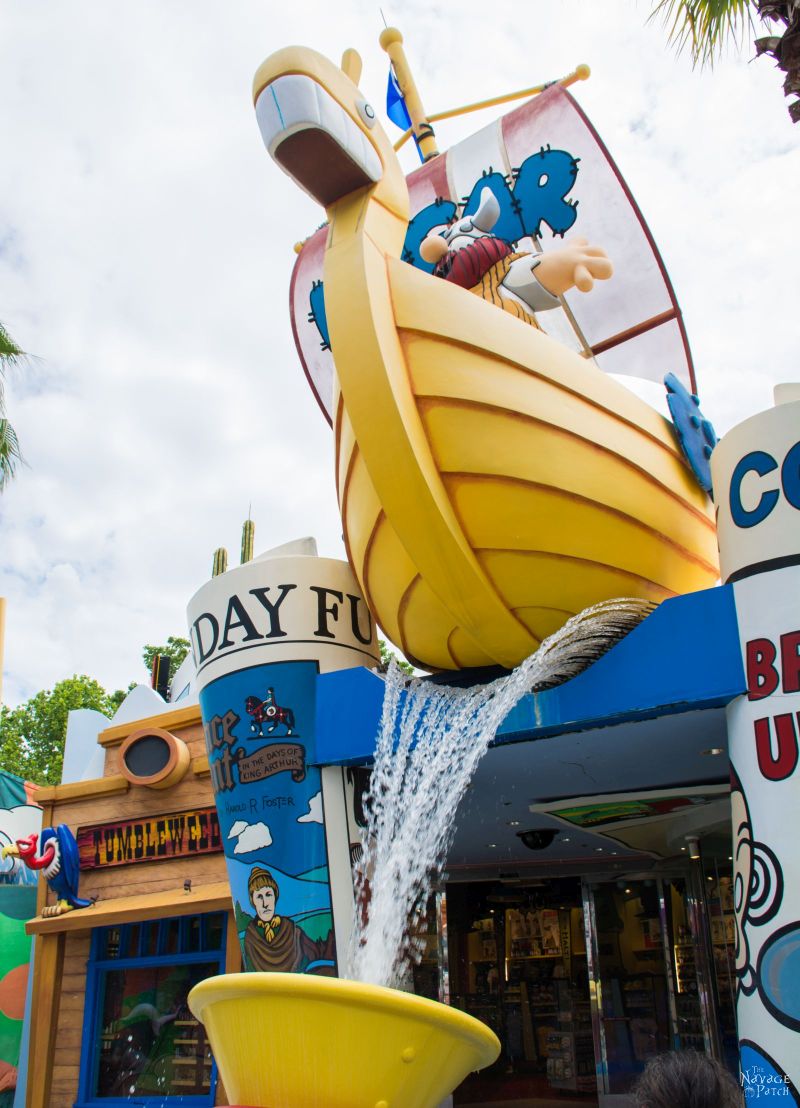 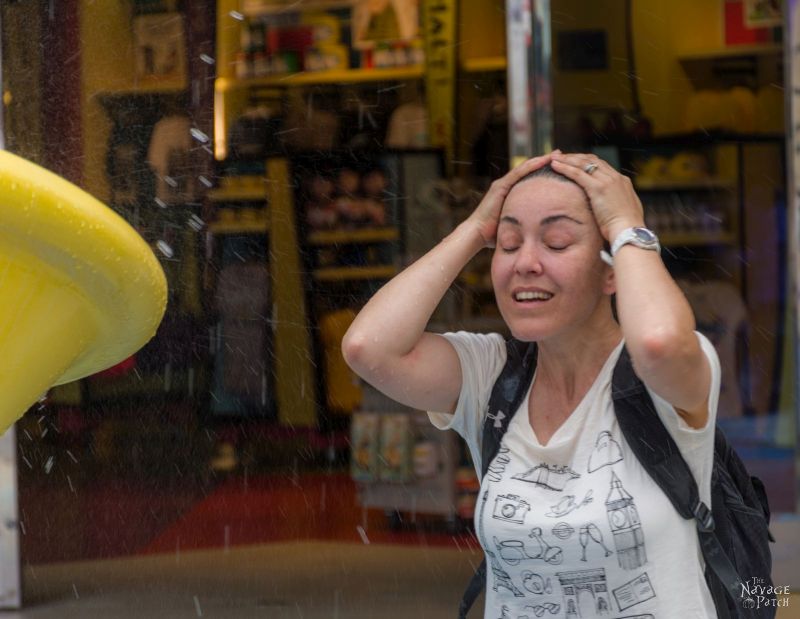 The first ride that Handan wanted to go on was a pretty standard flume ride that ended in a steep drop and a big splash near a pedestrian overpass. I volunteered to hold Handan’s bag and Barish’s phone while they took the ride. I camped out on the bridge and trained my lens on the drop. We paid extra for fast-passes that would let us cut the lines, but since I couldn’t see the line from the bridge, I had no idea how long it would take until Handan and Barish came barreling down into the pool. I decided to take photos of every log until I caught them. I was taking burst photos, so about 300 photos later, I finally got them.

You can’t see it zoomed out like this, but one person is screaming for joy, and the other looks a little unsure. I call this the “Oh, shit” moment. 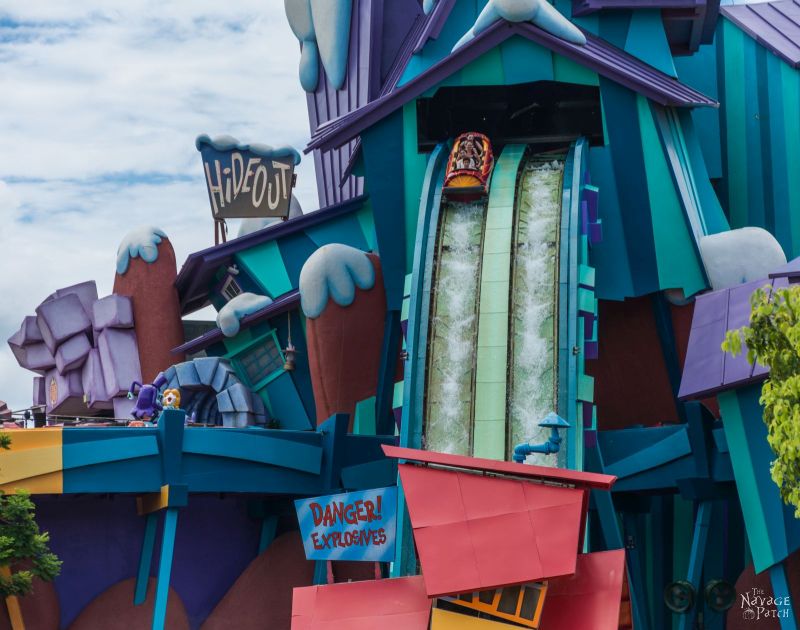 Let’s crop in and take a closer look. 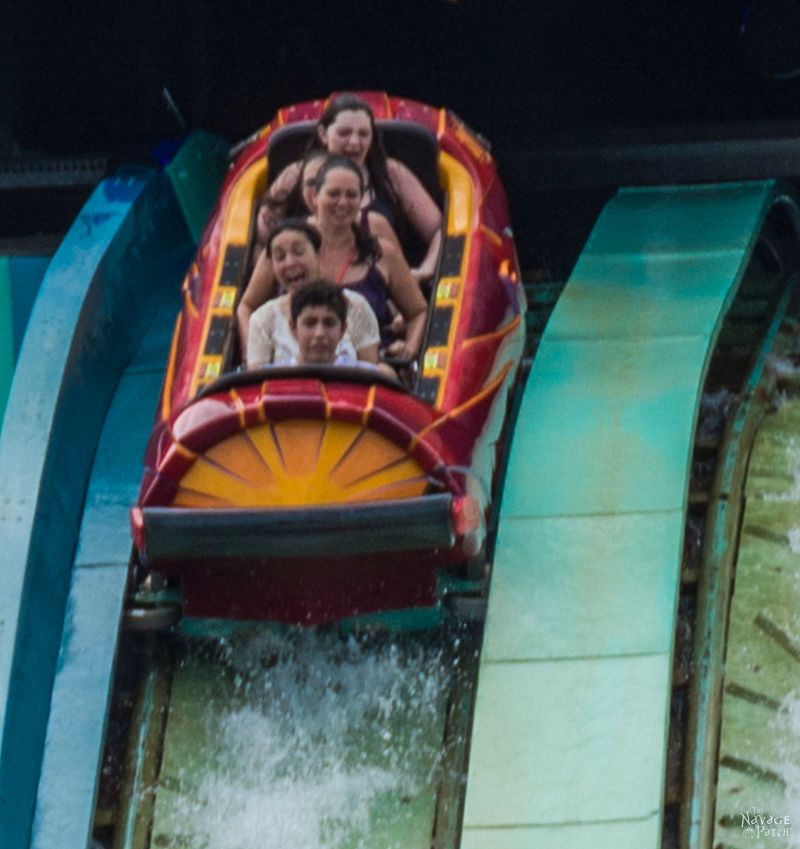 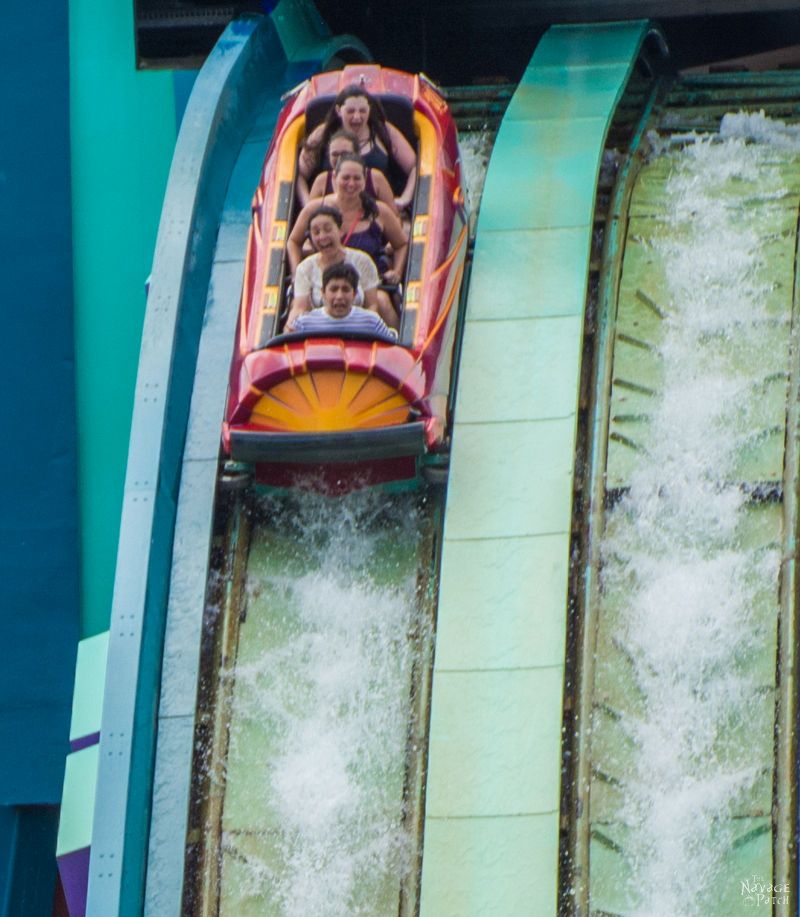 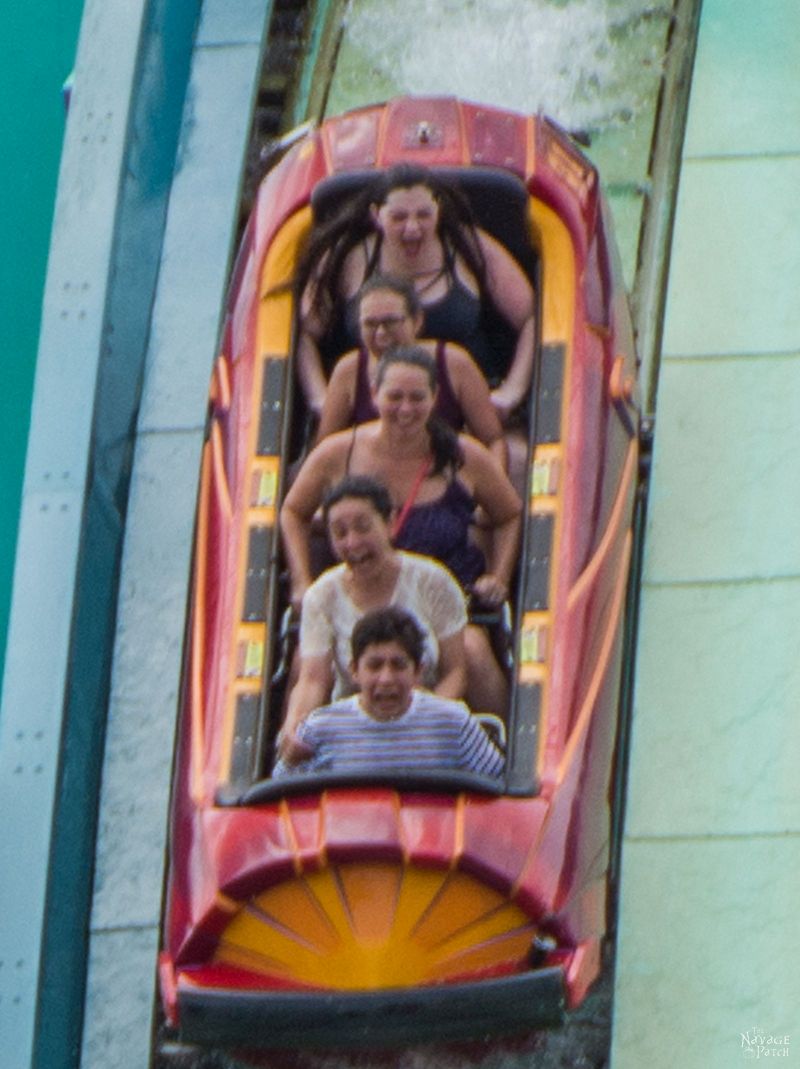 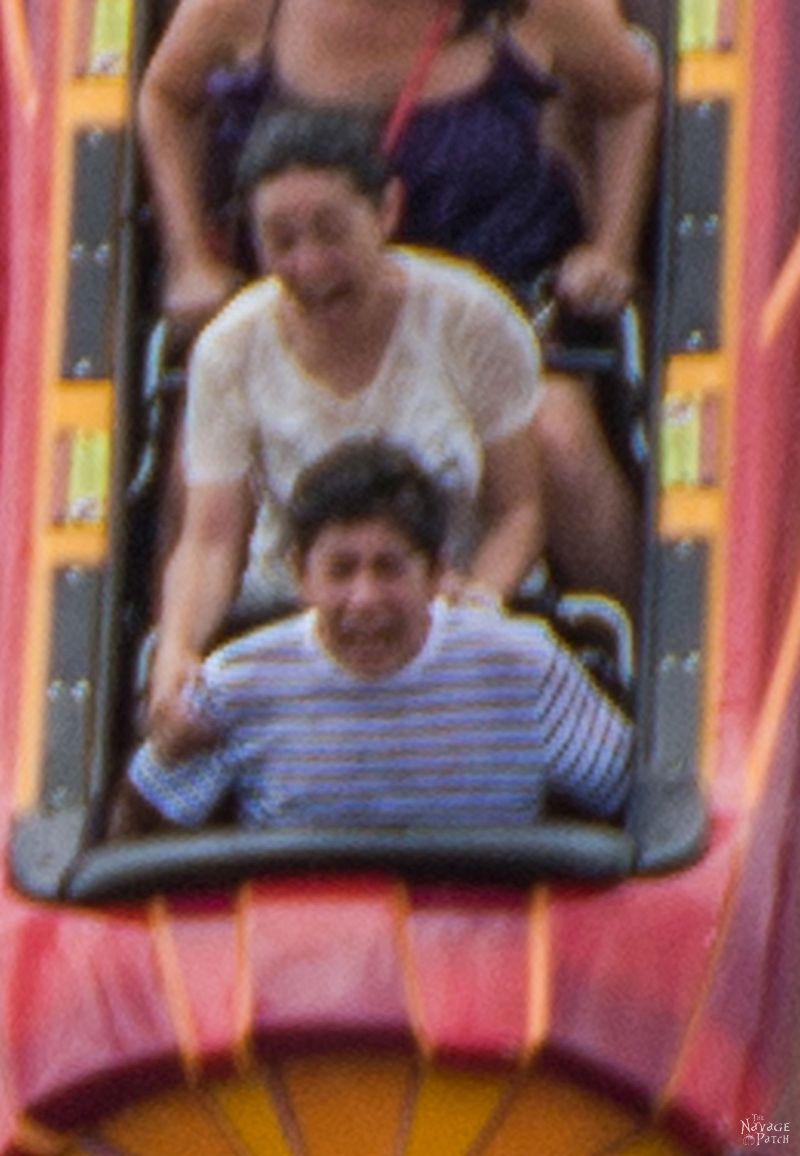 But just when you think it’s over… 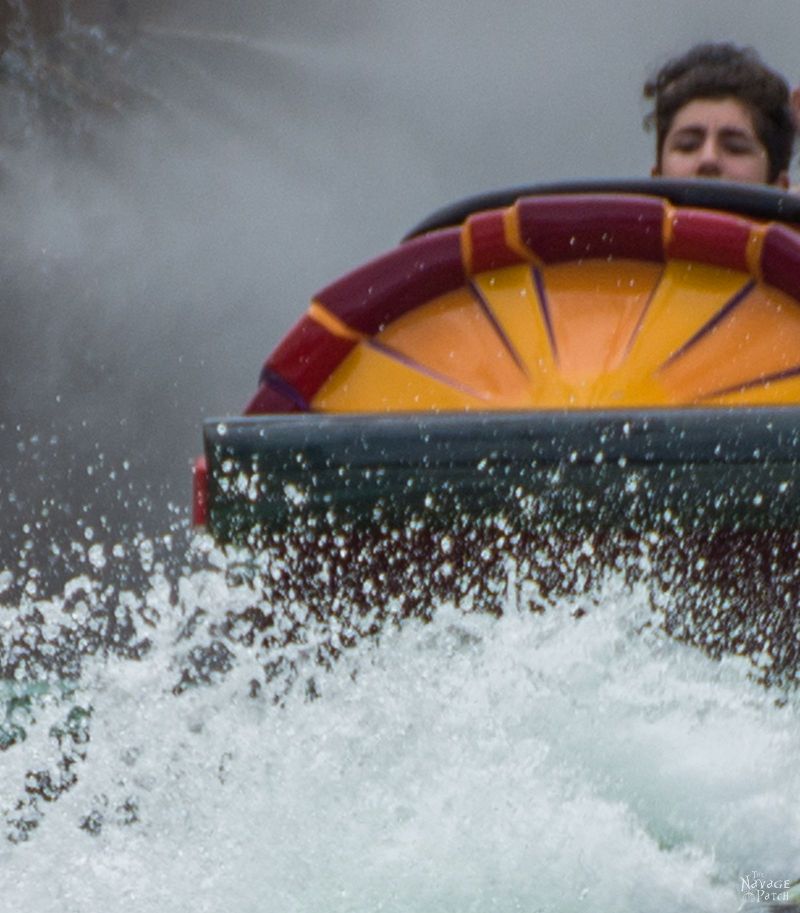 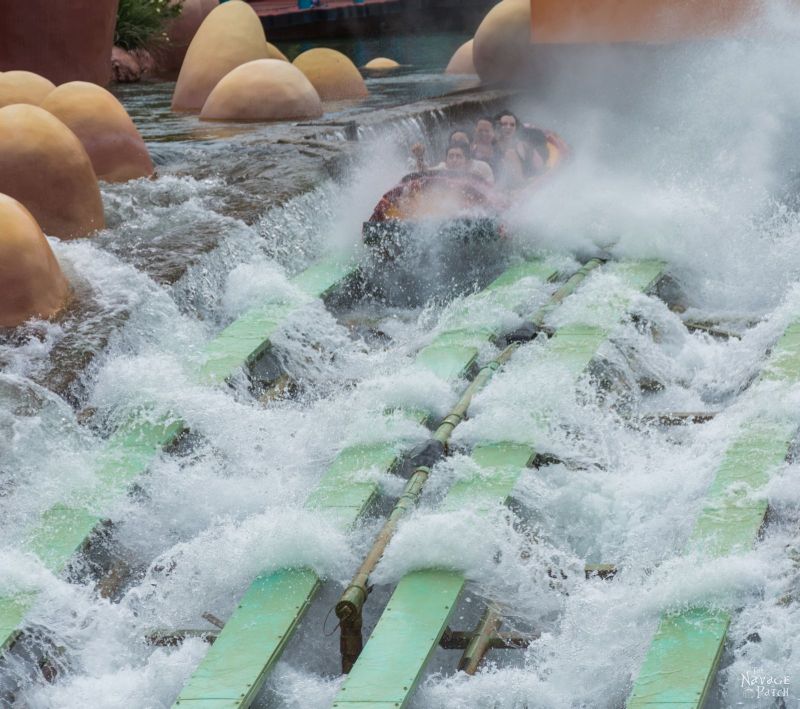 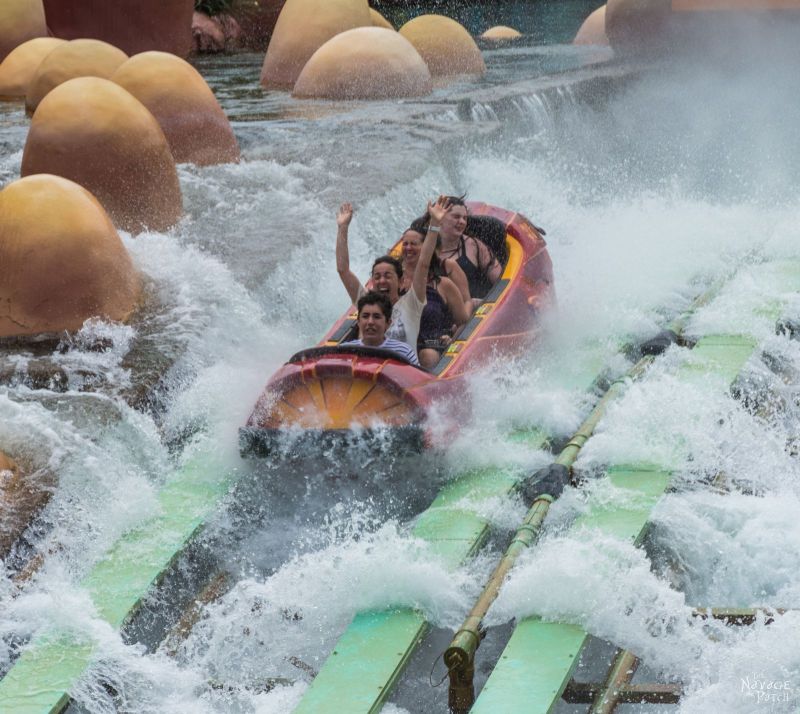 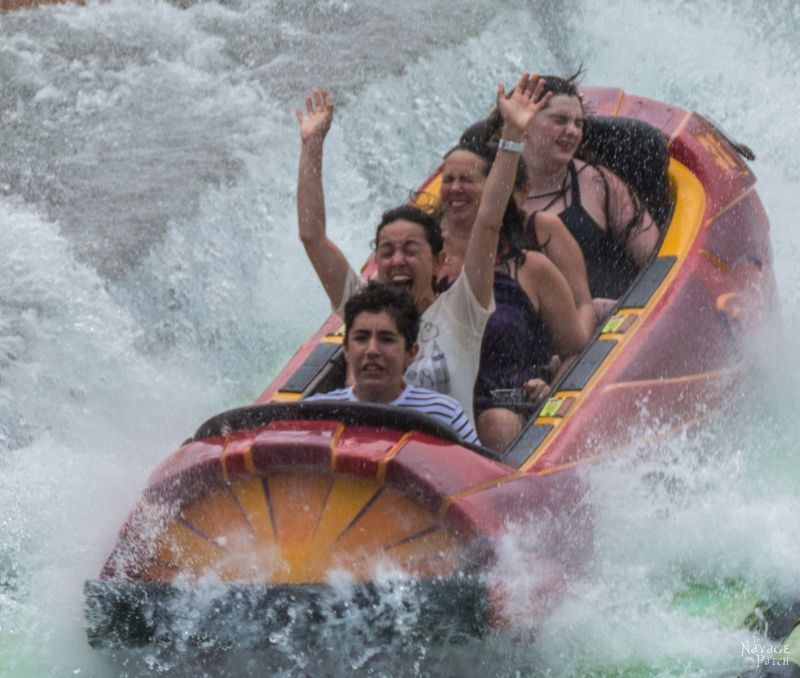 Somebody loved that ride, and somebody hated it.

They were soaked like bilge rats. The human dryer did little to help, but Handan enjoyed it all the same. 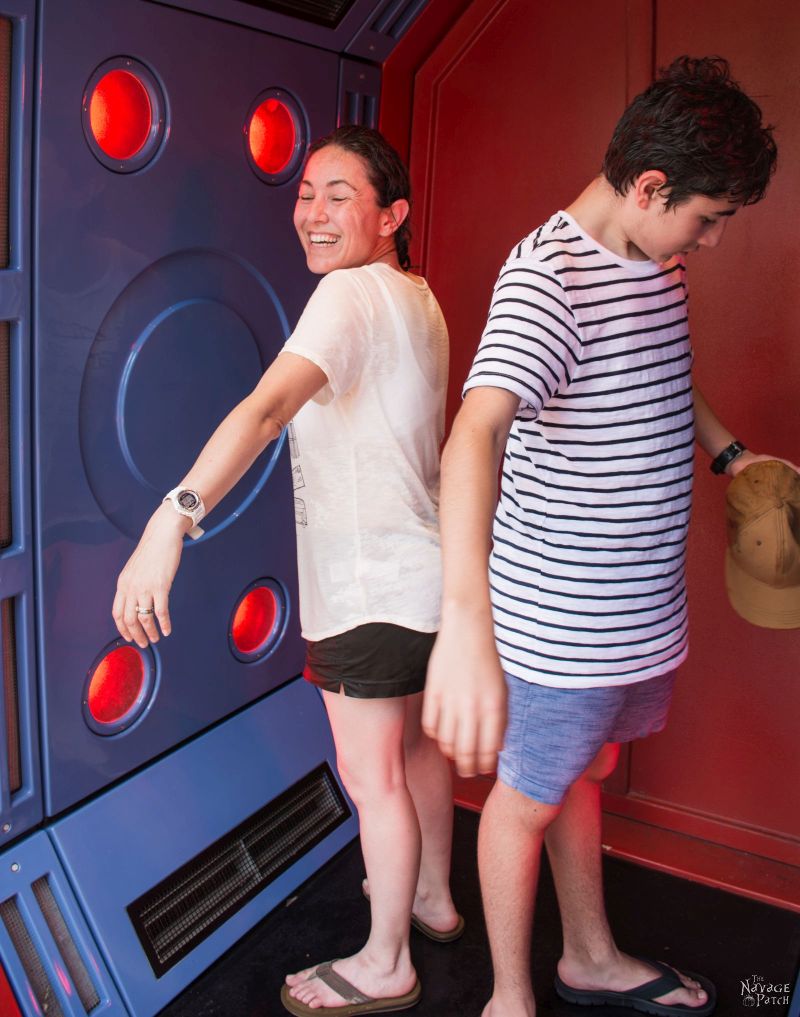 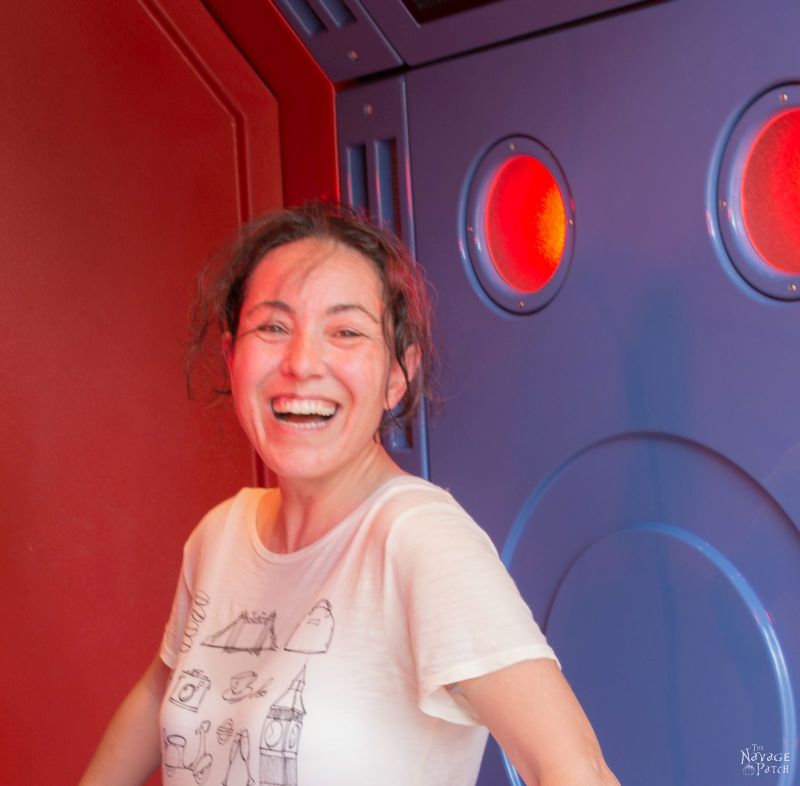