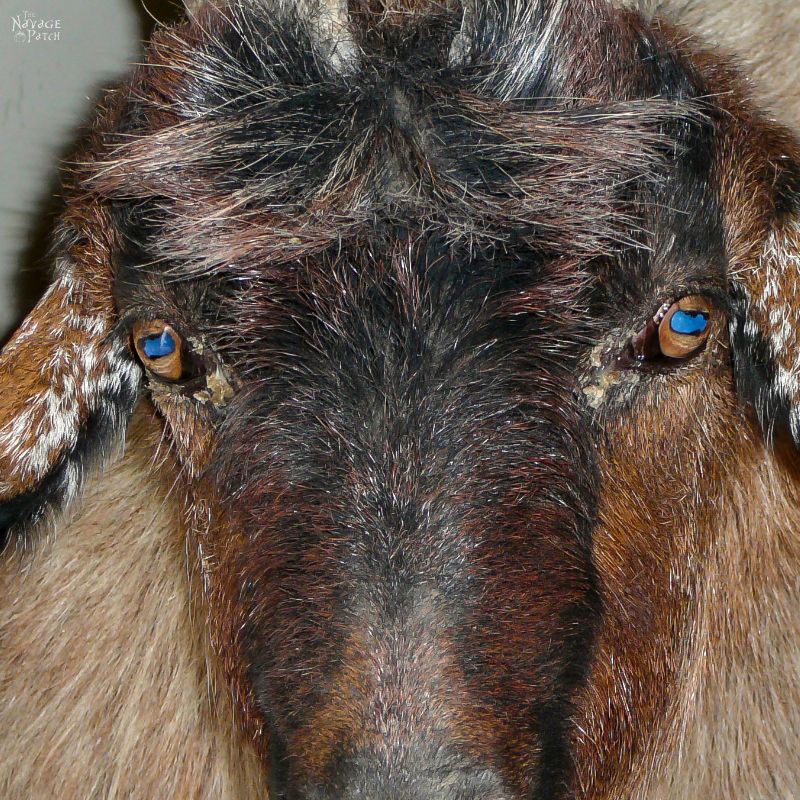 Early one morning, shortly after we arrived at Camp Bastion, I walked from our “house” to the office area. I always went alone, because Handan needed more time than I did to wake up and get ready. Since I would arrive first, I would stop by the tea room and make an instant coffee for me and a tea for Handan (it was too early for the tea boy, Hayrettin, to be working). On this particular morning, when I turned the corner into the office courtyard, I found that I was not alone. Through the morning twilight, I saw that something shared the courtyard with me – a beast with blue horns. Blue horns. Wait, what? I stopped and stared, my caffeine-starved brain trying to make sense of what I was seeing. Four legs. Shaggy brown-and-black fur. Blue horns. It was a blue-horned goat. Ho-kay then! Time for some coffee.

After I’d had a few sips to clear out the cobwebs, I walked back out into the courtyard to have a closer look at our new office-mate. I could see now that the horns were painted blue, to what end I could not say and never learned. 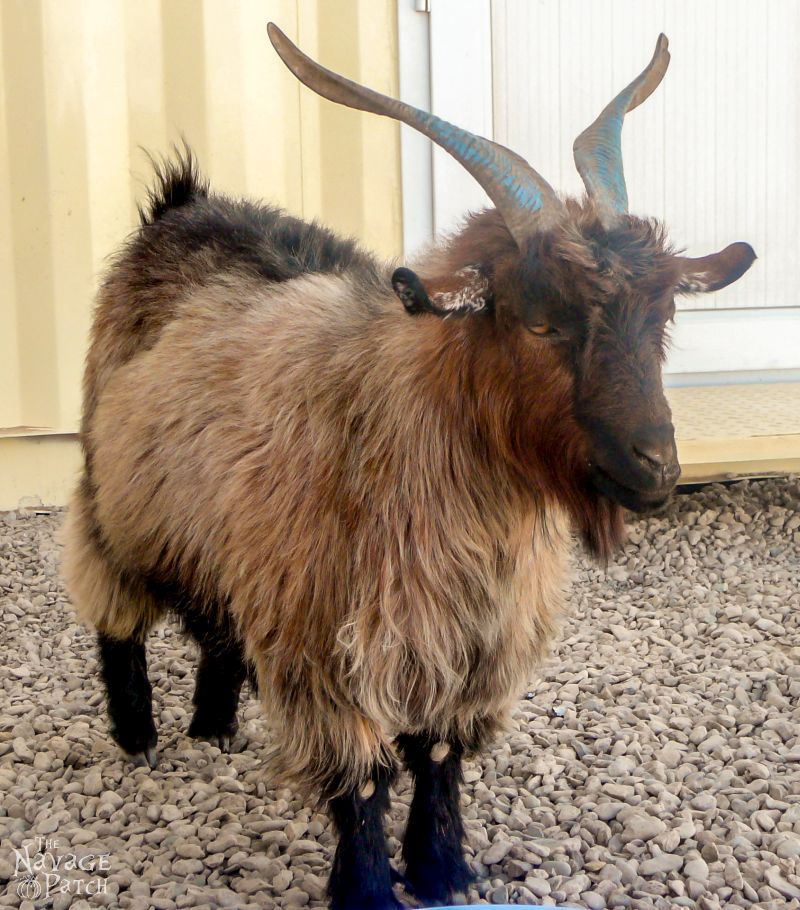 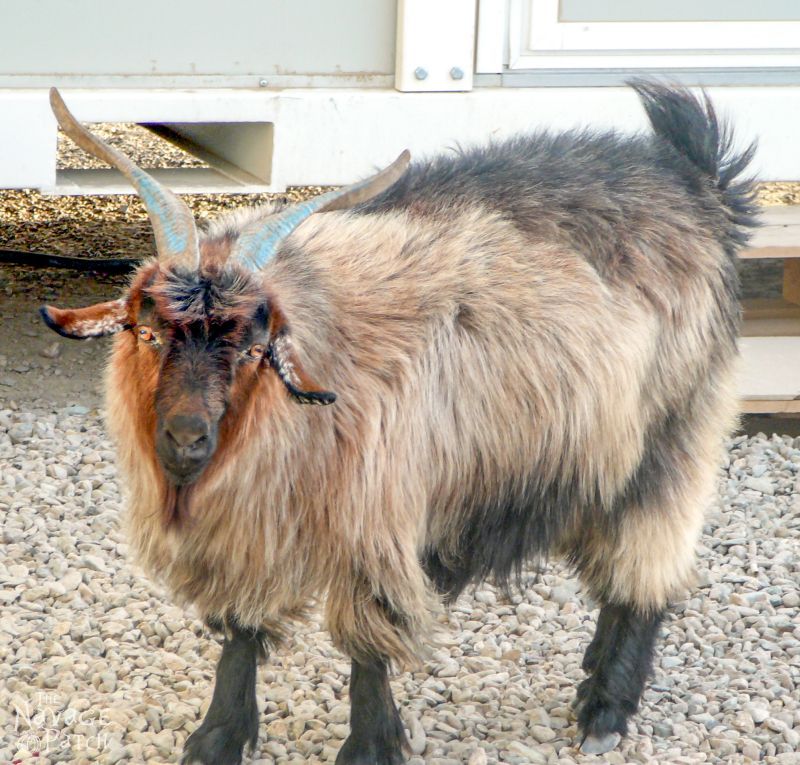 If this goat wanted to hang out with us, who was I to say no? We named her Blue and gave her an upturned trash can lid that we kept filled with water and old bread and whatever food we had left over. We soon learned that she was purchased with some other goats as food for our camp (they really are delicious), but old Blue turned out to be pregnant. Instead of killing her, they put her out to pasture. She chose to pasture in the gravel of our office area. I guess it wouldn’t do to kill her when she was carrying future food in her womb. So Blue received a stay of execution, and we received a pet. She soon came to trust us and allow us to pet her. 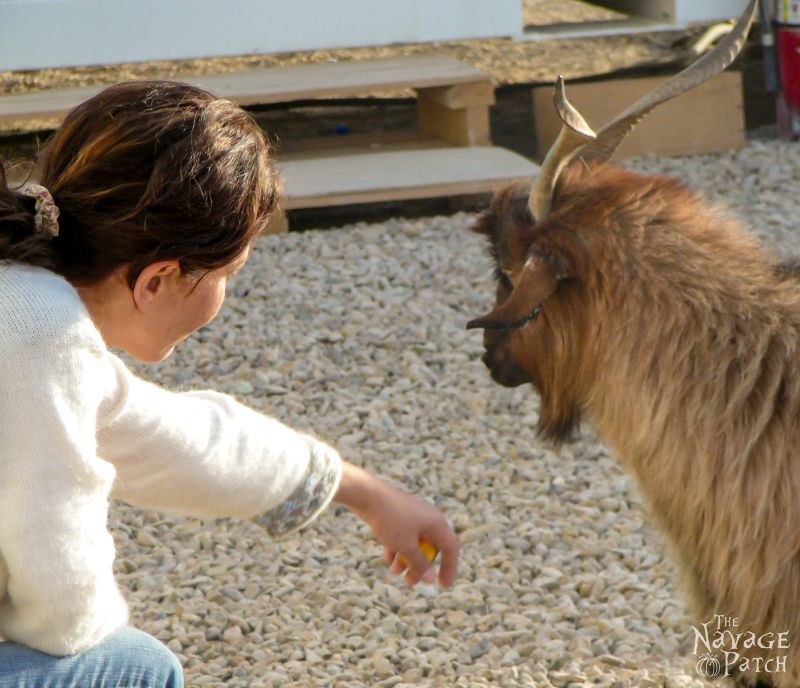 As you know, goats love garbage, and Blue was no exception. She liked to nose around in the trash cans looking for her favorite treat: used tea bags. Maybe she liked the caffeine kick, but Blue could usually be found with a tea-bag string hanging out of her mouth. I assume the rest of the bag was steeping in her throat somewhere. She even had a preferred brand: Alokozay Black Tea.

Blue’s favorite hangout was Handan’s office. Those two really bonded. Maybe she knew Handan was a female and just felt safer around her. Handan enjoyed the company, though occasionally Blue would cause trouble by eating Handan’s work. 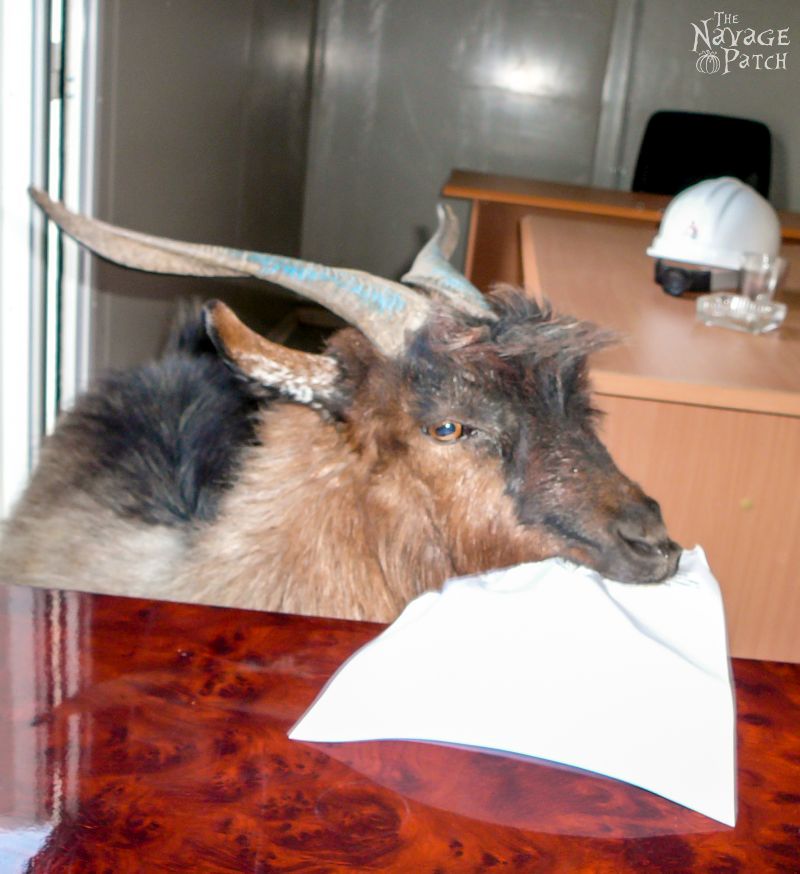 As the weeks passed, Blue became larger and larger. When she plopped herself down in the dirt for a rest, she looked like a shaggy brown blimp with horns. 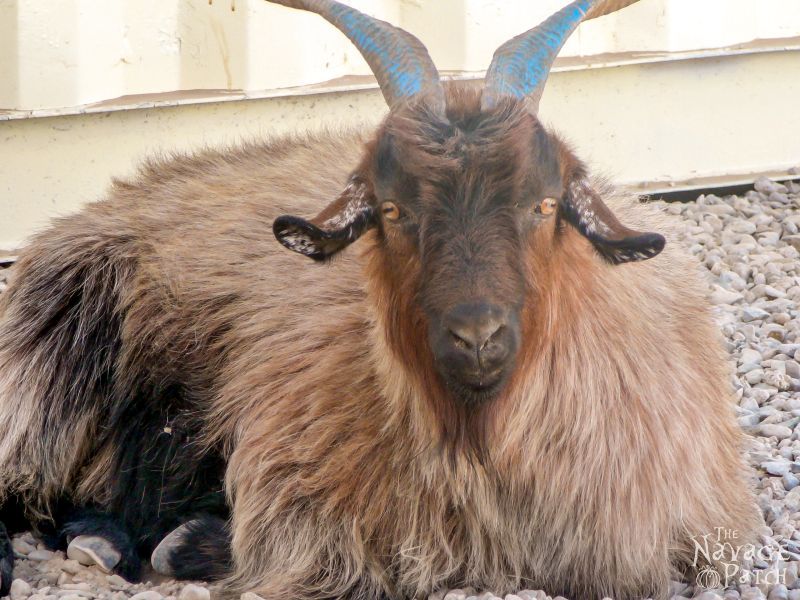 This goat needed to pop some kids so she could start moving again! Relief came one night, shortly after dinner. There was a knock on our door from Hayrettin. He told us that Blue was in labor in one of the empty offices. We ran over to the office just in time to see her giving birth to two slimy little billies. One had a beautiful (and slimy) black coat. I named him Black. The other one was tan and brown with black highlights. He had trouble standing, especially with his slime-covered hooves on the linoleum floor of the office. He would stand, wobble a bit and then crash to the ground, as each of his four legs slipped out and away from his body. I named him Wobbles. Our family had grown by two.

Black and Wobbles spent their days bouncing around the courtyard getting into mischief whenever and wherever possible. They loved nibbling on fingers and clothing, especially mine. 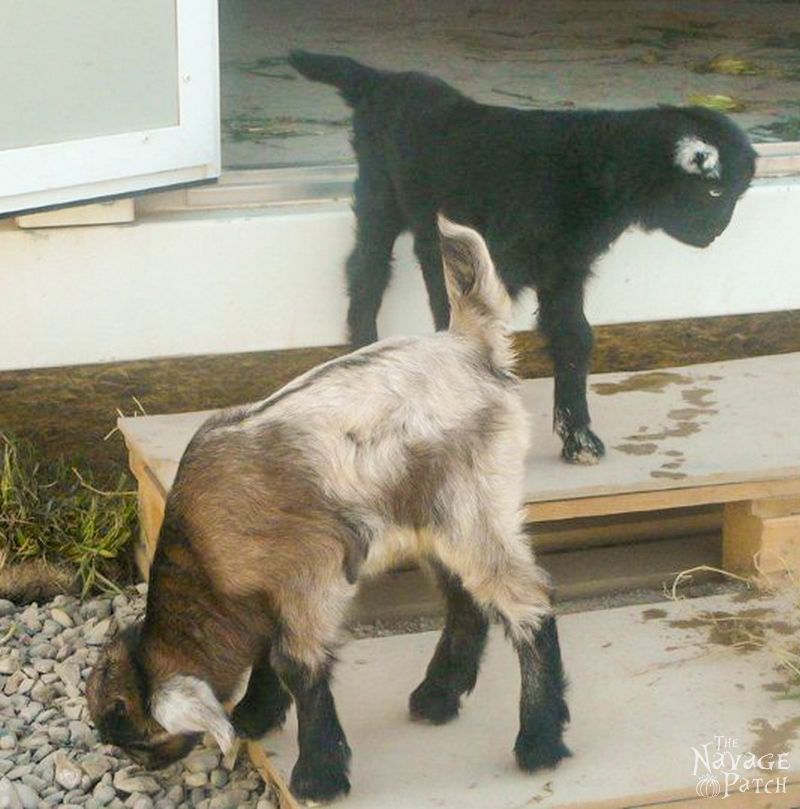 Black and Blue and Wobbles lived with us until February. One day I returned from the work site, and they were gone. Whoever made such decisions in our camp had the good sense not to serve our pets for the evening meal. Instead, they were sold to someone and taken somewhere, for what purpose, I care not to think about.

Projects like ours required a constant influx of goods and materials. From diesel to dinner plates, pickles to pick axes and rebar to raincoats – everything arrived in or on a truck. Many of these trucks were driven by local Afghan contractors risking life and limb on Taliban-infested roads to deliver the things we needed to do our jobs and survive. I always enjoyed seeing deliveries arrive from certain Afghan drivers. While most showed up in battered Tata trucks, limping and gasping and sputtering their way along the dusty roads, some showed up in style. Many American truckers take pride in their rigs and keep them sparkling and new, but they have nothing on these Afghans. You want to see a pimped out ride? Head to Afghanistan. 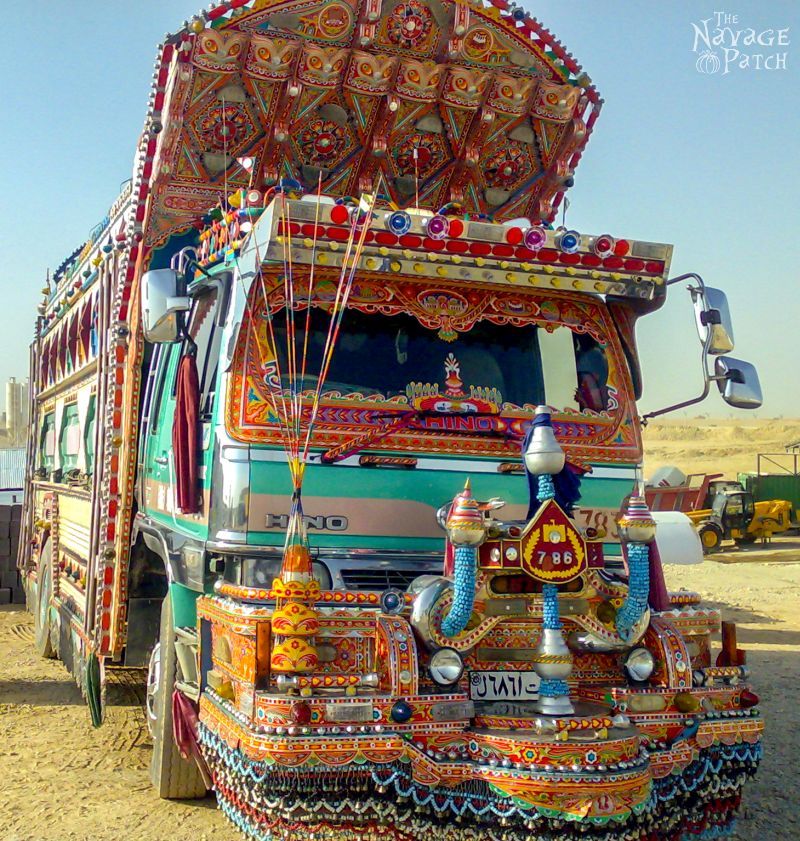 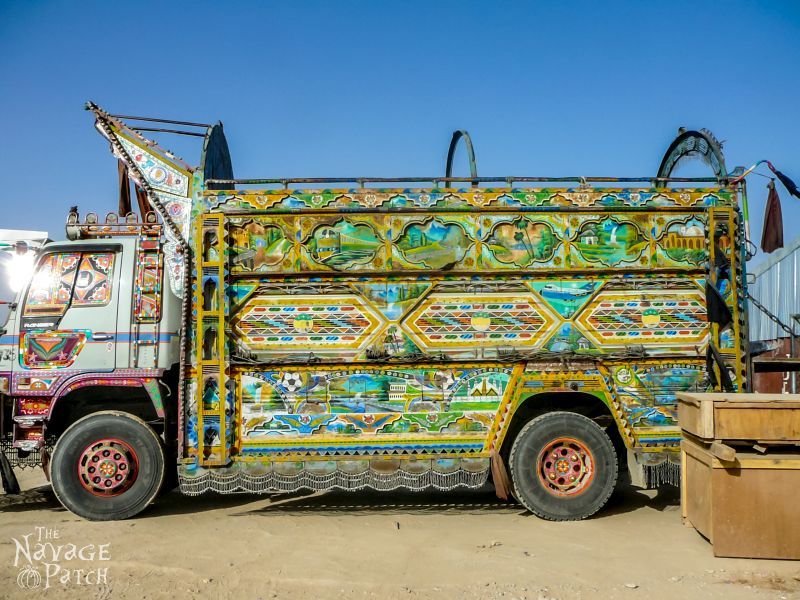 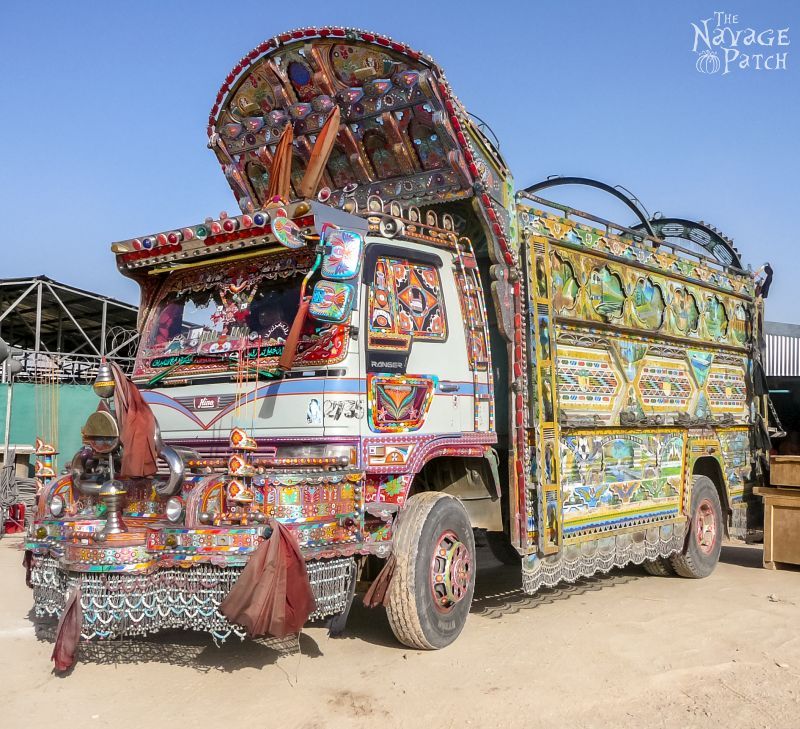 If memory serves, this beauty was hauling a load of firewood for our bakery. The drivers of these rolling works of art must have felt such pride in their machines. I hope they all remained safe throughout those perilous years.

The military loves jargon. Everything has an acronym. So it is with the mess hall, officially called the Dining Facility but commonly referred to as the DFAC (“Dee-Fack”). The DFAC was for the soldiers and certain (generally American) contractors or muckity-mucks at foreign contractors. As I’m American, I was able to secure a DFAC pass. I was also able to sweet-talk my way into getting one for Handan, as she was my wife (they didn’t want to give her one at first because she’s Turkish). The only others in our camp who had them were the folks working for the American company we were joint-ventured with, our Turkish project manager and a few other Turks in management positions within our company. Everyone else only had the option of eating at the canteen within our camp. Our canteen was run by Turks and staffed by Afghans. The meals were primarily Turkish and occasionally Afghan. They were always excellent. Handan and I split our time between our canteen and the DFAC. Certainly, the healthier food was served at our camp. All the food there was fresh. The meat was slaughtered on-site. The vegetables were locally grown. The bread was baked right in our camp all day long. You’ve never tasted pomegranate until you’ve tasted an Afghan pomegranate. Did you know that they are actually quite sweet, with huge seeds that sparkle like rubies? Until I ate my first Afghan-grown pomegranate, I thought they were supposed to be sour-sweet, like every one I’ve ever eaten in the States. I never really enjoyed one until Afghanistan. And almonds! Don’t get me started! Have you ever noticed how things that are “almond-flavored” don’t really taste much like that bag of California almonds sitting on your counter? Afghan almonds taste like how we’ve been led to believe almonds should taste! I could go into an epic rant here about small-scale, natural farming versus mega-industrialized farming and the effects on flavor…but I won’t.

The DFAC, on the other hand, was no different than an American school cafeteria. It was large-scale food service at its finest. There were lots of deep-fried offerings, and all the usual fare you may remember from your school years. There was also ice cream, cake and cookies and all the other garbage we Americans love to cram down our necks as we waddle ever closer to being a nation of Diabetics. Those who ate primarily at the DFAC tended to put on weight, with the exception of the soldiers who went out on patrol and saw combat. The other type of soldier was easy to identify. Though not a soldier, I include myself in the latter category. After a while, I needed to cut back on the twice-daily ice cream bowls. Because the DFAC was well-stocked with sugary goodies, those of us who ate there were in high demand among the Turks who weren’t allowed. We often filled small orders for sweets for those who needed a fix. The Afghan workers saw even less of this bounty. I tried to keep a pocket full of sweet stuff to hand out to the workers when I could. There is no way I could hook them all up – there were just too many – but I could occasionally brighten the day of a select few.

I want to end this post with a story about a conversation I heard one night while waiting in line to get into the DFAC. I will preface this story by saying that this blog will never be political. My beliefs and Handan’s beliefs will always remain our own. However, I will make this one statement about our soldiers: we support them 100%. No matter the war. No matter the president. No matter the outcome. Those men and women did not start the war. Many of them did not choose to be there. Those that did choose, did so just as we did: because it is a job. And these are kids – kids faced with something most of us will never know and could never understand.

I stood in line at the DFAC with my new friend and co-worker, Benny. This was September 11, 2010, nine years to the day after the attacks that brought us to this place but only four days after our arrival. Two soldiers stood in front of us. Young men. Boys, really. Young twenties. I think back to myself at that age: self-absorbed, self-important and totally ignorant about the real world. These soldiers were everything I was not at their age. One of them had blond hair, cut short. The other had dark hair. The blond soldier spoke to his friend, his voice soft and kind, “They’re serving spaghetti tonight.” He smiled. “Spaghetti is my favorite.”

A moment later he added, “I think this may be my last time having it though.”

My friend Benny looked at the soldier, saw how fit he was and joked,”What, are you going on a diet?” He chuckled.

The soldier looked at us, smiled and shook his head. “No.” He said with a small laugh. “But I’ve been going out on patrol every night. Things have been getting worse. There are so many IEDs now. I think that every night will be my last.”

He turned back to his friend and walked up to the serving line to get his spaghetti.

That conversation haunts me to this day.