Handan and I made our preparations to leave Turkey and travel to Afghanistan. We didn’t need much – just a suitcase each. We were heading into a war zone and would be living on the outskirts of a military base, so there wasn’t much room for creature comforts beyond a few changes of clothing and some personal items. Heading into a war zone. I was still trying to make sense of that. Most rational beings not under direct orders from their government would make every attempt to head away from a war zone. My mind spun with a thousand probabilities. Compared to me, Handan was serene. This move wasn’t as big a deal to her. Afghanistan is relatively close to Turkey, separated only by Iran. Turks and Afghans, though quite different in their affairs now, share a Central Asian ancestry. And this war, ever-present in the minds of Americans who had been force-fed anti-terror propaganda for the past ten years, just wasn’t a part of the social consciousness in Turkey like it was in America. I tamped down my fears, grabbed a suitcase in one hand and Handan’s hand in the other and headed out of Izmir and into the unknown.

From Izmir, we flew to Istanbul and secured lodging for the night very close to the airport. The next day would be a doozy. From Istanbul, early the next morning, we flew to Turkey’s capitol, Ankara, where we needed to sign employment contracts for our new company. Contracts signed, we turned right around and headed back to the airport to catch a flight back to Istanbul. In Istanbul we had a brief layover, and then we flew to Dubai. We landed in Dubai at 2:30 am. Our flight to Afghanistan wouldn’t leave until 8:00 am, so we had some time to kill. 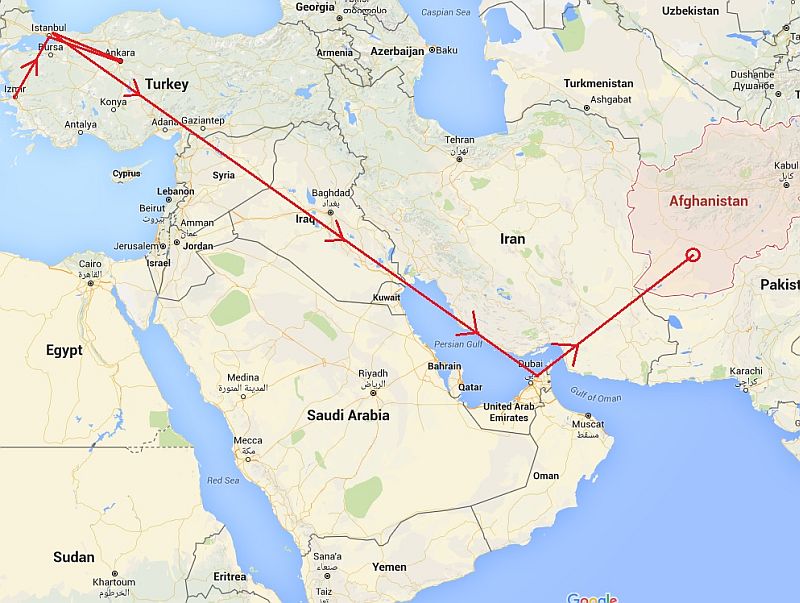 Dubai International Airport is a marvel. Shiny and new with shops and bars open 24 hours, it is a traveler’s dream. We had a 5 1/2 hour layover, so I thanked my lucky stars that an airport in a Muslim country not only served booze, but that I could order that booze at any hour should the need arise. The need arose. Here is my first photo of our Afghanistan journey: a frosty Guinness served by an Indian barkeep in an “Irish” pub in Dubai International Airport. The time was 4:30 am, September 5, 2010. 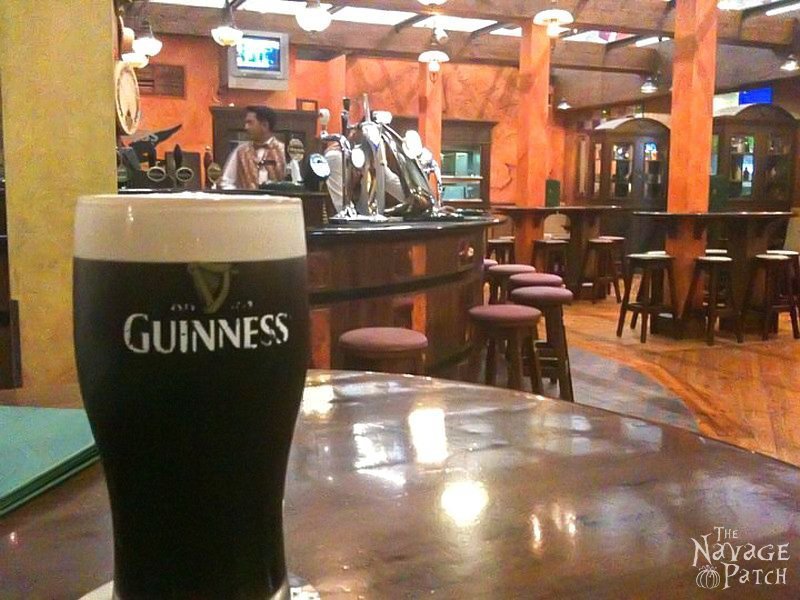 We would be flying on a private charter directly into Camp Bastion. This was a British base connected to Camp Leatherneck, an American base. The airstrip was in Bastion, and since we were going to be part of the effort to build new aprons and hangars off of the runway, we would be living in Camp Bastion. There was only one flight per day from Dubai to Bastion, departing at 8:00 am. There was a special corner of the airport reserved for these risky regional flights – most of them private charters. They flew to various bases in Afghanistan, Iraq and any other dusty place America had set up shop. There were also flights to Tehran (Iran), Accra (Ghana), Kabul, Mosul (Iraq), Sana’a (Yemen), Djibouti, Beirut (Lebanon), et cetera. This part of the airport was far-removed from the gates serving glamorous destinations. It was down an escalator and cordoned off from the rest of the airport. Where the gates upstairs may have been filled with well-heeled local men in clean white dish-dashas, wives in black abayas (adorned with layers of gold jewelry) and Westerners in business suits or other fashionable garb, the gates downstairs were filled with men, and only men (except for Handan), dressed in rumpled robes and reeking of sweat and stale smoke. The Westerners were generally dressed in one of two ways:

Since we would be flying directly into a military base, we would not be needing visa stamps on our passports. This meant that we would not be able travel off the base, except by military or charter plane, and then only to another base or out of the country. The flight was surreal. We sat in our seats on a rickety old DC-10 as we crossed the Persian Gulf, flew over Iran and into Afghan airspace. When we neared the base in southern Afghanistan, the plane went into a steep and rapid descent towards the runway. This was done to spend as little time as possible in the danger zone where the plane would be vulnerable to attack from shoulder-fired missiles. We landed at Bastion airfield, and a US Marine boarded the flight to explain the ins and outs and dos and don’ts of the base. Each passenger gave their name to the soldier and showed identification. The soldier found the name on the clipboard she carried and discharged the man from the plane to a queue on the apron. Except for me. She couldn’t find me on her list. Handan was already off the plane ahead of me, but I was instructed to wait in the front seat until all the other men had deplaned. This was one of those moments in life where you know you haven’t done anything wrong, but you’re terrified nonetheless. Why wasn’t my name on the damn list? And what did it mean? Would I be whisked off base on the next flight? What would Handan do? When the last man was off the plane, the soldier turned her attention to me. Again, she asked for my name, so she could search for it once more. I offered to help. I glanced down the clipboard, and to my relief, I discovered the error. My full name is Gregory Conrad Navage, but somehow I had been listed as Conrad, Gregory on the list. This wouldn’t be the last time my name was mangled in Afghanistan and in other countries. It seems that when officials encountered more names than space allowed, they usually just tossed “Navage” to the garbage heap and carried on with “Gregory” and “Conrad,” figuring, “meh, it’s close enough.” Still, it took a bit of convincing and a few radioed messages back to HQ before they were comfortable that I belonged there. I stepped off the plane and descended the stairs under the searing Afghan sun.