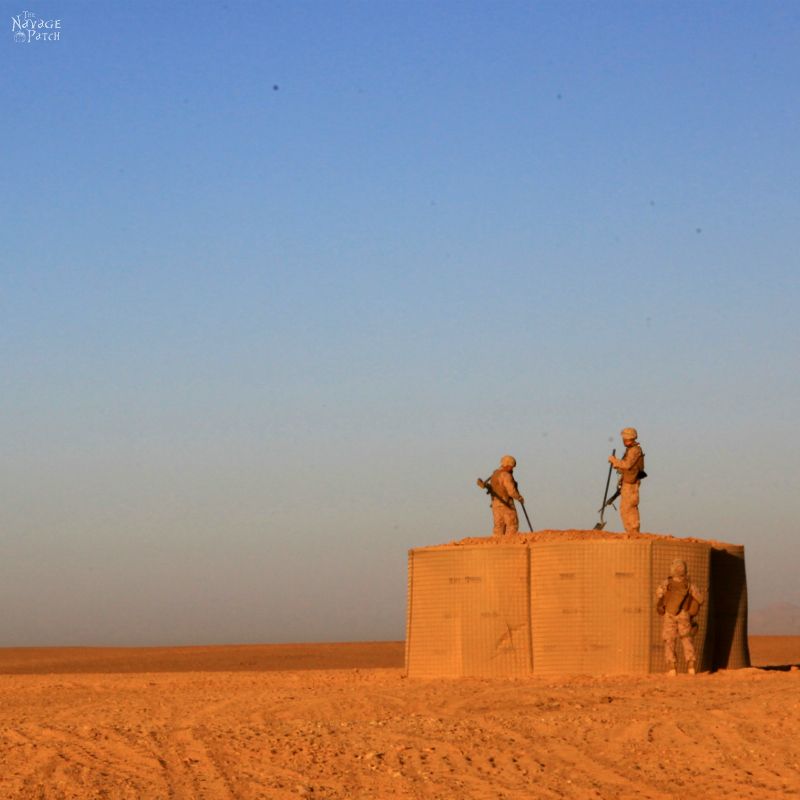 I mentioned in the first Afghanistan post that I didn’t have a visa to be in the country legally. Provided I stayed on base, this wouldn’t have posed a problem, and in our preparation and planning, I never thought a situation would arise that would require me to leave the base. As usual, I was wrong. See those three containers glowing in the afternoon sun? Those buildings housed workers for a subcontractor of our company who worked at the “crush plant.” They spent their days turning rock into sand and gravel which we used to make concrete. Those three buildings and the job site (not pictured) fell under the purview of the health and safety department, aka, me.

Now. See the double fence-line closer to me? That was the perimeter fence for the base. Inside, where I stood, was sovereign territory of the UK and US. Outside was the sovereign land of Afghanistan. It was against Afghan law for me to set foot outside the base without a visa. But my job required me to check on the welfare of those Turks and Afghans working out there. I probably could have gotten out of it if I raised a stink. There were others who worked in our department who could have gone instead of me. And I had told Handan (promised, I think) that I would never leave the base. So why did I say yes? Just a few weeks prior, I railed against the idea of setting foot on a secure military base in Afghanistan, and yet there I was, willing to risk life and freedom to check on some local rock-breakers!

I sat in the passenger seat as my boss, Gerhard, drove us to the checkpoint. He parked our vehicle, an aging white Toyota 4Runner, and we got out. We opened the doors and the back hatch and waited. A soldier approached, and Gerhard said hello and started some small talk. I listened to the lilt of his South African accent. He’d been in Afghanistan for quite some time. Nothing fazed him. The soldier circled the SUV, peeking inside, though it was clear that she knew Gerhard and didn’t expect to find anything unusual. Satisfied, she opened the gate. We climbed back into the vehicle and drove through. Just past the gate was an open area where a few Afghans on motorbikes were parked. Other men stood near parked dump trucks, smoking and talking on their phones. Behind us, flanking the gate, were soldiers in small raised bunkers. They watched the activity, rifles at the ready.

“Take off your hard hat and vest.” Gerhard said.

“We don’t want to look like we’re working for the Americans. We’re not protected out here.” He said.

I removed my hat and vest and put them in the footwell, thinking about the company logo emblazoned on both doors of the SUV.

We drove away from the base’s entrance and onto a dirt road. This was in fact a major thoroughfare and shortcut for those traveling between the city of Lashkar Gah to our south and Afghanistan’s ring road to our north. Among those who spoke English, it had another name: The Taliban Highway.

The road was not maintained. There were areas of washboard and areas of deep fine sand. As we drove, I saw that much of the road ahead was covered in mud. We approached and slowed. A minivan was trapped in the bog. I wondered about the water in the middle of this vast and arid place. There must have been an underground spring that fed water onto the road and caused these mud pits. Gerhard parked in front of the the minivan. It had been traveling towards us. He got out and went to the back to fetch some rope. I got out and walked to the minivan. This is great! There we were, out in the actual country, and I was about to do some good for the locals! I was swollen with pride and stupidity. This is what it’s all about! Helping. Giving back. Doing the right thing! I saw a weathered Afghan man sitting behind the wheel, his face bearing the heavy lines and creases of a life spent outdoors. Another like him sat in the passenger seat. The side door of the van slid open. Ah, the family! They are going to be so thankful! There I was, a naive American babe, wet behind the ears and out to save the world. I peered into the dark interior. The front row was occupied by a wrinkled old woman, covered in black, save for her face. Just like the pictures in National Geographic! It was sixth grade social studies come to life. Next to her sat another woman, less wrinkled. Her daughter? Had to be. The daughter held a small boy, his eyes wide and curious. Three generations all traveling together. I was giddy. I smiled at them. I beamed at them! I put my hands together and did a little bow, like some hindu yogi saying namaste to his class.

I looked to the back row. Men. Dirty white robes. They stared at me, eyes wary, lips pressed thin. Something in their hands? I glanced back to the women. The smile fell from my face. Their eyes were hatred and death. I backed away to help Gerhard with the tow.

We pulled them free of the mud: vicious stuff made when water mixes with the ultra-fine desert dust. It was a constant hassle for the travelers of that road. I turned again towards the van to offer a final wave. I hoped they would see what a good job we did. I hoped they would understand how much I wanted to help. The side door slammed shut, and they drove off towards Lashkar Gah.

I stowed the tow rope in the back and climbed into the passenger seat. Gerhard put the 4Runner in gear and drove away. He turned off from the road and drove towards the crush plant by the perimeter fence, as I sat wondering why the Afghans we helped weren’t the least bit thankful.

We pulled into the crush plant, past Afghan guards with AK-47s. I looked around at great noisy machines crushing tons of rock. I saw long conveyor belts moving gravel and sand this way and that, dumping their endless cargo into ever-growing piles. And there, running along the ground under the crusher, a stream of water. The water was pumped into the crusher to help minimize dust. It drained through the machine and pooled underneath it. Gravity took over and the water made its slow, inexorable way towards the busy dirt road.

Gerhard put the car in park and looked over at me.

“Those people back there, the men in back…I think they were Taliban.”