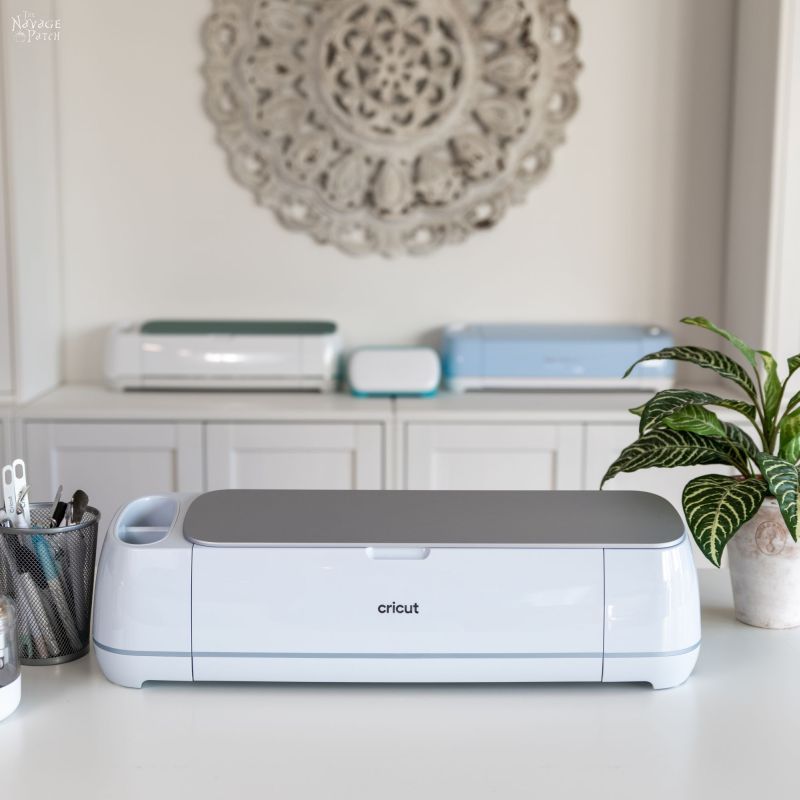 Cricut Maker 3 is the new, next-generation smart cutting machine in the Cricut cutting ecosystem. Let’s have a look at what it is and what it does!

You know, I’m getting a little tired of saying, “The Big Brains at Cricut have done it again!”

But they’ve gone and done it, and now I’m here saying it.

It’s been almost four years since Cricut shook up the smart cutting game with its revolutionary Cricut Maker, a brilliant machine that is still going strong today. But as all companies must do, Cricut began planning for its successor years ago.

Taking advantage of faster and more powerful servo motors and a host of other technological improvements since the launch of Maker in August of 2017, Cricut has developed an incredibly power machine in Maker 3 – one that is faster than its predecessor and can cut in ways the Maker simply cannot.

This is Cricut Maker 3, and it is a force to be reckoned with.

This is a sponsored conversation written by me on behalf of Cricut. The opinions and text are all mine.

Wait, what about Cricut Maker 2??

You mean you don’t remember??

Nah, I’m kidding you. There is no Maker 2. Never was, never will be. They skipped a number to keep the nomenclature consistent between Maker 3 and Explore 3. They’ve also dropped the “Air” from the Explore series.

From now on, I expect we will see the two machines upgraded on similar timelines.

Okay, so what are the differences?

In a nutshell, the key differences are speed, matless cutting and cut length. Let’s take a closer look at these and some other differences.

Everybody wants faster these days, and the same goes for smart cutting machines. Every minute you sit waiting for your cut to finish is a minute not spent crafting! With its upgraded motors, Cricut Maker 3 can cut up to twice as fast as Maker with up to ten times the cutting force.

These Smart Materials have been designed to be used without a cutting mat. Yep, kiss those suckers goodbye! (Well, no, don’t do that – you’ll still need them for certain cuts.)

But here’s the best part about Smart Materials. Because you’re no longer tied to a cutting mat, you can make really long cuts!

How long can I cut with Maker 3?

That depends on the material. With Smart Iron-On, you can cut a single image that is 11.7 inches wide by 4 feet long. With a repeating image, you can go even longer!

With Smart Vinyl, you can cut a single image that is 11.7 inches wide and 12 feet long! Oh, the possibilities!

What is Smart Paper?

Smart Paper is an adhesive-backed paper that you can cut without a mat, then just peel and stick. It’s like Cricut is trying to make crafting easier or something. Weirdos!

Because you can make really long cuts with Smart Materials, Cricut will be offering rolls in 3 feet, 9 feet, 12 feet, 21 feet and 75 feet.

To hold those rolls (over 4 feet) and keep things running smoothly, Cricut will be selling the Roll Holder accessory.

The Roll Holder has a built-in trimmer that makes it a cinch to get a clean and straight edge after every cut.

The Maker 3 has a new intuitive control interface which introduces the universally-acknowledged “play” triangle for starting cuts.

Okay, so what’s staying the same?

Both Maker and Maker 3 work with the same suite of 13 tools for cutting, writing, scoring, and other professional-level effects.

Material compatibility (not including Smart Materials)

Maker and Maker 3 can both cut over 300 materials including fabric, balsa wood, leather, and chipboard.

Both Maker and Maker 3 support print and cut capability on white and colored materials.

What happened to Fast Mode?

Fast Mode on Maker allows you to cut up to twice as fast with certain cuts – namely the less complicated ones. Since Maker 3 cuts twice as fast even on the intricate cuts when using Smart Materials, there was no longer a need for Fast Mode, so Cricut retired it for the new materials. However, Fast Mode will still be an option when cutting materials on a mat.

What does Maker 3 come with?

In the box you’ll find:

In the box you won’t find:

Hey, what are they going to do with the original Cricut Maker?

Rumor has it they’ll be retrofitting it with a heating element and rebranding it as the Cricut Grilled Cheese Maker. No word yet on pricing.

For now, Cricut will continue to sell the Maker at a lower price point. I’m sure it will take some time for them to work through their inventory. My guess is that it will be phased out at some point in the future, but I don’t think it’ll be anytime soon.

I’m so angry, I just bought a Maker!

I understand the frustration, but the Maker and its ecosystem aren’t going anywhere anytime soon. Just as Apple releases a new phone just about every year, it was inevitable that Cricut would continue to innovate and release a new Maker. I know some people are angry that Cricut didn’t announce beforehand that they were developing the Maker 3, but it would have been a really bad business decision if they had. Products like these rely heavily on Intellectual Property (IP), and the smallest IP leak can be disastrous if a competitor gets the info and beats them to market with a competing product.

I look at it this way: if I had just bought a Maker before the Maker 3 was released, I’d know that I’d be first in line for the Maker 4. But if I’d bought a Maker 3, I probably wouldn’t get a Maker 4.

How much will Cricut Maker 3 cost?

When and where can I buy a Maker 3?

Handan and I have been busy putting our Cricut Maker 3 through its paces. We really love the ability to make long cuts, and we put it to good use for our DIY Indian Bone Inlay Cabinet.

Cutting those long stencils was a breeze with Maker 3!

We’re working on an amazing project as I write this – it’ll be another long-cut project using the Maker 3, and we think you’re going to love it!