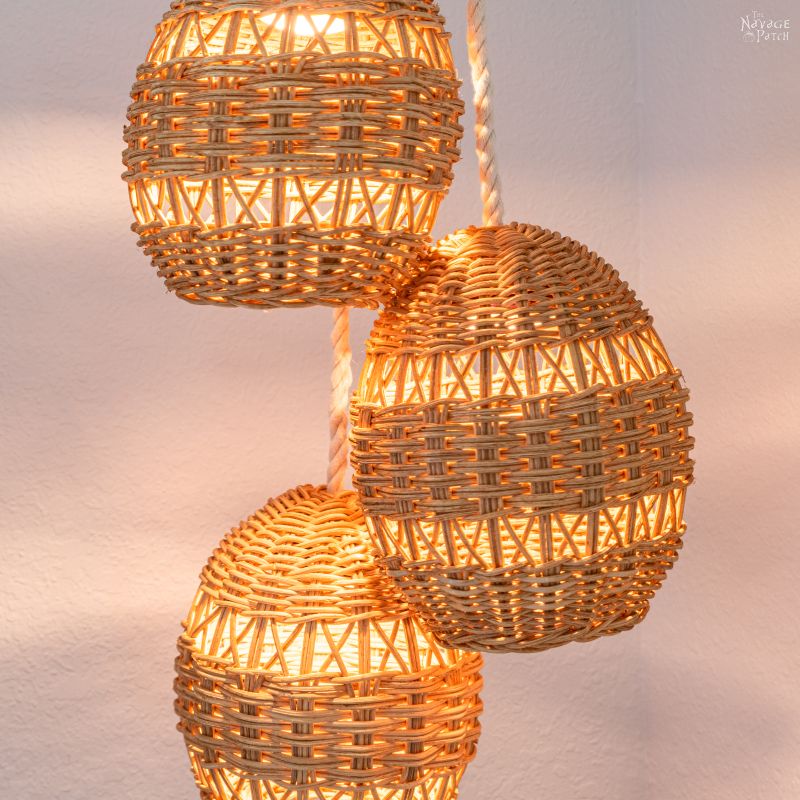 Learn how to make a DIY pendant light with no wires and no electricity needed! This rattan pendant light is remote-controlled and color-changing!

Good ideas build upon themselves like a snowball rolling down a hill.

At a recent trip to Target, Handan found some Threshold “woven egg decor” on one of the clearance shelves.

They were marked down to half their original price. Figuring 1) we could probably make something from them and 2) we surely don’t have enough woven rattan doodads (o_0), she bought two of them.

Who buys two of something for decor? The world of art and decor operates on the Rule of Odds!

She showed me the eggs, and I asked if there were more of them in the store. She said there were. Well then why did she only buy two, I asked. She didn’t know, she said. She thought two would work for…something. Let’s chalk it up to a brain fart, or to be more delicate, a brain leak.

I told her I’d go out the next morning and find some more. She described in great detail where in the Destin, FL Target I could find the rest of the woven eggs. What I heard was blah blah blah clearance shelf blah blah blah.

Whatever. How hard could it be to find a shelf full of rattan eggs on clearance?

Very hard, apparently – at least when the directions to their exact location went in one ear and out the other.

The Rule of Odds

The Rule of Odds has been around for centuries (if not longer), and it is a cornerstone of art and photography composition. Since interior design and home decor borrows heavily from the fine arts, it has become a common practice among professionals and DIYers alike. Why are we more drawn to threes than twos of fours? What is it about odd numbers that satisfies so much more than even ones? Whatever the reason, the Rule of Odds is one to follow when setting up a room or a vignette. We even subconsciously use it at the dinner table with our protein, vegetable and starch! 😀

After scouring the store from stem to stern, I Facetimed my babes to get to the bottom of this pickle. In my expert opinion on such matters, someone must have bought the remaining eggs the day before.

I dialed. She answered. I turned the phone so she could see what I was looking at. Like a seasoned mariner in a familiar stretch of sea, she started issuing commands. Go straight, turn right, walk forward, stop. Look to your right.

And there they were. Three woven eggs on a shelf clearly marked “CLEARANCE!” Huh, they must have restocked when I called my babes.

There was an older woman pushing a cart nearby who was having a great laugh watching the bald-legged doofus being led around the store by a woman’s face on his phone. Hey, I’m always here to please and entertain – on the blog or live in person!

Anyway, I snatched up the remaining woven eggs and made a beeline for the door.

That night, we put our heads together and hatched a plan for the eggs.

We’d make a DIY pendant light – pendant lights, to be more precise. Though one light would satisfy the Rule of Odds, three would look even better.

Pendant lights are one of the most fun DIY projects, because you can use so many different materials and objects for the pendant! Don’t worry if you can’t find the same woven eggs that we used – any woven basket will do! And because we’re using battery power that doesn’t generate any heat for this ceiling light, you can use delicate fabrics, leather, cardboard, paper, or any other materials that tickle your fancy!

As Handan puzzled over how to run electricity to them from a wall socket, I said, “Electricity?” We don’t need no steenking electricity!”

Her original idea for a DIY pendant light in his room – the one I discussed in my young adult bedroom makeover post – was to be made from a straw hat and be battery-operated.

She beamed at me, and even though it was originally her idea, I got to enjoy the moment of reminding her.

This pendant light fixture can be hardwired from the ceiling and run on electricity using traditional light bulbs. If you have the wiring already in place, you can make this same design and have it light up in the traditional manner. If you prefer, you can also run a cord along the ceiling, down a wall and into an electrical outlet. This was how Handan was originally thinking of approaching this project. But for us, the cordless, wire-free approach is best, since this hanging light is meant to be an accent piece, and it won’t be used as much as a traditional pendant lamp that might hang in someone’s kitchen or over a dining table.

I then further dazzled her with my pulsating brain of pure excellence when I saw she was struggling to find a way to keep the puck light in the pendant. They’re battery-operated, and thus will need to be removed, opened and re-stocked with fresh batteries from time to time. I don’t know what it was about that day, but I not only had one, but TWO good ideas. I’ll fill you in on my solution when we get to that point in the tutorial.

I was rolling in good ideas, and I was liking it!

Okay, we had a plan. It was time to make it a reality.

How to Make a DIY Pendant Light with no Wires

The rope we got from Dollar Tree is 11 feet long, and we needed two of them for our DIY pendant lights. I cut each rope into 5 1/2-foot lengths, then set aside one of them, as I only needed three lengths.

I knotted one end of my three lengths of rope. This knot will eventually be glued to the puck light.

Step 3 – Cut a hole to hang the pendant

I needed to cut a hole big enough to accommodate the 1/2 inch rope.

I used an X-Acto knife for this – it cuts through the rattan cleanly and easily.

Step 4 – Thread the rope through

Thread the non-knotted end of the rope up through the hole from inside the bowl of the pendant.

The Dollar Tree rope comes with both ends wrapped in plastic. This prevents them from fraying. It also makes them easy to thread through the hole I cut in the pendant basket. If you are cutting lengths of rope from a larger spool, simply wrap the rope a few times where you intend to cut with scotch tape and then cut through the middle of the wrap. Presto! You have two neat and unfrayed ends! Your job will be much easier when it comes time to thread the rope through the hole in the rattan!

I pulled most of the slack through the pendant until the knotted end was sticking just below the opening.

Now, remember my other great idea I told you about in the beginning of the post? Well this was it – gluing the rope to the battery cover of the puck light. For some reason, Handan was overthinking how to seat the puck light inside the lamp but still have it removable to swap batteries. She’s an engineer, and engineers sometimes overthink things.

Me? I’ve never suffered from overthinking. “My babes,” I said, as she mumbled to herself in the kitchen trying to solve this conundrum, “Like this.” I grabbed the rope and pressed it against the battery cover. “See? The pendant will hang from the puck, but we can still pull it out to change the batteries. Simple!”

Score one for the man with the little brain!

Before gluing the rope to the puck light, I trimmed the frayed ends of the knot.

I then squeezed a big glop of hot glue all over the knot.

Then I pressed the knot onto the back of the puck light.

I held the rope in place until the glue cooled…

…and then I pulled the rest of the rope from the top of the pendant.

A little test to make sure all is working…

Baris is going to love that these puck lights can change colors!

One more test with the lights out!

Depending on what you started with – maybe your baskets are a weird color – you may decide to spray paint them. If so, I think an aged brass or muted gold would work well, especially if sprayed on the inside for a beautiful warm glow.

We’ve basically got a rattan warehouse, so it wasn’t hard for my babes to find a suitable piece to serve as a ceiling plate. We opened a hole in the center of the small wicker plate and ran the three lengths of rope through the hole. We then adjusted how low each pendant would hang. When we were happy with the setup, we cut the excess rope from the top of the mounting plate. To secure the plate to the ceiling, I used two screws with corresponding drywall anchors.

To make sure the screw heads didn’t slip through the rattan weave, I used washers with the screws. This is way more than enough to hold up these DIY pendant lights. In person, from the floor, you don’t notice those screws at all unless you’re specifically looking for them.

You don’t have to take this route. If you want a simpler hanging solution, you could screw a hook into the ceiling, knot the three lengths of rope together at their ends and slide that knot over the hook. Whatever works for you!

Let’s have a look at how they turned out.

I think they look fantastic in Baris’s room, and he really loves the fact that he can change colors on demand…

…or have the pendant lights smoothly cycle through them.

This was such an easy project, but what a payoff!

And in case you’re interested, you can find a tutorial for the vertical chess board here.

If you try this DIY project, be sure to take a picture and post it on Instagram! Don’t forget to tag us @TheNavagePatch! We love to see our DIY projects out in the wild!