It was 8pm on our first Monday in Vietnam, and Handan and I left our beautiful, empty villa to go buy housewares and food. We knew that there was a store somewhere in District 2 (where we were living) called Metro, and that this store sold everything we would need. Metro was like a Costco or Sam’s Club or BJ’s Warehouse here in the states: it was huge, sold everything from live shrimp to mattresses, and was members only. Fortunately, one of Handan’s coworkers, a woman named Viet, gave Handan her Metro card for us to use while we got settled.

Handan and I walked through the streets of our villa complex until we reached the main road, Lương Định Của (pronounced “Lung Dun COO-ah”). Lương Định Của, the road, was named after Lương Định Của, the man, an agronomist in the mid 20th century who developed new varieties of rice and silk and many other fruits and vegetables through his experiments in genetic breeding. There was a small guard shack where the villa road met the main road. A lone guard sat reading a paper. The boom gate was secured in the up position. It was only closed after midnight, when access to the neighborhood was more closely monitored. This was common in Saigon neighborhoods, and was not only for luxury villas and mansions. We approached the guard and smiled.

“Taxi?” I said, hoping he would understand the word.

He did and flagged the next available cab that passed our way. We smiled again and thanked him, using the only Vietnamese we knew at that point, “cám ơn” (first word rhymes with “Tom,” second word rhymes with “phone”).

We got in the taxi and said the only word we hoped he would need, “Metro.” He nodded his head and drove.

As it turned out, Metro was less than a mile from our villa. We got out of the cab, paid the driver and walked into the bustling Metro Mega Mart. Handan and I each grabbed a cart and split up to shop more efficiently. I went for the food and kitchen accessories, and she went for the bedding and bath supplies. 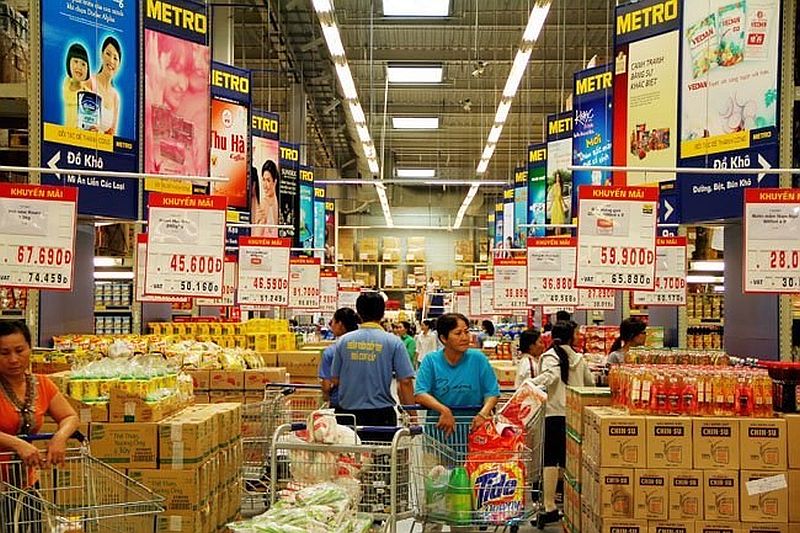 I loved shopping at Metro. There was always so much to see, and much of it was amusing. Okay, picture one of America’s superstores (Costco, BJ’s, Walmart, etc), and picture, say, the cereal aisle. Can you see the long row, stacked high with a hundred brands of colorful and crunchy breakfast fuel? Now replace those cereal boxes with boxes of MSG, but supersize the bottom row, because those boxes are 50 pounds each!

In the back of the store, there was a bakery, and next to the bakery was the liquor nook. They sold most of the famous imports, but if you wanted to drink on the cheap, you could buy “Wall Street Blended Spirit,” a harmonious blend of “Real Scotch Whisky” and “Vietnamese Rice Whisky.” At $4 for 750 mL, it was a great bargain and super smooth, to boot. For those more cash-strapped drinkers, $2 would buy a 3-quart plastic jug of locally distilled rotgut (vodka, I think). I never screwed up enough courage to try that one.

Just past the liquor nook was the meat locker. I spent a lot of time in the meat locker, especially when the heat and humidity of the outside world became unbearable. Imagine, if you will, a perfect room, filled with delicious meat and a thermostat set at about 33 degrees Fahrenheit. I would linger over the local pig knuckles and Australian beef tenderloin as my toes turned blue and my fingers went numb. It was bliss. The locals wore coats in the meat room – they were available for all shoppers on the other side of the heavy plastic curtain separating the meat from the heat – but I never used one. For one thing, I don’t think any of them would fit me (at times I felt like Gulliver among the Lilliputians). But mostly, that enormous refrigerator was as close as I’d come to a winter day, and I wanted to savor every moment.

One of the most fun areas of the store was the seafood section. 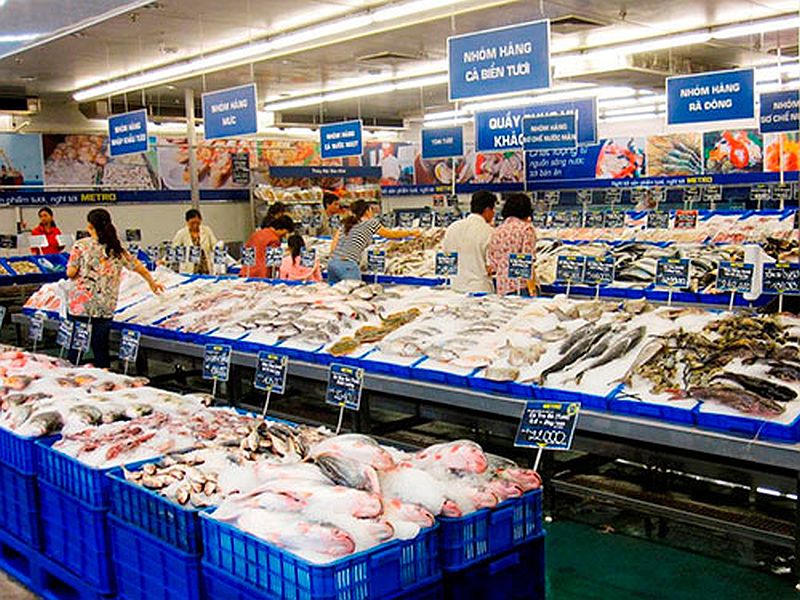 Live, dead, half, whole, frozen, fresh – the seafood section had it all. And the best part was that it was all self serve. You want some giant tiger prawns? Well then, grab a net and start scooping, friend! The shrimp were so much fun to catch. If you had a rambunctious lot, they’d be flipping all over the place, and several of them would invariably jump out of the tank and onto the floor. Then came the fun part of chasing them around the wet concrete floor and trying to scoop them up with your hands.

Shellfish was always a crapshoot. They were live and piled high over ice. But there were always dead ones and rotten ones hidden among the live ones. You could never tell which was which. I remember the first time I brought home a bag of clams and cooked them up. There were a few rotten ones, and wow, did they stink things up! I learned after that to submerge the whole lot in water and wash and smell each one individually before cooking. It took some time, but it was better than the horrid stink of rotten shellfish.

Past the seafood section was the produce section, another favorite haunt of mine. 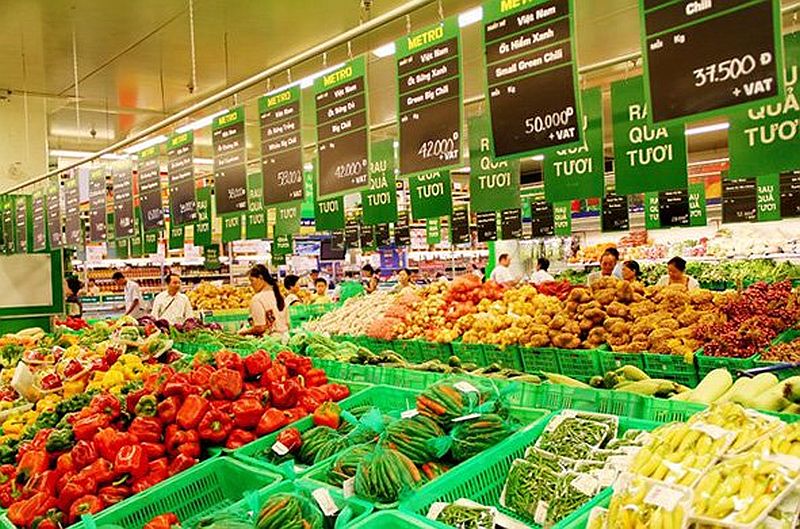 Though the prices were dirt cheap by western standards, Metro produce was out of reach for many locals, who preferred shopping at roadside produce stands and open-air markets. After a time, I started to shop in the open-air markets as well. It was always a noisy adventure, and I loved it.

On that first trip to Metro with Handan, I finished my part of the shopping long before she finished hers. That’s just the nature of how we shop. Maybe it’s a man/woman thing, or maybe it’s just a Greg/Handan thing, but I’m always quick, and she reads every label of every item in the store. It used to drive me nuts (now I just sit in the car while she shops).

As she agonized over this brand or that, and I agonized over standing around like useless chump, the store announced that it would be closing in a few minutes. A few minutes?!? But Handan had only just begun to shop! How dare they! I played up the dire consequences of the store closing while we were still in it to get Handan moving a little faster. We ran through the aisles chucking towels and sheets and soap dispensers into our cart. We flew towards the checkout lanes and found we were the last customers in the store. We started unloading our two carts onto the conveyor belt, and the cashier started ringing our items through. I thought it strange that there were no bags. They were loading our stuff directly into another cart at the end of the belt. I’d never seen that before.

The items flew across the scanner and our total climbed higher and higher. We began to draw a crowd of curious onlookers – other employees who wondered about these foreigners racking up such a huge bill. When the last item was scanned, the cashier swung around the little screen with the total. She was tittering and saying something in Vietnamese to the loitering gawkers. Our total was 31,500,000 Vietnamese Dong (VND), a massive amount of money for the locals. In US Dollars, it came to about $1500. I whistled and opened my wallet to remove my credit card. I heard the cashier’s breath catch. Her eyes went wide as she looked at me and then at the mountain of goods she just rang through. She pointed at my card and shook her head.

Oh, shit. They didn’t take credit cards. It was cash only. Maybe that’s why it was called Metro Cash & Carry?

Panic hit me like a cold, wet mackerel to the face. I looked at Handan, and she was equally dismayed. What the hell were we going to do?

“ATM.” The cashier said, pointing back to the place we entered. “ATM.”

“Oh, thank god! Okay, wait here, my Babes. I’ll be right back!” I ran back to the entrance and noticed the wall of ATMs that I didn’t see on the way in. I picked an international bank and started withdrawing money with Handan’s card. Fortunately, she had her Turkish bank card, otherwise I would have been limited to the paltry $300 that our American bank allowed us each day. The transaction limit for the ATM was 6,500,000 VND, so I had to make five transactions to get the cash we needed to cover our expense. I ran back inside with a huge wad of cash, paid for our goods, and then Handan and I went outside to search for a cab. There were still a few left in the parking lot, waiting for stragglers to leave the store. We didn’t have bags, so we had to load each and every item from the carts into the back of the taxi.

Before we left home, I wrote our address on a business card, since I couldn’t remember how to spell it or say it. That card saved us during those first weeks. We just got in the cab and handed the driver the card. Problem solved.

On the way back to our villa, it started to rain – the driving, windless rain of the tropics. By the time we reached the villa, it was a full monsoon downpour. I jumped out to open our gate, and then the three of us – Handan, our driver and I – ran back and forth in the rain from the taxi to our foyer unloading all of our bedding and kitchen goods and food. We thanked the driver over and over and gave him a tip that was probably ten times what the ride cost, but it was worth it.

We had food, we had bedding, and we were home.