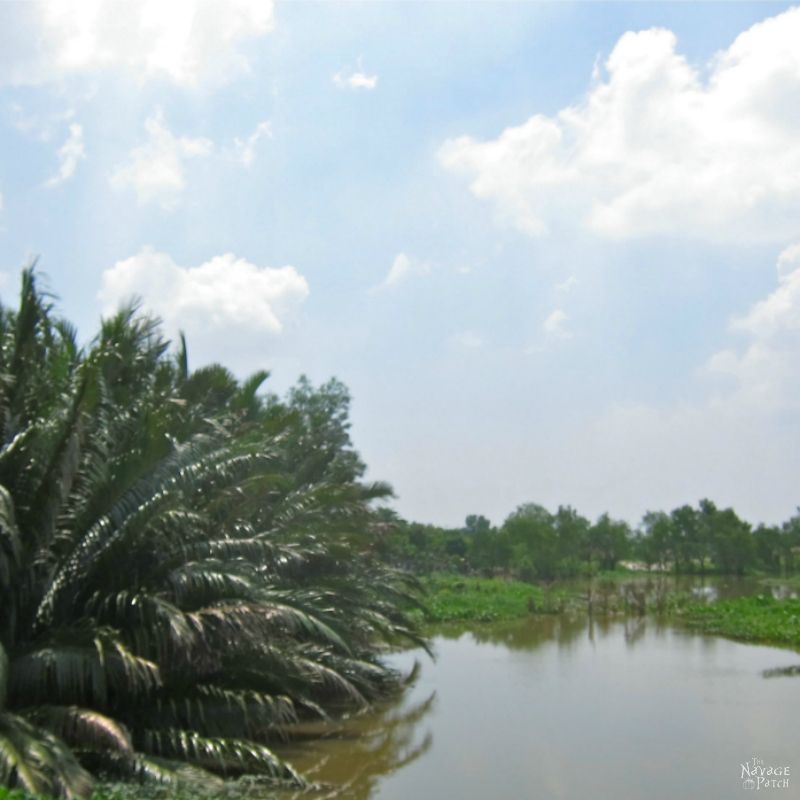 Handan and I arrived in Vietnam on a humid night in early October, 2011. It was the rainy season, and one of the frequent showers had just passed through the region. The air was close and heavy. The street mirrored the headlights and taillights that skimmed through the sheen of water on its surface. We sat in a car with a representative of Handan’s new company, headed towards a hotel in downtown Ho Chi Minh City. A taxi followed with the rest of our luggage. We’d been travelling for over 24 hours, but we were both riding the adrenaline rush that comes from first contact with a new country and a new part of the world. Though we had both lived in Central Asia, neither of us had been to Asia or Southeast Asia, where Vietnam lies. 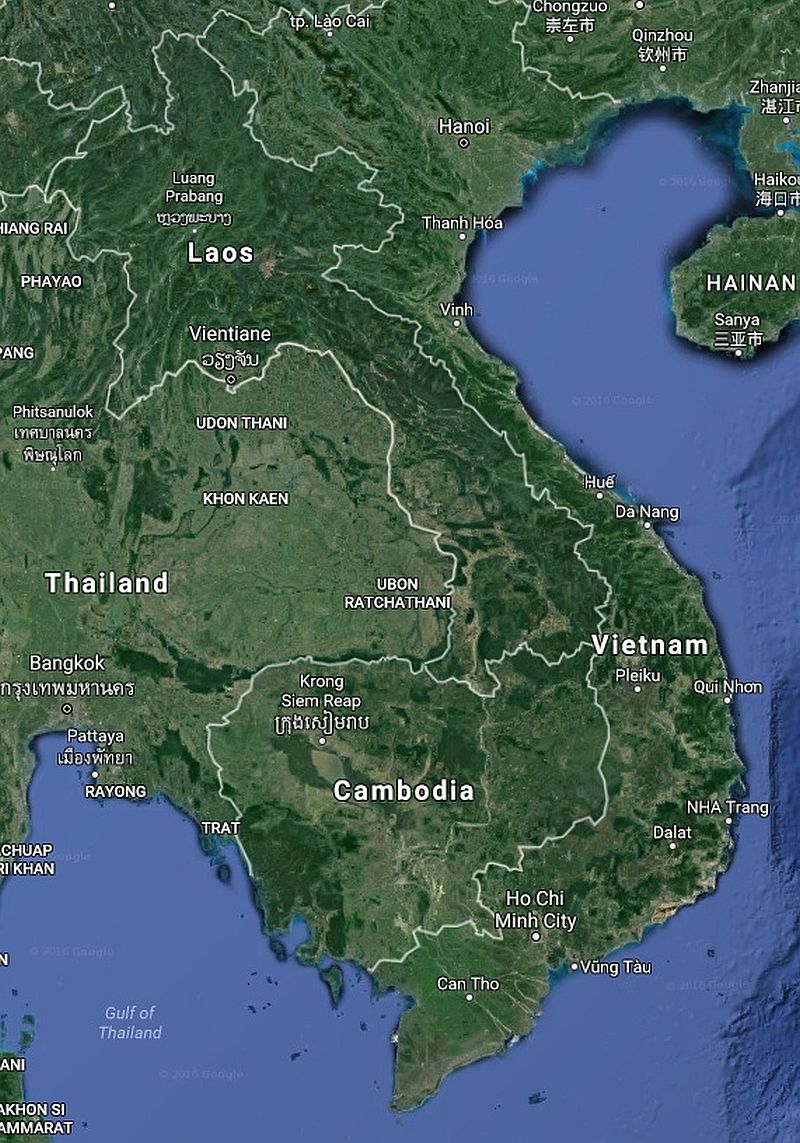 The first thing that struck me about Saigon (officially Ho Chi Minh City since 1976) was the number of scooters. They were everywhere, and they commanded the road!

I couldn’t make sense of those scooters. To my untrained eyes, the roads looked like a colossal accident-about-to-happen. The streets were barely-controlled chaos. We pulled up to our hotel, and I switched my focus from the scooter mayhem to overseeing the unloading of our 10 (maybe more) huge duffel bags and suitcases. After checking in, we headed up to our room. We were staying in the Liberty Saigon Parkview Hotel in District 1. Ho Chi Minh City is divided into 19 Districts, 12 of them numbered and 7 of them named. District 1 is the heart of Saigon, and we were right in the middle of it.

We should have been tired, but this city was bustling, and we wanted to explore. We changed our smelly, travel-worn clothes and hit the streets.

Saigon was totally new and unknown to us. Neither of us knew a thing about where we were or what it had to offer, so we picked a direction and started walking. After a while, we turned onto a different street. We were in a neighborhood with a lot of little bars. There also seemed to be a lot of expats and tourists about. This was where they went at night to carouse. I figured a drink was in order, so we stopped at the next little bar that looked inviting. The one we chose was called Tree Bar, since it used to have a tree growing into it. Tree Bar would become “our bar” for the nine months we lived in Vietnam. 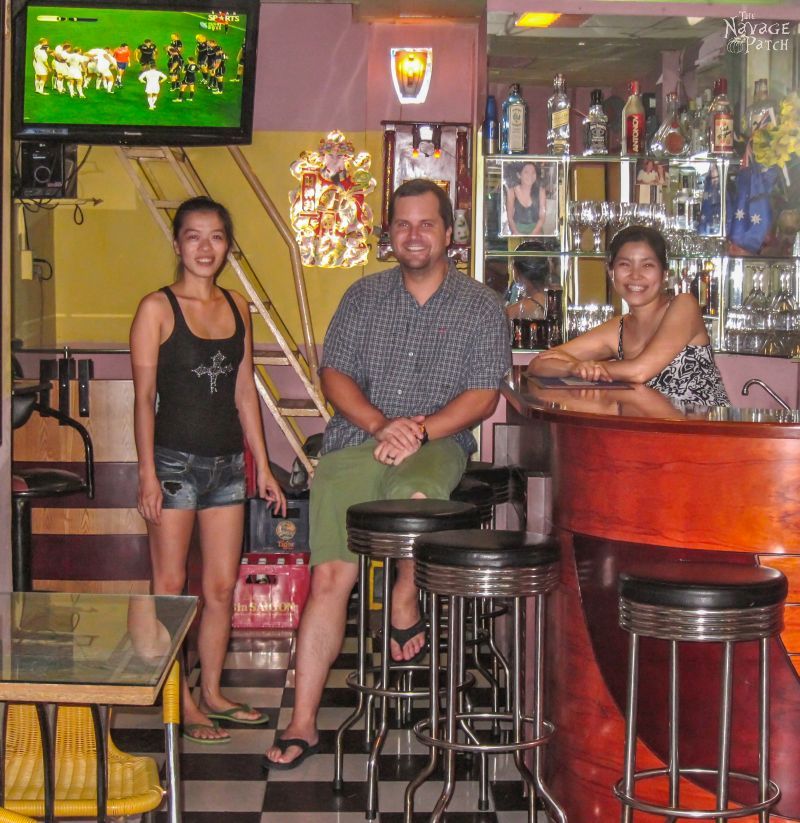 Tree Bar was tiny. Inside, it had five bar stools and one small table for two. Outside, it had two more tables for two. It was run by the two women in the photo above. The family that owned the building lived upstairs. That steep metal staircase behind me led to the house upstairs. That was the only entrance to the house. When the owners needed to come and go, they walked through the bar. There was also only one toilet for the entire building. It was at the foot of the stairs. It served both the bar patrons and the family. There was a hose attached to the wall in the bathroom. This was where the family showered. While I’m sure the woman of the house washed herself when the bar was closed, the man had no such modesty. There were many times I saw him descend the stairs wearing only shorts, lock himself in the bathroom, and shower with the hose and a bucket. Having lived in Qatar and Afghanistan, I had already learned not to judge anything I saw in Vietnam by American standards. If the landlord was cool with showering in a crowded bar, I was cool with it, too.

Handan’s company (Hill International) had us booked for a month at the hotel, during which time we were to find a permanent accommodation. Not wanting to live out of duffel bags for a month, we contacted the agent referred by Hill and went house-hunting the next day.

Our agent was a good guy. His English was just passable. Handan couldn’t understand a single word he said, but it was harder for her since English is her second language. I could understand him if I brought my full concentration to bear on the conversation, but even then, I had to mentally fill in some unintelligible gaps with probable words and phrases. Knowing we were expats (duh), he started by taking us to fancy new developments built for expats and rich locals. The first was somewhere in the ass-end of Saigon, so far away, I thought we may actually be in Cambodia. It was beautiful. And empty. That’s the problem with new developments, like where we lived in Qatar: if you’re one of the first tenants, you’re on your own. And this wasn’t just a new building, it was an entirely new neighborhood. So when I say it was empty, I mean the whole surrounding area was deserted. It was creepy, and not what we were looking for as newcomers to that beautiful country. Besides, the price, while fairly reasonable to the Western eye, was ludicrous in local terms.

After the ghost town, our agent showed us two more overpriced places in expat compounds. We weren’t digging any of it. I asked him to take us to a new district and show us something different. He thought for a minute then said he knew just the place. A while later, we found ourselves in District 2. I could see a gleaming facade up ahead. A gorgeous new complex, white and shining. It hugged the Saigon River and thrust into the sky. These were villas and apartments for the glamorous! This was where the bigshot expats got their swagger on! This was the place where Dolce & Gabbana, Hermes and Ralph Lauren reigned supreme!

I asked our agent if he was taking us there, and he nodded his head with gusto.

“Keep driving.” I said. His face fell. He was getting annoyed with us. We didn’t fit the mold.

“Out of curiosity, how much is the rent there?” I said. His answer made me guffaw and snort. I looked at Handan, and we both rolled our eyes and laughed.

“Okay, look.” I said. “Do you have any listings in local neighborhoods? We don’t want to see any more expat housing. We’d rather live where the Vietnamese live.”

“But they don’t speak English. And you don’t speak Vietnamese!” He was becoming apoplectic.

“Don’t worry. We’ll be fine. Do you have anything to show us?”

He looked through the listings on his iPad. “Yes. There is one, but you won’t like. New building, but neighborhood old and bad. It here in District two.”

“Perfect. Take us there.”

We drove past the luxury villas and soon entered a street that looked like it hadn’t been touched since the war. There were piles of rubble where buildings once stood. Vendors hawked fruits from roadside stalls. Shopkeepers squatted on stoops awaiting customers. This was real life. 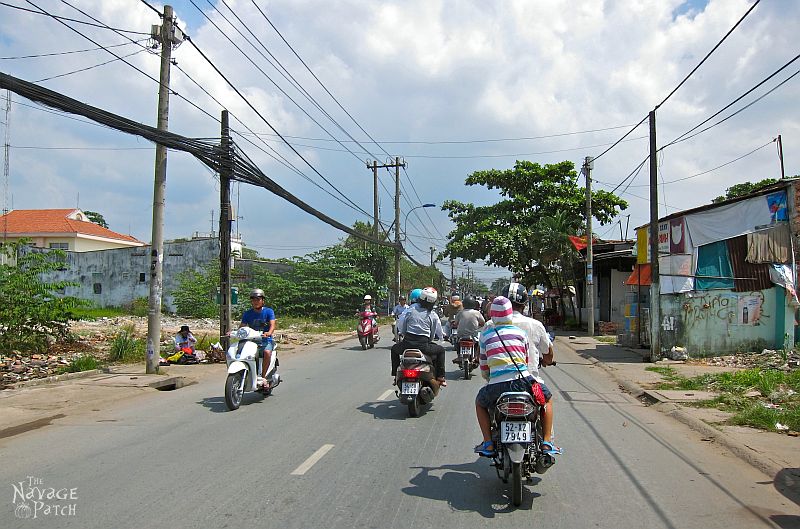 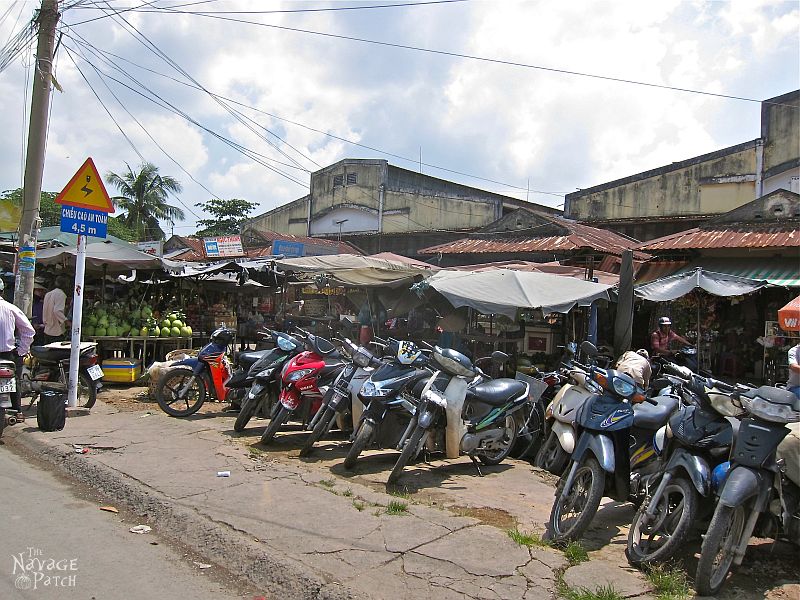 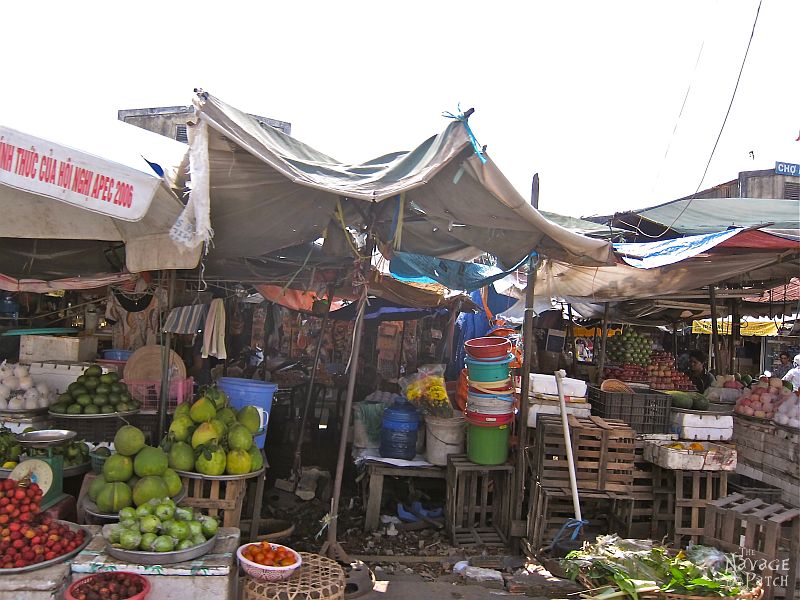 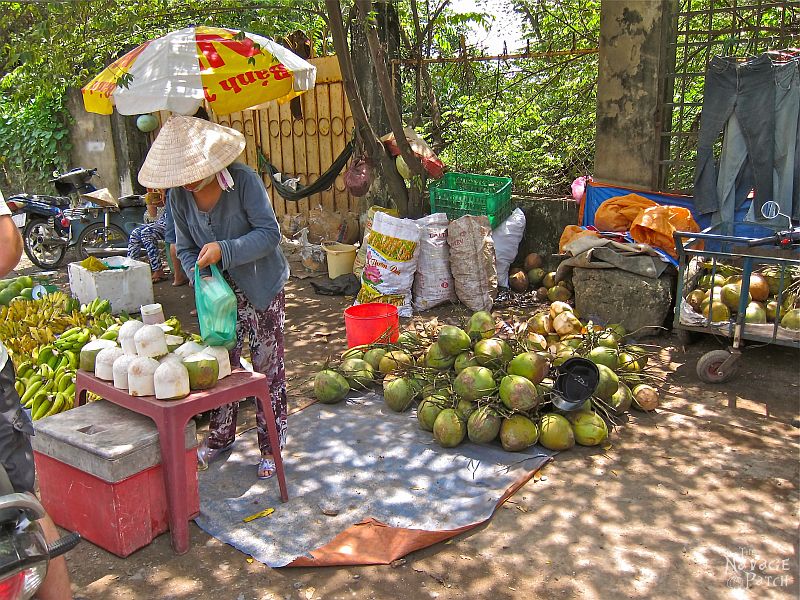 We drove over bridges that crossed small rivers, we drove past wetlands choked with vegetation, we drove past outdoor restaurants and small lumber mills. 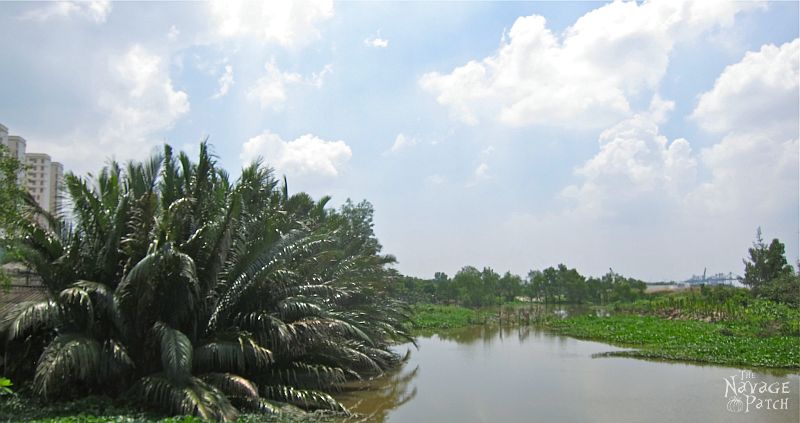 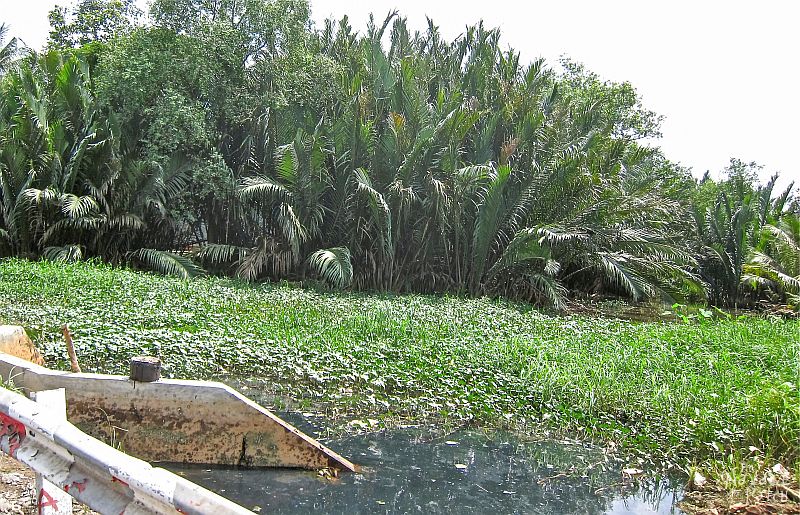 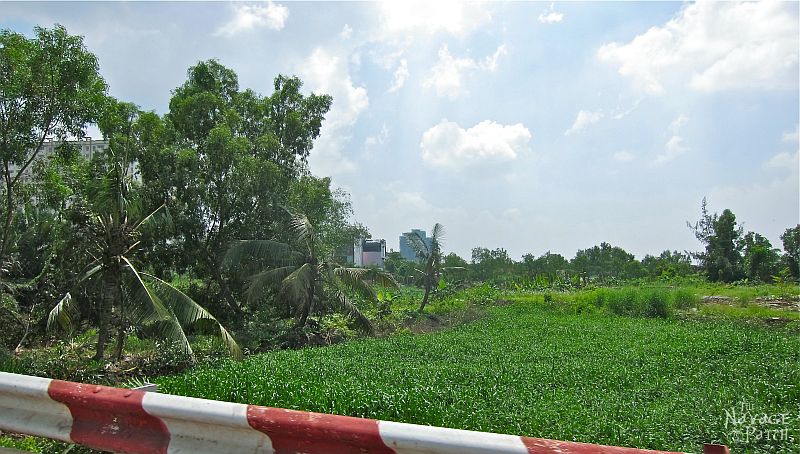 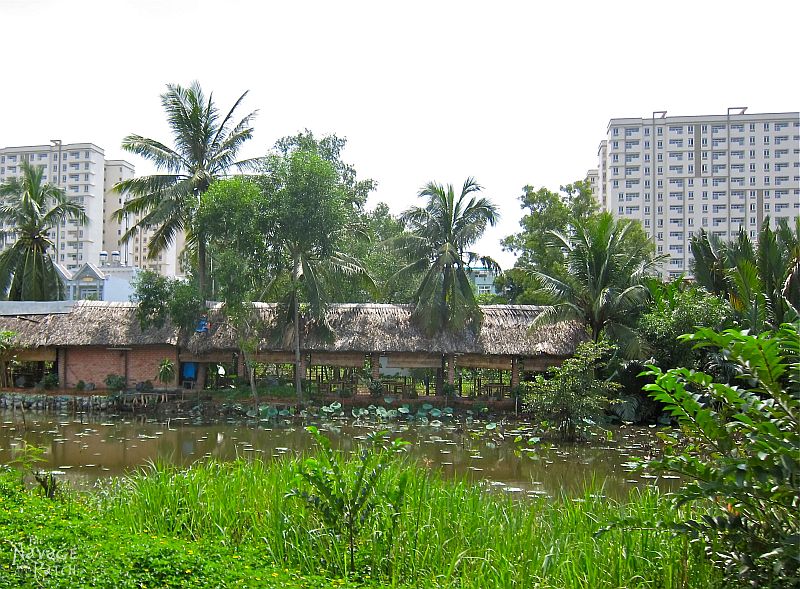 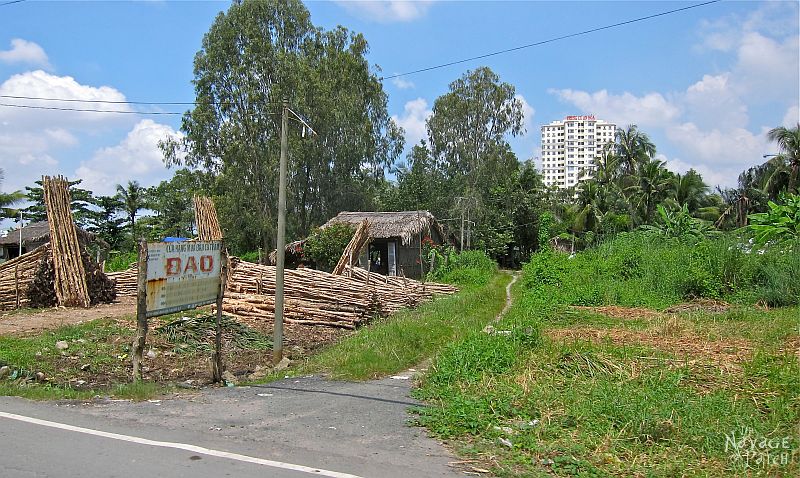 And finally, we turned onto a small street that led to a villa. 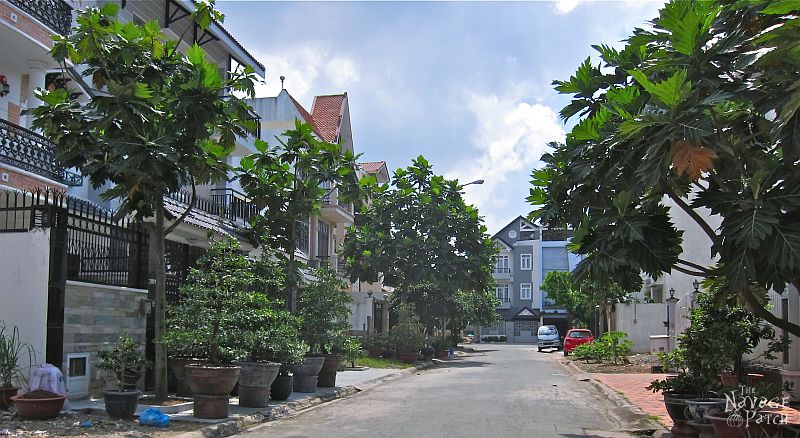 This villa would become our home for the next nine months. 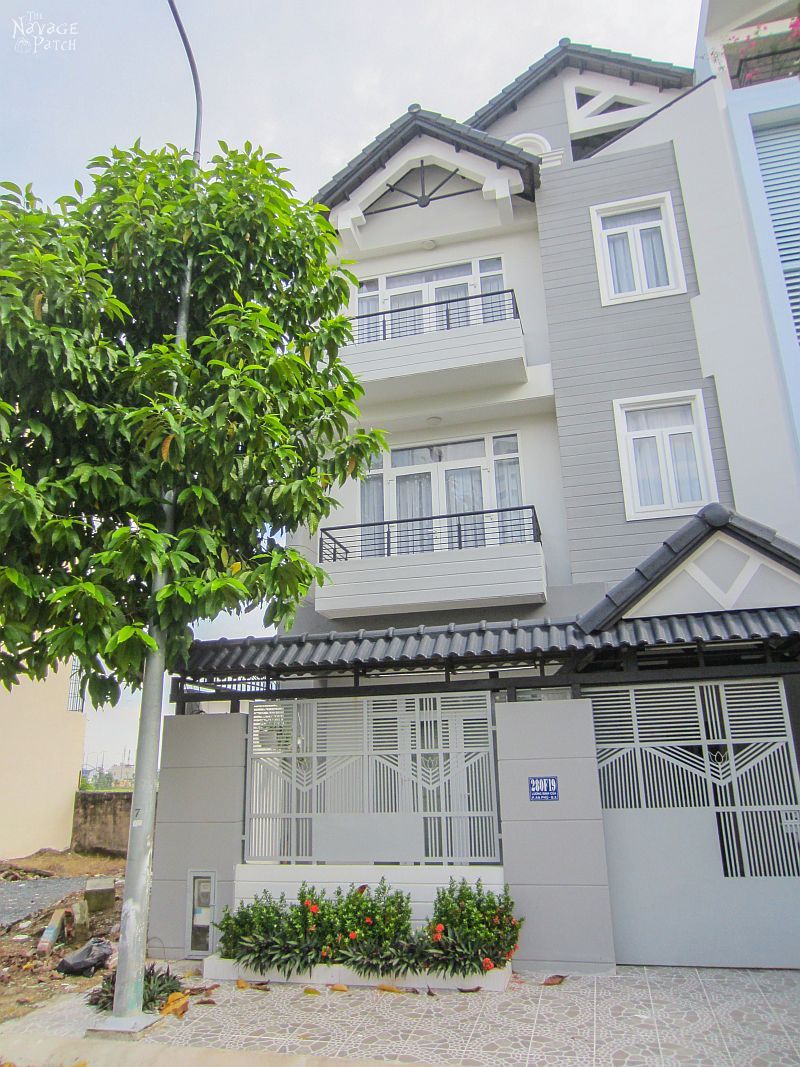 Four floors (top floor is a terrace), four bedrooms, four full bathrooms, one half bath and a koi pond. More space than we would ever need, even after our son would join us in a couple of months. All this for less rent than a San Francisco studio apartment (2011 prices).

We made an appointment to sign the lease with the owners, Hang (wife) and Tri (husband), the next day. The next morning, we got ourselves mobile phones. We signed the lease and moved in that very night. We had arrived in Vietnam late on Saturday night. Less than 48 hours later, we were moving into our own villa. This was an amazing place!

The back of the house abutted a large open pasture. Here’s a shot from the terrace. 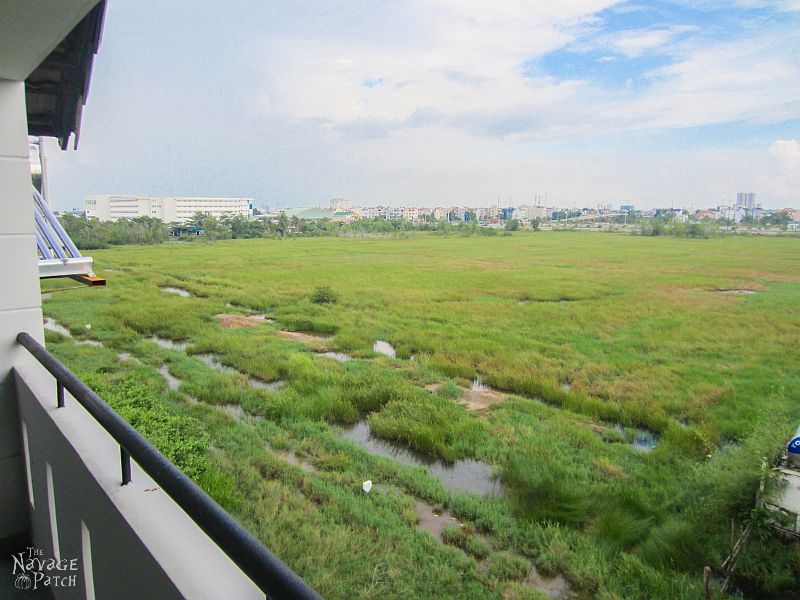 And here are two shots from the kitchen balcony. 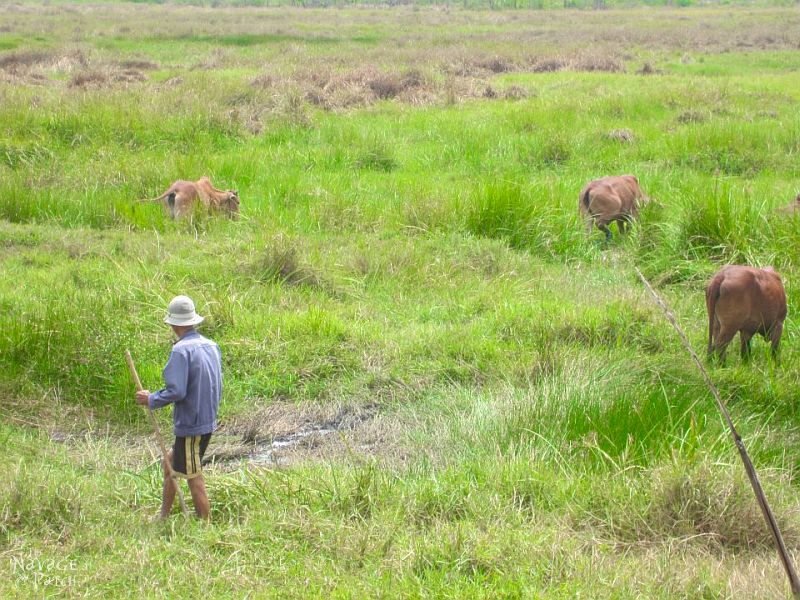 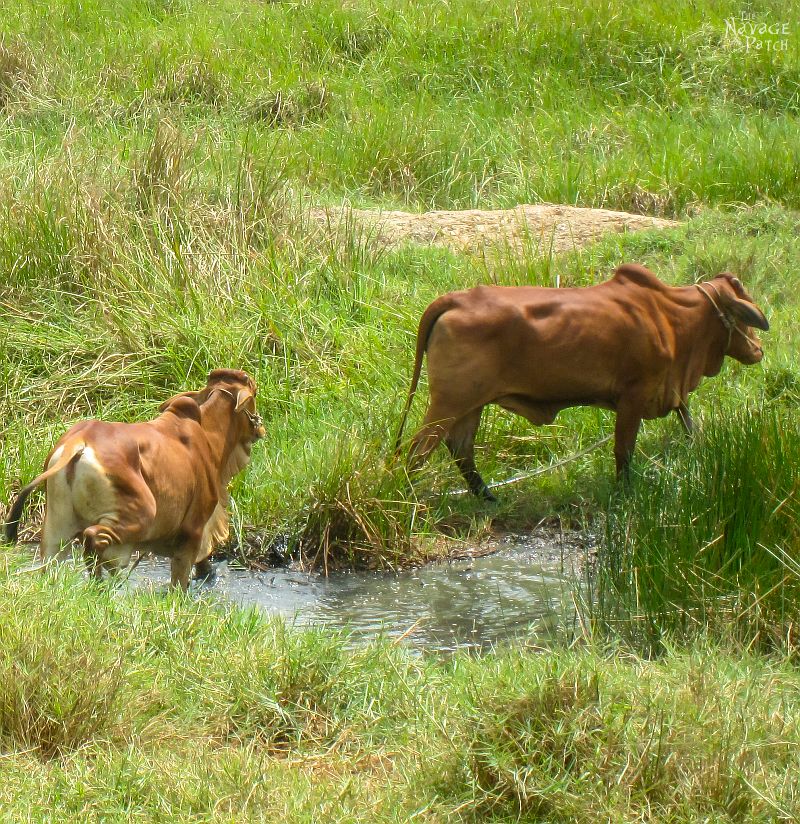 We moved our duffel bags and suitcases into the villa. The kitchen was empty. We’d need to buy food, pots and pans, utensils, plates, everything. The bedroom had a bed, but we had no pillows or bedding. We had no bath towels. We had no furniture. It was 8:00 at night, and we had nothing. We were smack dab in the middle of Saigon, the real Saigon, where we couldn’t count on someone speaking English, and we had to figure out where the closest big store was – one that sold everything from housewares to food. Then we had to figure out how to get to it. And we only had an hour to do it all.