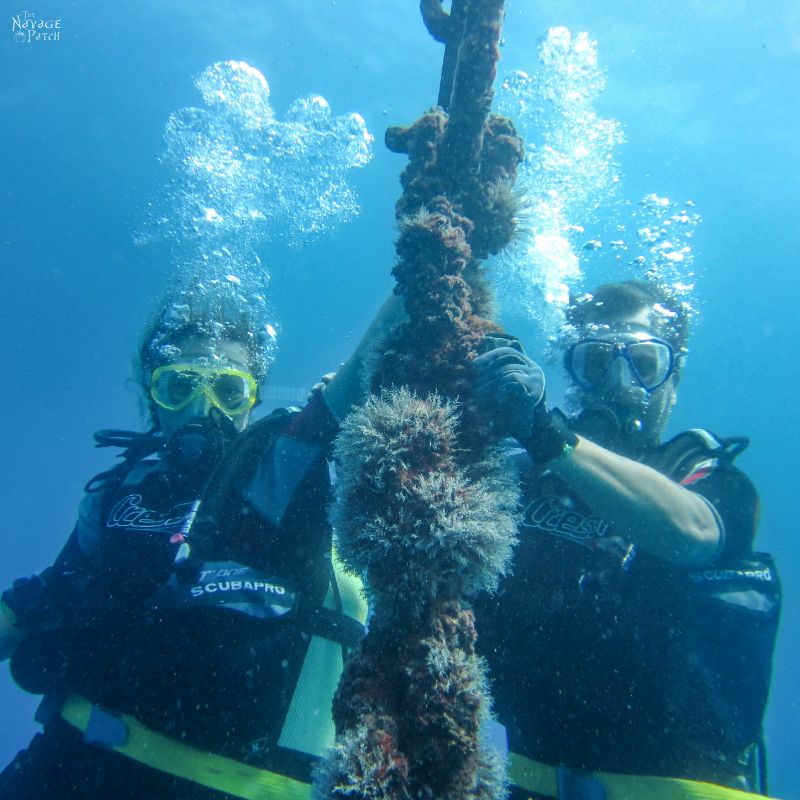 Before she met me, when her life was a tangle of designer clothing and glamorous nightclubs on the boulevards of Abu Dhabi, Handan found the time to become an expert scuba diver in the warm cerulean waters of the Persian Gulf. I had never learned to dive, but one day on our vacation, as I lay browning my belly fat under the searing Antalya sun, I decided it was time. Perhaps it was the merciless din of screaming children splashing in the pool that made me crave the sweet silence of the azure depths. Perhaps it was my swim with the dolphin which exposed me to a thrilling new world. Or maybe it was the hotel’s Fun Patrol that finally drove me from my lounge chair and into the Mediterranean.

I called them the Fun Patrol. In fact, they were mercenaries contracted by the hotel. Their mission: to Exterminate Relaxation with Extreme Prejudice and Maximize “Fun.” They carried out their mission by hectoring and cajoling supine sunbathers into engaging in tortuous acts of water aerobics, water sports, water dancing and other inane and humiliating games. The Fun Patrol were all young Turks – bronzed Adonises and sculpted Aphrodites – whose youthful vigor and permasmiles belied the cruelty of their purpose. One member of the Fun Patrol stood far above the rest on the hierarchy of misery. I will call him Ahab, and I was his White Whale. For the two weeks of our vacation, Ahab’s consuming passion was to hunt me wherever I sought peaceful solitude and try to drag me into The Pool for One of His Games.

During one of our first days at the resort, I made the profound error of joining one of Ahab’s games. It was a sprawling mess of a water polo game, and I agreed to help one of the teams, as they were short one person. I heaved myself out of my deckchair, the red stripes across my back a proud testament to my masterful lounging, and hot-footed it to the water’s edge. I dove in and joined the melee. Despite my best efforts and the apoplectic protestations of my circulatory system, we lost the match by one point. A pointless waste. I heaved my dripping carcass out of the pool and resumed my regularly scheduled relaxing. I vowed never to play again and put the whole affair out of mind. The rest of the day passed without further incident. That evening, as Handan and I enjoyed a few cocktails by the pool while waiting for some local singer to start crooning, I spied Ahab, dressed to kill, chatting up some young ladies staying at the hotel. Burning the candle at both ends, then. Good. Maybe he’d sleep in the next day.

“Hello, my friend. What’s up, dude?” The words pierced my mid-morning poolside slumber. The accent. The cadence. The clipped pronunciation. I knew it was Ahab even before I opened my eyes. I sighed and cracked open an eyelid.

“My man. We need another for water polo. Come.”

“Okay, my friend, but I’ll be back for you later, okay, buddy?” His smile never faltered, but his black eyes promised suffering. 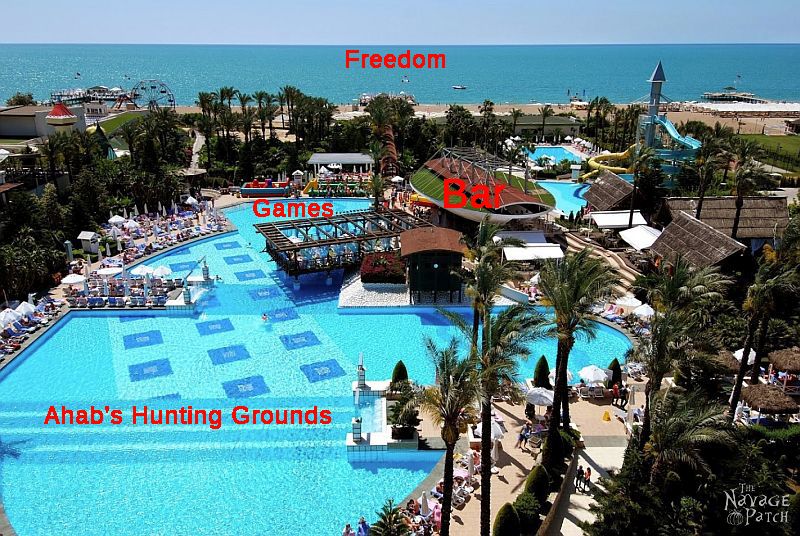 I sat at the pool bar, drinking a fine Turkish lager while taking respite from the blistering noonday sun. The bottle dripped with condensation, and the cool droplets splashed onto my burning skin as I took a sip.

I choked and snorted beer out of my nose. Ahab!

“Hey, take it easy, my man, you going to hurt yourself! Come on, bro, I need more people for Balance Board.”

Balance Board. The worst game of them all. Hapless guests were herded up and sent into the pool, one-by-one. They would try to balance on a surfboard without falling into the pool while members of the Fun Patrol attacked them with padded sticks.

I took another swig of my Efes lager. “I’m good.”

The next day, as I again lay poolside with the sounds of aqua aerobics pummeling my sanity, I spotted a young man with scuba gear at one end of the pool. I told Handan that I wanted to go check it out. She came along with me. The man was giving a short introduction to scuba. I introduced myself and indicated my interest in learning. His name was Melih, and he was a dive instructor at Asterion Diving School. I put on the vest with the air tank, I yanked the goggles over my head, stuck the regulator in my mouth and ducked underwater. It was perfection. Now that I had a taste, I wanted more. Handan got the details, and the next day, Handan, Barish and I set out for Asterion.

Since Handan was a local (she was born in Antalya), we hopped on a bus to get to the dive school which was a part of the Asterion Hotel on the other side of town. The bus dropped us off at the top of a cliff. A steep staircase led down to the water. I found Melih, and we geared up and had our first lesson. Over the next few days, I took more lessons. These were administered by a rugged Turk named Haşmet (pronounced Hashmet). The goal of these lessons was to get me certified, so in the future, Handan and I would be able to dive together. For my last dive before my final diving test, Haşmet wanted to take me to a shipwreck, farther out into the Mediterranean and much deeper than I had been for the previous lessons. For this dive, Handan decided to rent some gear and join us. But before heading out, we first had a swim closer to shore. Look, I understand that gawking at vacation photos while friends or relatives drone on about how magical it all was is a special kind of torture. I will attempt to spare you that pain.

Just a couple out for a leisurely swim in the Mediterranean… 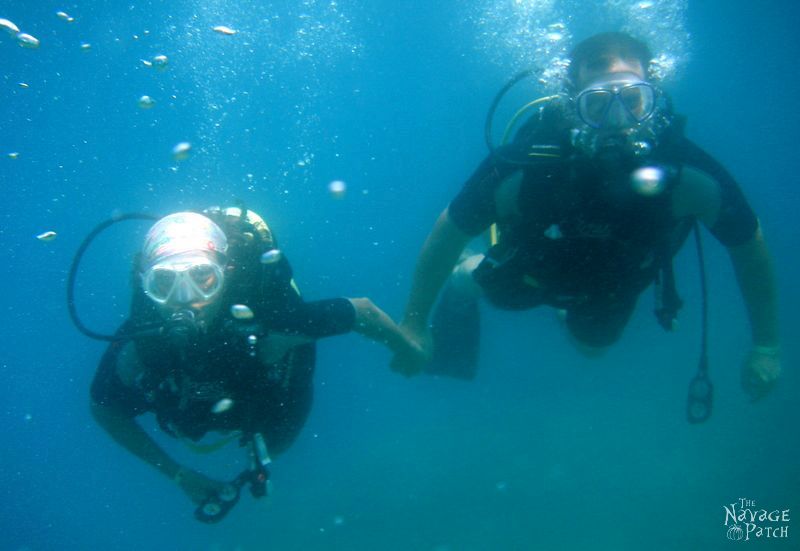 …when they spy something on the sea floor ahead.

Man: What’s that?
Woman: What? I don’t see anything. 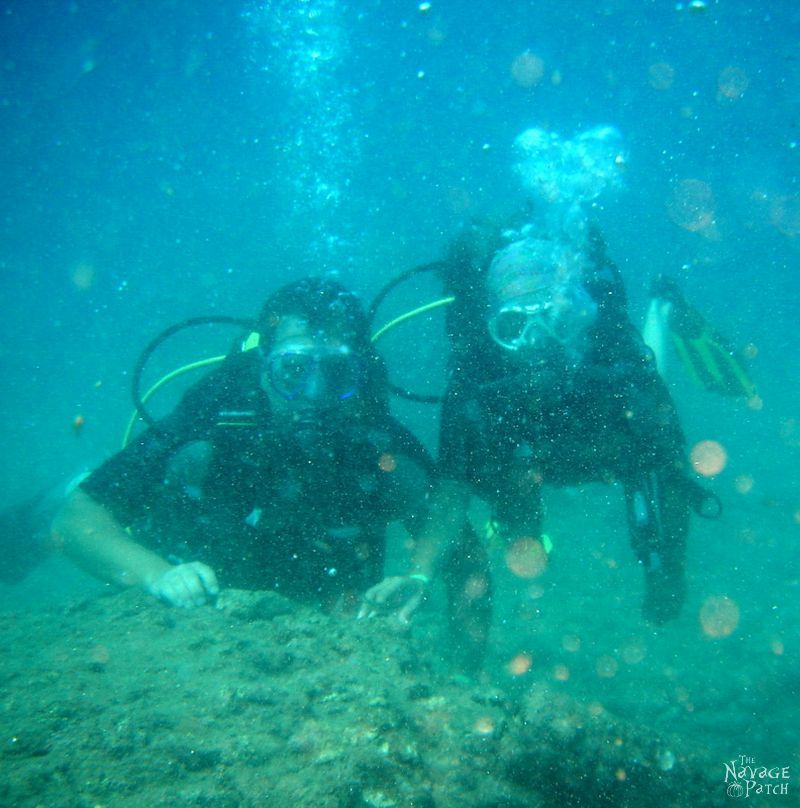 Woman: You mean this?
Man: Not that, Woman! 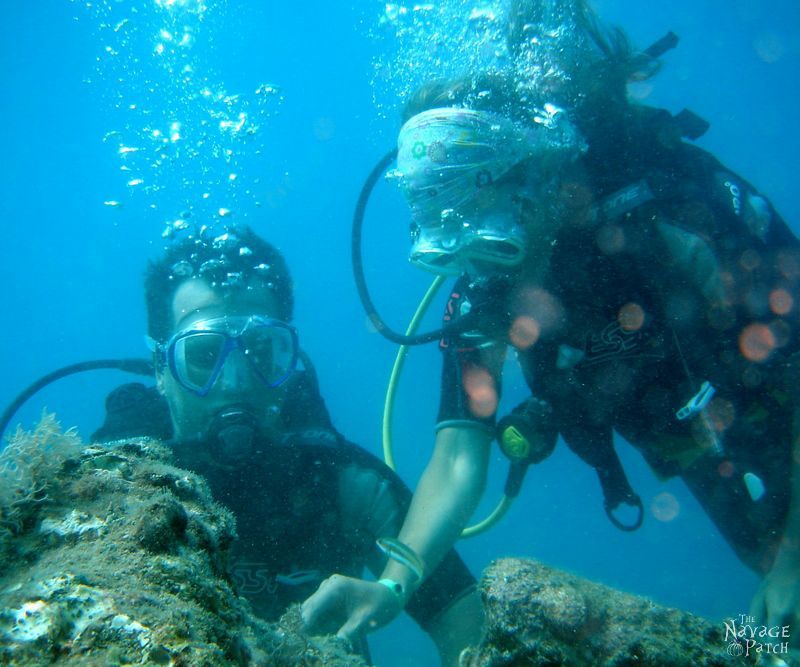 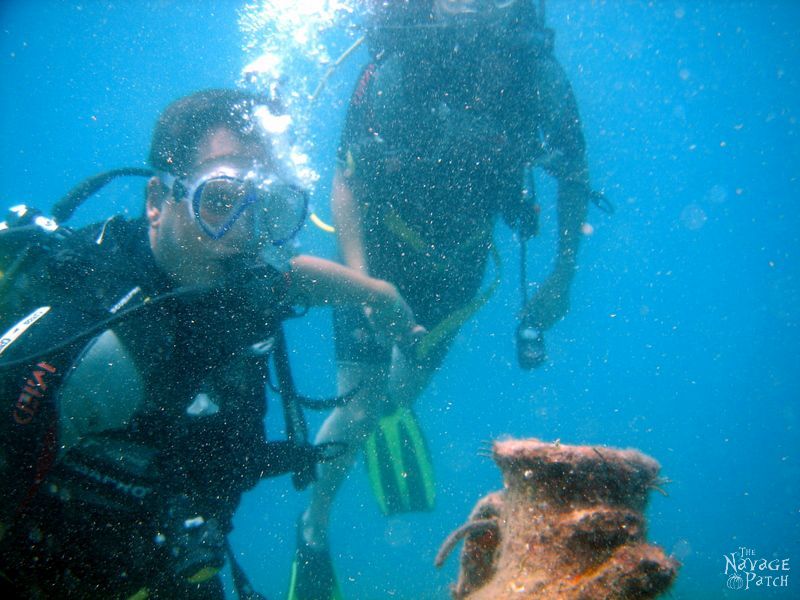 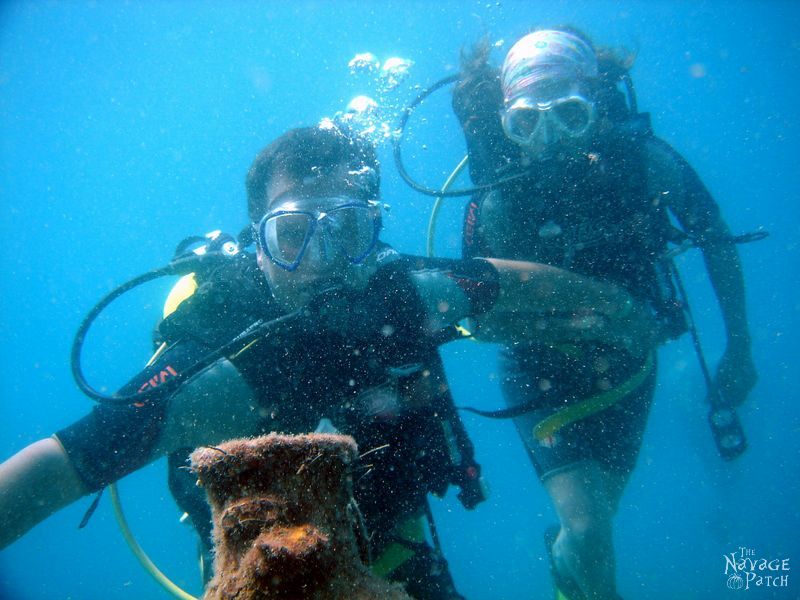 Man: We’re going to be rich! RICH, I tell you!
Woman: Mmmhmmm…how rich, then? 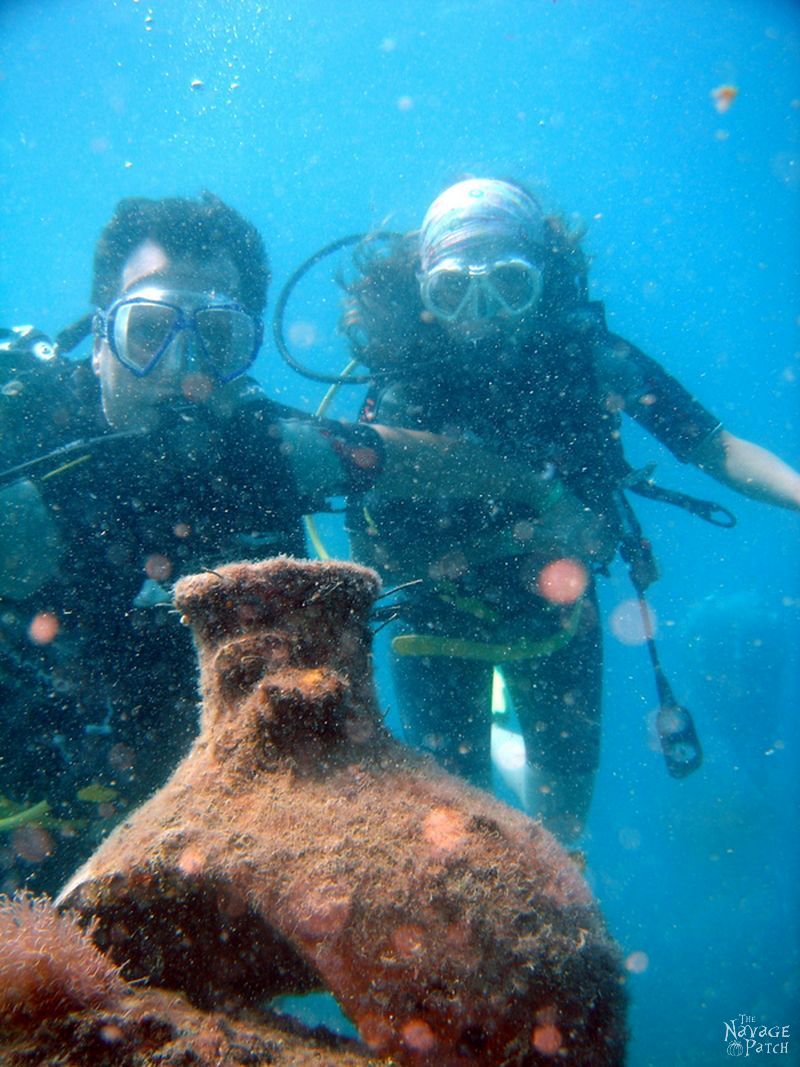 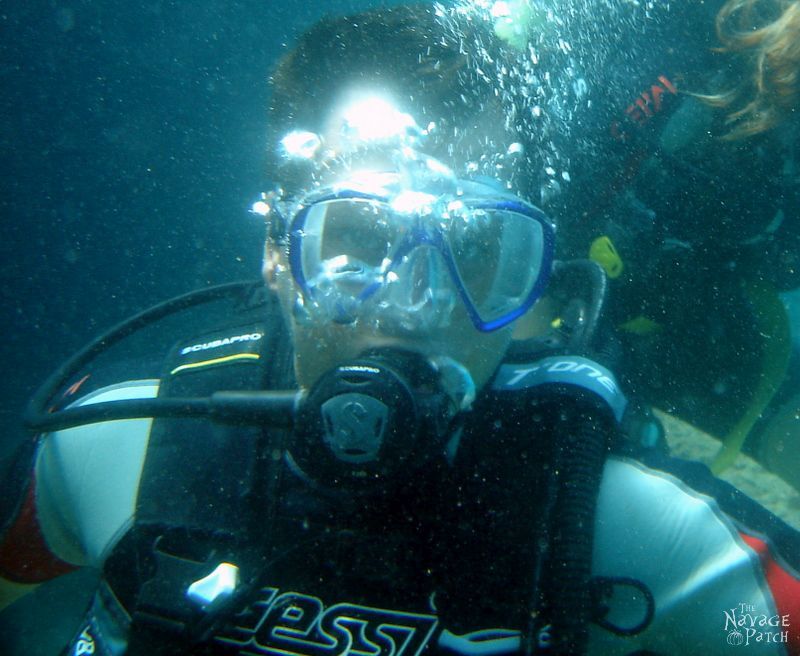 Woman: Oh my god, he is so embarrassing… 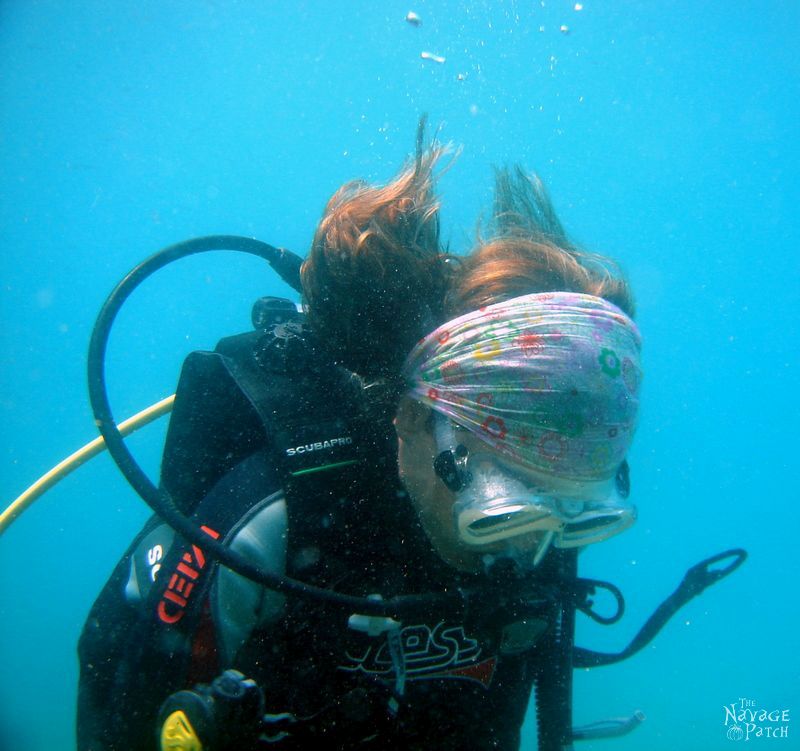 Woman: You idiot! You do realize that thousands of people dive here each year, right? That stupid jug probably belongs to your diving instructor’s mother! He most likely tossed it in here so tourists could photograph it!
Man: But, but…we’re gonna be rich…priceless artifact…Anatolia… 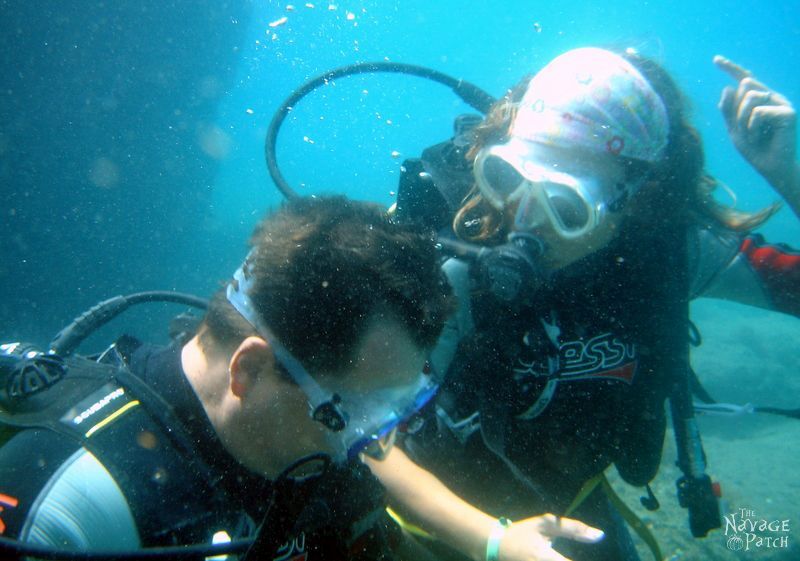 Man: Look, maybe I can still find a buyer for it.
Woman: What am I going to do with you? 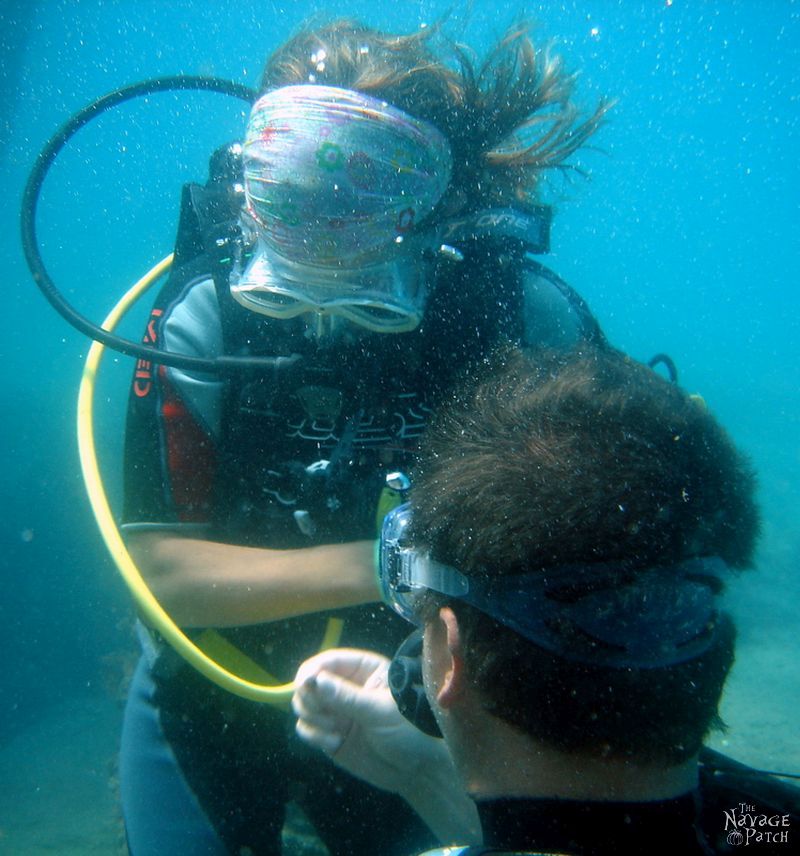 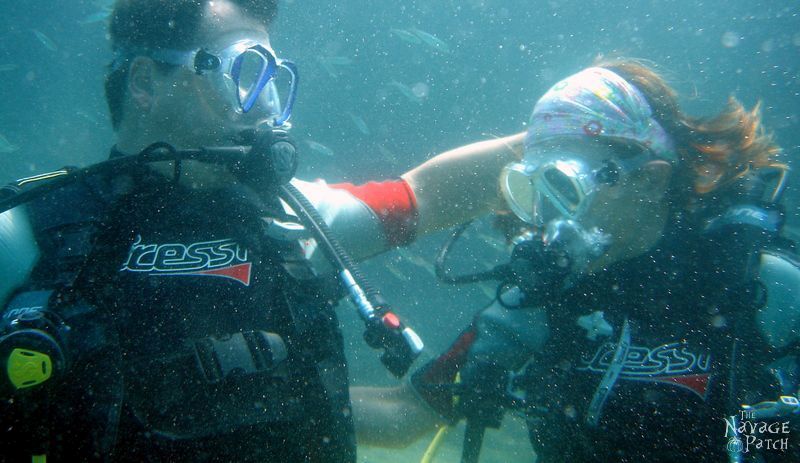 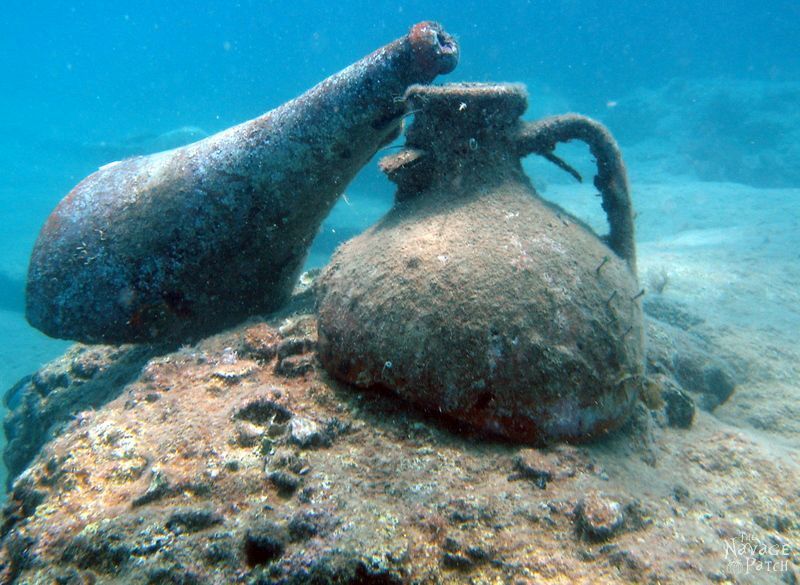 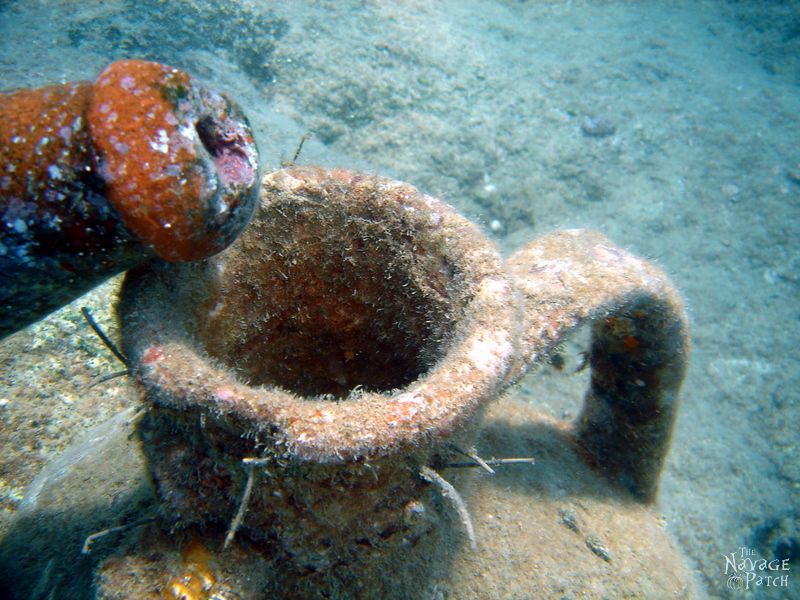 Man: I’ll just take this one here. I don’t think anyone will notice… 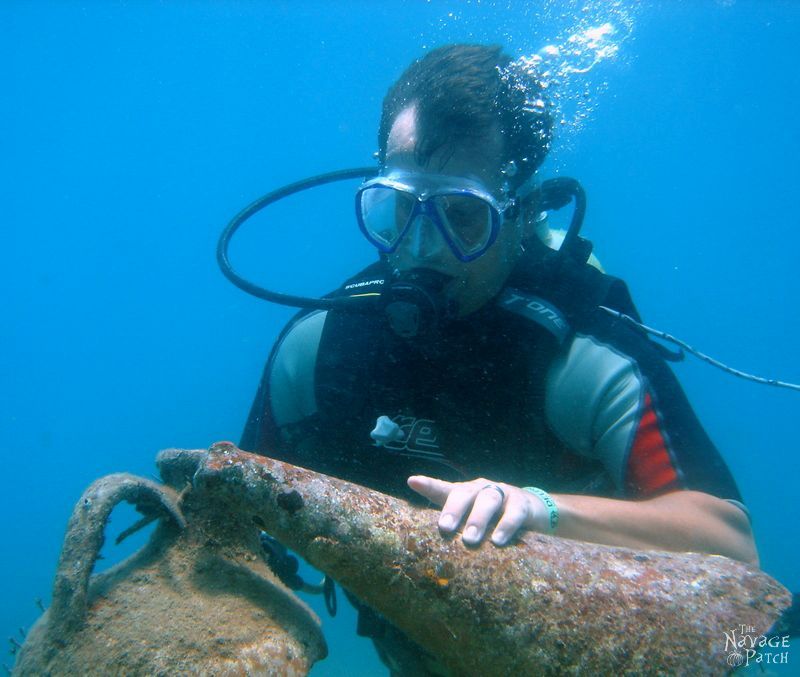 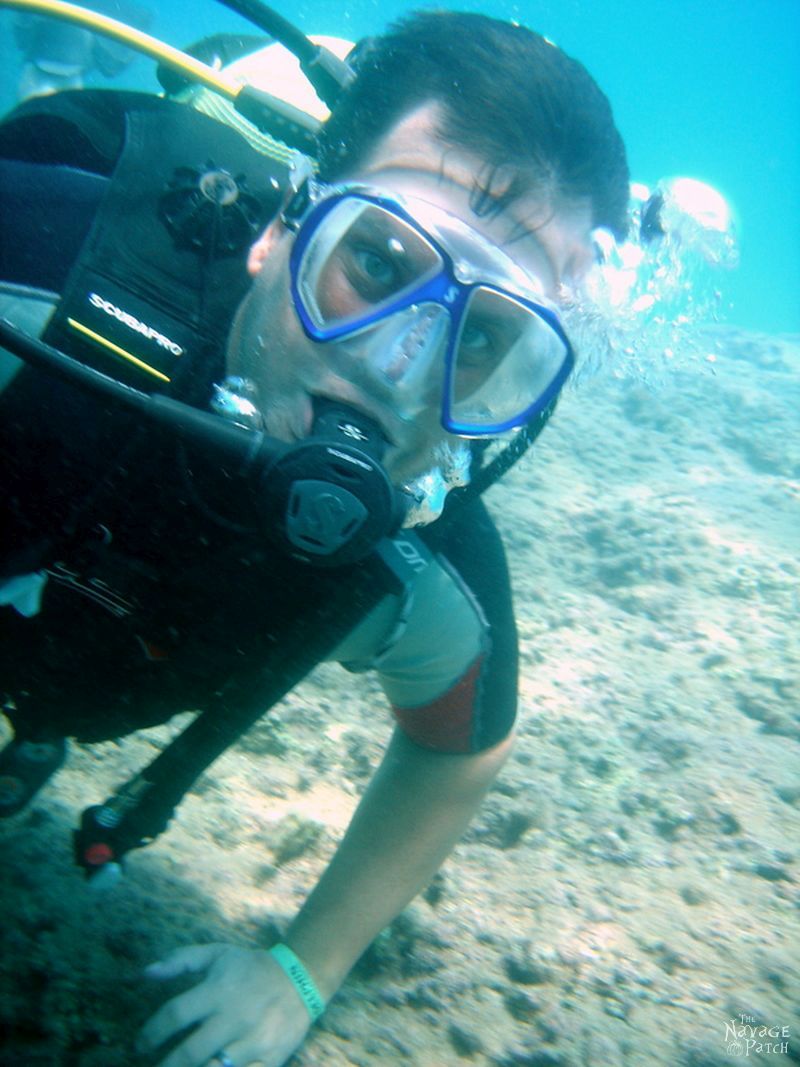 Haşmet: Hey! What are you guys doing?
Man: Nuthin’… 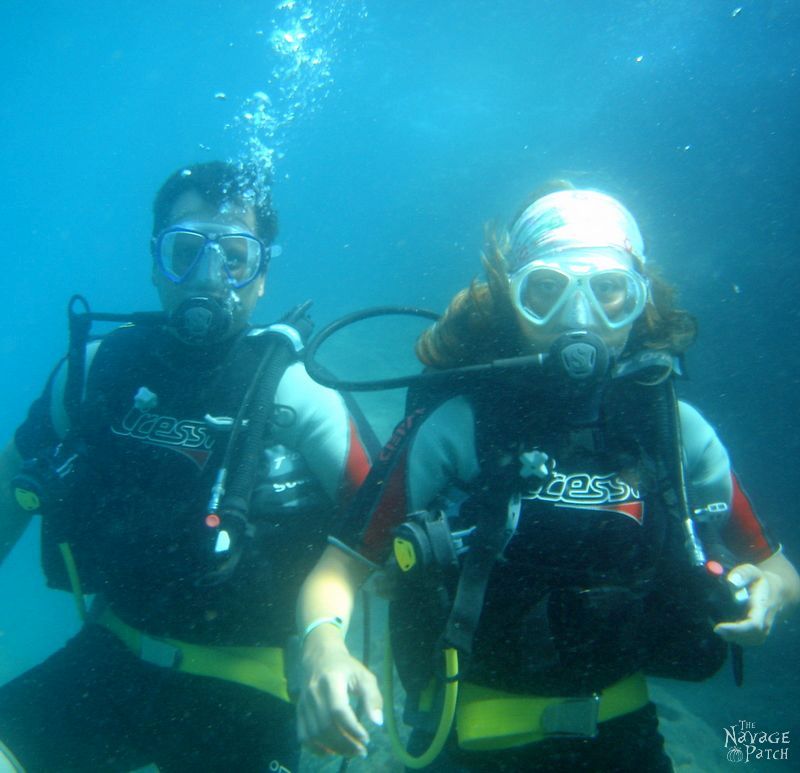 Haşmet: Hey, gimme back my mom’s jug! Here, you can have this magnificent clam instead. 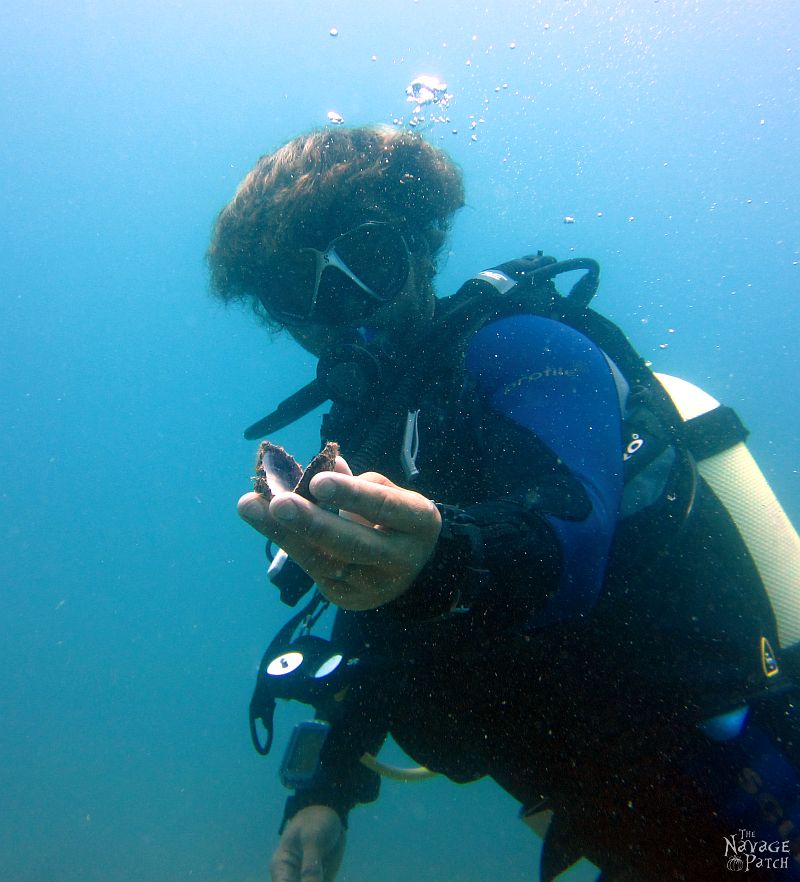 Man: I had it in my hand! It was worth a fortune! But a shark chased me out of there, and I had to drop it! Also, I think there were scuba pirates. They chased me, too. Phew, I’m lucky I made it out of there alive! Hey, where’s my wife? 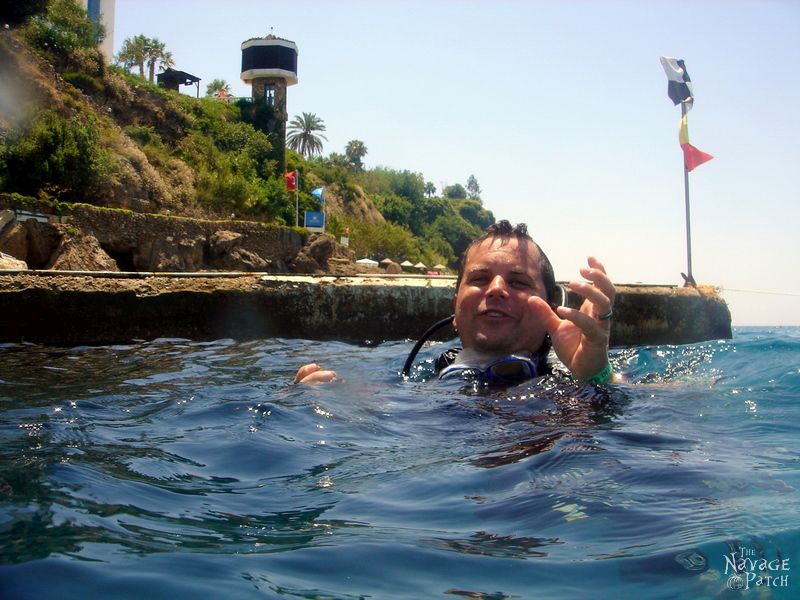 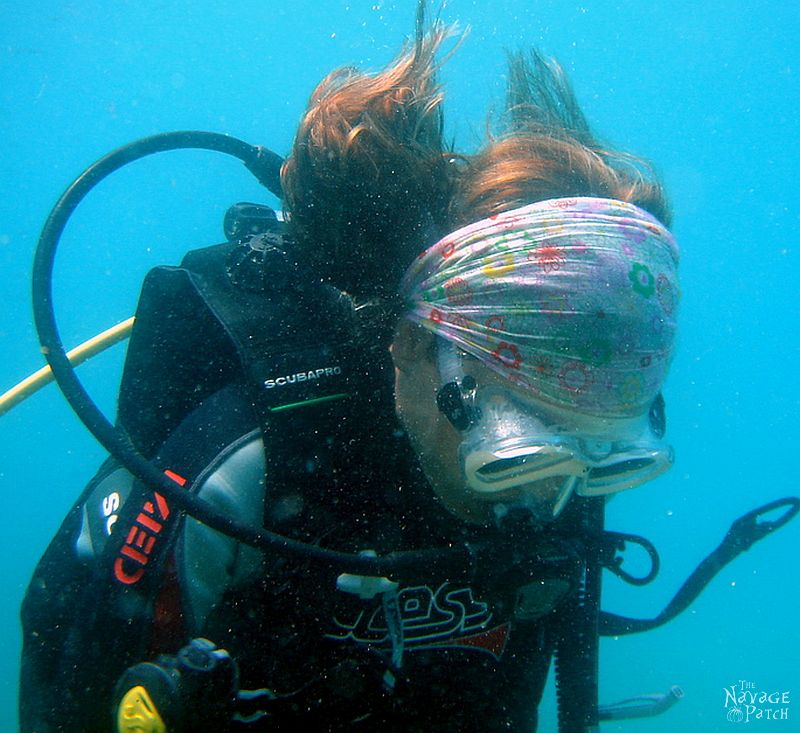 See, that wasn’t too bad, right? And I promise (maybe) that I’m done with vacation pics – they are the absolute worst.

As for Ahab, well, he never caught this white whale. Like the titular character in Free Willy, I was able to jump into a far greater sea, forever eluding Ahab and the Fun Patrol.

Did I say I wouldn’t show any more vacation pics? I lied. Later that night we were having dinner at a French restaurant inside the resort. I felt it was time Barish ate some frogs legs, so I ordered up a plate. When they arrived, Handan and I informed him it was chicken. He remarked that he’d never seen chicken shaped like that. Indeed. But he tucked into them nonetheless. I asked him to pose for a photo with his “chicken.” 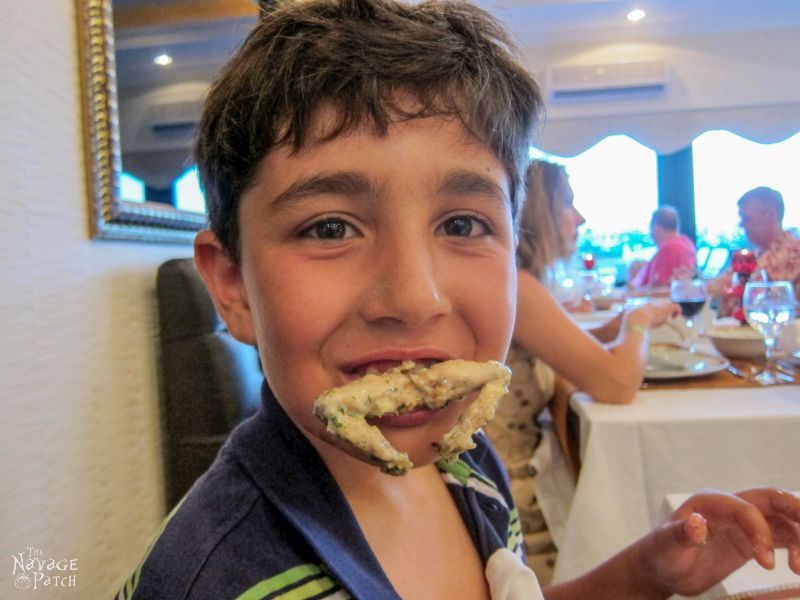 After taking the picture, we told him our little secret. Hehehehe. He was angry for about five seconds, and then he got back to the serious business of gobbling up the rest of the legs.

Okay, that’s it. No more vacation pics and no more vacation posts. At least for a little while. This post took me a week to write. Talk about writer’s block! Oh, what a misery. To write an engaging and funny post about a vacation is like taking a bowl of instant oatmeal and trying to gussy it up and pass it off as Beef Wellington. Next time, we’re back to the real world with part 1 of our adventures in Vietnam.