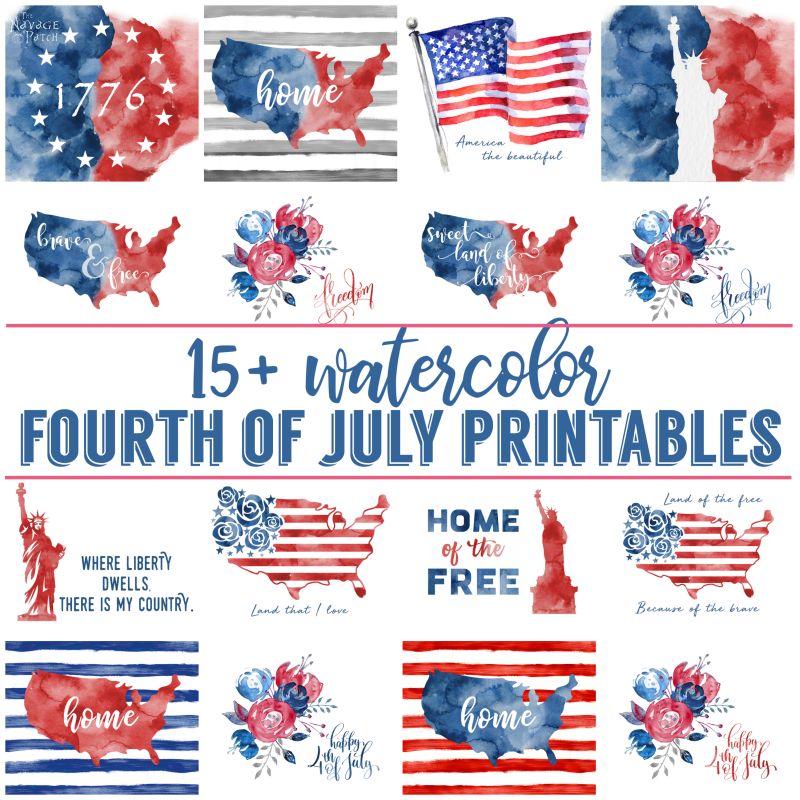 Display your patriotism in style with our free Watercolor Fourth of July Printables! Available in 2 sizes in both landscape and portrait layouts.

You guys love watercolor printables, so today we’re giving you some awesome free watercolor 4th of July printables! I know many of you are impatient – you just want to get right to the printables. In fact, those folks are probably not even reading this!

But I also know that quite a few of you actually enjoy reading the words that fly from my fingertips.

This little story is for you!

It has absolutely nothing to do with our Fourth of July printables, but hey, telling random stories is what I do best.

And I enjoy it!

So here’s a little something to keep you occupied while you scroll through Handan’s beautiful 4th of July printables!

Ah, the Fourth of July!

It’s the one glorious day of the year when men gather to eat and drink their weight in hot dogs and beer while celebrating the birth of this fine nation by blowing up a tiny piece of it with small explosives made in China.

But it is just one of many days in a year that wives and mothers and daughters shake their heads in communal disbelief and wonder how the hell humanity has made it this far.

When I was a kid, we spent 3 or 4 Independence Days at the summer house of an extended uncle on Rogers Lake in Connecticut.

Uncle Ed was a beloved fireman 364 days of the year.

On the Fourth of July, he was The Firecracker Man!

Even my dopey preteen mind saw the hilarious irony in that.

But I suppose, what better man to have around if something went wrong with all those explosives?

Though there were never any major catastrophes, each year I managed to blow up some small part of myself or suffer some other mishap.

Smoke bombs are round red spheres about an inch in diameter with a fuse sticking out. Once the fuse burns down, an intense flame shoots out of the sphere for about 2 or 3 seconds. This is the burn that will eventually produce the smoke.

I tossed my smoke bomb into the grass by the shed, but no smoke came out.

I figured it was a dud. You get one from time to time.

No biggie. I walked over, reached down and picked it up.

It was just taking its time.

The instant I picked it from the grass, the intense blue flame came roaring out of the fuse hole right into my thumb.

I yelped like puppy and tossed the very-live smoke bomb back into the grass, where it put out a fantastic display of thick white smoke.

I ran to my mommy as a big yellow blister grew on my singed and throbbing thumb.

Remember Black Cats? They are those little firecrackers that come in a red paper package.

You can either light the whole pack off at once or untie them to light them individually.

I preferred the latter. I would unwind each pack and stroll around the yard with a pocketful of firecrackers. In my left hand, I carried a punk – a small length of rope with one end lit and smoldering. It was much easier to light our firecrackers that way.

So I’d wander around lighting firecrackers and tossing them up in the air or out ahead of me. I walked down to the waterfront where the bigger kids were tossing cherry bombs into the lake.

My cousin Patrick was there. I stood a little behind him. The big kids intimidated me.

I casually lit another firecracker, intending to toss it away from the group.

But it had a short fuse.

An instant after I touched it to the punk, the fuse had burned most of the way to the firecracker.

No time to think.

Only time to react.

So my body did what any body would do when it senses harm: create as much distance between itself and the danger as possible.

My arm spasm’d outward, ejecting the dangerous thing from my orbit.

No thought went into the throw. I just threw…

The little Black Cat exploded about a foot from Patrick’s head, and he jumped up with a scream.

He whirled around, and there was fire in his Irish eyes.

He glowered at me.

“It had a short fuse…” I said, offering the only explanation I could think of.

I blanched, and then I turned tail and ran back up the hill towards the safety of the adults.

Not long after that, I got another short fuse.

I didn’t manage to throw it in time, so it blew up in my hand.

Black Cats aren’t too powerful, so it didn’t do any damage, but it sure hurt like hell to my little hands.

Especially after the verbal sting I had just received.

And then there was the year of the Roman candle mishap…

It was our last year at Rogers Lake, though I didn’t know it at the time.

Everyone was getting older. The big kids from previous years were playing a more dangerous game.

Cherry bombing lily pads may have been fun in the past, but that year they discovered the joys of Roman candles.

Now, traditionally, Roman candles are lit and then stuck in the ground or in a tube so they can spew out their colored fireballs a safe distance from stupid humans.

But these kids discovered that you could hold the candle and wave it around in circles in front of you – sort of like a multi-color hand canon.

I had to admit – these kids were cool, and I wanted in on that action.

I asked Patrick if I could try.

He handed me a Roman candle.

He lit the fuse.

The first fireball shot out with a mighty thwump!

The second colored ball followed closely behind, and I felt like a mighty soldier!

I kept swirling my candle, but nothing came out.

The Roman candle in my hand exploded with a tremendous bang.

I watched as it fell tattered and smoldering to my feet.

Then I looked up and saw the shock on everyone’s face.

My own face must have looked the same.

I looked at my hand.

But I couldn’t really move it.

And I couldn’t really feel it.

Huh. I should probably go tell my mom.

It took a few hours for the feeling and mobility to return.

No one had ever seen a Roman candle explode like that.

It was just my lucky day, I guess!

That was our last year at the lake. I guess my mother had enough of my yearly injuries!

When the Fourth rolls around each year, my happiness comes from my family by my side and a big piece of meat on the grill. That’s all I need.

I’ll leave the fireworks to the professionals! 🙂

We hope liked these 15+ gorgeous and FREE 4th of July printables! Which one(s) will you be printing out and decorating with this year? However you plan on celebrating, we hope you have a safe and wonderful 4th of July!

We love to see our printables out in the wild! If you display our free printables in your home or use our free SVGs in your projects, and take a picture and post it on Instagram, be sure to tag us @TheNavagePatch!

As usual, here’s some information on these free watercolor Fourth of July printables: today’s freebies come in 8.5×11 inch and 16×20 inch sizes. The 8.5×11 inch printables are PDFs, so they are not scalable. But the 16×20 inch printables are JPGs, so you can scale them up or down as necessary. Remember, 16×20 inch JPGs can scale down to 12×15 / 8×10 / 4×5 inches with no problems. If you need help with scaling down these printables so you can print them on your home printer, then make sure you check out Handan’s “How To Easily Resize Pictures” post.

Now it’s time to click on the button below to download today’s free watercolor patriotic printables – you’ll find them under the 4th of July section of The VIP Patch.