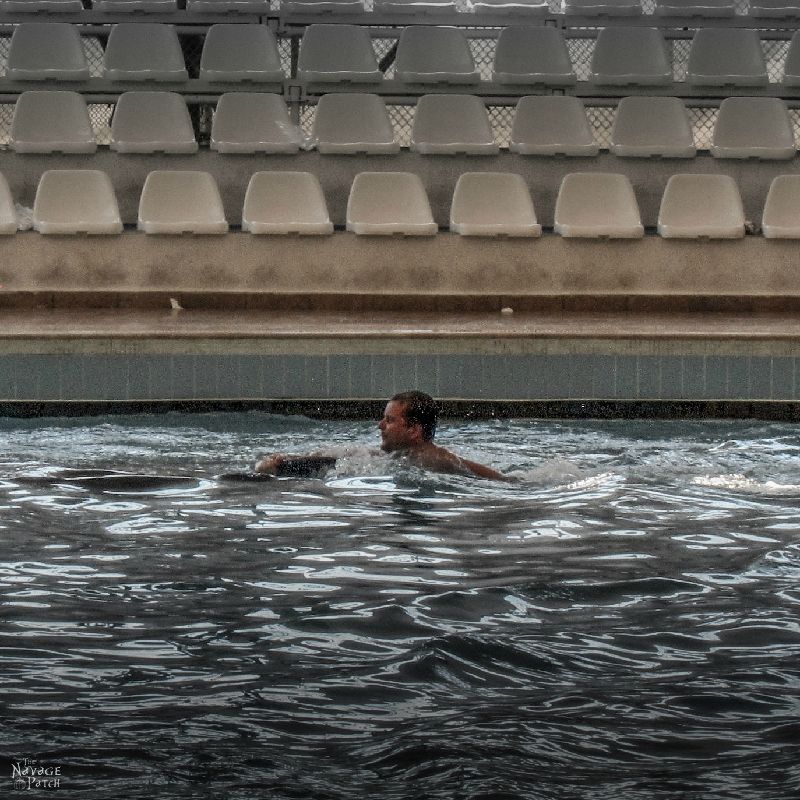 We did our time. We paid our dues. Our year in Afghanistan was over, and we were headed to Vietnam. But first, we wanted to have a little fun. Two weeks at an all-inclusive resort in the Turkish Riviera was just what we needed to decompress. We chose a resort named Delphin Diva in the seaside city of Antalya – Handan’s birthplace. But this trip was not just for Handan and me. Our son, Barish – the boy I had only met once the summer before – would be joining us for this holiday. Barish lived in Almaty, Kazakhstan with his father. They both traveled to Istanbul where his father handed him off to Handan and me. The three of us boarded a plane for Antalya, and our first family vacation began.

Okay, look, maybe you’re expecting a lot of smiley, happy pictures of us doing family things, but the reality is we didn’t take a lot of pictures back then. In fact, the only times we really went nuts with the shutter was when we all went parasailing, when Handan and I went scuba diving, and when we took Barish to see an aquarium show, followed by us all swimming with a dolphin. Let’s start with the dolphin.

Everyone loves dolphins. How could they not? They are more intelligent and better looking than most humans, so that makes them worthy of our admiration, right? Isn’t that what television, film and print media teaches us? Anyway, one day while sitting by the pool, I gathered up the family and declared it time for us to Swim With the Dolphins. We made arrangements with the concierge, crowded into a shuttle bus and made our way across town to the aquarium. As we filed into the miniature stadium where the water show would take place, I took note of the other patrons. It was like being in Moscow during a heat wave. Throngs of Russian-speaking families in various states of undress jostled and jockeyed their way to the prime pool-side seats. The show began.

We watched as they paraded the usual aquatic beasts around the pool: dolphins, sea lions, seals and the like. The show concluded with this great white thing (a beluga whale) heaving itself up onto the deck to the cheers and adulation of the Soviet Bloc. Good show, whitey! 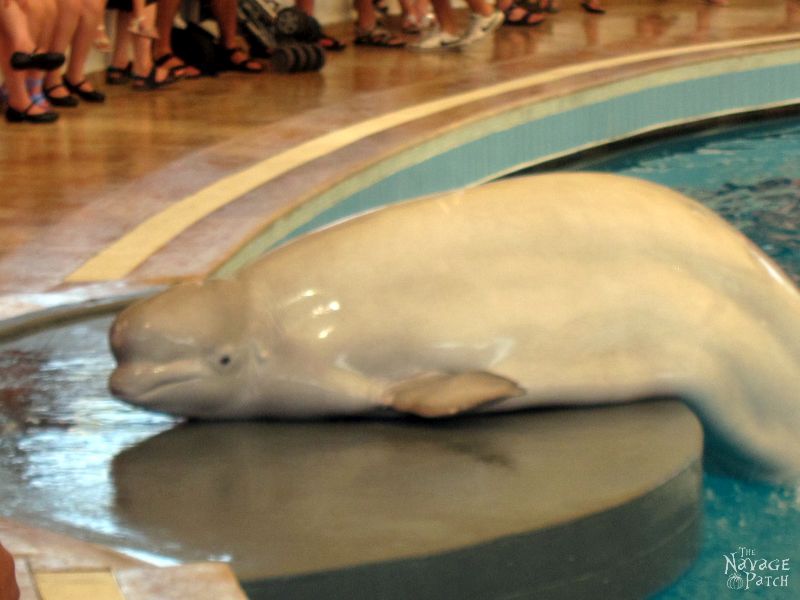 I scanned the queue. These people didn’t look enlightened. They looked just like me, only slimmer. Hmm. Maybe the Great Transformation only happened after The Dolphin had blessed you with his Magic Blowhole. We waited by the pool as staff members checked tickets and ushered small groups behind a great curtain, whereupon they would reappear on the far side of the pool, flanked by  more aquarium staff. Words were conveyed by the sentries to the Chosen. The Chosen then descended into the pool.

At last, it was our turn. Handan, Barish and I were corralled behind the curtain and ordered to disrobe.

Another woman appeared in front of us. “You and you!” She barked, indicating Barish and Handan. “Come with me!” I smiled and nodded encouragement as they were herded around a corner to the pool. I waited.

After some time, the woman reappeared. “You and you!” Her gaze fell upon me and a young Russian girl. “Come!”

I swallowed hard and led the way, trying to shield the small one from whatever lay around the corner.

I was flanked the moment I rounded the bend towards the pool. They had me. They led me poolside, while one of them spoke.

I grabbed the ladder and lowered myself into the pool. Holy crap, the water was freezing! The weather was so unbearably hot in Antalya that I had assumed the water would be tropical. But this! This was arctic! I shriveled in places and shivered all over. The Dolphin was there, waiting for me. I swam over and put my arms around him. I looked up at the photographer like a dutiful subject and smiled. I went through all the motions with the great mammal: I hugged it, I rubbed its belly and I kissed it. All the while I kept thinking how many times has this poor beast endured this? 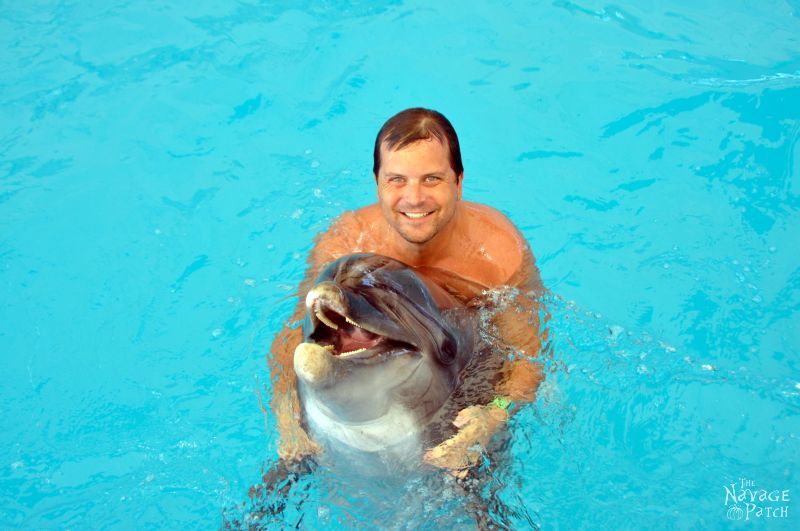 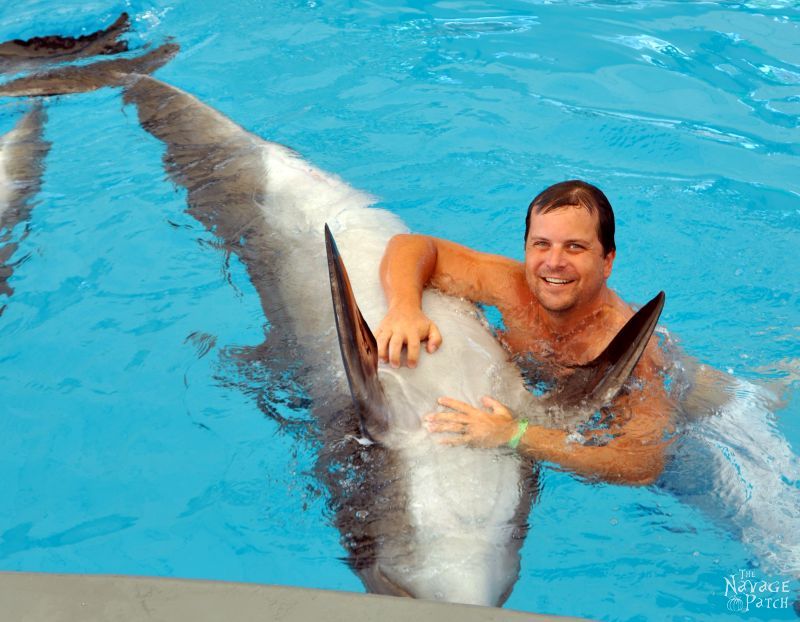 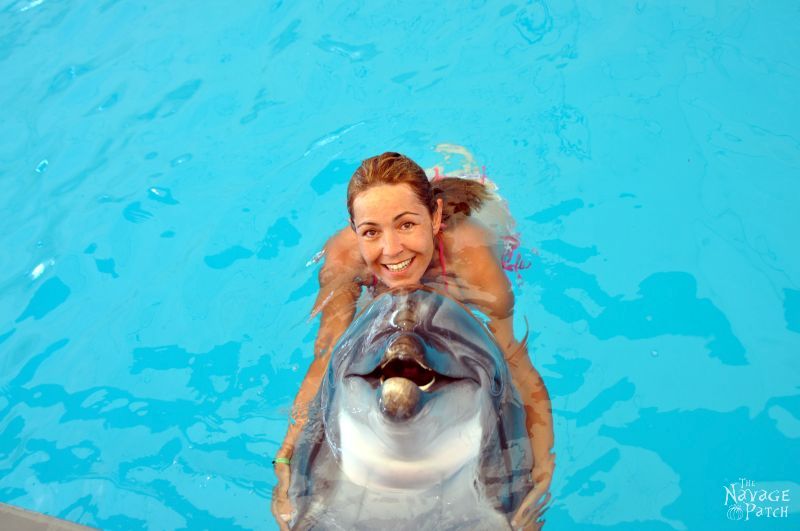 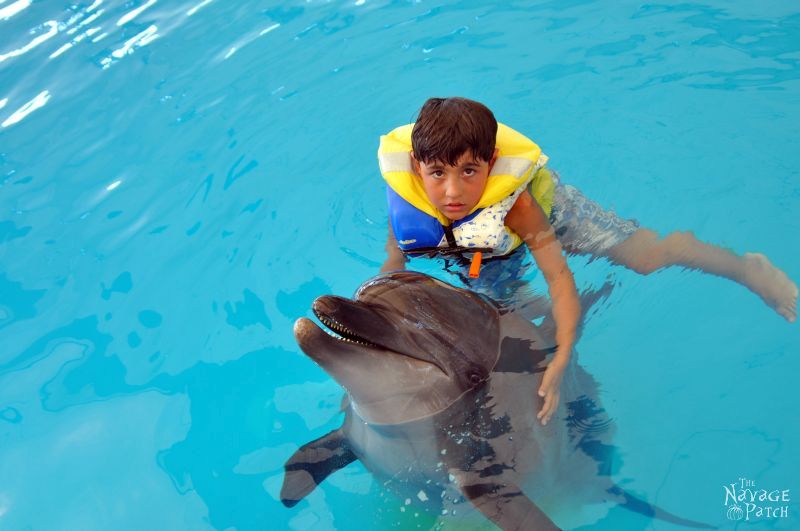 The photo shoot ended, and I was instructed to grab The Dolphin by the dorsal fin with two hands.

“Be sure to grab with TWO HANDS!” They ordered.

I grabbed, and the great beast shot forward like I inadvertently grabbed something more tender and precious. Now let me tell you what swimming with a dolphin was really like.

I had recently bought a new swimsuit, but they didn’t have one in exactly my size. I had to settle for either too tight or too loose. Of course, I chose too loose. During normal wear, it caused me no problems. But if I dove into a pool, it had a tendency to slide halfway down my butt. No biggie. A quick yank, and things were back to normal. But riding this dolphin was like an extended, minute-long dive. And the dolphin was fast. My suit shot past my ass and settled somewhere around my hamstrings. Shit. The Mighty Dolphin was parading my lily-white buttocks around the pool to the delight (and horror) of the entire Russian Federation. This was an awkward position I found myself in. Two-hands-on-the-fin be damned! I released my left hand, reached back and started tugging at my billowing suit. I struggled to keep a grip with my right hand, and these contortions caused me to swallow great draughts of pool water. Good god, how salty! And then it occurred to me, as I spun ’round this twisted aquatic merry-go-round, that this pool was filled with whale piss! I sputtered and gagged and tried to keep my shorts from shooting down past my ankles. This was no magical ride. This was hell.

Here is where things started to go wrong. 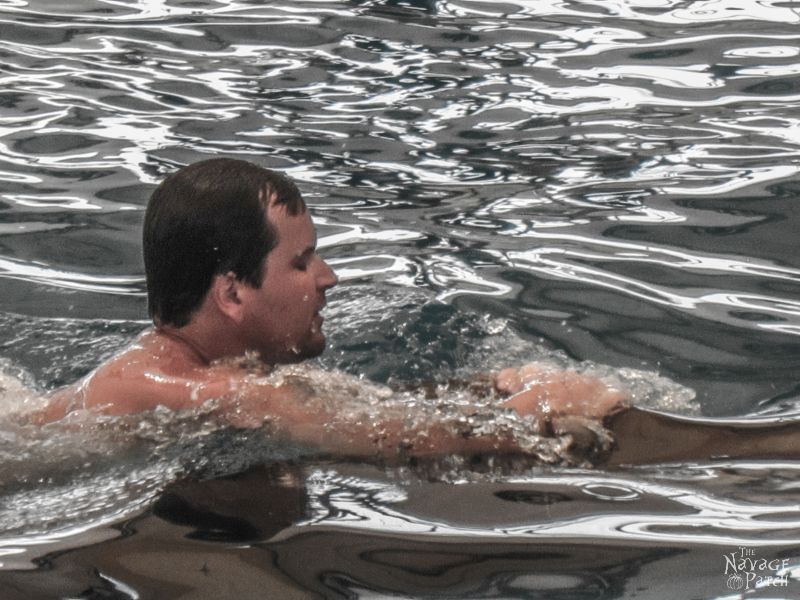 And here I am, desolate, desperate and alone in the black and hellish waters of the Antalya Aquarium. 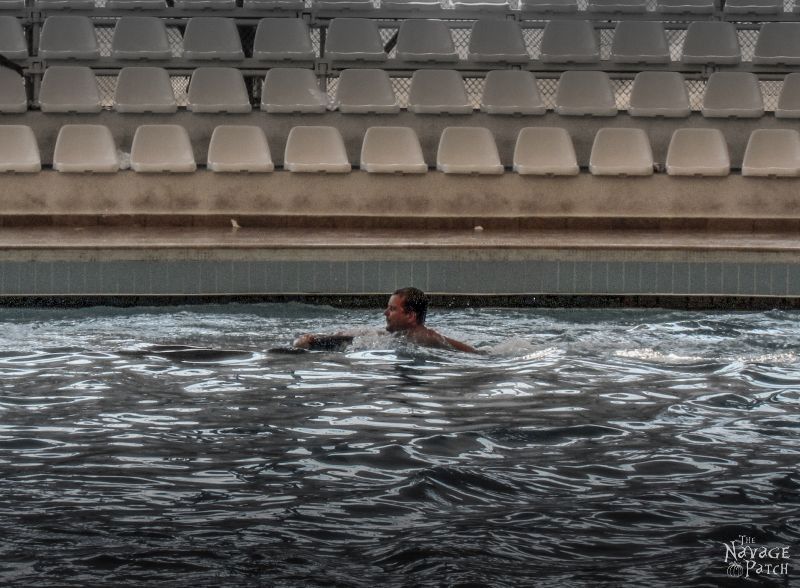 In stark contrast to my harrowing ordeal, Barish and Handan had great rides around the pool! 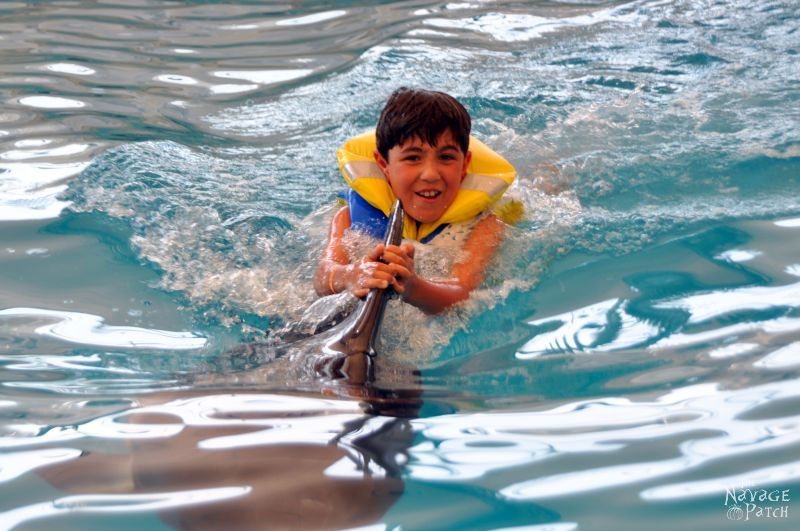 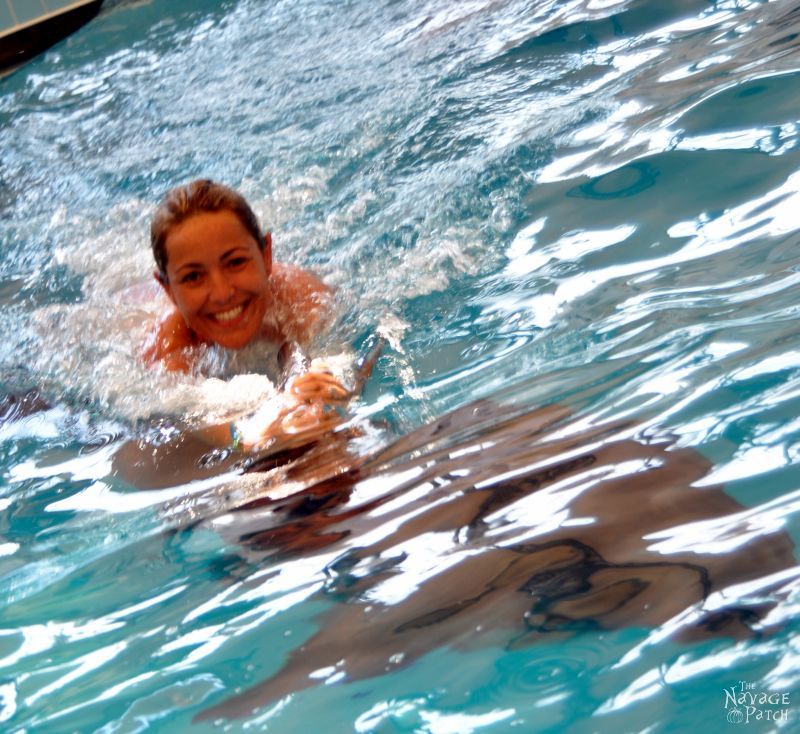 We boarded the shuttle bus for the ride back to the hotel, I, silent in my shame. The boy asked me for his iPod so he could play some games. We had given him the iPod that morning.

“I don’t have it.” I looked at Handan. She checked her bag.

“I don’t have it, either!” We both looked at Barish.

“Barish,” I said, “You never gave us your iPod. Where did you have it?”

He reached into the pocked of his bathing suit and pulled out a dripping iPod. We stared at it in disbelief. He burst into tears. We told him he was a dummy, but then told him it was okay. It was just a thing and could be replaced. No need for tears. The Great and Wonderful Dolphin may have been able to cure disease, but I’m pretty sure he couldn’t snarf a new iPod out of his blowhole. Ah well…

As I summed it up on Facebook that evening: 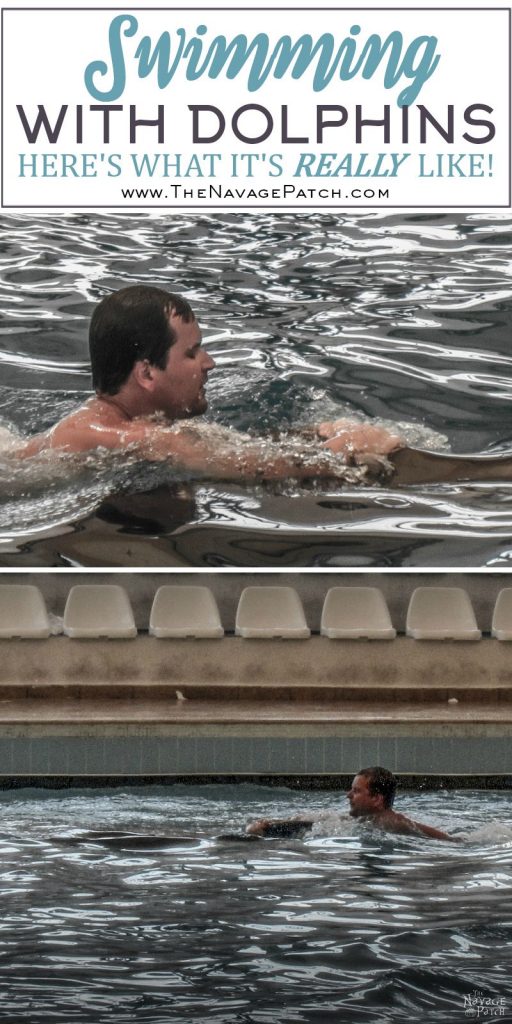