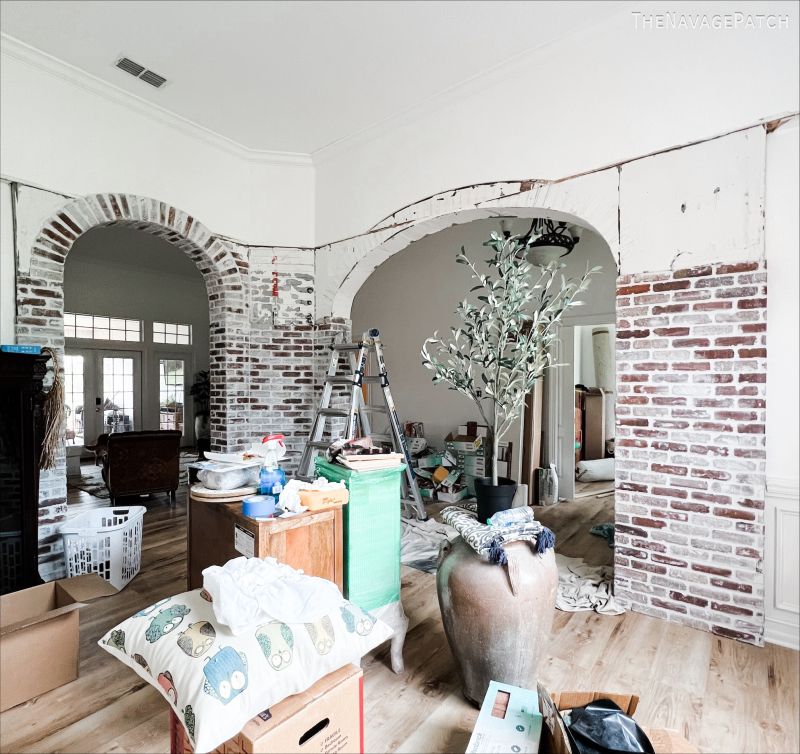 A thousand pink sunrises give way to a thousand golden sunsets.

Weeks melt into months, and months freeze into years.

But one thing rebels against the winds of change and stands immutable as the sands of time try to drag it down, away and into the past:

Never has there been such an enduring symbol of hope and despair – of salvation and damnation.

Will this be the year I finally conquer the list and complete all the objectives and reach the declared goals within the first three months?

Only the spirits know for sure, but this year, I’m putting my money on me. 2022 may have left me bruised and beaten, but I’m still standing, and I’m ready for more!

After the head-spinning year I’ve just stumbled out of, 2023 can only be summed up as…

So let’s have a look at what Q1 2023 holds in store for The Navage Patch and the patched-up Navage. If my crystal ball is worth the cardboard it came in, things are looking…busy!

But first, let’s recap what we did in our new Florida home since last April.

Three of the four remaining items are on my First Quarter Goals list, and who knows? I may just get those garage doors done, too!

Enough of the past – let’s look to the now and to the future!

Okay, look, the first goal is something of a fib, because we mostly finished it last month. But since I haven’t yet shared it here with you, we can all just tap our noses, wink twice and pretend it’s all brand new.

See how that works!

Yeah, yeah, I know! We gave his bedroom a makeover about a bajillion months ago when we first moved in. But that makeover ran longer than anticipated, so we decided to act like true politicians and kick the can down the road to be dealt with at a later date.

Welp, that date came a-knockin’ the week before Baris’s arrival home for Christmas break. One minute I was catching my first breath as a free man since moving here, as our Christmas posts were all in the can, and the next minute I was shuffling crap out of The Boy’s closet and dumping it on his bed.

(Someday madam. Someday I’ll sleep until the stars burn out.)

But until that day, I’ll do some makin’ over…starting with my son’s closet. Be on the lookout for the plan coming real soon.

This is a biggie, and one that is long overdue.

Florida is great and all. Fantastic, even! But its one fatal flaw is the horrifying absence of basements.

Look, I get it. Contrary to popular opinion, I’m not a complete moron. The groundwater is so close to the surface here if you drop a penny, you’re likely to create a small pond. Wait a hot minute, and your penny pond will start to attract frogs and alligators. With that much water so close to the surface, basements are a non-starter. Your entire house would bob to the surface like a cork unless the foundation failed first and flooded that beloved and sorely-missed lower half.

But people are people and crap is crap, so garages down here don’t hold cars, they hold the crap that should rightfully be stored (and forgotten) underground.

But then we have The Navage Crap, and that takes us right out of the bush league and plops us squarely in the big league. We got crap coming out of the wazoo, and most of it is crucial, vital and entirely useful crap that we need for our business.

This is an interesting one, because it will involve walling up a useless door. Here’s a shot from when we moved in from the flex room looking into the half bath.

The doorway I stood in to take the picture above will not survive the makeover. Really, there was no point to it in the first place. Why have two entrances to a bathroom so small, a man of my admittedly average stature can’t fully lie down in either direction? I’ve seen grasshoppers cross greater expanses than this bathroom floor.

I’ll remove that sliding door and make it a wall again. This is not only beneficial to the bathroom, but it’s essential to what we have planned in the flex room. But that’s a project for later in the year, so I’ll leave it at that.

This damn room is my albatross. It’s the thorn in my side that keeps worming its way deeper into my guts. It should have been completed by competent contractors.

Instead, we got Tom & Jerry, Laurel & Hardy, Abbott & Costello. Call them what you will, they were not bricklayers. They were The Three Stooges condensed into two hapless boobs who botched the brick job so bad we fired them after the fourth day of a job that should have been completed in three.

This was 7 months ago, and by now, I should have finished what they f!@#ked up. But I haven’t, and now all the glory and honor of completing the brickwork will be bestowed in 2023.

Here’s roughly how we stand.

The only difference is that since this photo was taken, we’ve set up all of our dining room furniture. Work on this wall will re-commence this month and hopefully finish in February.

The master closet situation is dire.

While the Georgia house afforded us both an equal allotment of storage space, in this house I have the tiny half. But that’s okay, because I never managed to fill the space I had in Georgia. As long as my babes can fit into her side, all will be well with the world.

Much like Baris’s closet, our master closet will marry some store-bought storage with a lot of custom-built closetry supplied by Yours Truly.

As usual, the wire shelving will be dismantled with glee and relegated the darkest corner of purgatory.

Fun fact: this house has not one, but two laundry room hookups! Currently, our machines reside just inside the garage house-entry door in a room that can best be described as a mud room.

But there are also hookups out in the garage.

Moving the machines out there will free up more valuable interior space that can be used for…wait for it…storage!

As a bonus, we’ll finally be able to vent the dryer outside as nature intended. This interior laundry room was an add-on, and the previous owners (and by extension, us) had been venting the dryer through the wall and under the stairs leading up to the craft room!

Man, people do some really weird shit when it comes to their houses.

Paint the Rest of the Downstairs

Slathered with a color I’ve now come to call “Boiled Frog,” the downstairs walls are starting to get on everyone’s nerves. It’s almost been a year, and we’re still staring at the same boiled frog green, day in and day out.

Of course, who am I to complain? As the Wallpainter-in-Chief around here, any and all bitching would have to be self-directed!

But of all the tasks on this first quarter list of goals, this one is probably the easiest, though also a bit time-consuming. There’s still a lot of frog-green real estate down here, but I’ll get it done and get it done before the quarter is out.

Run Power to and Paint the Lantern on the Garage

Who on earth installs a lantern…that’s not actually a lantern?? You know what, don’t answer that – I already know.

Well, it’s confirmed. I took the lantern down last weekend because I just couldn’t believe it wasn’t wired up. I figured there must be a short or something.

They hung a perfectly good lantern on a solid brick wall.

The facepalms are fast and furious around here.

So I’ll be cutting through the brick and installing a junction box. I’ve got a good electrician who will do the rest, and then I’ll paint that lantern, re-hang it, and we’ll finally have some light out there!

Okay, I think all this should keep me busy for a few months. I have a lot on my plate. It’s a good thing I’m hungry.

Let’s get to work!