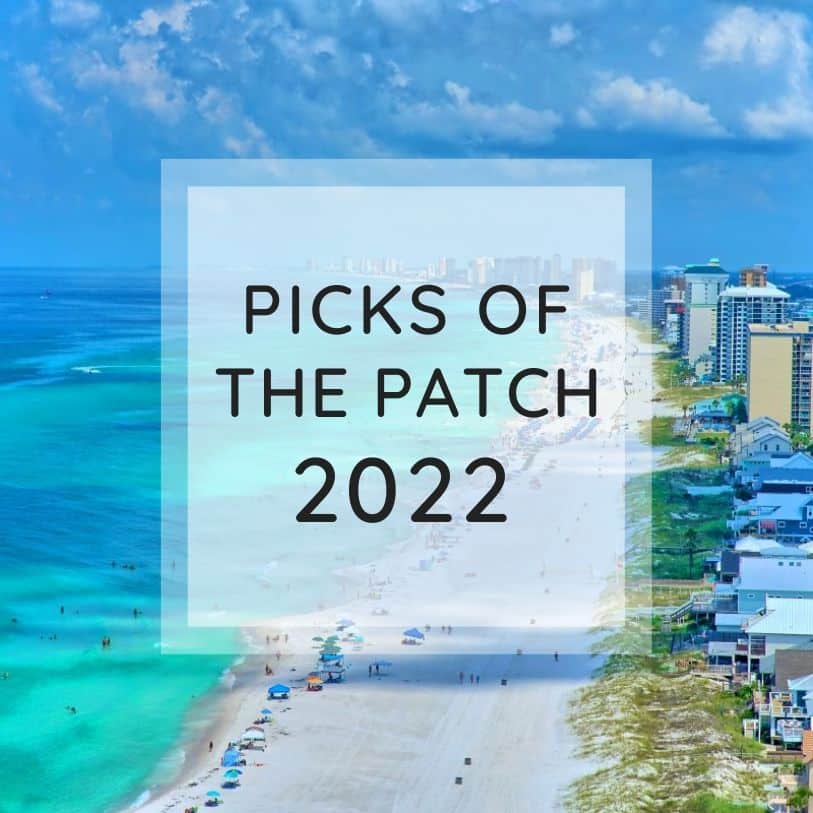 There are so many ways I could open this retrospective, but I guess the one that sums it up best on all fronts is “what a difference a year makes!”

Unlike every other new year we’ve spent in America, 2022 started bright and sunny with temperatures in the low 80s. We were living in Jacksonville, Florida, but that sunny start to the year belied an uncertain future.

At first, it seemed like some backwater burg – neither of us had ever been to the Panhandle, nor did we know anything about it.

Then we learned about the Emerald Coast, and Destin’s reputation as its premier vacation destination.

And then we went there and saw it.

Nothing, nothing is as beautiful as the Gulf of Mexico on a sunny morning. It’s called the Emerald Coast for a very good reason.

January and February were a blur of packing up our Jacksonville apartment and moving the contents into storage, packing up our Georgia house and putting its contents into storage and dashing around the Emerald Coast in search of real estate that didn’t have a 7-figure price tag. It’s gut-wrenching to think that if we moved here only a year before, we could have bought any house in the region for half the price!

But we found a house at last, and in the last week of March, we moved into our new home in the small-but-rapidly-growing town of Freeport.

This was our first time living on a golf course, and our second time with an HOA, and they both come with a lot of rules.

While I familiarized myself with the intricacies, subtleties and absurdities of the arcane nonsense that comprises our Covenants (aka Stupid Rules You Must Obey), I began to tackle the mega-project known as our home.

My first order of business was to create a functioning craft room. Without that, I was somewhat dead in the water as far as crafting goes. One of the main reasons we chose this house was because of this large space over the garage.

But before the white paint was dry on those frog-green walls, my babes pulled me off my number one priority and set me to work on a pantry makeover.

In her defense, the pantry was a colossal waste of space, and the boxes strewn about the kitchen were becoming an eyesore.

So I put the craft room on hold and focused my efforts on making a proper pantry of this wire-shelved disaster.

Proving once again there’s no problem good shelving can’t solve, my new pantry has more than enough storage space for me, my salt collection and whatever else I want to stash in there.

Fair warning though – my babes is already whispering of another pantry makeover, so be on the lookout for that sometime in 2023!

With the food finally stored and pantry order restored, I could once again turn my attention back up to the craft room. With massive amounts of organizational help from Handan, I at last had a place to craft and create.

Following hot on the heels of the pantry and craft room makeovers was Baris’s bedroom makeover. We started it a week before he returned home from college, but it took just a little longer than that to finish. But hey, he at least had a bed to sleep on when he arrived! All the rest fell into place quickly after that. His room makeover spawned a few beautiful projects, and all can be found in the big reveal.

While I worked on Baris’s bedroom, we were also having some work done in our dining room.

This is the project that has become a thorn in my side, as it still isn’t finished as I write this.

It was a simple concept – hire a contractor to remove some columns and put up a wall…then put brick on that wall.

And it started well enough – we removed the columns without collapsing the house, the walls went up reasonably well. We even created archways!

But then the tilers came in, and the whole job went to shit.

After 4 days of constant errors, sloppy work, a sloppier job site and unfollowed instructions, we told them not to come back the next day. I’ve since spent a bit of time trying to fix and finish what they started, but since August, we’ve been so busy with the Halloween/Christmas season that I haven’t had much of a chance to tackle the work. As I write this on Christmas Day, I hope to get some bricks installed this afternoon and the rest of the job finished early in the new year. I’d say I’d get it done by the new year, but we’re working on a garage workshop makeover that will take every free moment until the first week of January.

I started this post with “what a difference a year makes!” And besides the obvious move, this statement also refers to the biggest success The Navage Patch enjoyed in 2022: social media.

I’d long opposed making video content because I was a man of The Written Word. I also preferred still photos over moving pictures. But I’m also not a complete moron, much to the disbelief of many around me.

The winds of change have been blowing for quite some time, and I held out as long as I could, a stalwart and stupid ship’s captain lashed to the mast as his ship barrels headlong into a maelstrom.

Short-form video is here to stay, and it was either jump on the bandwagon or get left behind forever.

Handan pushed me into the Instagram game back in 2021, and I trudged and plodded through the motions of making short videos and then spending hours looking for just the right music that would propel the video into the good graces of Instagram’s algorithm.

Last year I wrote the following words at the end of my Picks of the Patch 2021 post:

This was the year that we made a concerted effort to beef up our Instagram game. And this was also the year that we joined the Wild West of TikTok. Our most-loved Instagram Reel of the year (and pretty-well-liked on the blog) was this shag tree pillow I made for my babes.

The Instagram Reel I referred to racked up a then-impressive 20,000 views. It was double its closest competitor, and it was by far my greatest social media victory. To put the number in perspective, my TikTok videos at the time were sometimes racking up views that numbered in the dozens after several weeks on the platform.

I thought things were going okay, but I also knew that things were far from okay. We had 10,000 followers on Instagram and about 200 followers on TikTok. The videos I made were snoozefests of the very highest order, and I blanched at the thought of making more.

I chose change, and then everything changed.

Instead of searching for hours for the right music for every Reel and TikTok, I decided to put a voiceover to the videos. I’d been reluctant to do this because I’d hated the sound of my own voice since I first heard myself on tape back in the 80s. But as I said, something needed to change, so I started to speak how I would write – not how I would necessarily converse in real time.

And that was the golden ticket.

I first tried the new approach on TikTok with part 1 of a 3-part series about our DIY Halloween Chandelier.

It worked better than I could have dreamed! At the time, we had about 1000 followers on TikTok, and most videos would get a few hundred or maybe 1000 views.

This video got 4.5 million views.

It forced me to reconsider my voice and my lifelong aversion to the way it sounds.

From then on, every project and craft was packaged for social media with a voiceover. The formula also worked on Instagram. That 20,000 views I was so proud of in 2021 has now become 7.5 million views for this video about our DIY Dollar Tree Mop Ghosts (I’m posting the TikTok version so you can watch it here in this browser:

Our videos on social media have fueled fantastic growth since August:

And this growth has kept us busier than a one-legged man in an ass-kicking contest. Between the projects and crafts we’re making, the blog, social media and answering countless thousands of comments, there was little time for much of anything else since summer.

So of course my babes thought it was just the perfect time to enter me into One Room Challenge!

Obviously, what more could I ask for than to be caught up in the tornado of social media growth and then tossed to the snarling wolves of Interior Design?

It was every 50-year-old man’s dream!

So with one hand I was pumping out seasonal crafts, like this cute little macrame ghost.

But that’s not all! That hand was also busy making a full-sized cemetery for our yard! This is one you haven’t yet seen here on the blog (I’ll be posting all about it next year), but I did post about it a few times on social media.

And let’s not forget the Witch-O-Lantern display! My hand was pretty busy hauling my carcass up and down the ladder installing that!

One Room Challenge ended shortly after Halloween, but any thoughts of relaxing and loafing around with a few dry martinis withered and died with the onset of the Christmas season.

I’d escaped the frying pan and landed squarely in the fire.

Though I may not have relaxed as much as I would have liked, this was a crafty Christmas like no other around here. Not only did we have the Craft Machine (me) working overtime creating all sorts of goodies for inside our home, but we also turned our eyes outside for the first time in a very long time.

Of those small interior crafts, three stand out above the rest for their simplicity and price. These are all Dollar Tree crafts costing anywhere from $1.25 to about $4, but they look like so much more than their price tags suggest.

The first were these DIY Dollar Tree Duster Trees.

The duster trees were followed by our DIY Dollar Tree Honeycomb Trees.

Our Dollar Tree Christmas trifecta is rounded out by these light-up wood stars. This one was the biggest hit of them all, and for good reason! They are stunning.

Outside, we didn’t go as crazy as we did for Halloween, but we did manage to make a huge FA LA LA sign for the front yard, in front of which we put some log carolers (both coming next year on the blog), our jumbo jingle bell, and our big melting snowman.

All in all, it was a busy, hectic, chaotic and successful year. In early 2023, we’ll be working to get the house in shape before the Halloween and Christmas craziness starts up again in August. I’ll be back here in early January with 2023 goals list. All I can say is that there are some whoppers on it!

Until then, keep warm, stay healthy, drink a martini and ring in the new year with a smile. You never know what each new year will bring, and I have a feeling this could be your year.