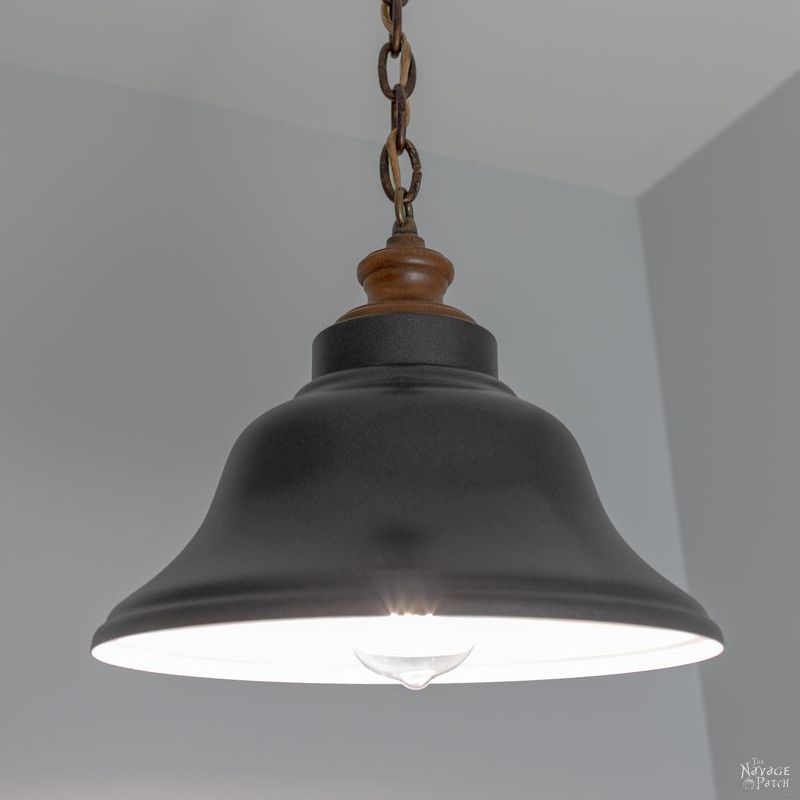 In this pendant light makeover, we turn a found utility light into a beautiful addition to our newly-renovated laundry room!

So apparently I’m not a good judge of what you fine ladies look for in a DIY project.

In other words, I know nuthin’!

But you already knew that, didn’t you?

At least, you must have suspected it, right?

Let’s rewind a bit and have a look back through the years.

When The Navage Patch was only a couple of months old – still tottering around cyberspace on wobbly and unsure legs and occasionally crapping itself – Handan suggested I make a cutting board tutorial post.

I told her in no uncertain terms that she was nuttier than a squirrel’s pantry.

I told her that everyone (and quite possibly their mothers and cousins-twice-removed) had already done a cutting board tutorial.

The subject was over-saturated and the topic was closed…as far as I was concerned.

And then she did that thing.

The thing with the finger.

No, not the bird!

And so off I went to make another board.

And then off I went to write about it.

And then it went a little viral.

Okay, fine. Anyone can be right once.

But then there was that time I started cleaning the shed with Barish one Saturday morning, and then Handan came running out with a camera to document the cleaning and reorganizing for a blog post she wanted me to write.

I again informed her that she was battier than Bracken Cave. No one in their sound and sane mind would want to waste precious moments of their life reading about cleaning and organizing a garden shed!

The idea was patently absurd, and I wanted none of it!

She gave me that look.

You know the one!

And so I wrote the post, and hey, guess what? You guys gobbled it up like ambrosia!

She’d never get a third.

I told her these things were too simple! No one would care!

And now it’s one of our top posts of all time.

I assured her with all the surety I could muster that this mirror didn’t qualify as a project because I barely did anything to it!

But did that stop you guys from going gaga over it?

And therefore, I’m forced to conclude that I have no earthly idea what I’m even doing here!

So when Handan asked me to write a post about the light I hung in the laundry room annex, I once again informed her that she was loonier than Lake Ontario on a foggy summer sunrise.

But then I stopped and considered.

After all, I’m the dummy who never learns from his mistakes.

Maybe she isn’t screwier than a twist-off at a pop-top convention.

So without further delay (because this is exactly what I’ve been doing for the last 500 words), I give you…[trumpets blaring]

Back in the Great Before, in the time of the Old Laundry Room, the top of the basement stairs was a separate entity than the laundry room / mud room. It existed in a world of perpetual yellowed ugly, lit by a single bare bulb set into an old porcelain utility fixture.

We merely brought unsuspecting children into that room and then, with a bent finger and a crooked smile, we’d point up towards the bulb.

The children’s eyes would drift upward, unsure, but trusting.

And then they would see it, and they would run back to their mommies, teardrops splashing on the floor behind them.

When we decided to renovate the laundry, we annexed the top of the basement stairs.

We put in a pocket door.

We painted the walls.

We hung the mirror you all loved so much (thank you for all of your wonderful comments, by the way!)

We knew the bulb had to go. We knew we wanted a pendant light.

We looked and looked, but nothing caught our eye. Nothing that didn’t cost a small fortune, anyway.

But this was kinda sorta the basement…so spending a ton of dough didn’t make a lot of sense.

And that’s when my wife had an epiphany.

As usually happens at such times, she leaped out of her chair without a word and ran down to the basement like a graceful gazelle.

I stayed upstairs. For safety.

After some banging and clanking, she floated back up the stairs holding an old hanging utility lamp that she had found at the Put & Take sometime in the past few years.

How she knows where all this crap is stored in the basement, I’ll never understand.

Her mind is like a steel trap inside an iron vault.

She plopped the thing down in my lap and informed me that I’d be giving it a makeover and hanging it in the laundry room annex.

If my babes wanted me to makeover an old pendant light, who was I to argue?

I got to work. Here’s how it looked when she pulled it from its storage cubby.

It was a plain, serviceable lamp – nothing more, nothing less. It still worked just fine, but it needed some dressing up if it was going to fit into the new-and-improved laundry room.

I started by taking it apart – pretty much the standard first step to everything.

The fixture was the old ceramic type they don’t really make much anymore. You can’t find them at Home Depot, anyway. I decided to keep it on hand. I might need it if I wasn’t able to find a suitable replacement (spoiler alert: I wasn’t).

This pendant light makeover really just required a new paint job and something to hang it with. Simple Stupid – just the way I like it!

Handan thought oil-rubbed bronze would look good. I agreed, as it would complement the other hardware in the room.

After the paint had dried, I took it downstairs, reassembled it and thought about how to hang it.

Back in the spring when we started the dining room makeover, one of our first priorities was a new chandelier for the dining table I built. Now, we have some pretty high ceilings, but that chandelier came with enough chain that we could have opened a hole in the dining room floor and hung that light down near the basement floor. I don’t know who needs that much chain, but you can be sure that when Handan saw all the excess, she was all, “Oh hell yeah! Don’t throw that away, my babes! That’s awesome chain.”

Okay, maybe she didn’t say “Oh hell yeah!” But you get the point. The woman loves leftovers!

I took the light and the chain to the annex and measured how many links I’d need.

Then I pried the first link open with pliers.

I slipped the link through the ring at the top of the lamp.

Then I squeezed the link back together. Look, this is all very complicated. Are you sure you’re following?

The original wire was not only intact and sound – it was damn good wire – so I threaded it back through the chain.

It was time to hang our new DIY pendant light. Once I figured out how much slack wire I’d need, I trimmed the rest and exposed the ends of the wire. And here’s the part where I need to tell you Don’t Try This at Home! This is America. People get sued for serving coffee that’s too hot. Remember that one? Cost McDonald’s a fortune! All because the cup didn’t have a written warning telling that woman that the hot coffee she was about to enjoy was, in fact, hot! When it comes to this fine country, I find myself shaking my head in disbelief so often that Handan thinks I have developed a nervous tic.

Anyway, don’t play with matches, don’t talk to strangers and don’t do your own electrical work. Make some other jerk do it…just like Handan does with me!

Now where was I?

Oh, yeah. I rewired the pendant light and hung it in its new home. But I scraped my knuckle against the ceiling while doing so, and that caused me tremendous emotional distress, so I’m thinking about suing U.S. Gypsum for not having a written warning on their drywall panels that it is possible to bump into them while working.

It was about here that Handan started laughing at me and taking more pictures.

Apparently I looked serious and worried, which she thought was hysterical.

I endured her heckling and finished the job.

The bulb we used is a vintage style LED, but in a more natural daylight temperature than the saturated yellow vintage bulbs that make everyone under them look like extras on The Simpsons.

And more of my wife trying desperately to catch me looking dorkish. It’s not hard, you know. Pretty much point and click, and odds are, you’ll catch some dorkery.

And here you have it folks, the DIY pendant light makeover that I thought was too simple to write about!

It was a little difficult to take a decent picture of it since it was hanging up near the ceiling in a tiny room, but I think it looks awesome in its new home.