From the Millennium Falcon to the AT-AT Walker, these 10+ awesome Star Wars blueprints are sure to please the Star Wars fan in your life! As always, these Star Wars printables are offered to you absolutely free, so fire up your Speeder Bikes and let’s get printing!

I was a Star Wars child.

The first movie was released when I was five. I probably first saw it when I was seven. Then came The Empire Strikes Back, and I was hooked for life.

There is magic in those first three movies.

Ask any kid who grew up with them.

I knew they were movies.

I knew the actors were real people in the real world.

But I wanted that far-off galaxy also to be real, so I let myself believe in it.

I let myself be the character, in most cases, Luke Skywalker.

I leaned into the evening breeze on Tatooine and stared into the distance as the twin suns settled into the horizon.

I ran through the dank and mist-shrouded swamps of Dagobah with Yoda on my back.

I flew my Snowspeeder over the frozen plains of Hoth as AT-AT Walkers lumbered towards the hidden rebel base.

You know, if I had to do it all over again, I’d probably pick Han Solo as my go-to guy.

I never realized as a kid that Luke essentially whines his way through the entire first movie and half of the second.

But Han was cool from the moment he walked on screen.

Anyway, the childish euphoria waned over the years. I don’t wear Star Wars shirts, spout arcane facts and lore about the Star Wars universe to any and all who’ll listen, nor do I camp out for tickets before each new installment.

No, I quietly carry my Star Wars torch inside me.

Because I remember the magic.

I never forget the magic. So when Handan told me we were going to issue a set of 10 free Star Wars Blueprints just in time for the holiday season, my heart flipped for joy.

This is Star Wars!

And these are Star Wars Printables!

Jeezum Crow, people. I’m getting all goosebumpy over here!

Okay, enough of my sentimental gibberish – let’s get on with the free Star Wars Blueprints!

I hardly know how to begin.

I want to throw them all at you at once.

But order and decorum must prevail, so I will present these freakin’ awesome Star Wars printables to you chronologically, by movie.

And, hey! That means we get to lead off with the Millennium Falcon! This is the coolest ship in any universe. It’s one of the fastest ships in the galaxy, and it can outrun an Imperial Star Destroyer.

Can your beloved Prius do that? 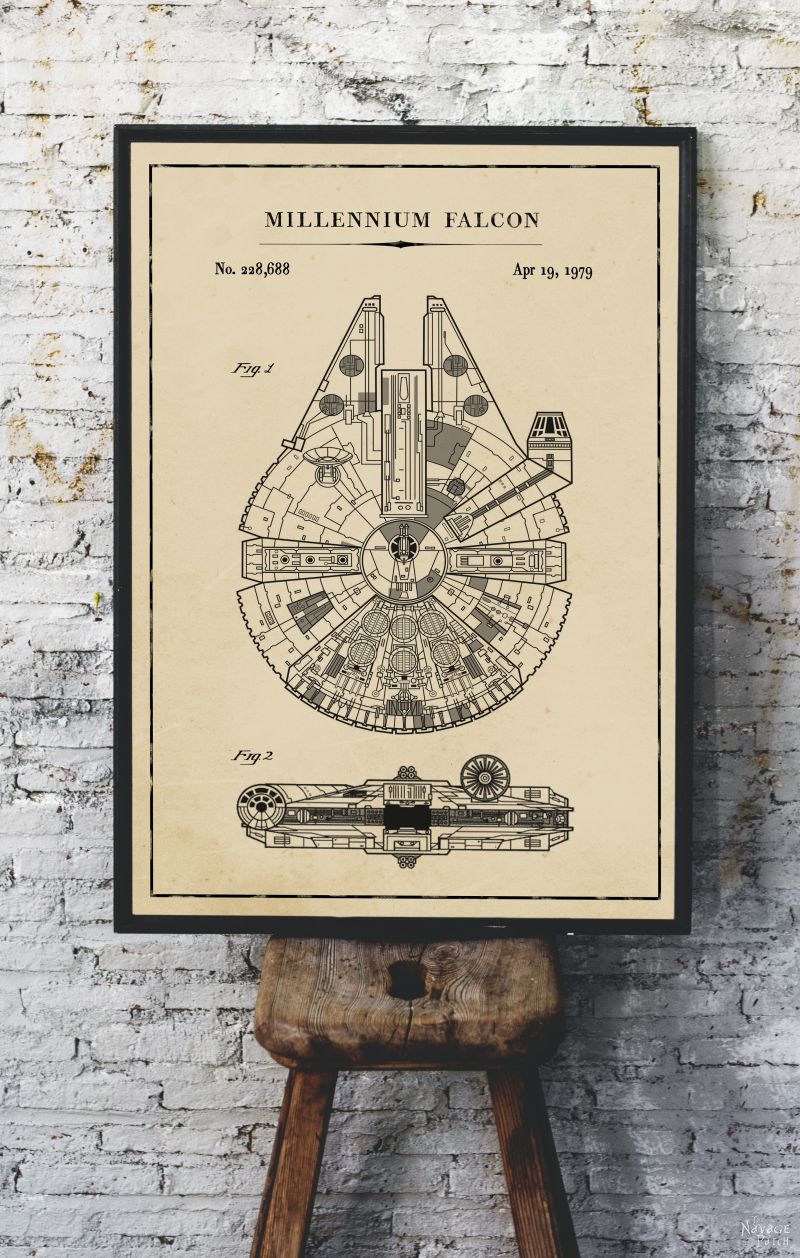 There’s something about the Millennium Falcon – it seems to attract TIE Fighters like flies to honey. Good thing Han upgraded the weapons system!

Oh, fun fact: the “TIE” in “TIE Fighter” stands for “Twin Ion Engine.” It’s not named “TIE” because the ship looks like a bow tie that launched off of some dude’s tuxedo. 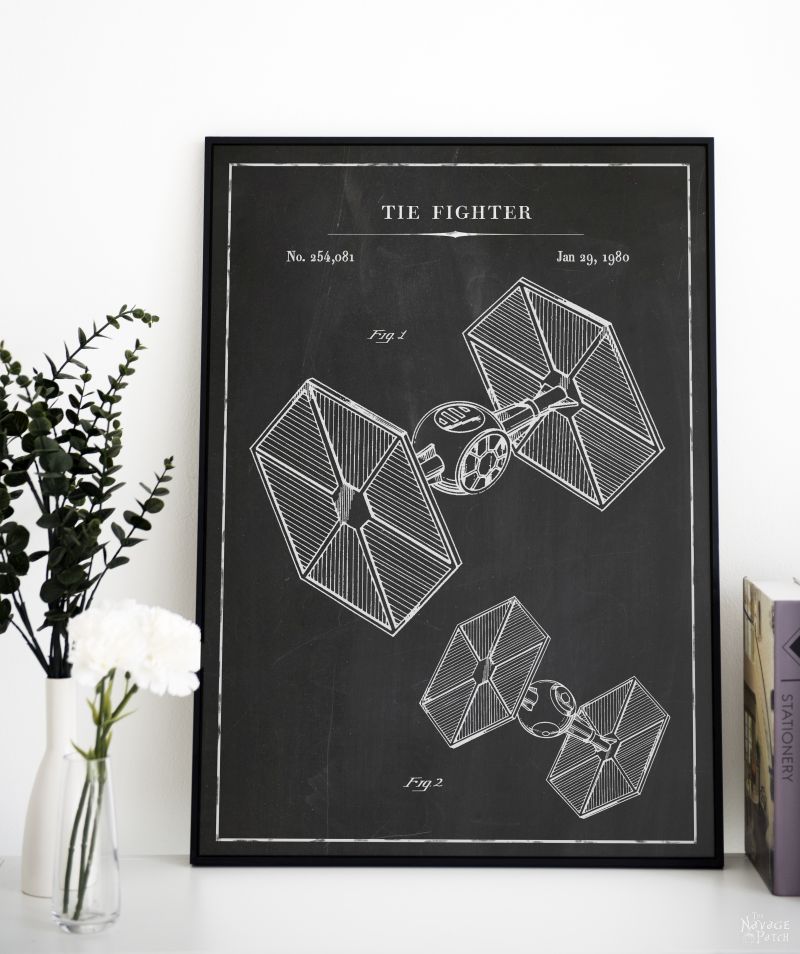 Once Luke has whined his way off of Tatooine and joined the rebellion, he is somehow given the keys to fly an X-Wing Fighter on a coordinated attack on the Death Star. Never mind that he’d never flown one before. Who needs training when you have The Force, right?

He flew admirably, plunked a few TIE Fighters and blew that Death Star to smithereens. 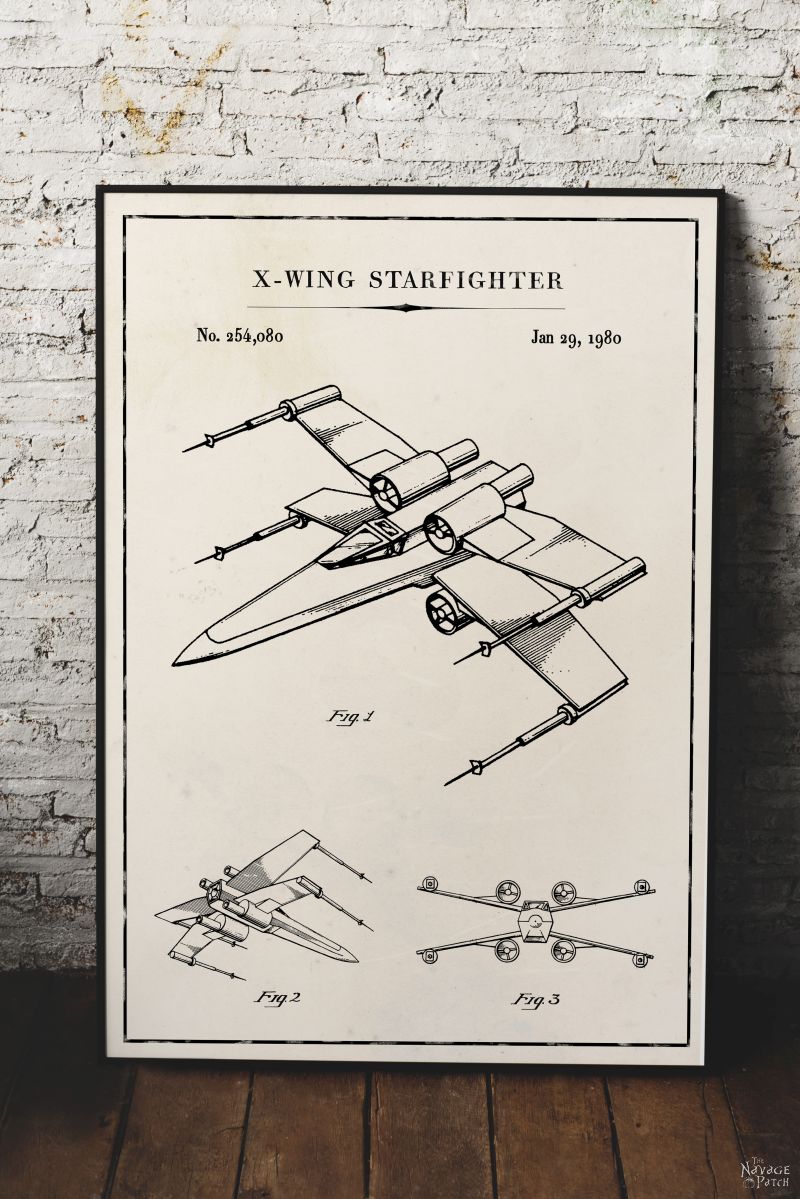 Whereas TIE Fighters are highly-maneuverable and generally attack in swarms, TIE Bombers are the lumbering bigger brothers mainly used to carpet-bomb capital ships and planet settlements. The Empire doesn’t take crap from anyone and adheres to a strict “Bomb First, Ask Questions Later” philosophy. If you don’t agree with their policy, you are clearly a rebel scum and must be eradicated from the galaxy. 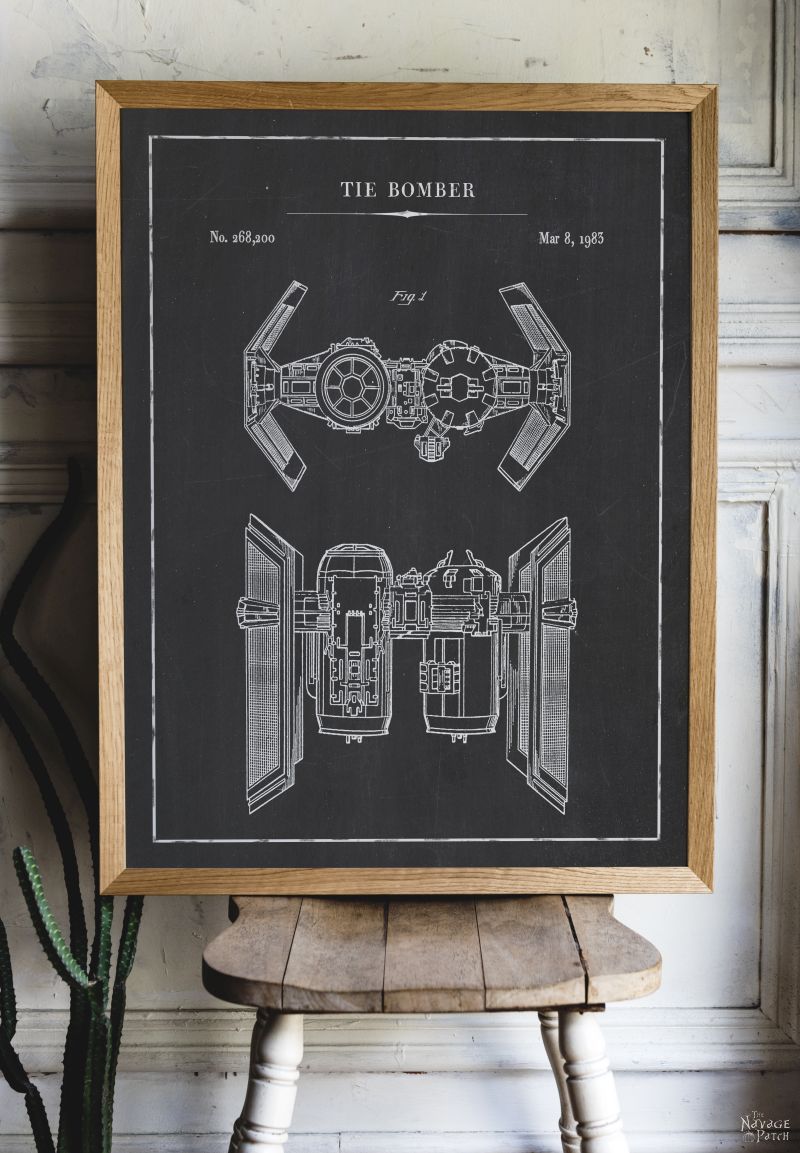 The Empire Strikes Back opens on the ice planet Hoth where the rebels have a hidden base. The Empire is searching for them using their Imperial Probe Droids which they’ve scattered among all the known planetary systems.

Luke and Han happen upon the probe on Hoth and blast it to bits.

Unfortunately for the rebels, it had already relayed its findings… 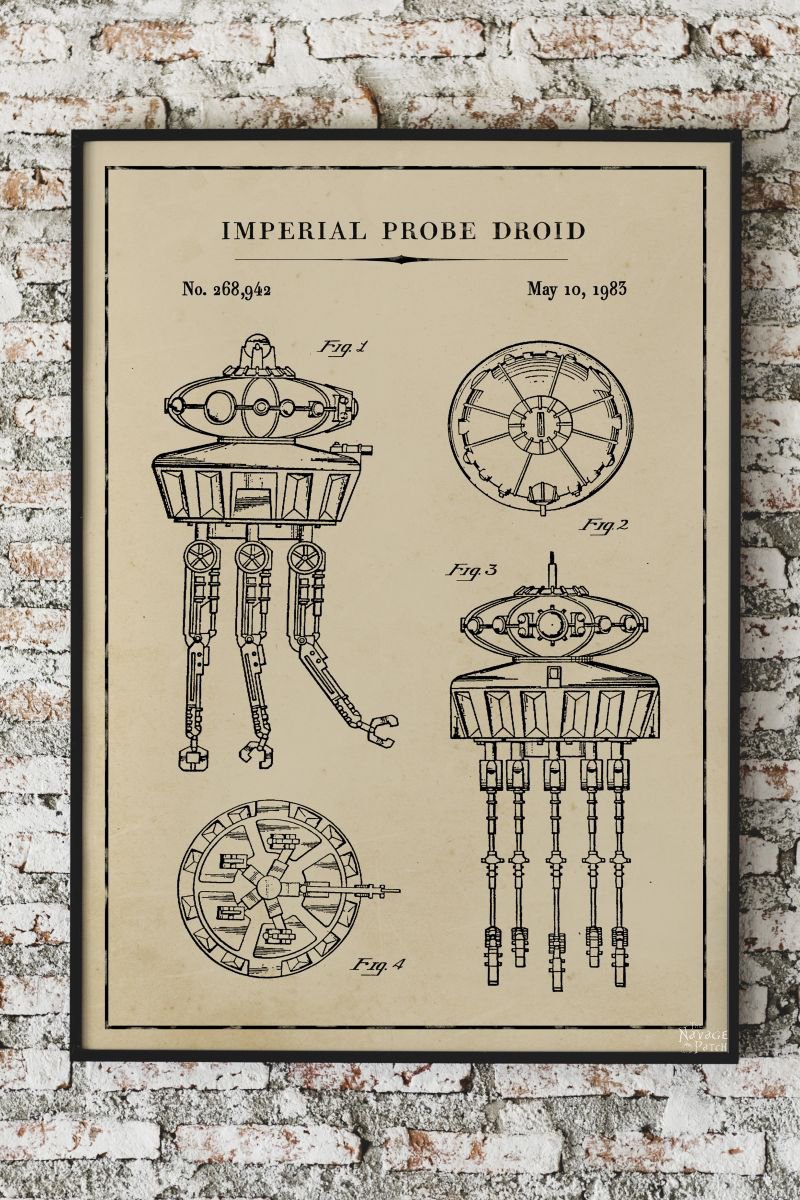 Not long after the probe reported the presence of the rebel base, The Empire launched an all-out ground offensive against the rebels using one of the coolest machines in the Star Wars universe, the AT-AT Walker.

The All Terrain Armored Transport looks a bit like a giraffe with no neck. How this thing ever made it through the design phase rather boggles the mind, but hey, who am I to second guess Space Engineers from another galaxy, right? 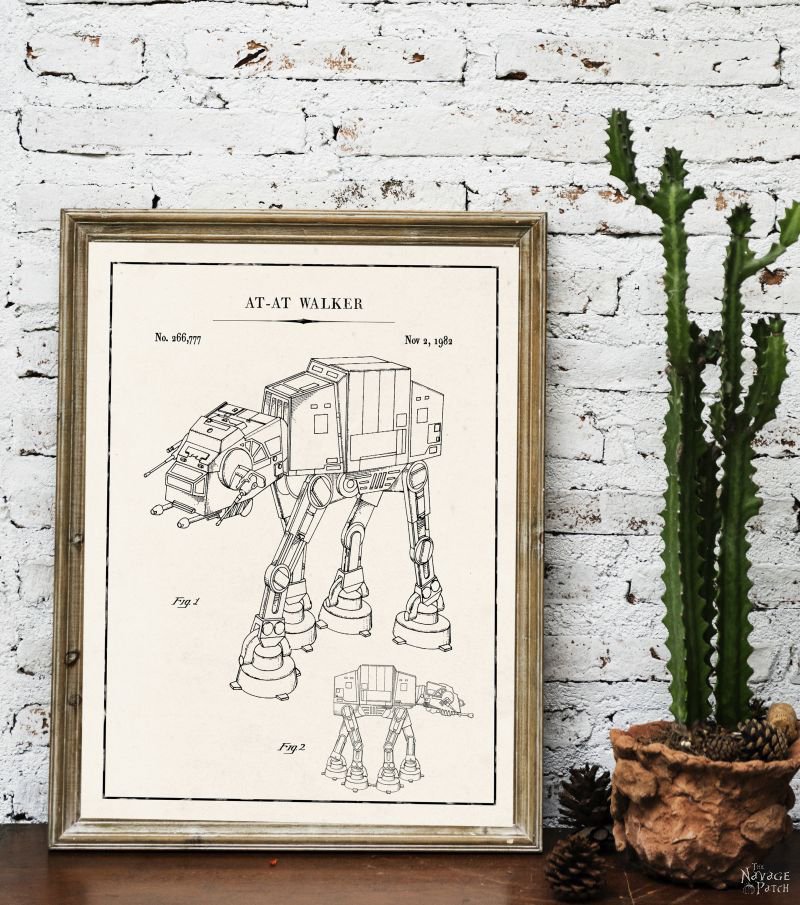 Good thing the rebels outfitted their Snowspeeders with a harpoon canon! Blasters couldn’t stop the AT-AT Walkers, so what’s the best way to take down something that’s all leg? Yep, trip it! The Snowspeeder vs AT-AT scene is still one of my favorite of all the movies to date! 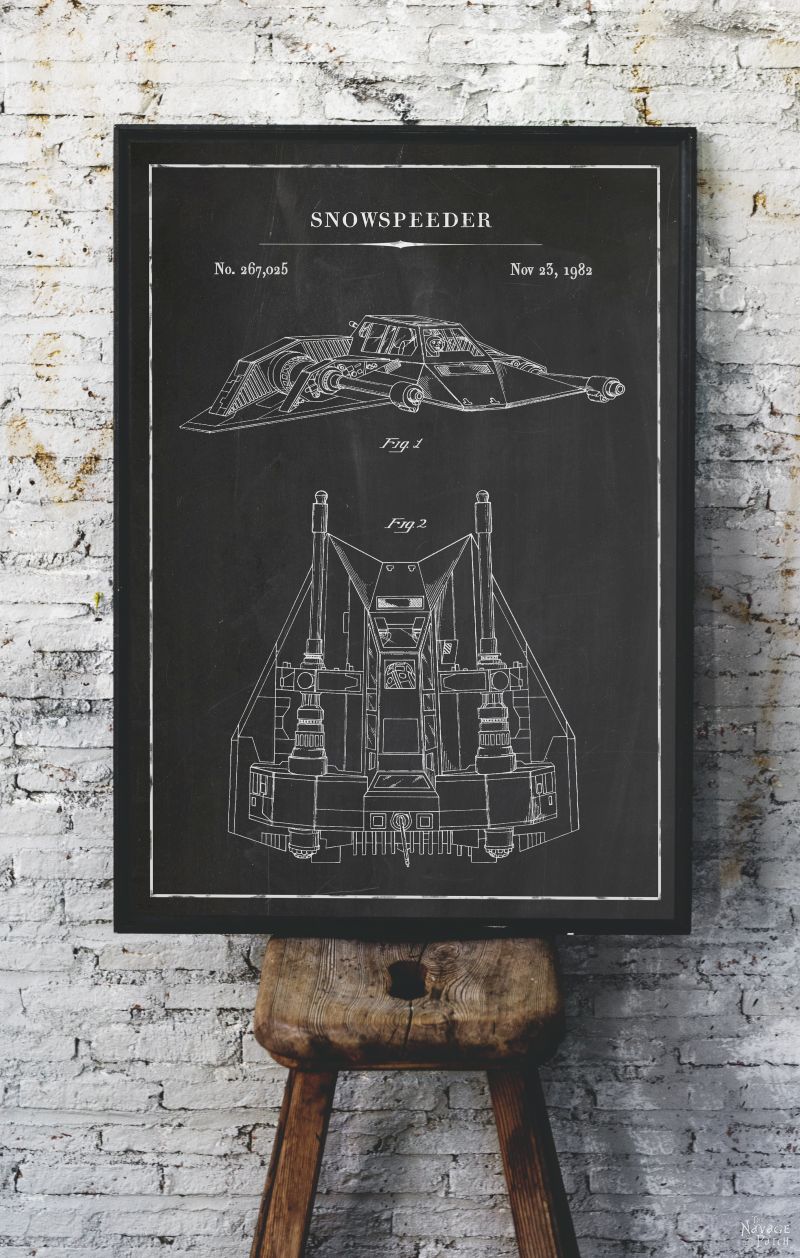 Later on in The Empire Strikes Back, we get our first glimpse of an Imperial Shuttle – a beautiful ship that belies the menacing design philosophy that seems to govern most Imperial machines. 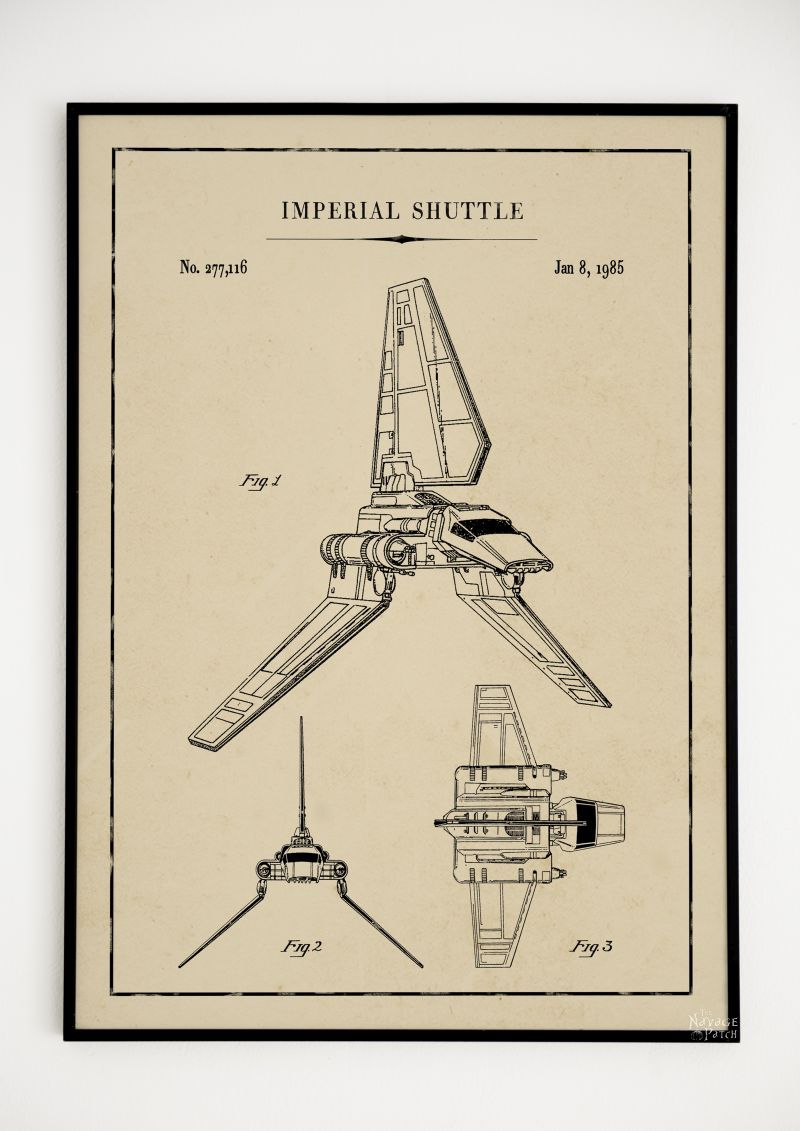 Without question, the most badass character is the bounty hunter, Boba Fett. He deserved a much better death than the one he was handed in Return of the Jedi, though. Falling into the jaws of a great sand beast while screaming like a little girl is such an insult to his coolness. Meh, what can you do?

He had an awesome ship, too. I had it as a kid and always thought it looked like an iron. Looking again, it also bears a striking resemblance to a street light!

And that brings us to our final Star Wars blueprint – the Speeder Bike. This is the kind of ride we need here on Earth. As a motorcycle rider, there’s nothing I’d like more than to leave the road behind and gain a little altitude over the cars below.

Still waiting for our engineers to figure this one out!

Those were some pretty awesome free Star Wars printables, wouldn’t you agree?

Now it’s time to click on the button below to download today’s free printable Star Wars Blueprints – they are all in the Patent Art section of The VIP Patch. 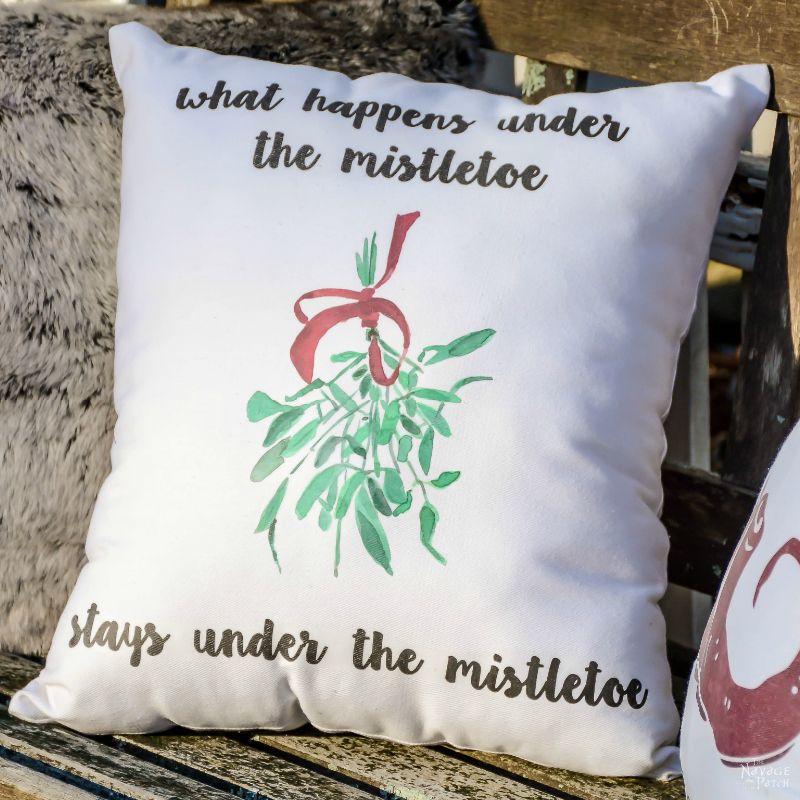 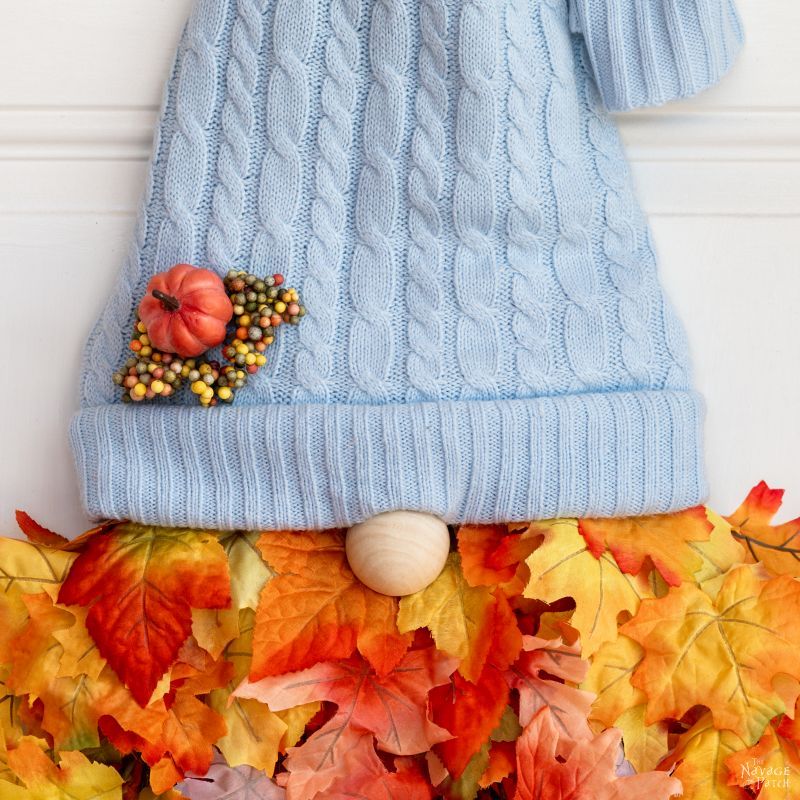 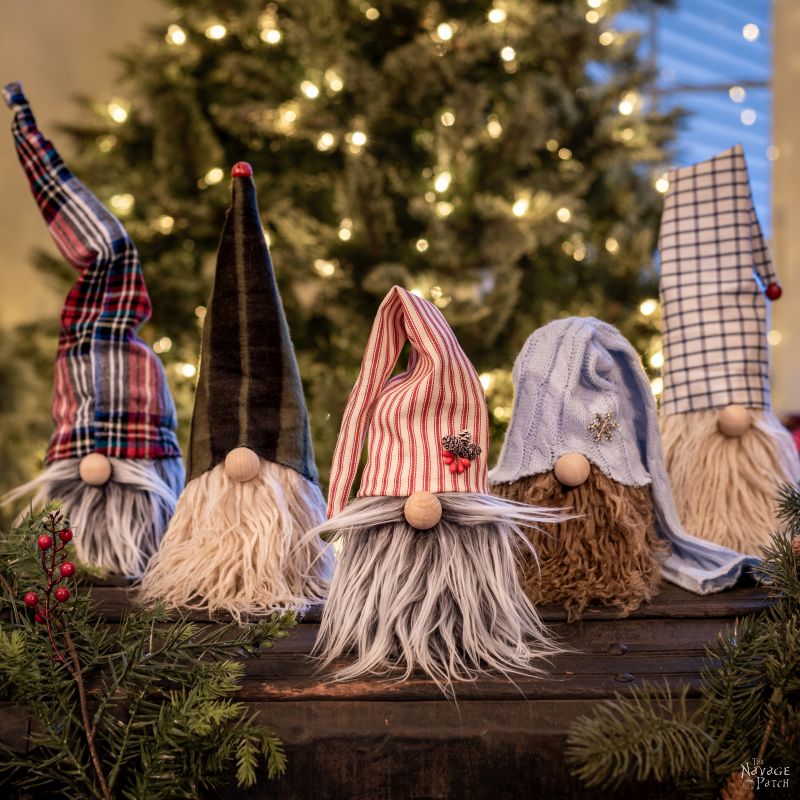 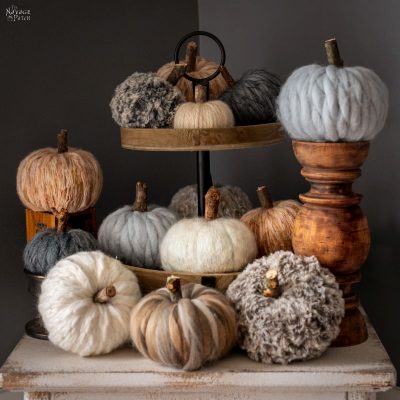 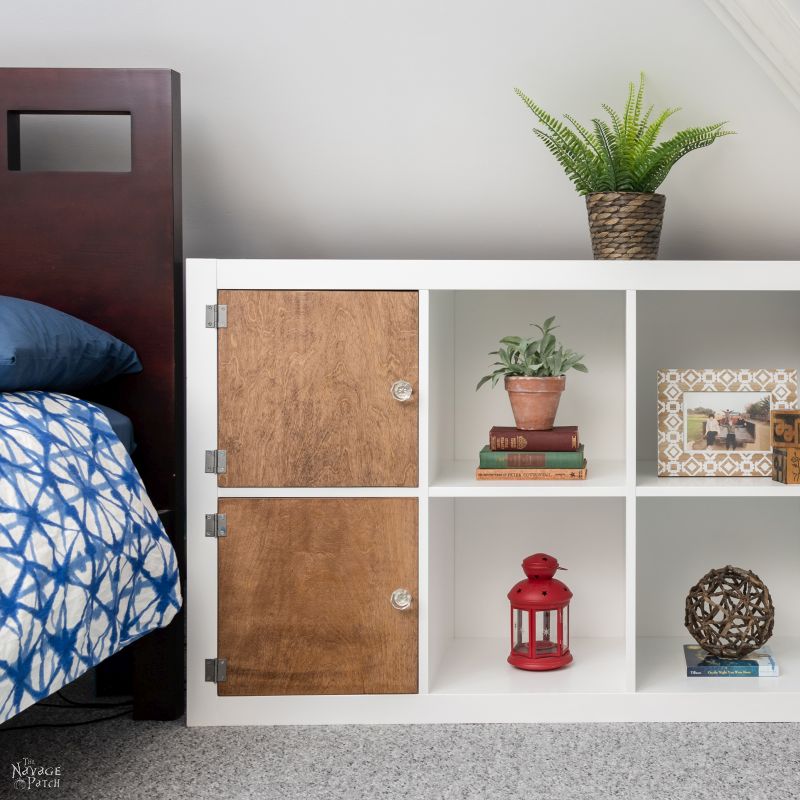 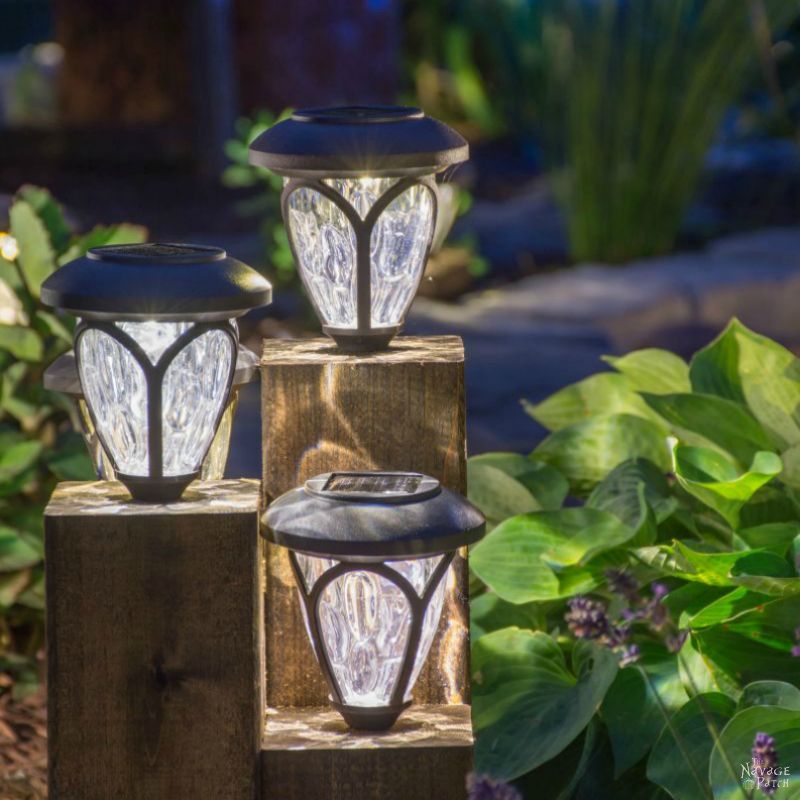 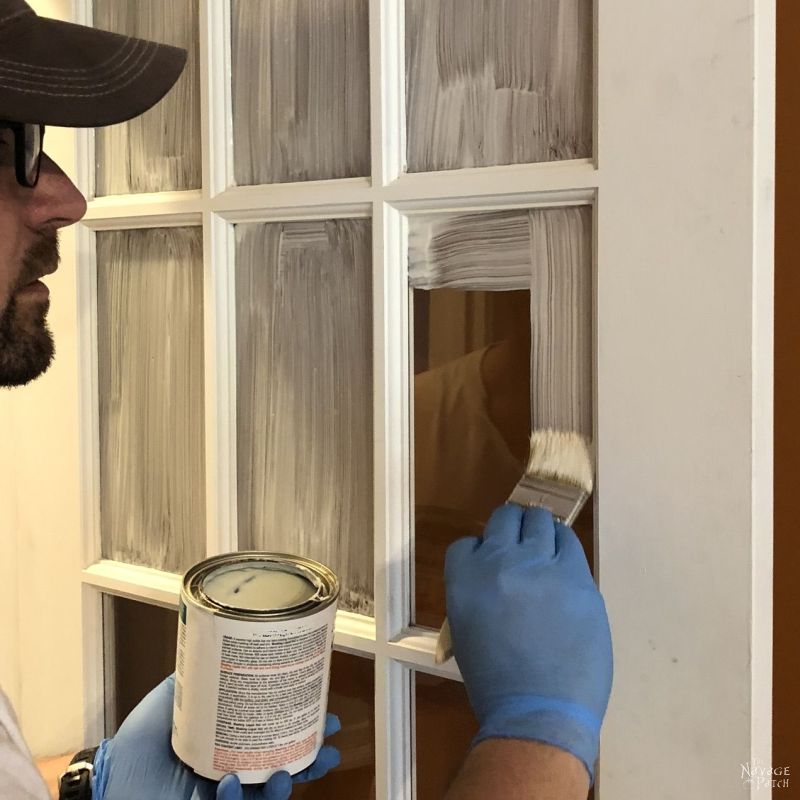 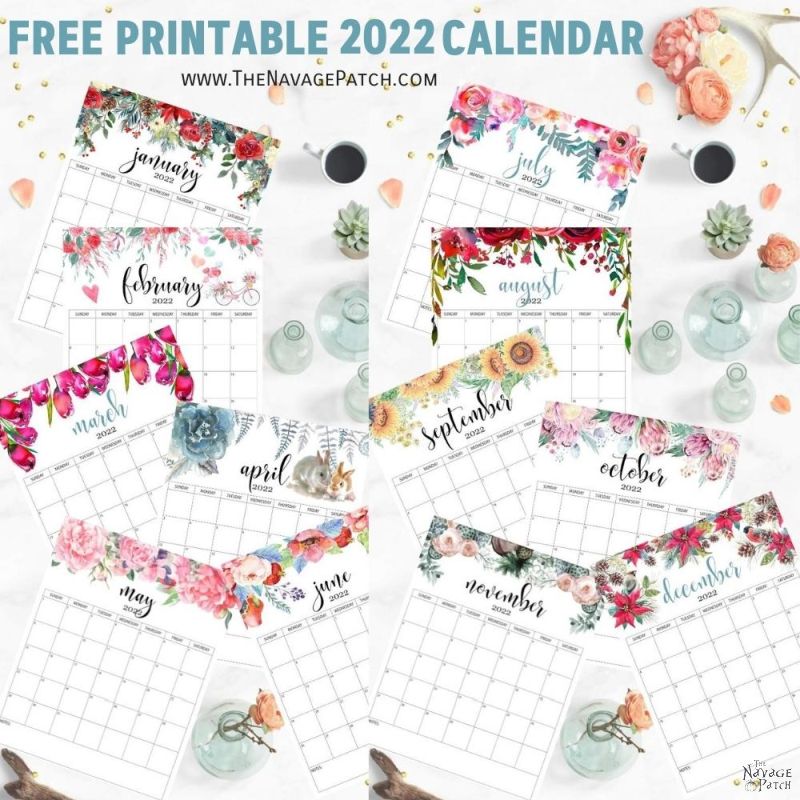