Jeezum crow, has it been two years already? It feels like only yesterday that I was lugging boulders out of the pond on a raw March day to start the Pond Project! 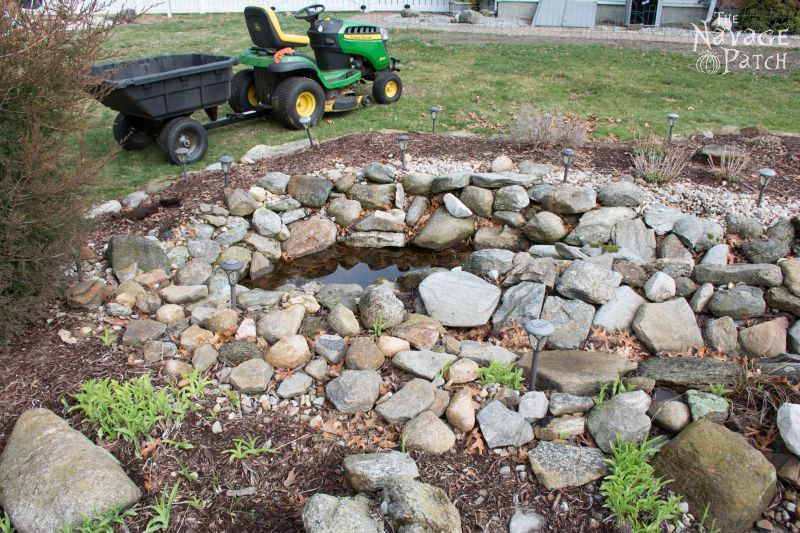 What followed was one of our most grueling undertakings. Here is how it looked in the beginning. 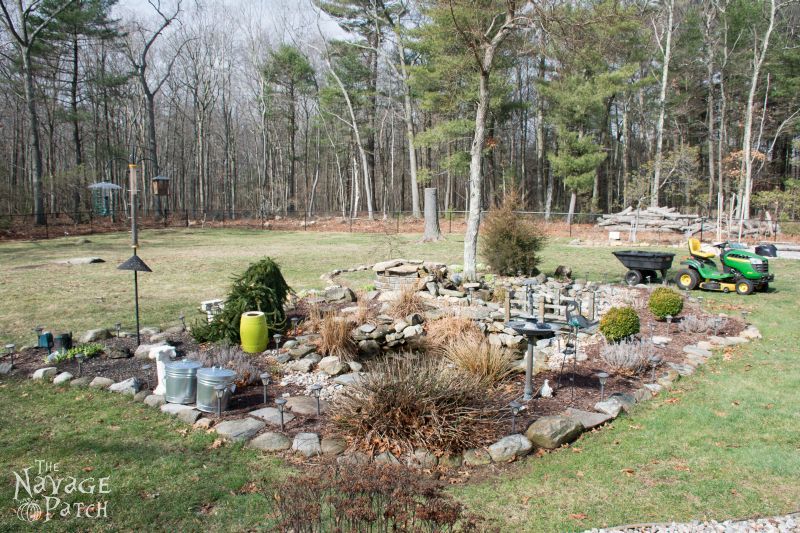 The project lasted three months. When I started, the grass was yellow, and the trees were bare. April brought snow and then frequent weekend rains which kept us sidelined for almost a full month. By May we were back in action, and the work progressed into June. From winter coats and boots to shorts and bare feet – this project saw it all. There were tears and swears and hands thrown in the air on an almost weekly basis. There was a lot of this: 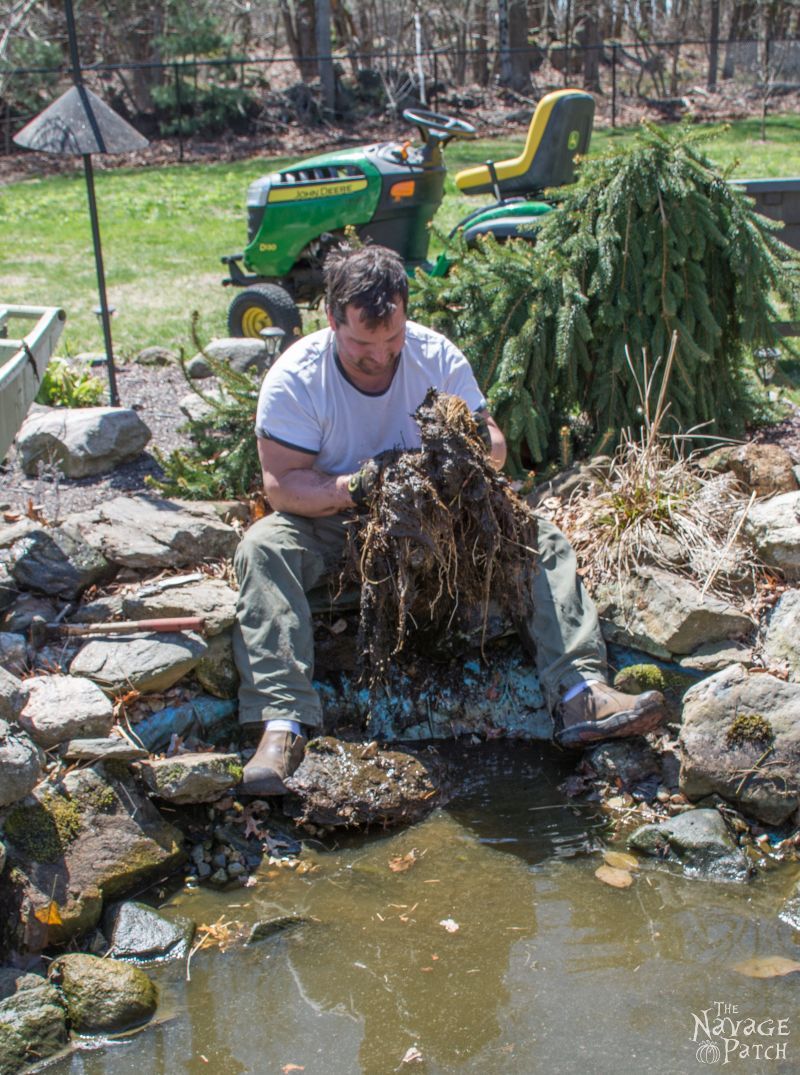 But there was also some of this: 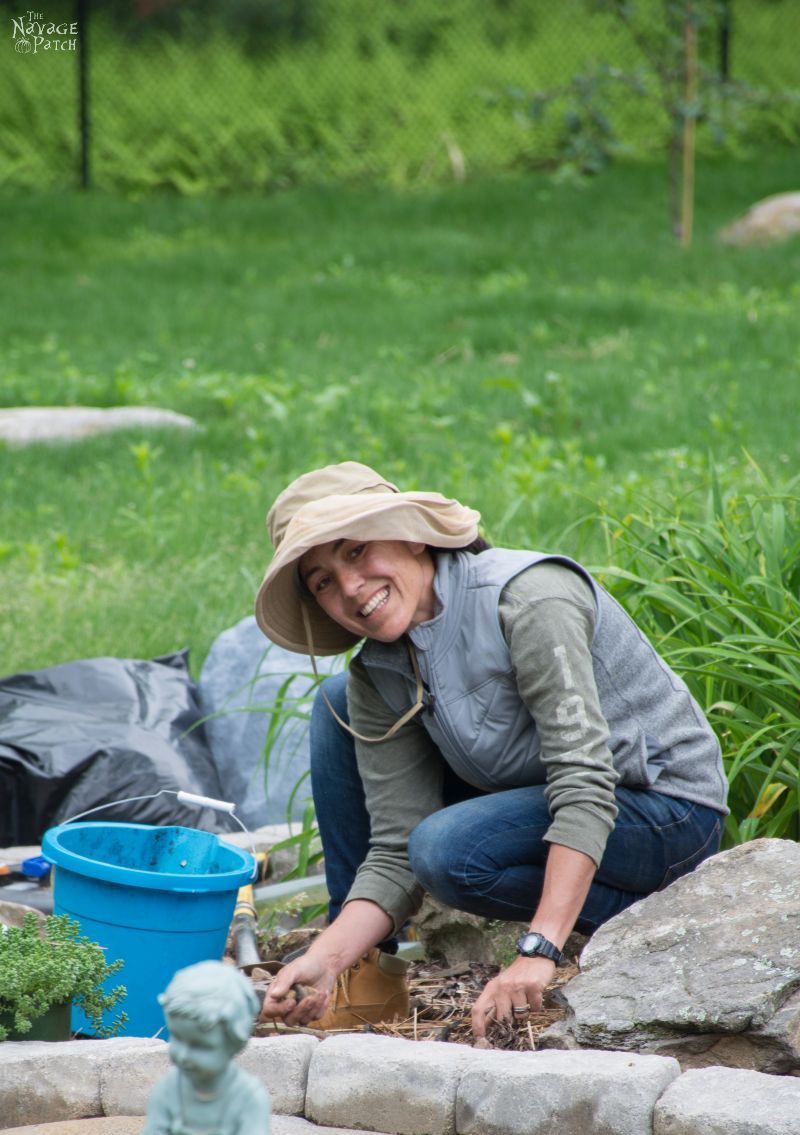 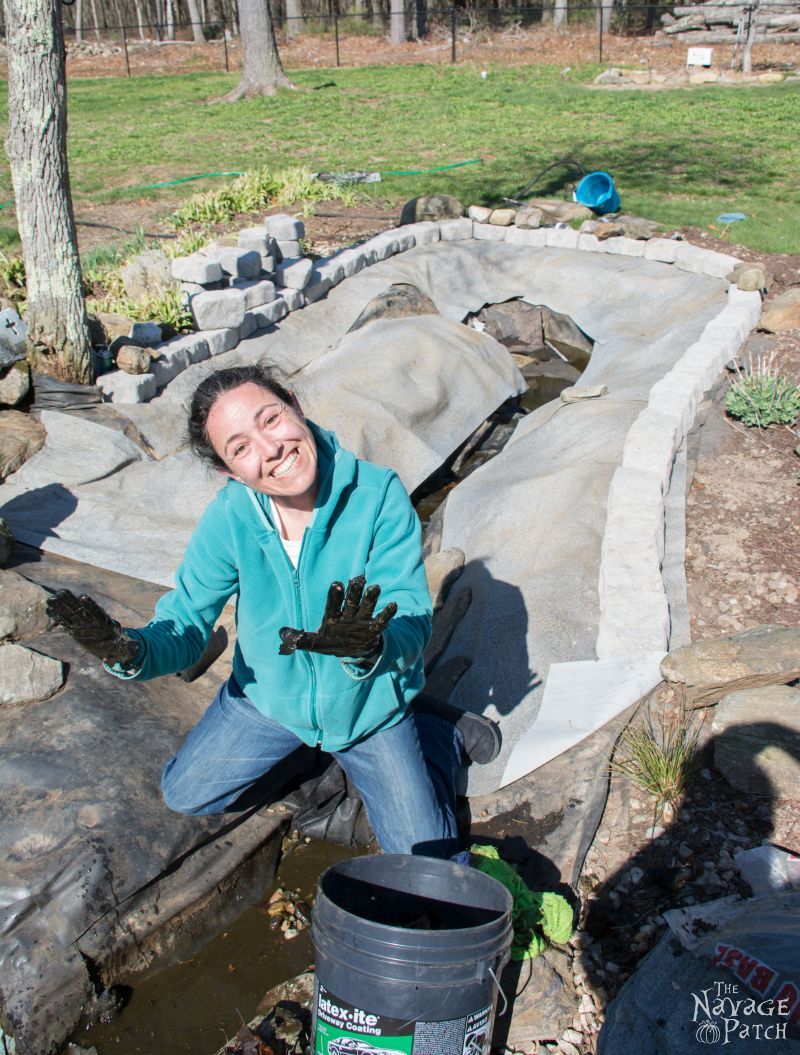 Tough projects bring out the best and worst in us all. There have been two that topped all others for us: the guest bathroom renovation and the pond project. Both projects brought out our claws and our bared teeth at times, but in the end, they brought us closer.

If you can tackle a major renovation with your spouse and come out the other side still married, you really can accomplish anything.

At this point, Handan and I could probably build a bridge to the moon.

Anyway, all that work paid off with this: 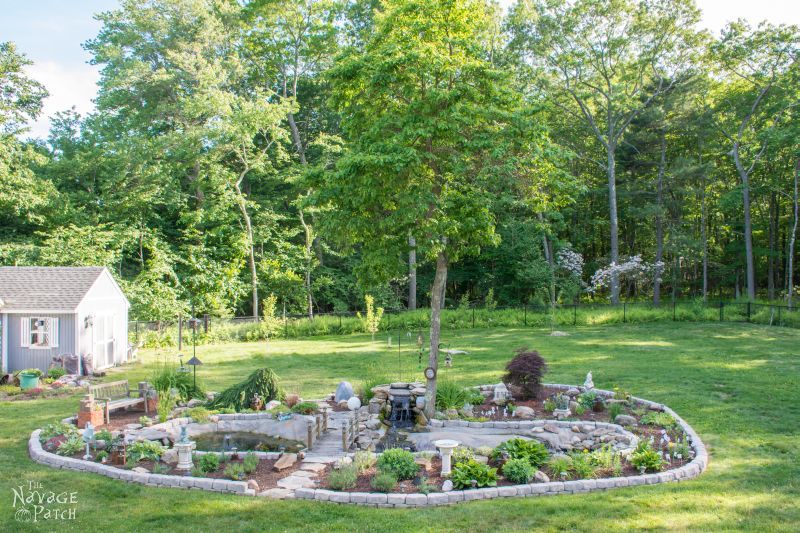 And it’s been growing ever since!

I know, I know. Two years ago I promised that last year I’d give an update post with pics. Look, I meant to, really I did. And I was totally gonna do it, I promise! But, you know….some stuff came up. Important stuff. Unavoidable stuff.

Okay, I forgot. [You forgot? I reminded you every week, you silly bugger! -Handan]

But fret not, madam! This year, we got an early jump on things, and the pond is looking fantastic! So let’s forget about who may have forgotten what or who may have had so much important stuff to do that he let it slip his mind! Let’s just have a gander at what’s going on in the pond, here and now! 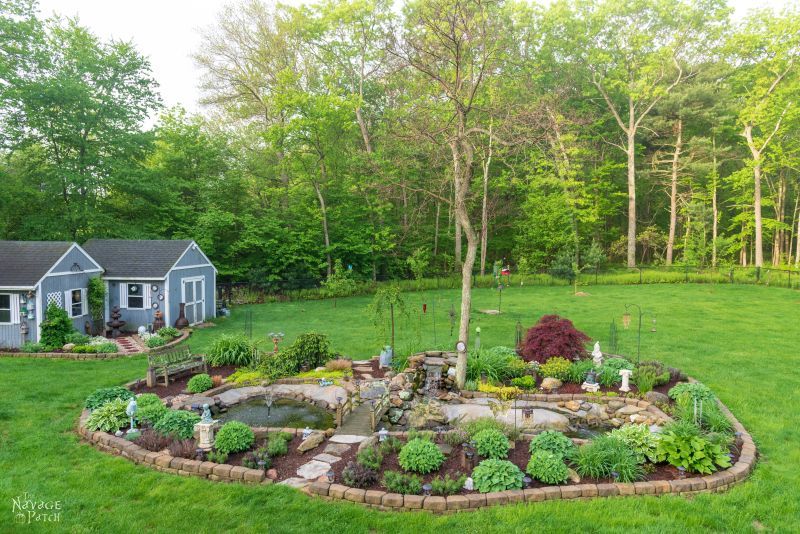 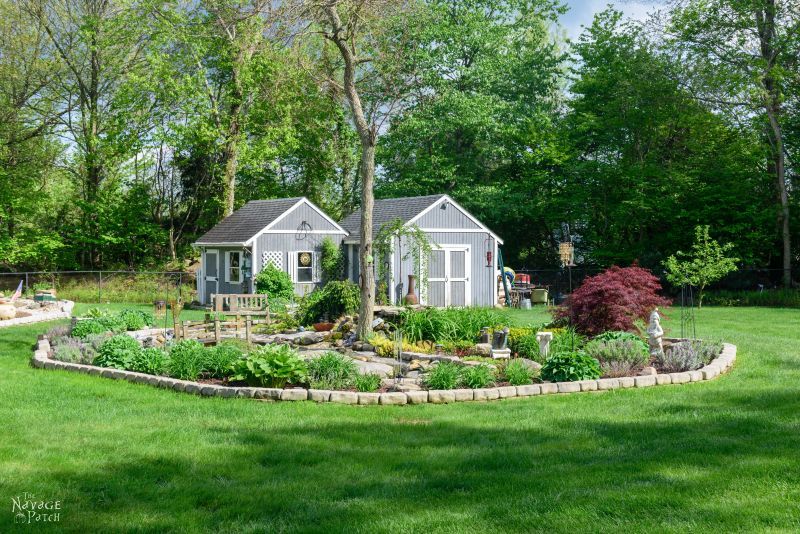 Let’s move in and have a closer look.

Like all hostas everywhere, ours have flourished and grown to gargantuan proportions. Last year, we had to split them, as they were already threatening their neighbors. Hostas are kinda like Handan. If they see an empty space, they fill it! Oh crap, she heard me. Run away! 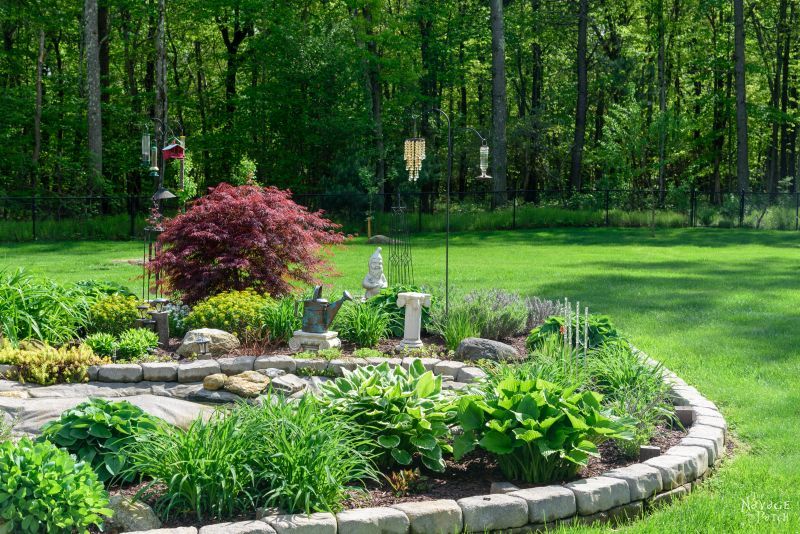 In between and throughout, Handan planted Stella D’Oro re-blooming daylilies. No blooms yet, but they’ll be coming!

Am I the only one that thinks of those little breakfast treats when hearing the name, “Stella D’Oro?” Remember those television ads from the 80s or 90s? Some woman in a robe is sitting at the kitchen table at 3 in the morning gobbling down Stella D’Oro Breakfast Treats. Husband walks in and asks what’s up. She says she can’t sleep. He sits down with her, and then they both start gobbling the breakfast treats. I can’t remember if the point was that the breakfast treats were so good they couldn’t wait for morning or that they had insomnia and the treats help them get back to sleep. Doesn’t matter, I guess. If I still remember the ad all these decades later, they must have been effective.

Except I never once bought nor ate a Stella D’Oro Breakfast Treat. Are they any good?

But as vigorous as the hostas are, they’re nothing but wilted pansies compared to the sedum we planted. Last year, one grew so big that it smothered the lavender around it. By early fall, it had collapsed outward in a ring from its center due to its tremendous height and prodigious weight. This year, we’ll remove one to give a little room for the rest of the species. 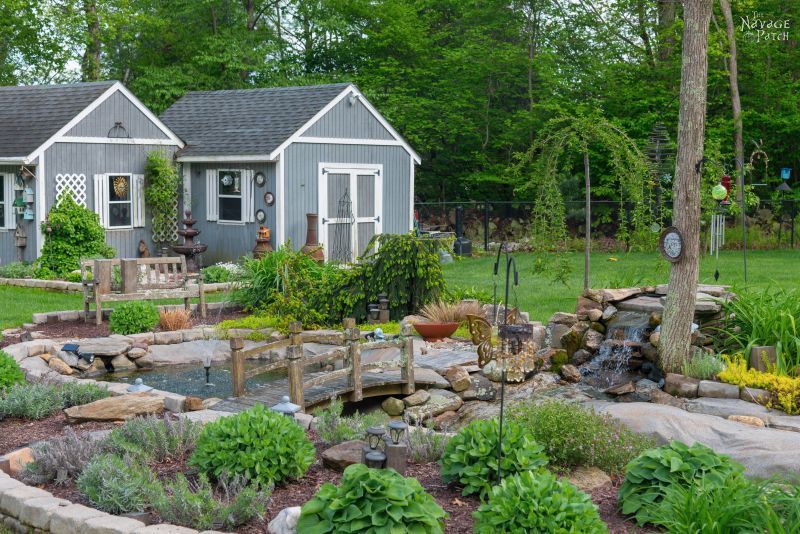 I don’t know what it is about the pond garden, but the soil must be full of illicit performance-enhancing fertilizers, because by mid-June, the pond area looks like Muscle Beach Gym on a sunny Saturday morning. But who’s supplying the nitrogen? And the phosphorus? What about the potassium? My guess is the squirrels. I think the chipmunks are in on the action, too. I’ve heard turf wars at night, as the two sides battle for rodent dominance of the garden fertilizer trade. They better watch out though, because I hear the frog and toad gang is on the rise.

Handan loves her lavender. Really, she’s batty about the stuff. She planted a whole bunch the first year and a whole lot more last year. The harvest filled an enormous bag, and she was making sachets and little smelly things for weeks!

So far this year, it looks like most of it is coming back pretty good, but I think she’s planning on culling them a little bit to make room for some new blood. 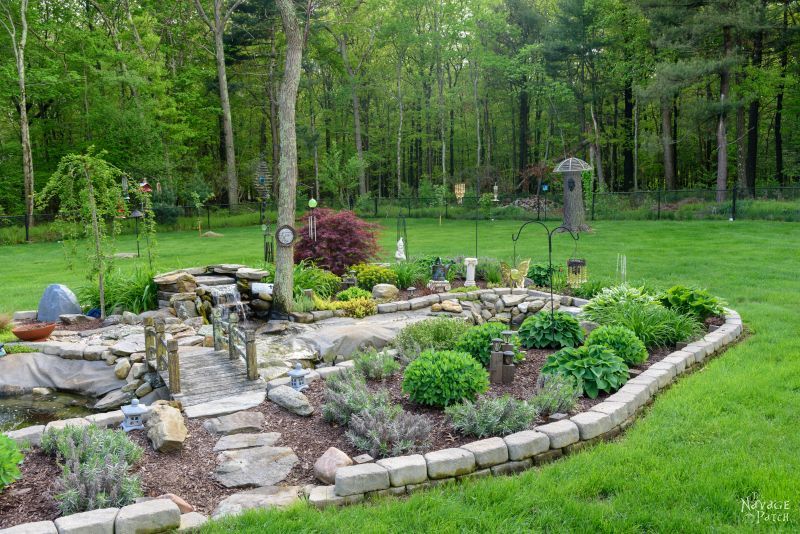 The succulent ground cover is doing great. It has finally started to spread down the sides of the pond. The goal is still to get most of the rock liner that is showing above the waterline to be entirely covered with various creeping succulents. We’re going to plant some more this year. Hopefully they’ll reach the waterline before I’m eligible for AARP. 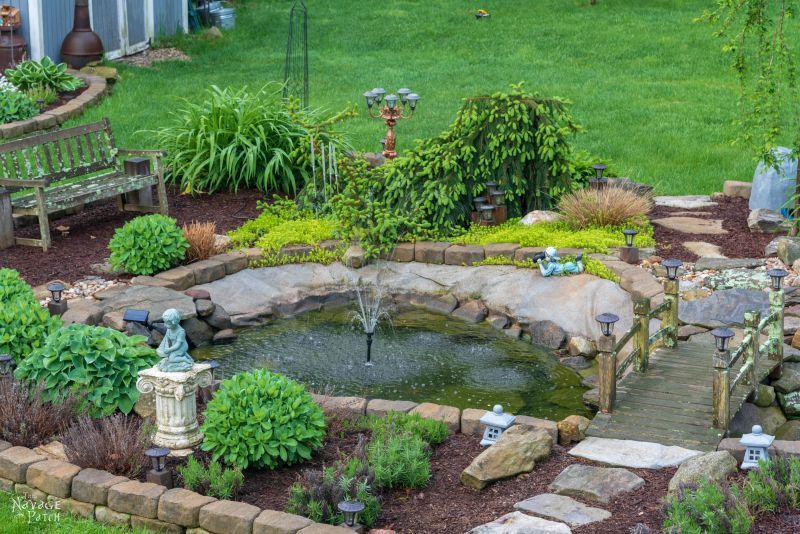 Back in our first or second year, my parents gave us a little Japanese maple that we planted in the pond area. It’s a slow grower, but this year, it’s starting to come into its own. In another year or two, I’m hoping to will be a good sun shelter for our dogs. I should probably prune it one of these years. It’s starting to look as unkempt as I do. 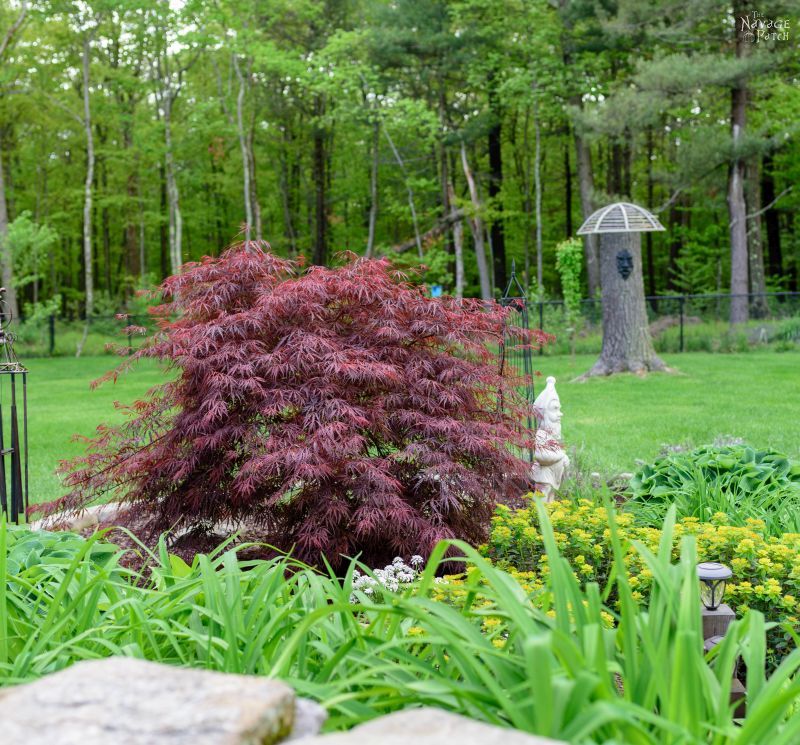 Back near the maple, the things that Handan planted two years ago have really taken off. I love the Candy Tuft. 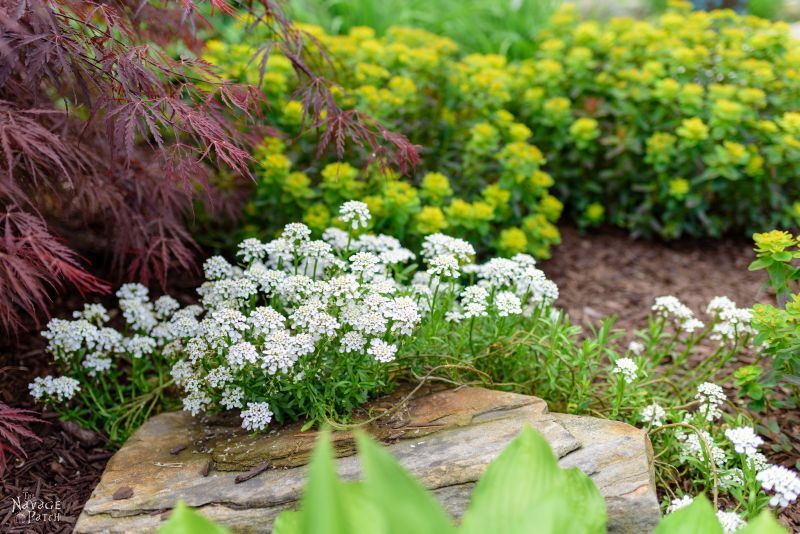 But even better is the yellow Cushion Spurge behind it. It is the softest plant I’ve ever touched! Not only does it look and feel amazing, but as it is native to Turkey, it’s like a little slice of home for Handan. 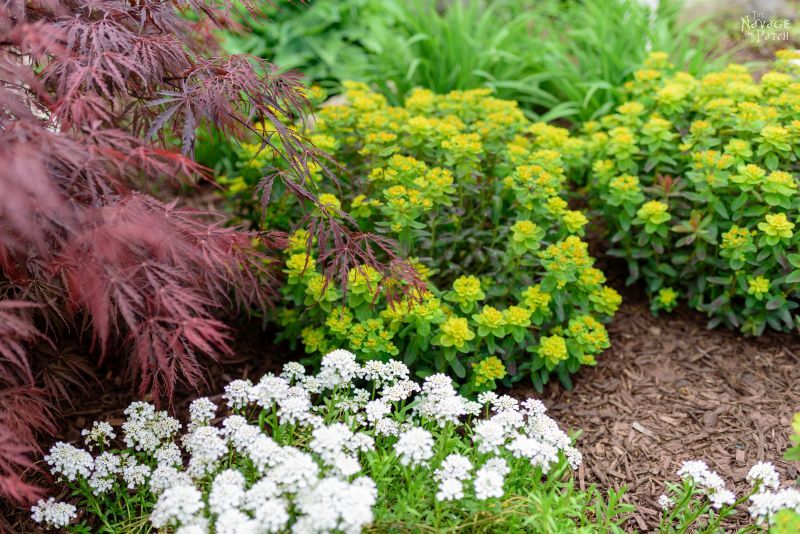 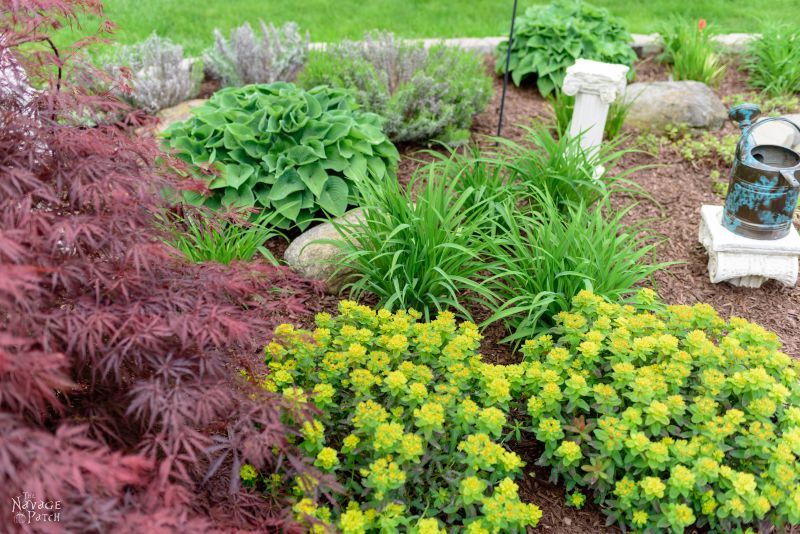 That little guy in red next to that honkin’ big hosta is our tritoma kniphofia, or “Flamenco Mix,” but I prefer to say, “tritoma kniphofia.” I use it to chat up the ladies in the garden center.

“You wanna see my tritoma kniphofia?”

This is generally followed by a mortified gasp, a handful of mulch thrown in my face, and a resounding, “Well! I’ve never!”

Anyway, my tritoma kniphofia may not look like much now, but soon he’ll have a dazzling display of red and yellow rods. Maybe then the ladies will want to look at it… 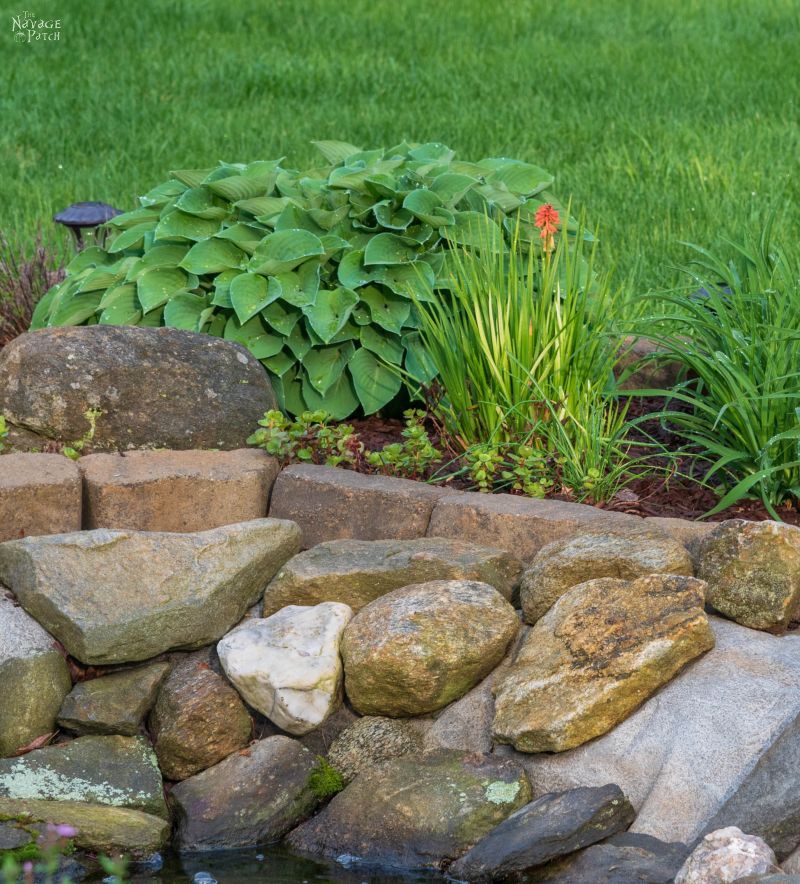 Since the sassafras tree in the middle of the pond area died mysteriously last year, we need to get some more trees into the mix. We started with a small weeping cherry. 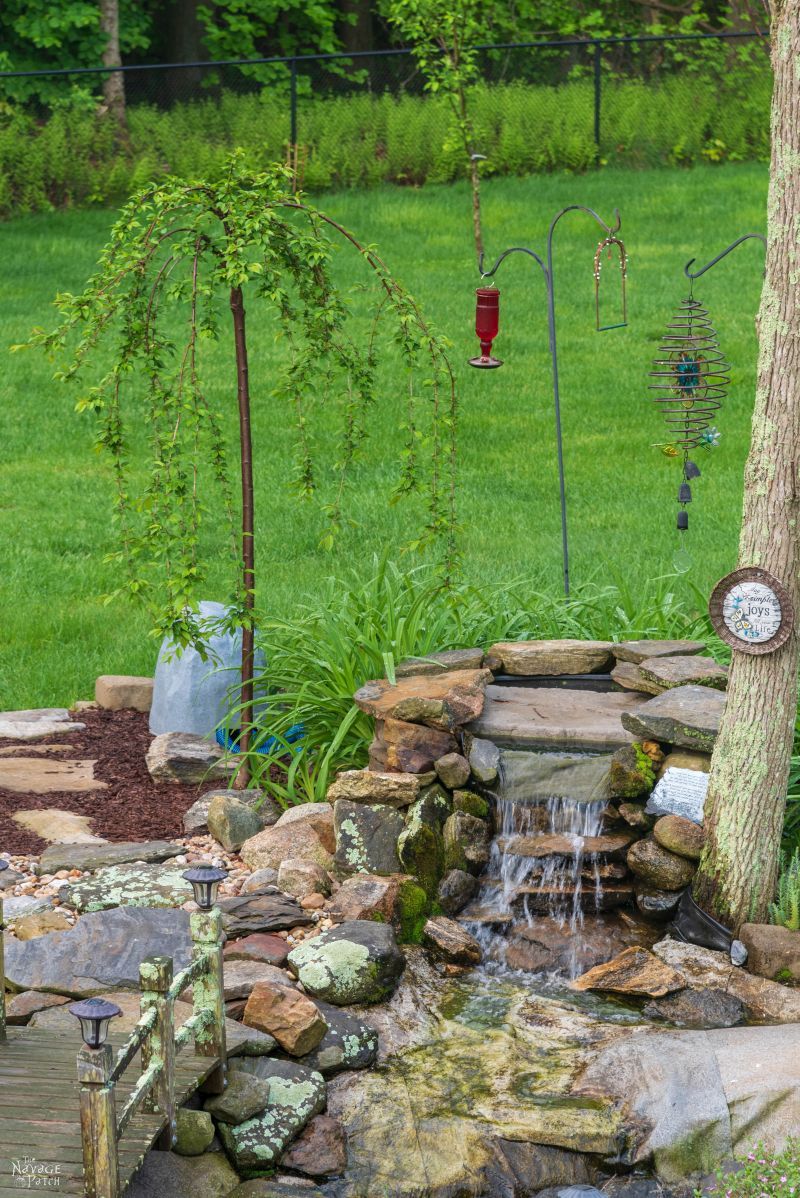 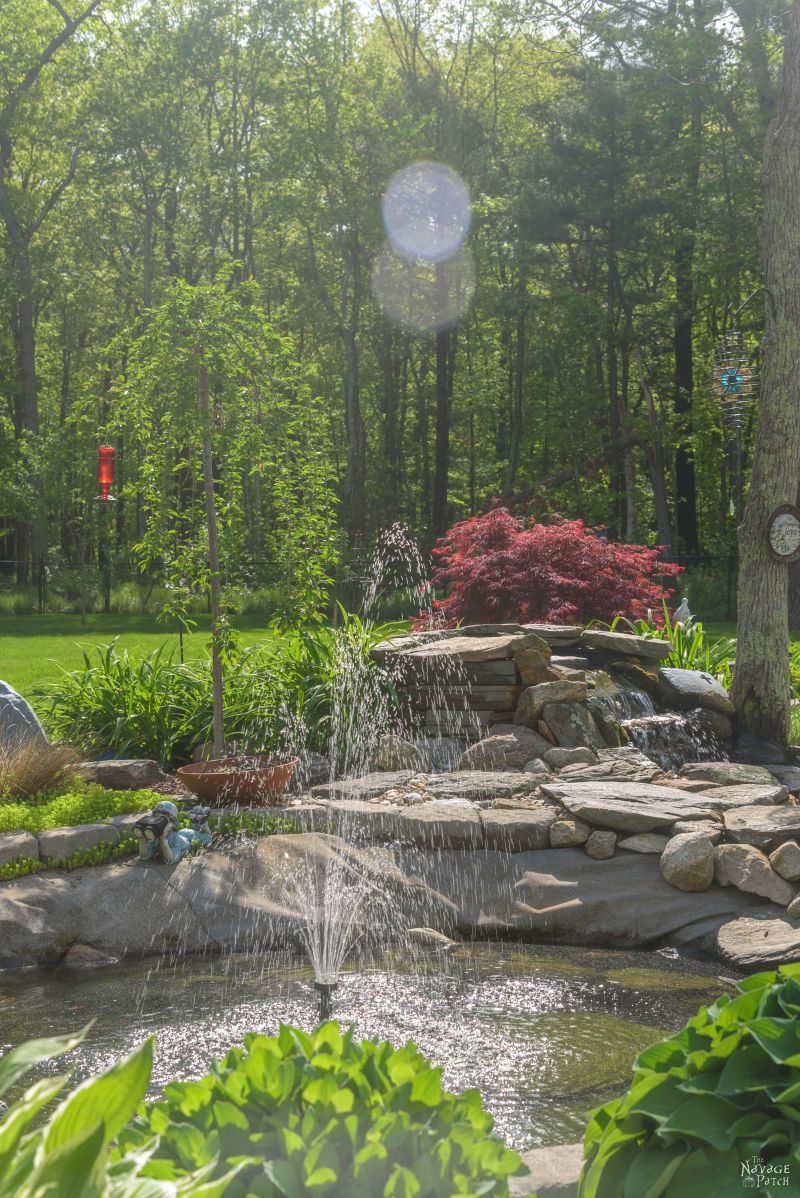 We still need to take the sassafras down. I’m not sure how we’re going to do that just yet. We could hire someone, or I could start dismantling it, limb-by-limb. Poor tree, though. We really liked it there. Hopefully our new trees will fare better. We’re thinking about putting a dogwood in there somewhere, too.

You can see we have the hummingbird feeders and Handan’s hummingbird perches up. It’s been a busy year for the little buzzers. I’ve already rescued four of them from our house! The last one was a dramatic affair. He spent every drop of energy trying to break through the ceiling, and when his tank was empty, he fell 18 feet to the floor. I made a video of his revival. Look for that early next week.

There’s just one last thing I’d like to ask before you go. We have this awesome ground cover growing down one side of the pond. Unlike the other ones, this wild beauty moves fast! But we can’t remember what it is! Can anyone identify this plant? 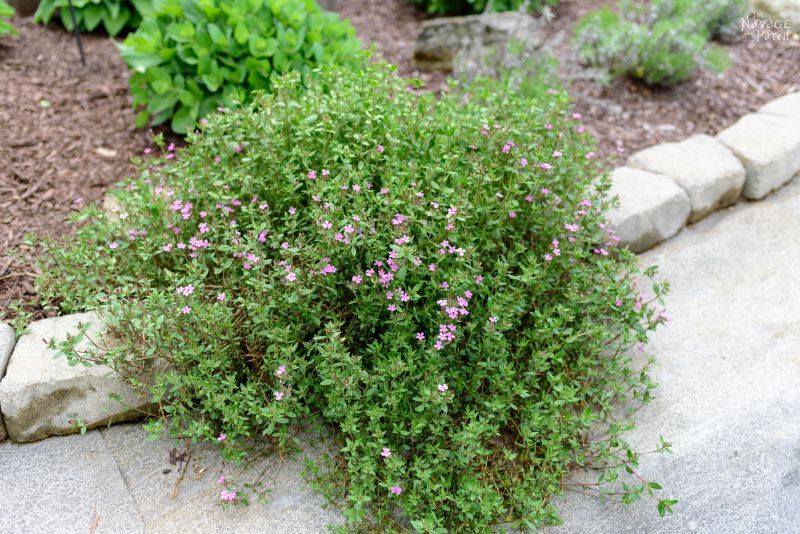 Please let us know in the comments so we can buy some more!

Happy planting, all! Feel free to share your current garden adventures in the comments section. I always look forward to your comments and feedback! 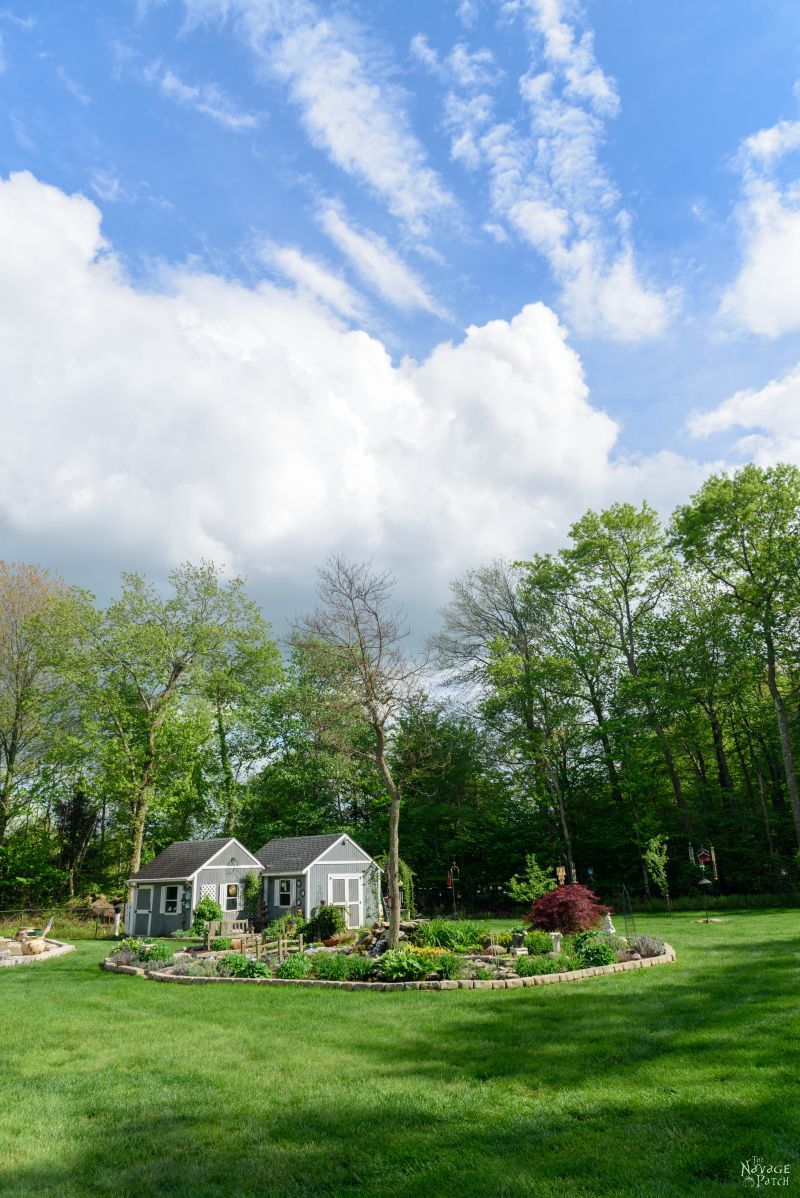 (Pssssst! Hey you! Yes, you, madam. You wanna see my tritoma kniphofia?)

197 shares
« How to Build a Raised Garden Bed
Hummingbird Revival »