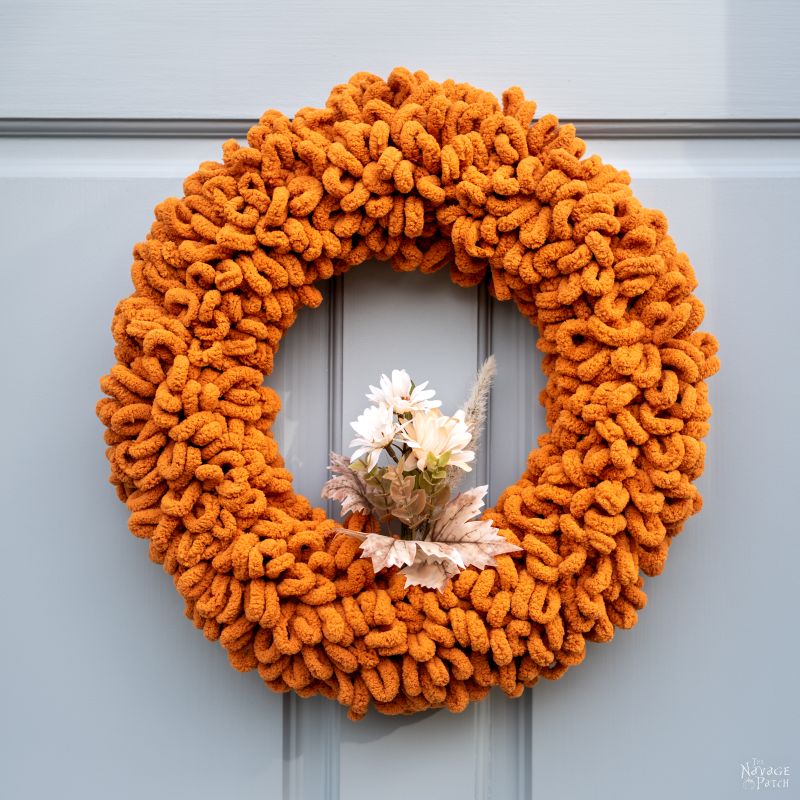 This DIY fall wreath can be made in about 10 minutes, and it takes no skill at all! The decorating possibilities are endless!

I know, I know, enough is enough, right?

Another year, another loop yarn wreath from the loop-heads over at The Navage Patch.

But lest you think I’m just resting on my laurels and trying milk every last drop from this unexpected viral sensation:

I’m not! It’s just that my babes has loop yarn on the brain. Ever since that post, she’s been champing at the bit to (have me) wrap loop yarn around anything circular!

Some folks even made their own versions.

Of course, among all the ooohs and aaaahs and oh, Greg, you’re such a handsome genius was the usual smattering of sour grapes, as if this simple winter loop yarn wreath was the cause of all the bile and misery in their lives.

Yeesh, what an odd place, this internet.

Like I said, my babes had loop yarn dreams after that. She wanted to make a Halloween spider wreath (which we did):

She wanted to make the Easter Bunny (which we didn’t).

And she definitely wanted to make a loop yarn wreath for fall.

And then there’s “man easy.”

Now imagine your significant other trying it for the first time.

There would likely be grunting. Lots of grunting.

And swearing. A man ain’t tryin’ if he ain’t swearin’.

And muttering! Can’t forget the muttering! When we’re not swearing at a confounding task, we’re certainly muttering about the futility of it all and wondering how the hell we ended up in this predicament in the first place!

Always one to play with words, I’ve offered her an alternate term – a more streamlined and efficient label: “mantrum.”

Just last night I threw a classic mantrum. Handan wanted us to move our old power-reclining loveseat from the kitchen area to the basement. Since it weighs about as much as a baby elephant and I had no desire to move it any direction that wasn’t towards the curb, I started muttering about the damn thing. It went something like this.

You see, the whole point of a mantrum is to avoid saying what you really feel, namely that I wanted to toss it away or sell it for a song, because I was too damn lazy to carry it to the basement. But I didn’t say that.

Unfortunately, the Land of Feelings is where women reign supreme.

This is why mantrums are inevitably doomed to failure.

All of this is a roundabout way of saying that this easy DIY fall wreath is so easy that even your unshaven sofa sprout can make it in about 10 minutes.

That is Man Easy!

So let’s hop to it, because fall is just around the bend. That used to mean cool weather and crunchy leaves swirling in the breeze when we lived up North. But now that we’re in Georgia, I’m really not sure what to expect. Maybe it’ll just cool down from “humid blast furnace” to “comfortably sweltering.”

Okay don’t blink or sneeze, madam, because you might miss the tutorial! If you are one of our regular readers, you may be familiar with how to make this DIY fall wreath, so I invite you to read on for a refresher course, or you can go outside and dance a minuet if that suits your fancy. For our new readers, behold the simplicity of loop yarn!

In fact, go find a man and tell him to make this wreath for you! Seriously! It’s time for you to put on some slippers, pour yourself a glass of wine and enjoy the spectacle of Man Crafting. Just don’t leave the room, or something might explode.

Tell Bob to find one end of the loop yarn. Inform him (because he will be entirely ignorant of this fact) that yarn pulls out nice and easy when you start with the end buried in the middle of the skein. Also tell him what a skein is. He’ll have no earthly idea. Trust me.

Inform Henry that this DIY fall wreath is dead in the water if he doesn’t stop picking his nose. Instruct him to pick up a sewing pin instead.

Now that he’s holding a pin, your Clarence is Armed and Dangerous (to himself), so keep a close eye on him! Tell him to lay one end of the loop yarn onto the wreath form as shown in the picture below and then secure it in place with the pin.

Tell Charles to grab the skein (that word again!) and start wrapping. Pull it up from behind…

…and toss it in the hole. Make a basketball reference if you have to. The male brain is wired to understand new concepts better when they are analogized with sports.

Every 3 or 4 passes, tell your Larry to slide those loops together so they’re nice and snug.

After a few more loops, tell George that he’s doing a fantastic job and let him show you what he’s accomplished thus far.

Repeat the above until your Larry reaches the end of the first skein.

Now, at this point, Roger may be looking a little lost. I mean, there he was grabbing and yanking and tossing like a born champion, but then his yarn ran out! Tell him not to worry and show him the second skein. Tell him to fish the end from the new skein.

Now ask that he grab a pin (Armed and Dangerous again!) and pin the end of the first skein and the beginning of the second skein together on the wreath form.

Oh right. That was CSNY and NRBQ.

If he reaches the end of the second skein, and you still see some exposed wreath form, instruct Gary to start in on the third skein.

You’ve done a tremendous job so far, madam. Have another glass of wine to celebrate your impeccable managerial skills! If you have a cheese platter nearby, grab a hunk for yourself and toss a grape at your husband.

Once he covers up the wreath form, tell Ned it’s time to tie her off!

Give him the scissors and a stern warning not to use them for any sort of shenanigans, tomfoolery, buffooning or skylarking. Instruct him to snip the loop yarn.

Then tell him to stick that snipped end into the wreath form.

Look how proud he is! You may now give him a beer and have him take a few sips before embarking on part 2 – the decorating!

Ask Mickey to pick and cut a few choice sprigs, leaves and flowers from the faux flower assortment. This part is all up to him and whatever strikes his artistic fancy.

Fair warning though, madam! Less is more when it comes to wreath decoration, and men are not renowned for restraint!

So if your bearded weirdo starts getting a little too frisky with the foxglove, you can gently (but firmly) remove some flowers from his hand until he’s holding just the right amount. Then you’ll probably want to help him arrange them in an eye-catching manner.

When he’s assembled the perfect sprig of autumnal beauty, tell your Alistair to poke the ends of the sprig into the wreath form.

Leap to your feet and give that man a standing ovation! He’s just gone where few men have gone before!

Here’s a look at our DIY fall wreath.

It looks pretty awesome on our new front door.

Have you made any loop yarn wreaths?

Let us know in the comments and email me some pics, if you’d like. 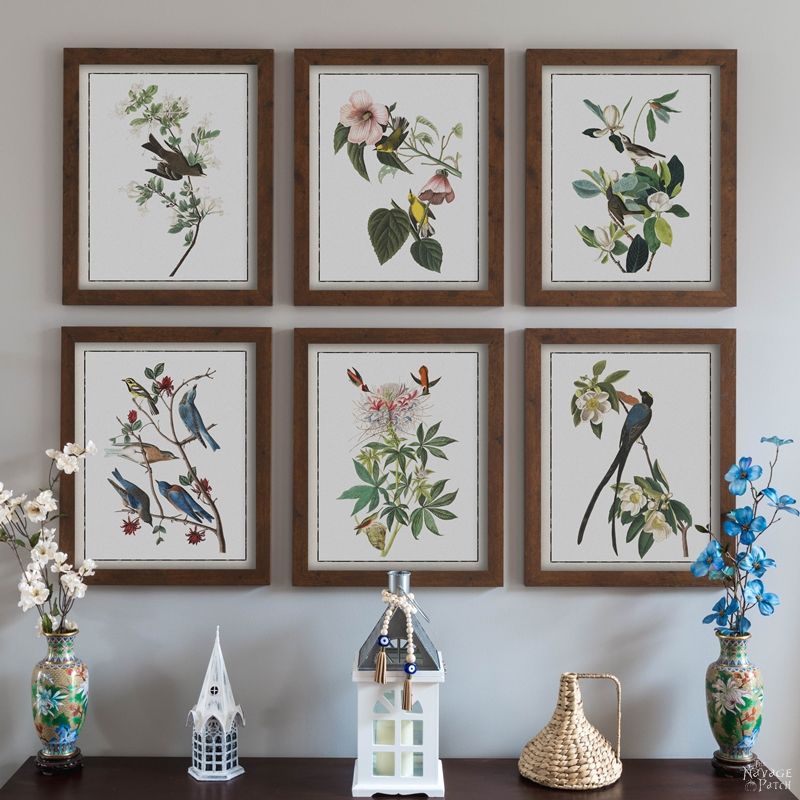 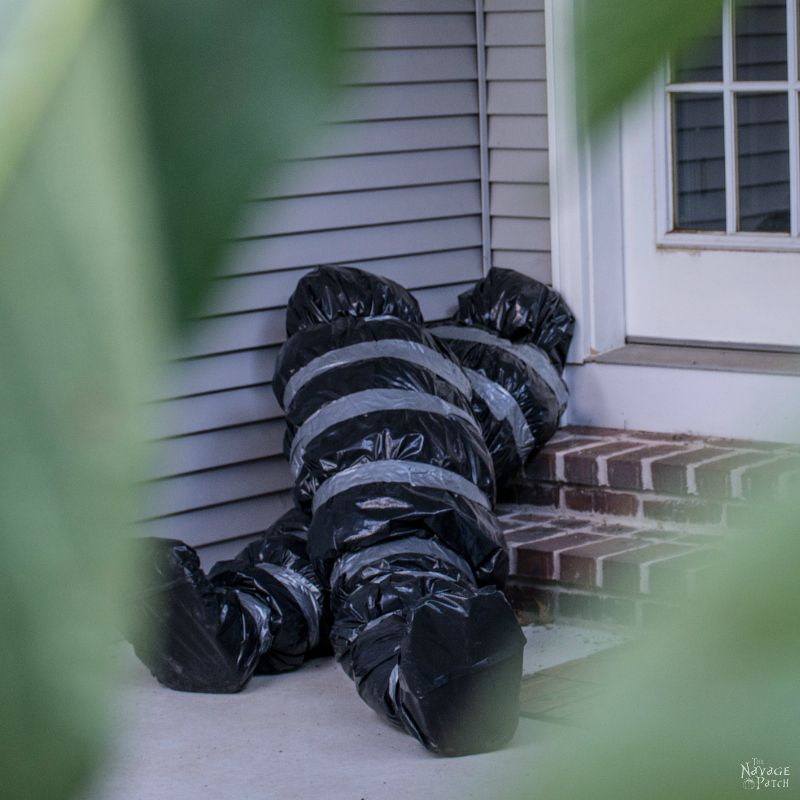 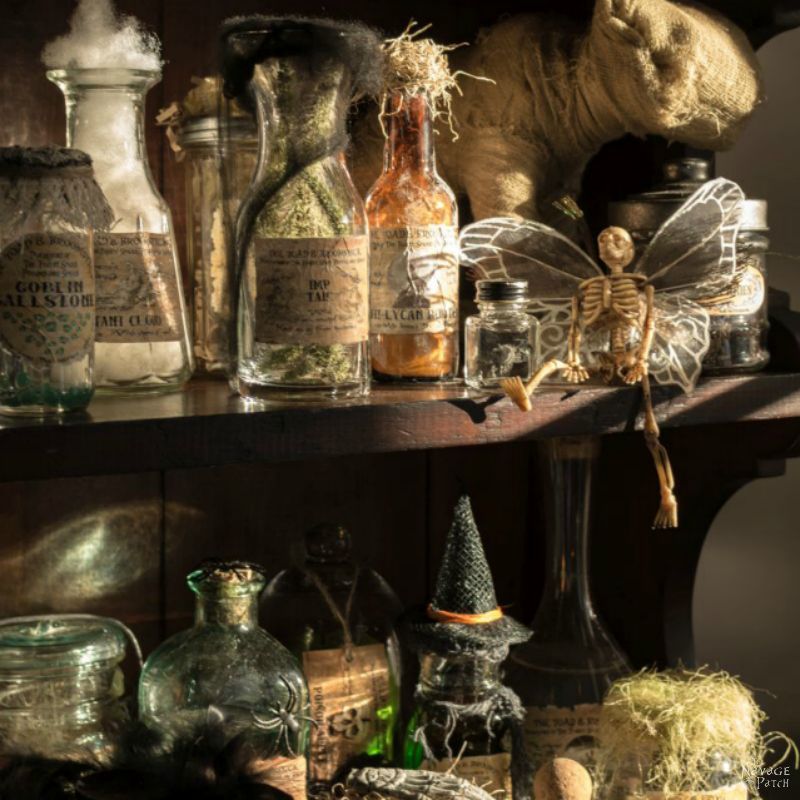 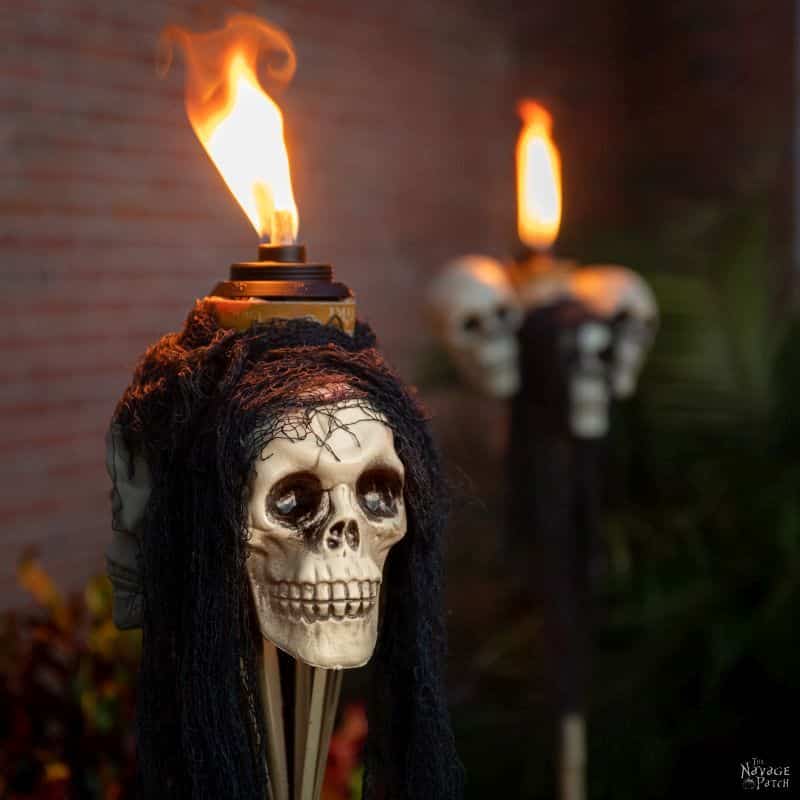 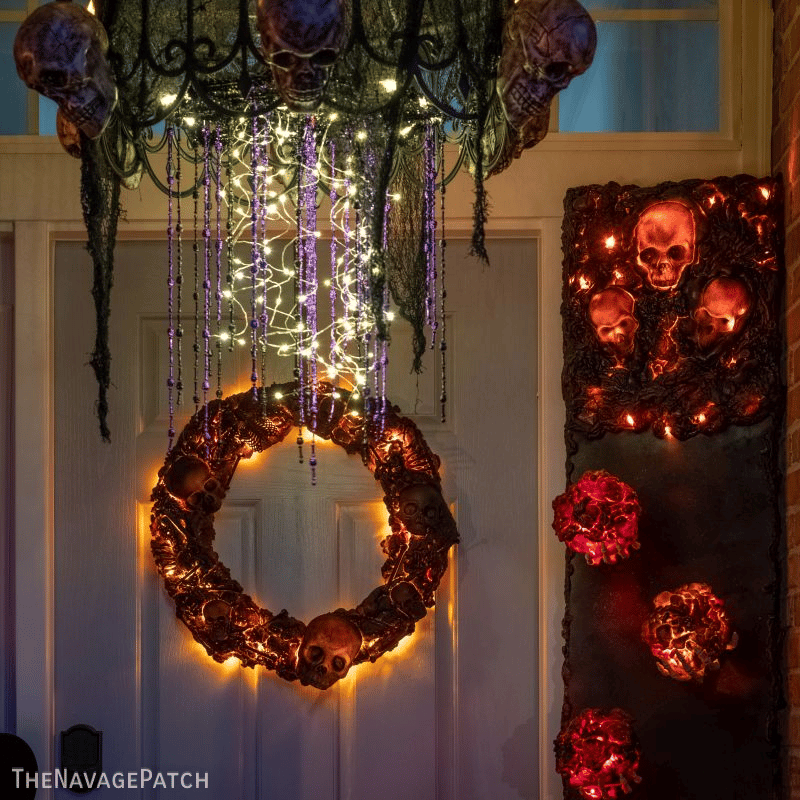 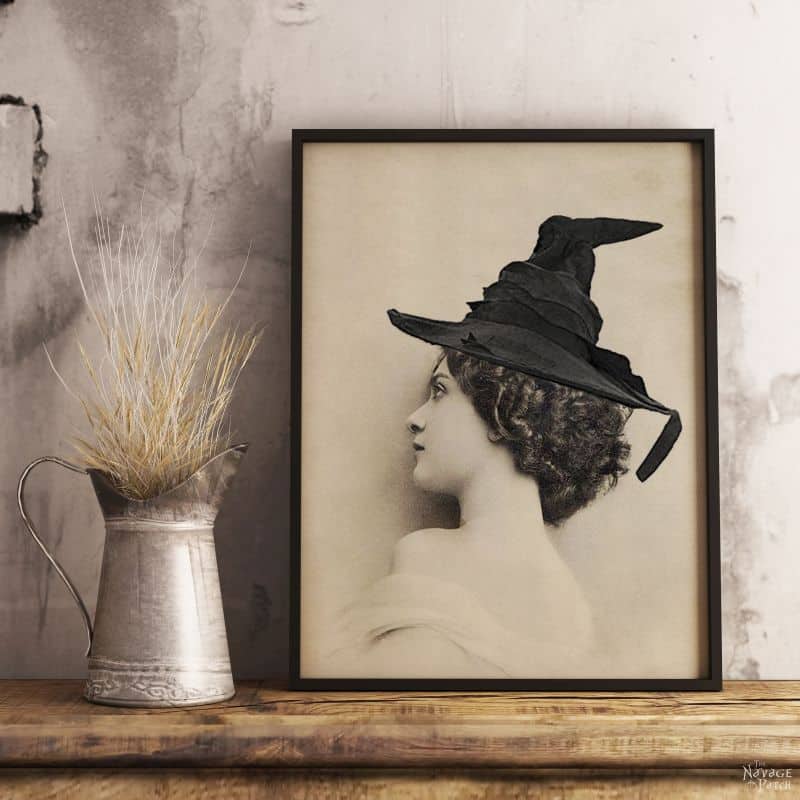 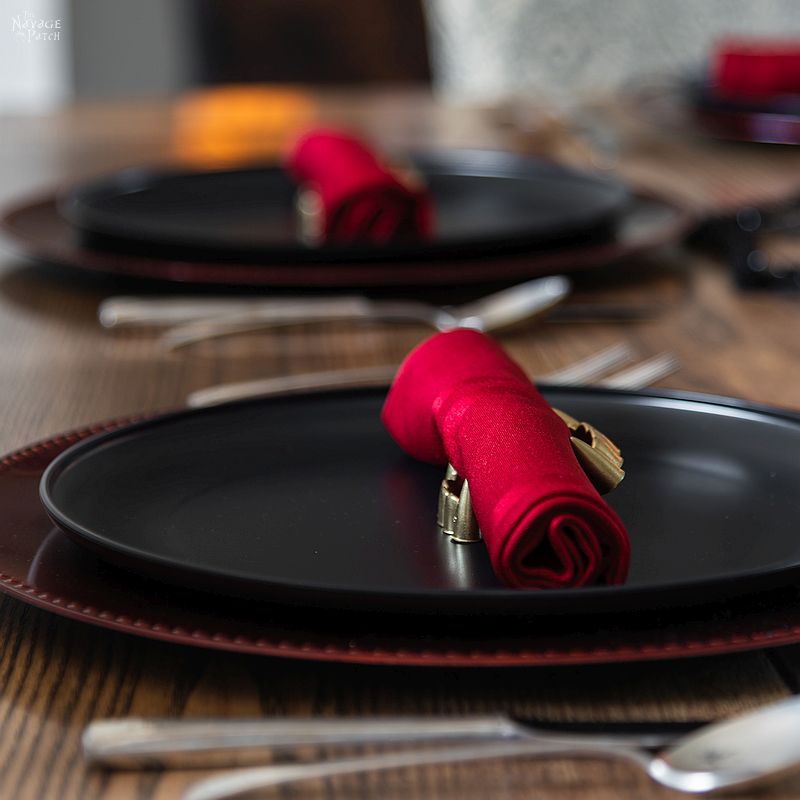