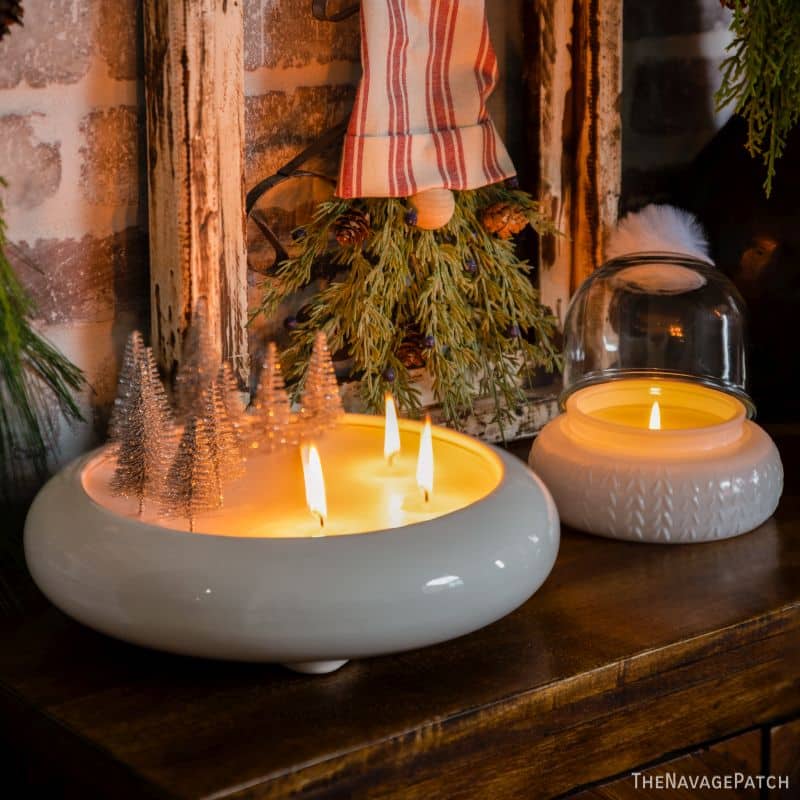 These easy DIY Christmas Candles are the perfect gift for your spouse, coworkers or even yourself. They’re easy, inexpensive and look fantastic!

And who could blame them? They’ve been riding the gravy train from your wallet to the bank for far too long. Have you seen the prices they charge for blobs of wax with a piece of string sticking out?

People bitch about corporate America turning a profit, yet they have no issues vomiting 50 hard earned clams for a stinking candle and then sinking another 8 dollars into a half skinny double caff latte with the apple-caramel drizzle on top to celebrate their purchase.

Well, the wick stops here, madam. Our candle-splurging days ended back in 2013 when we took Baris to visit the Yankee Candle Sensory Overload and Wallet-Emptying World Headquarters in Massachusetts.

Bowls of what are essentially scented chapstick selling for 20, 30, 50 dollars and more.

And I’m convinced that visit turned my son off of bacon forever, a fact that still sticks in my craw. How, you ask?

Those self-anointed scentmasters decided it would be a smashing idea to produce a bacon-scented candle. Baris – then an impressionable boy of 10 – opened the lid and inhaled deeply.

This was followed by a fit of gagging and dry-heaving so severe I though I might be dealing with a physical comedy genius.

But it was real. The smell so repulsed him as to make him nearly stain the wooden floors a deeper shade of yellow.

And ever since then, my beloved boy has harbored a deep and abiding hatred of anything bacon.

I blame you, Yankee Candle, for depriving my son of one of life’s greatest pleasures!

But I’m losing the thread here. The point is, the Candle-Industrial Complex has held a stranglehold on your minds and wallets for far too long, and they’ll do anything and stoop to any level to hold on to their power and the dollars that come with it.

“You can’t make candles in a bowl. It’ll EXPLODE!” they’ll scream at you as they clutch at their pearls.

“You can’t put plastic anywhere in a candle, it will melt, and your house will burn down and then you’ll EXPLODE!” they’ll wail and gnash their teeth and then implore you to think about the children, WON’T SOMEONE PLEASE THINK OF THE CHILDREN!

These are the rantings of someone at risk of losing power or perhaps the ravings of one of their internet-educated disciples.

You may ignore them and use common sense as your guide.

I made 4 candles in 4 containers, and I’ll talk about each container as I get to them.

Watch our short and fun video below for an overview of our easy DIY Christmas candles before you read the detailed step-by-step tutorial.

This candle sits in a large and shallow ceramic bowl we found at Goodwill for $2. I put 3 wicks towards one end of the bowl. Though we proved this candle to be safe via a long-burn test, if I were to make it again, I’d shift the left and the right wicks a little more towards me in the photo below. Not much, maybe a half inch shift at most.

I secured the wicks with a wooden spoon, a bamboo skewer and some small hair clips.

I then poured in the contents of 8 melted Dollar Tree jar candles. This was a big bowl! The 8 candles didn’t fill it all the way, and that’s how I wanted it. I left the candle to cool for a few hours, and then I returned to add some trees.

When the wax had solidified but still wasn’t hard, I arranged the trees around the rim opposite the wicks. These Dollar Tree bottle brush trees have small wood bases that I pressed into the soft wax.

The key here to avoid a tree-in-the-flame situation is to position the tall tree at the farthest point and the small trees far enough from the wicks so that even if a tree did fall, it wouldn’t fall near the fire. Two inches or more is fine.

All the trees below survived the long-burn test, but again, if I had to do it over, I’d just place the wicks a little closer to me.

After placing the trees, I poured one more jar of wax into the candle to seal in the trees.

And just so we’re clear: yes, I know this candle isn’t going to burn evenly. That’s the whole point! I don’t want those trees sinking in melted wax!

I let the candle cool and harden overnight, and then I trimmed the wicks. The other key to a successful and safe candle is not to keep the wick too long.

This shimmering tree candle is a real beauty, and as you’ll see, totally safe if made correctly.

Because so many experts on social media insisted that we were in imminent danger of exploding, we made this long-burn video to show that the candle (and the trees) are safe.

Look, it was an accident, okay? My babes had bought 3 ceramic reindeer figurines from Walmart, and I kinda sorta fumbled one.

In my defense, he was looking at me funny!

Well, “broken” has never stopped me before, so I scooped up his brittle remains…

…and smashed him a little more.

With two front legs, his head, and a piece of neck I glued onto it, I had the makings of an awesome Christmas candle.

I brought him upstairs along with a dollar treed ceramic bowl and two wicks. But first, I gave him a red nose, two beady little eyes and the hint of a smile.

I then hot glued the head to the side of the bowl.

Then I painted the bottoms of his shoes red and glued each leg into the bowl opposite the head.

Next, I put two wicks in the center of the bow. I aimed for the center, but it seems I missed my mark a little to the north.

I then secured the wicks in the usual way, and Rudolph was ready for his hot wax treatment!

When the wax was hard, I trimmed the wicks, and Rudolph was ready for action. Actually, scratch that. He wasn’t ready for anything but a whole lotta lounging and loafing!

Rudolph seems to like his spa day a lot more than flying around the world at breakneck speed, freezing his hooves off delivering presents to the Naughty and the Nice.

While perusing the shelves of Walmart the other day, I happened upon a set of Chrismtassy measuring cups with an elf head acting as the handle for the one cup measure. It was only a few bucks for the set, and elf was perfect for a small candle.

There was just one little problem. By the time I got around to making this particular candle, I discovered I was out of wicks – I’m talking about real wicks that candlemakers use – not the recycled wicks from Dollar Tree candles I also sometimes use.

Well, I could have gone digging through the trash to find one of the Dollar Tree ones, but then I saw the look on his face, and I had another thought: would a birthday candle serve as the wick for a larger candle?

I dug out a gold birthday candle from our stash, put some hot wax on the end and stuck it in place.

Can you see where this is going?

I then filled the candle bowl with hot wax.

The birthday candle was popping up out of the wax, and I supported it with a bamboo skewer.

The elf is very happy you’re here reading this post, and he seems very excited to see you!

Oddly enough, he didn’t seem as excited after burning for a few minutes.

Okay, let’s shift gears here and simplify things a bit. This was the third candle I made – just before Elfie.

We found a covered bowl in Target Dollar Spot that I thought was an acorn. My babes informed me it was a winter hat.

I still say it’s an acorn.

Anyway, I first pulled off the plastic gasket around the rim of the bowl, and then I stuck one wick in the center. I then filled it with wax, and that was it!

When I light this candle, I remove the lid and prop it against the bowl.

Handan loves her new Christmas candles. They look great as decor pieces, and when we light them, we do so responsibly. That means we only burn them while we’re in the same room, and we don’t burn them for ridiculously long amounts of time.

These candles are safe when used in a safe manner. That means not leaving them unattended while burning and not burning them for extended periods of time. Decorative candles like these should be burned sparingly, so they can be enjoyed for years to come.