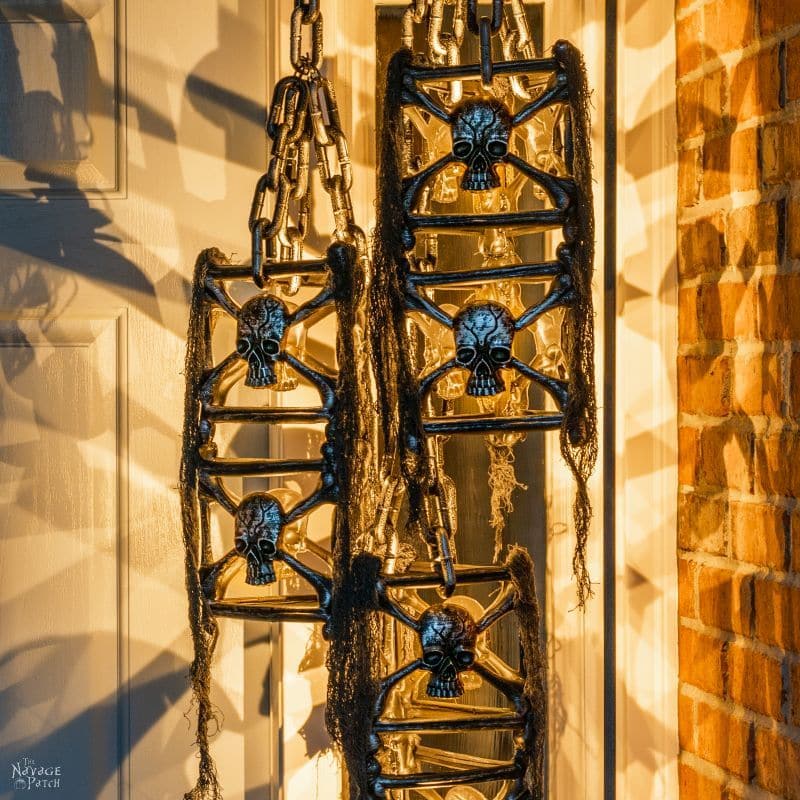 These DIY Dollar Tree Halloween Lights are easy, cheap, and they look like something that would sell for 10x the price in a store!

Well, sometimes you just get lucky I guess.

I mean, there I was toiling away on a spooky Halloween chandelier for my babes when I was informed in no uncertain terms that the lighting I was toiling on was:

You know, when I become supreme dictator of the world, the first thing I’ll fix will be all the ridiculous, redundant and entirely irrational words for home design elements. Why do we need more than one word to describe a light that hangs? Why can’t a chandelier be a pendant and vice-versa? When I’m boss, they’ll all be called hanglights, and the world will be a better and happier place – at least for the men who will be freed from the shackles of trying to figure out what the hell their wives are talking about 90% of the time.

Anyway, as I was saying, sometimes you get lucky. Because even though my first attempt at a Halloween chandelier for our outside front entryway was a big fat failure, it was also a rollicking success!

Apparently I made pendant lights, not a chandelier.

Look, you should really watch the following video to get up to speed. I posted it on Tiktok two nights ago, and, well, it went a little viral. Yay me. I think it’s time I go glove-slap Steven Spielberg and challenge him to a duel.

Though I may not have satisfied my babes’ desire for a a spooky Halloween chandelier (hanglight), I did make something cool and creepy enough to stand as its own Halloween project.

So, two birds with one stone.

Or, victory snatched from the jaws of failure.

I’m still working on the chandelier – and I have to finish it soon, because there are a few hundred thousand TikTok watchers who’ll be calling for my head if I don’t serve up Part 2 PDQ.

But until then, here’s a creepy little appetizer – something to tide you (and TikTok!) over until the chandelier main course.

Step 1 – Cut off the spikes

Since I wouldn’t be sticking the skull fence in the ground, I didn’t need the ground spikes. I cut them off with small crafting scissors, though crafting shears would make the job even easier.

Next, I cut off the four connector tabs – two on each side.

I wanted to make the fence into a prism shape, so to do that I gently worked the plastic back and forth until it could bend easily into shape.

This plastic is a bit brittle, so bending it directly into a prism may work, but it also may break. By gently bending back and forth, increasing the amount of bend each time, I warmed the plastic and allowed it to take a new shape easier.

When in its prism shape, there is one side that is a bit bigger than the other. The bigger side is the one I filled with hot glue and then inserted the smaller side into.

I used a lot of glue in there. And remember, if you live someplace very hot or very cold in October, you’ll want to use high temperature hot glue sticks.

Even with low temp glue sticks you should be okay because this craft uses a lot of glue on the joints, but to be safe, you can use high temp sticks if there’s any doubt, or you can reinforce with black zip ties.

You’ll notice some gaps from the trimming process.

This is nothing to worry about – I easily filled them with black hot glue.

Don’t worry about using too much glue – all will be covered up in the end!

I let the glue cool and repeated the process on another section of fence.

I stacked the two skull fence prisms, and my Halloween light started to take shape. I put some hot glue on the corner with the seam and then worked around to the other two corners, lifting each a little and squeezing in some hot glue.

After letting the glue cool for a bit, I went back around and reinforced each joint with a little more hot glue.

Ready for chains and lights!

I removed 3 sections of 4 links from my Dollar Tree chain and another longer section of links. How long depends on where you’ll hang it from.

Then I connected the three short lengths of chain to the three top sides of the pendant light.

Next, I made loops from black zip ties at the top of each 4-link chain section.

I cut 3 lengths of creepy cloth for each lantern.

I hot glued them at the top corners by putting a little bit of glue behind the joint and pressing the cloth in place.

Then I put a dab of glue at each middle joint and pressed on the creepy cloth.

To keep the chains from sliding around on the lights, I first found the best balance point, and then I glued the first links to the lantern.

Since the fence doesn’t fold into an equilateral triangle, the best balance point for the chains is shown below. The front chain is in the middle, but the back two chains closest to the glued seam are shifted a little bit towards the seam.

This is the backside of a remote-controlled LED tea light. This is the side that will be glued.

This is the front side – this will emit light in all colors.

I attached the lights to the lantern with hot glue. Since these lights unscrew, there’s no issue with gluing them on. I’ll still be able to replace the batteries when needed.

Since the back of the skull is concave, it needs a lot of hot glue.

I attached two lights per lantern to the back of the front-facing skulls.

With the lights installed, our DIY Dollar Tree Halloween lanterns were ready for action!

And while waiting for nightfall, I made one more lantern.

If you like that Halloween gnome wreath hanging on our door, I’ll be posting that tutorial later this week!