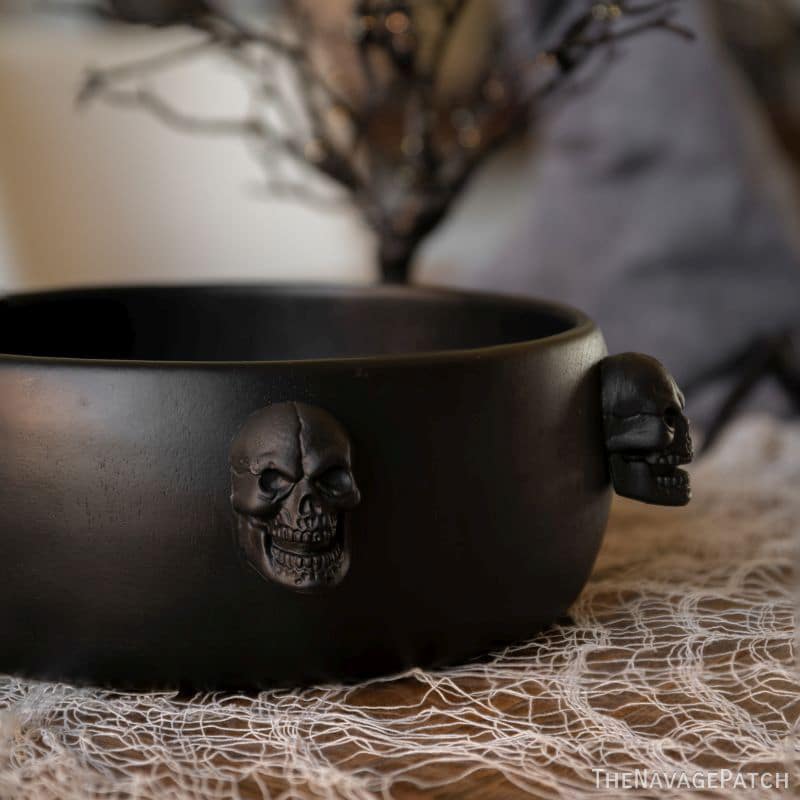 This beautiful Halloween candy bowl is a classy DIY that looks every bit as good as its $56 West Elm inspiration for a fraction of the cost!

Oh, how the mighty have fallen! Just weeks ago I was spraying foam like Rambo sprays bullets and creating hideously beautiful monstrosities like our fire wreath and Vecna’s Bakery. Mine was a world of smoldering bones, smiling skulls and dislocated jawbones. Glowing, pulsating lights – orange and red – were the lights I worked by and the pitiful screams of the damned were my soundtrack.

I was a Halloween DIY machine, and it was glorious!

But now look at me! Busted down to candy bowl duty.

Gah! I was built for blood and guts not chocolate and nuts! Give me back my foam! Arm me with full cans of red and black spray paint. Adorn me with pulsating LED lights and let me create Halloween Chaos!!

I am the Witch King, ruler of-

[Hmmmm…or, you could just make me the candy bowl I saw in West Elm. -Handan]

This is the bowl in question:

At $56, I wondered if the bowl came with its own candy factory or perhaps a timeshare in Cozumel. Well, at least it has skulls. Maybe it won’t be so bad after all.

Check out our Instagram video below before scrolling down to the written tutorial!

Using snips, a hot knife (or even a miter saw), cut off the backs of the skulls. The West Elm bowl has 8 skulls, but we used 6. Totally up to you.

Spray the skulls with flat black spray paint. We think flat looks best for this project, as it matches our bowl, but if glossy is your thing, then go for it!

Here’s a little trick to make gluing hollow skulls a little easier. Instead of trying to carefully lay a bead of hot glue around the rim of the skull and then press it in place before the glue hardens, we like to fill that void with aluminum foil.

I wadded up enough aluminum foil to fill the brainpan. If only it were so easy to fill my own head!

Then I squeezed a bit of hot glue into the skull.

I then pressed in the aluminum foil until it was just below the surface of the cut skull.

This makes gluing the skulls a breeze. I filled the rest of the small cavity with hot glue and pressed the skull onto the bowl.

I used a small popsicle stick as a spacer to ensure I placed them all at the same height.

This method gives you more time to work before the glue hardens and doesn’t allow for the glue to squeeze out onto the bowl.

I glued the 6 skulls in this manner, and that was it!

If your skulls weren’t cut cleanly, an optional final step would be to lay a small bead of black caulk around the skulls to hide any imperfections. The caulk would also make this water-tight in case you wanted to wash it.

Variations: If you don’t have or can’t find a suitable black bowl, you can do the project with any color bowl and then spray paint the whole thing black at the end.

This is a simple project that gives you a classy candy bowl for a tiny fraction of West Elm’s price.

Aren’t the little squid-fingered candy-clenchers in your neighborhood worth it? 🙂

But look, who are we kidding here? You’re going to make this bowl tomorrow, fill it up, set it on the counter and have your own little Halloween feast every night of October!

And hey, a bowl this handsome doesn’t need candy! Perhaps some fruit? Maybe a wallet and keys? The skull’s the limit, as we say around here!

Well, would you look at that! Look whose hand just couldn’t keep away from her beautiful new West Elm dupe Halloween candy bowl!