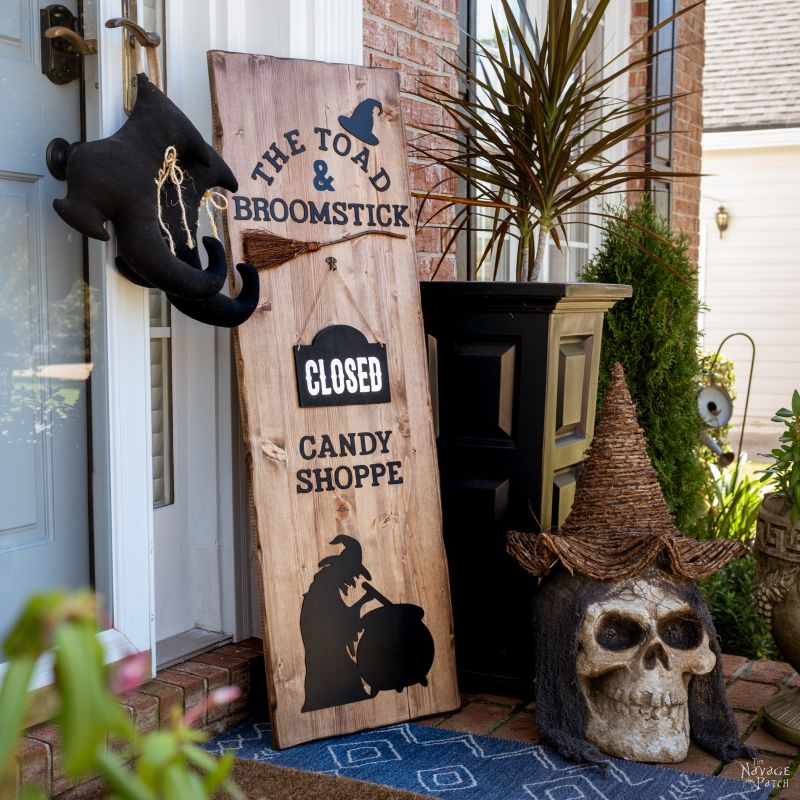 This DIY Halloween Candy Shop Sign is made from mostly Dollar Tree materials and it’s a perfect addition to any front entry Halloween display.

So the Witch of the Patch has been itching for a candy shop sign to either hang on our front door or lean against the house. The idea came to her while she was in her Thinking Room.

No, not the bathroom! That’s where dudes do their best thinking!

My babes does her best thinking in Dollar Tree. You’ve never seen a shopper like Handan in that store, I guarandamntee! I swear to god she picks up every. single. item. in the seasonal decor and craft departments and studies them like they’re some newly-discovered alien species that holds the key to understanding the universe.

Did you think it was even possible to spend an hour in Dollar Tree?

Now, back in Connecticut, Handan’s main Dollar Tree just happened to be a handful of storefronts down from a Total Wine & More. So you know where your intrepid author was during those interminable hours!

Yep, while she meandered the aisles of plastic and glitter in Dollar Tree, I strolled through the aisles of Heaven – miles of gin and bourbon and wine and rum. It’s a grown man’s candy shop!

Fast forward to Georgia, and I’m SOL when it comes to Dollar Tree. None we’ve visited is near a boozatorium, and the one my babes is most fond of (which I’ll admit is the biggest and cleanest Dollar Tree I’ve ever seen) is all on its own!

Those stores are supposed to be just another link in strip mall chain. How dare they open a free-standing store! Where the hell am I supposed to escape to?

Anyway, there we were in Handan’s Thinking Room – she, darting hither and yon like a squirrel hopped-up on fermented acorn juice, and I, drooling at the lips while I counted ceiling tiles.

At some point she did the inevitable: she waved a handful of mass-produced seasonality at me and demanded to know if I had any foresight of my fate.

“Does my babes know what he’s going to make with these? Does he? Hey? Hey? Does he?” she said and deposited the handful into her basket. I spied a wooden witch cutout in the basket, along with a blank wooden sign on a string and several bags of wooden letters.

I squinted at the loon and wiped the drool from my chin.

“No, you silly bugger!” she said, whereupon she fished a hand into the basket and came out with the witch cutout. She held it in the air in front of her. I know in her mind, she was looking at the completed project, but to me it was just a wooden witch cutout with the Dollar Tree picture frame aisle in the background.

Then she held up a bag of wooden letters in the other hand and explained what she wanted.

And then she smiled.

Who can say no to that smile, no matter how loony the squirrel who wears it?

So back home we went, and I promised her I’d get right on it.

That was a couple of weeks ago.

I’m happy to report I finally did get on it and with my babe’s help, we’ve made a fun little Halloween prop to lean against our entryway for the month of October.

So I recently discovered a life-changing item at Lowe’s: the edge-glued panel.

Until September 2020, I’d been building shelves out of pine 1x12s (which are only 11 1/2 inches wide) and putting up with all of their warping and cupping.

And I was about to do it again for this project! I was planning on buying a 1×12 board, even though the witch was 12 inches wide. But as I scanned the lumber in Lowe’s, I discovered a section of edge-glued panels – they come in 12 inch (actually 12, not 11 1/2), 16 inch, 20 inch, and 24 inch widths and varying lengths from 4 feet and up. The best part? No warping and cupping!

I snatched a bunch (1 for this project and some bigger ones for some laundry room shelves I’ll be building) and made for the exit. Handan was going to be psyched!

Okay, with the edge-glued panel, we were ready to rock this withy candy shop sign.

First, we laid out our letters and cutouts so we had a rough idea of how it would look.

At this point we were still planning on using a Dollar Tree broomstick. Those Dollar Tree packs of letters don’t include an ampersand, so for The Toad & Broomstick, we were thinking of either cutting one out of adhesive vinyl with Cricut or drawing it on with a marker (we chose Cricut). We also used Cricut for the Open/Closed letters  on the flippable sign.

When we were satisfied with the layout, I took the panel to the basement for sanding and staining.

I used a random orbit sander to weather the edges a bit and give them a little scalloping. This is totally optional.

I used Minwax Special Walnut – it’s Handan’s favorite, and she basically wants it on everything – including pancakes. [I do! – because it’s the best brown. Not too dark or not too light. It has a little warmth, but it isn’t yellow or red. The perfect wood stain color ever! – Handan]

I filled the holes in the hat and witch with spackle.

Then I sprayed everything flat black. My babes was upstairs in a virtual meeting while I painted, so unfortunately, you won’t be able to see any glorious action shots of me valiantly spraying the witch with paint.

I laid the letters back in place and used a straightedge for the straight lettering.

When I had the layout just right, I glued the letters, one-by-one.

I started with the finger-smear technique of glue-spreading, but this soon became a sticky mess. Fortunately, my babes isn’t the only one with a brain around here. Occasionally the wad of old chewing gum between my ears belches to life and excretes a good idea. After the first few letters, I switched to brushing glue on with a small paintbrush.

To make sure I put glued letter back in the right spot, I used a razor blade to mark its position.

This was my babes’ idea. After the “spread the glue with a paintbrush” idea, my little wad of chewing gum was all tuckered out and in need of rest.

I cleaned up the squeeze-out with the covered part of a razor. Later, I used a thin wooden skewer with a tiny bit of blue tape wrapped around the tip.

Sometime between gathering our initial supplies for this project and actually starting it, Handan and I found these mini scented brooms in Home Depot. They were the perfect size for our Halloween candy shop sign, so we bought a bunch – one for the project and the others to sniff.

That night on our walk, we gathered sticks for the broom handle. I found what I thought was the perfect stick, but then a few minutes later, Handan announced to all of Gwinnett County that she had found a better one. I looked at her scrawny twig and scoffed. It was nothing compared to my majestic branch! She just smiled and said, “We’ll see when we get home whose is better.”

I’ll give you three guesses whose stick won the day.

The stick shown above is the one my babes found. My branch was disqualified.

Anyway, I put a little hot blue on the broom and then stuck Handan’s stupid stick into it.

I again used hot glue to secure the broomstick to the board.

Carrying on with gluing the letters, I occasionally had problems with the ends not staying down. A little blue tape solved this as it worked like a custom clamp.

After all was glued, I cut letters for the Open/Closed sign with our Cricut Explore Air 2 and adhesive foil. I also cut an ampersand from a scrap of black adhesive vinyl.

For the final step, I took the sign outside and sprayed it front and back with several coats of clear matte sealant.

The Halloween Candy Shop is closed. (But it’ll be open on Halloween!)

Oooops! Wrong wreath! My babes busted in the act of taking down the fall wreath and putting up the Halloween one!

There we go – much better!

Do you remember our eyeball orb wreath? It looks great against our new door color.