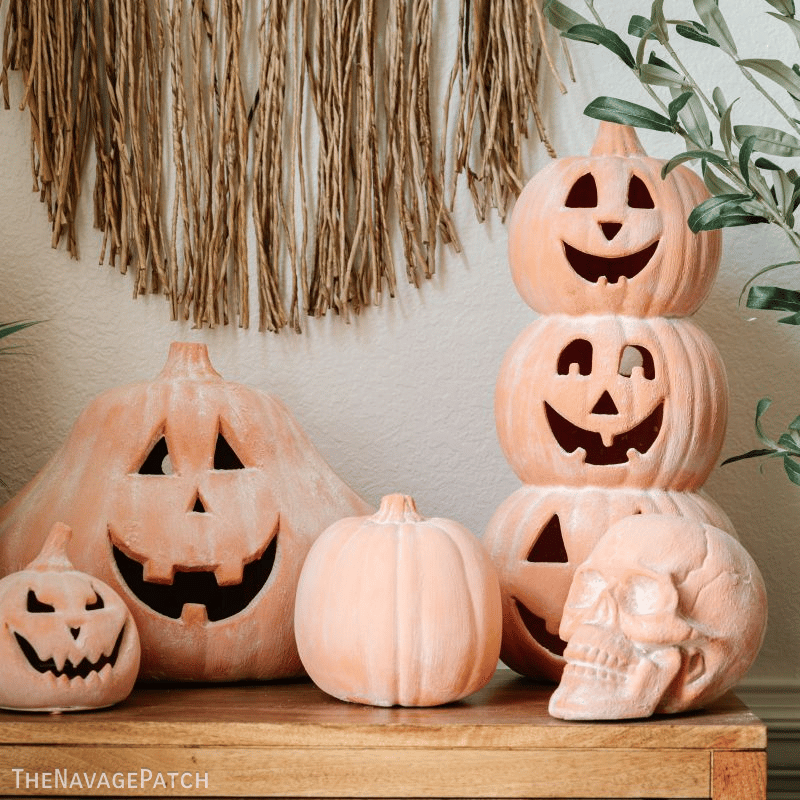 You can’t flip open a smartphone these days without running across them. They’re pretty much everywhere, and every smiling Suzy Sawhorse on Instagram and Debbie Do It on TikTok is making them and proclaiming them to be “just the cutest thing EVER!” In fact, (they’re quick to inform) they’re also “super easy, super fun, super cheap,” and pretty much all-around SUPER! And would you believe that each and every one of them was just “so excited to share this with you?”

Well, madam, something this monumentally super deserves a glance from Handan and me here at the little old Navage Patch.

I’m talking, of course, about those Pottery Barn terracotta pumpkins that have half the internet all hot and bothered and the other half scratching their heads wondering what the big fu@%in’ deal is.

In case you’ve been vacationing on the dark side of the moon for the past month, these are the pumpkins that started the all the fuss.

You should all know by now how much my babes loves a good dupe, and these terracotta pumpkins were easy prey.

We’re generally not trend-jumpers, but this one was just too easy not to share, because it’s pretty amazing how good you can make a Dollar Tree pumpkin look (or any other plastic pumpkin) with just a few simple ingredients.

Step 1 – Mix up the perfect paint

My babes spent hours in the lab reverse engineering the exact color used by Pottery Barn, and she nailed it right on its pale pumpkin head!

If you want your pumpkins to have the perfect sun-kissed terracotta look of the Pottery Barn originals, you’ll need to head to your nearest Home Depot with the following two paint codes:

Mix the colors using 1.5 parts orange for every 1 part yellow.

The difference in painting technique is that here I brushed long vertical strokes with the thickened paint instead of stabbing the brush to get a rough stone look.

This part is easy peasy pumpkin squeezy – just glop that sh!t on there and start brushing up and down!

I’ll be showing you how to make terracotta pumpkins with this lumpy fellow from Lowe’s. We also terracottafied pumpkins from Dollar Tree and a candy pail from Walmart.

Before we begin, I’d like to take you behind the scenes of a Navage Patch craft video shoot for a moment. My camera(wo)man is also the director, coach, kibbitzer-in-chief and stylist of The Talent (aka Yours Sufferingly).

Shortly after starting this shoot, the stylist decided my hair was just too cockatiel, so she fixed it on the fly…all while filming.

With my hair now fully-functioning, I got back to the matter at hand – painting my pumpkin. I slapped the paint on thick and brushed up and down.

By the way, if you want this exact pumpkin, you can find him here. Act fast, because they will run out!

Even though I thickened the paint, it still would want to level itself if left unattended.

After coating the entire pumpkin, I let it sit for a few minutes (how long you let it rest depends on how thick you made it, temperature, humidity, nearby fans, etc), and then I went back and continued the with the vertical brush strokes.

As the paint starts to dry, the brush strokes will remain and add beautiful texture to your terracotta pumpkin.

After reaching the texture I wanted, the paint was already getting dry. This is the perfect time to add flour. Yes, flour. First person to make a pumpkin bread joke gets 50 lashes with a wet noodle.

I sprinkled a couple of handfuls over the top and around the sides.

Then I brushed it lightly with a clean chip brush.

To get flour onto the bottom half, I flipped up the excess on the lazy susan with the brush.

How much flour you brush off or leave on is up to you, but we think they look best with most brushed off – that still leaves you with a beautiful faux terracotta pumpkin. But we also liked the look of having some heavier-floured areas on some pumpkins.

Now, with all this flour, we’re going to need to seal it in, otherwise it’s going to rub off with every touch.

Okay, first the truth. Anyone out there claiming they sealed it with clear matte acrylic sealer is completely full of sh!t. We tried it, and the sealer entirely erases the flour. Entirely.

Fortunately, we never throw things away, so I had some fixatif left over from my art days back in the mid 90s. Fixatif is meant to be sprayed on charcoal, pencil and pastel drawings. It sets those media in place so an errant brush with a hand or piece of clothing won’t smudge, smear or send half the artwork spilling off the page. It sets, but it does so gently, so that the drawing can be re-worked at a later date, if needed. Fixatif is not nearly as strong as acrylic sealant, but it did the trick for these terracotta pumpkins.

I gave each pumpkin a couple of light coats of fixatif, and I gave the ones with heavier areas of flour a couple more coats after that. Fixatif dries quickly, and I was able to recoat after a few minutes.

Now, smart madams such as yourself are probably thinking, “but couldn’t you use acrylic sealer after the fixatif? That would work, wouldn’t it?” It is an excellent question and one we thought of and tested ourselves. Unfortunately, the results were sub-optimal for both Rustoleum matte acrylic sealant and Mod Podge matte acrylic sealant.

First, the Rustoleum. After fixatif, I sprayed half of this skull with Rustoleum. Here is the unsprayed side:

And the sprayed side. Only the thickest areas of flour remain.

And here’s the Mod Podge acrylic sealant. First the unsprayed side:

And the sprayed side:

Final thoughts on sealant. Fixatif is best, and I like it on its own. But if I had to follow up with a traditional acrylic sealant, I’d go with Mod Podge – it seemed to leave more flour than Rustoleum.

Okay, enough blabbing, let’s get on with the beauty shots!

Just look that incredible texture! Unless you’re holding it in your hands, you wouldn’t guess these are faux terracotta.